This post has been a long, long time in the making.  I originally heard about Cheese Louise over two years ago, in a Sac Biz Journal article from March 2013.  It was not that long prior that Extreme Java Jungle Cafe closed it’s doors.  However, they seemed to be joining forces and planned to share the space across from the Post Office on Vernon St.  Months went by with no update or observable progress. Meanwhile, the only other Cheese Louise, located in Downtown Sac, shut down.

Eventually, Java Jungle posted a message on Facebook saying that they were not going to reopen with Cheese Louise because it was not working out between them.  It seemed that Cheese Louise would go it on it’s own.  At least another year passed with the “coming soon” sign in the window, yet nothing changed.  I gave up on it quite a long time ago, but at the beginning of this year, out of the blue, they actually opened!  However, it was with a big caveat, they didn’t have a food menu yet.  It was basically just a coffee shop with pastries as far as I could tell.  That went on for about 5 months I think.  Only very recently have they started serving food.  And with that, I finally visit this gourmet grilled cheese shop.

I headed in for lunch yesterday right at noon.  There were only a few other customers in at the time.  The space felt wide open.  When Java Jungle was here, it was a maze of funky and mismatched furniture.  It’s much more uniform now, but feels a bit sterile and much, much less cozy (save for a couple of couches).  The fireplace that sits in the center of the right side of the dining room feels out of place now, without some armchairs to enjoy it in.

As I waited in line I glanced over 2 of the 3 blackboard menus they had hanging over the counter.  The first listed some coffee beverages, the 2nd some sandwiches, and the 3rd was blank.  There were no descriptions so it was kind of difficult to figure out what to get.  Once I was next in line though, I could see a very rough photocopied paper menu that detailed the sandwiches better.  Below is that menu. 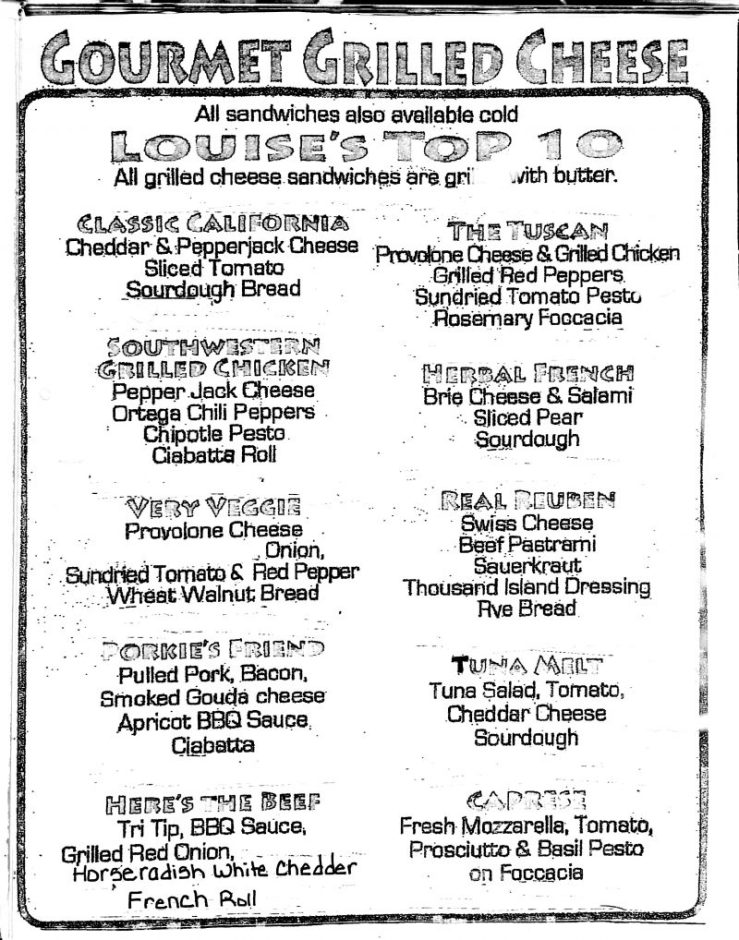 There was a little board over the the left that listed a few smoothie flavors, strawberry, mango and peach.  In a display case next to that was a variety of pastries.  I saw some brownies [$1.25] in there so I figured I’d try one of those out for dessert.  I decided on the Porkie’s Friend (pulled pork, bacon, smoked Gouda cheese and apricot BBQ sauce on a ciabatta bun)[The blackboard said $6.95 but my receipt only shows $4.95…].  With it I got a side of french fries [$1.25] and a mango smoothie [$5.95].

My smoothie was ready a few minutes before my food, which took about 15 minutes from when I paid.  I went up to the counter to pick the smoothie up.  It was fresh and tasted great.  It wasn’t overly sweet and had just a hint of a tartness to it.  My order was brought out to me as I tasted it.  The sandwich was more like a panini and less like a grilled cheese. There was a decent amount of Gouda in it though, enough to be able to taste it’s rich, smokey flavor in every bite.  The pork was tender and mixed in well with the apricot bbq sauce.  That sauce really dominated the sandwich.  It was incredibly sweet.  Traces of bacon surfaced here and there, but it was so overwhelmed it might as well not even been there.  The BBQ sauce and Gouda were the core of this sandwich. 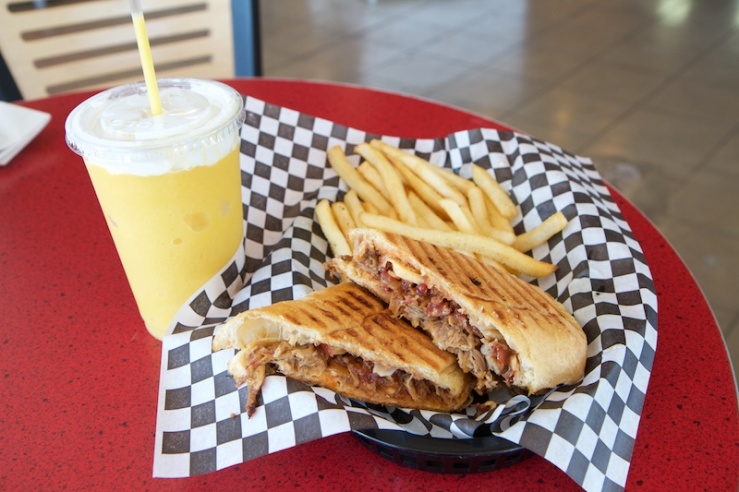 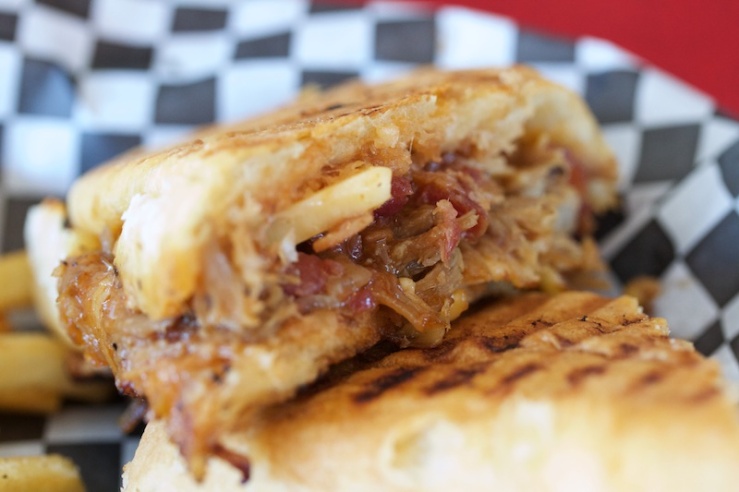 The fries were soft with a lightly crisp exterior and they were generously salted.  Without the salt I would have needed some ketchup but they made due as they were.  I saw another customer walk up to the counter and get a little container of ketchup, probably for their fries.  They don’t keep anything other than napkins at the tables.

Finally I dug into my brownie a little bit.  I was close to full so I just had a few bites.  The consistency was perfect, it was nice and soft but slightly dense.  Unfortunately it wasn’t very sweet.  Rather it was like a darker, more bitter chocolate.  Not really what I had in mind.

So, overall kind of a weird experience.  The sandwich and smoothie were good.  I probably would have preferred the sweetness be dialed back a bit on the BBQ sauce though.  It didn’t feel like a grilled cheese to me, and I think that’s the disappointing thing about this, not to say it was bad, just not at all what I’ve had in mind for the last 2+ years when I thought about gourmet grilled cheese sandwiches coming to Roseville.  I think I’d probably just go get the amazing grilled cheese at Yard House next time I’m in the mood for one.