I have an occasional habit of driving aimlessly in search of lunch on the weekend.  Last weekend this happened, and although I eventually settled on MooYah in Rocklin, the route I took in the end was less than direct, as the GPS trail below shows.  I noticed this little burger shack along the way that had me extremely curious though, and today I went back to check it out.

This is Taylor’s (or Taylor’s Corner), aptly named as it sits right on the corner of Sierra College & Taylor in Loomis.  I find these type of places fascinating for some reason, probably because they are few and far between, although I know they’re not always very special (see Sam’s Classic Burgers).  This one I had high hopes for.  I think it was because they had a couple of distinctive features that set it apart from others.  They are open early for breakfast and they have a massive list of shake/malt flavors. 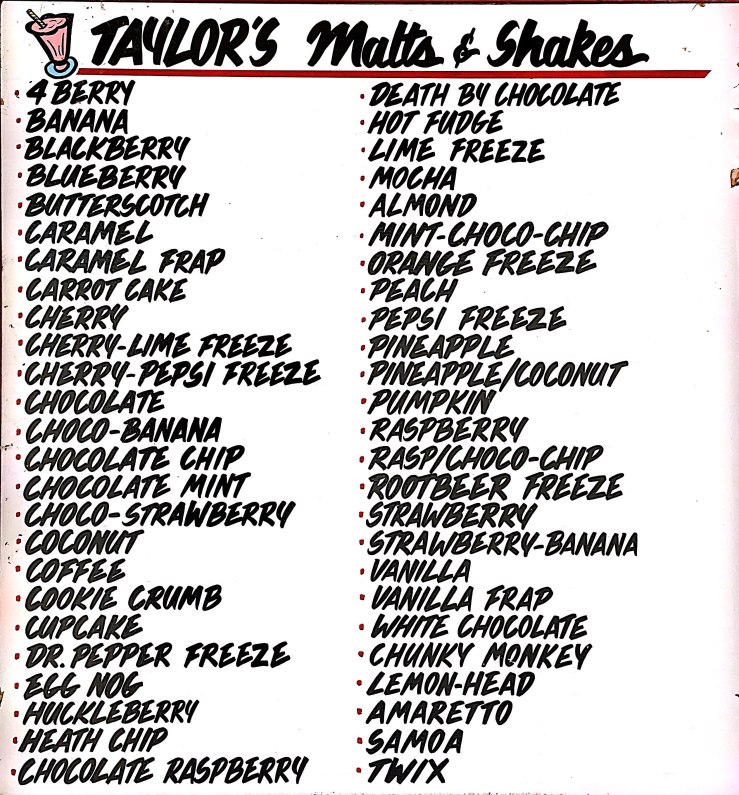 I pulled in at around 11:30 and it was a little slow, just a few customers at the time.  The building is small and there is only outside seating.  Despite the heat of our Summers it seems like it’s actually a nice place to eat.  They have a big carport built over 4 standard picnic tables, and the other 5 tables towards the back end all have umbrellas.  On top of this, the place is set up with misters.  Today they only had the misters running on the main building itself, but with a breeze I was still getting a cool spray now and then all the way at the furthest table. 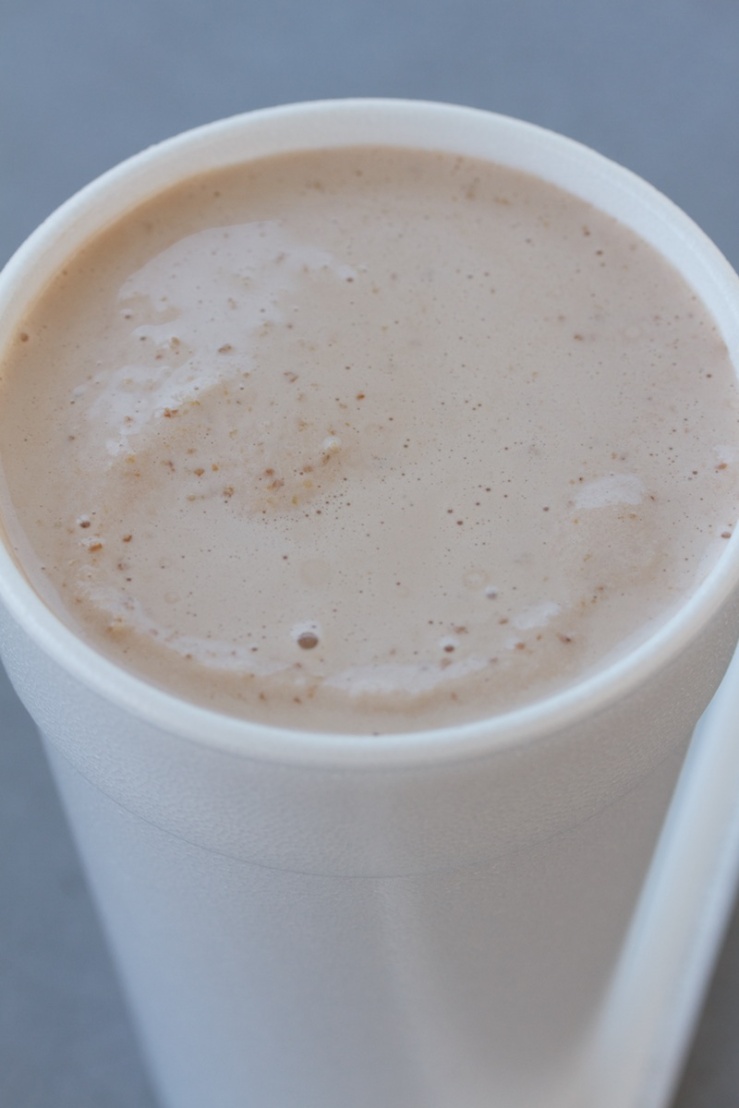 I took several minutes to look over the menu, including the insanely long list of shakes. According to their website they are constantly changing and adding to it!  I finally settled on a Double Bacon Cheeseburger (mayo, pickles, lettuce, onions, cheese, bacon, ketchup & mustard)[$8.39], a side of Garlic Fries [$3.99] and a S’mores shake [~$3 or $4, price was not listed].  It was a bit more pricey than expected with my total coming to $17.49. 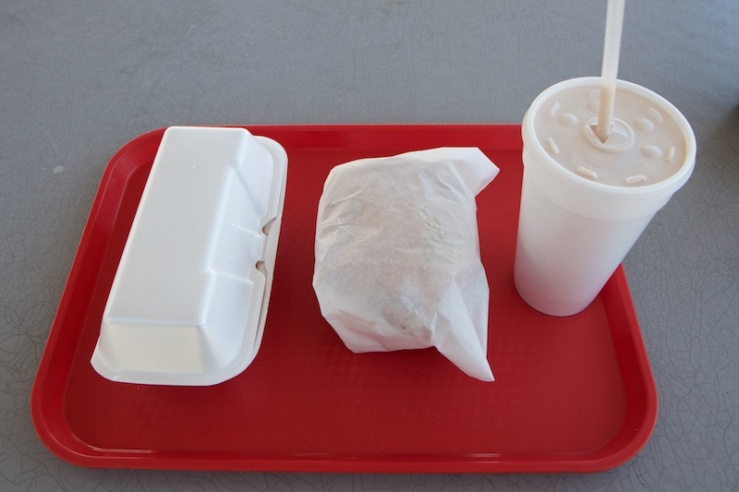 The wait was not insignificant.  My shake took about 7 minutes and was brought out to me, and my food followed about 9 minutes later.  The shake was fantastic.  It was smoothly blended and had a chocolate and marshmallow-y flavor with a hint of graham cracker.  Like with Sam’s, the styrofoam cup kept it very cold for a while. 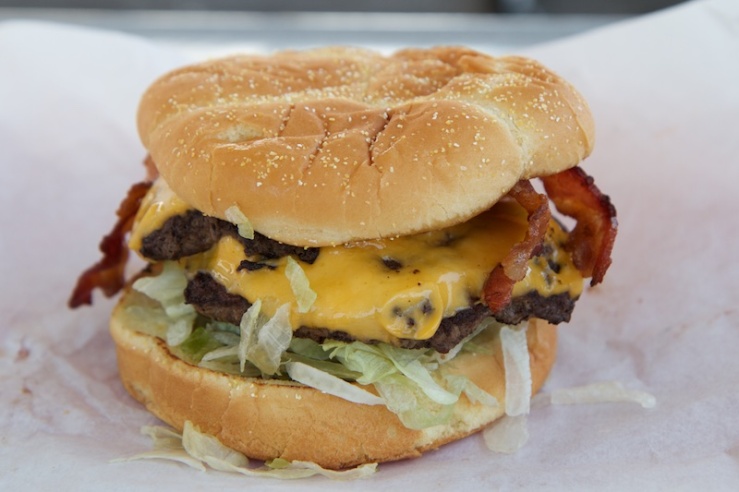 My burger looked pretty great.  Lots of melted cheese and two fairly thick pieces of delicious-looking bacon stood out.  Underneath the slightly-thicker-than-In’N’Out patties was a small amount of shredded lettuce, a few rings of white onions and three pickles.  The sauces were light and only added hints of their flavors overall, letting the beef, cheese and bacon shine.  If they told me the bacon was cooked to order I would probably believe them.  It was easily some of the best bacon I’ve ever had on a burger (fancy restaurant burgers not included).  It was crisp, but not too crisp, and still had little bits of juicy fat to them.  The bun was perfectly soft and could have been baked fresh that day for all I knew.

The fries were probably the weakest link out of the meal, and that’s not even to say they were bad!  The were extra golden and crispy, which I like in fries.  There was a whole lot of fresh minced garlic in them, though it was not apparent at first.  Much of it was in clumps down below the topmost fries.  It was tasty, I just feel that they were a buck or two overpriced for what they were.  I’d probably just get standard fries in the future. 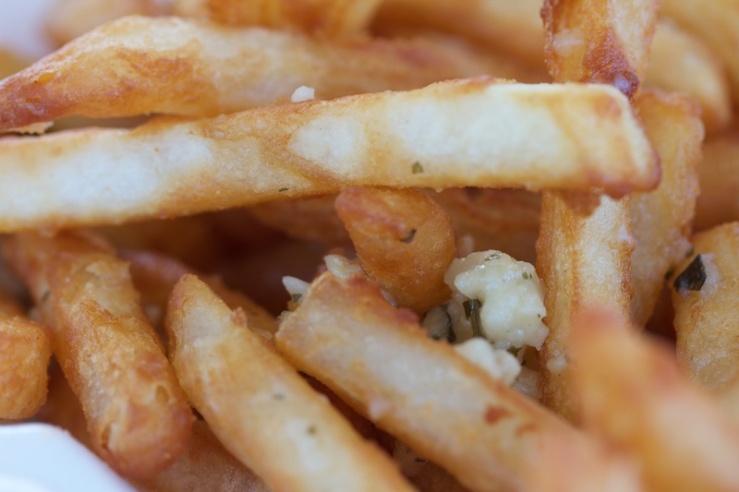 So overall, quite impressed with this little hidden (to me anyway, since I don’t think I had ever driven that stretch of Taylor before last week) gem just to the north of Roseville.  My meal was quite filling.  The prices were just a bit high, I feel, and the wait was fairly long, but I certainly enjoyed it, especially the awesome shake.