Following our beer flights at Boneshaker Public House yesterday, Justin and I headed just a couple blocks down the street to have lunch at Moo Moo’s Burger Barn.  This is located at Sunset and Stanford Ranch.  They have only a few other locations including two in Stockton and one in Lodi.  As the name implies it’s a burger restaurant.

The name makes it hard not to think of one of my favorite burger places nearby, MooYah Burgers.  The name is about all they have in common though.  Rather than the fast-food ambiance in MooYah, this is a table-service style restaurant.  It was rather busy at 1pm, so I only have one little photo to share of the inside which shows some counter seating from the main entrance.  It’s mostly booths and a handful of tables/chairs.  The booth walls are relatively high so you don’t feel like you’re right next to people.

Our server, Calvin, was pretty great.  He realized we had never been here before and laid out some of his favorites, as well as the more popular burgers, and described the Moo sauce to be “like 1000 Island dressing, but better.”  He had a good energy level and a sense of humor, nodding and saying “extra lettuce and tomatoes” as he wrote down Justin’s order of a Double Moo with cheese and no lettuce or tomatoes.  (Double Moo: Double the Beef, on a Sesame Seed Bun with Moo Sauce, Lettuce, Tomato and Red Onions)[$10.05].

I ordered the Flamin’ Moo (On a Kaiser Bun with Pepper Jack Cheese, Bacon, Grilled Onions, Ranch Dressing and Topped with Regular and Battered Sliced Jalapeños)[$10.25] and added avocado for $1.25.  On Calvin’s suggestion I substituted Moo sauce for the ranch.  Both Justin and I opted for the beer-battered fries as our sides.  Ordering went very smoothly.  The wait was a bit long though, about 20-25 minutes.  When our burgers came we were ready to eat.  Justin’s burger was long gone within a couple minutes, as is tradition. 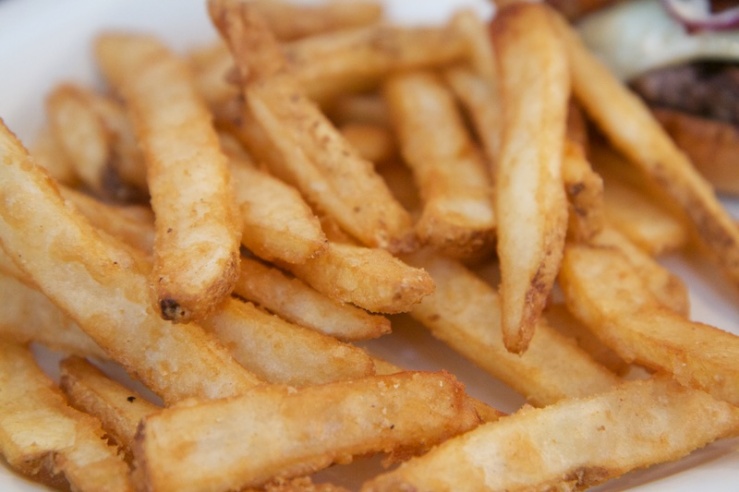 The fries were very good.  They brought out some ranch in little containers for us early on, and I assume this was for the fries, but they really didn’t need anything at all..  They were piping hot and nice and crisp on the outside.  They were basically steak-cut-sized fries, so on the inside they were still soft.  I plowed through all of these before I even touched my Flamin’ Moo.  The burger itself was piled high with jalapeños.  I squeezed the bun down and went to work.

The beef patty was cooked well done.  Justin commented we weren’t asked, so he wondered if you could get it cooked differently or if they just do well.  The beef was fine, nothing particularly noteworthy.  The toppings are what made this burger.  I am glad I added the avocado, because it definitely helped tame the jalapeños heat a bit.  As I just mentioned above, they were plentiful here, both deep fried and grilled varieties.  They were exceptionally flavorful and hot, which makes me think they probably have them soaked in a spicy brine to maintain consistency.  I doubt it would be so hot if they were fresh.  Indeed, my mouth was burning pretty good while eating this, and even for a short time afterwards.  The other toppings, while masked somewhat by the peppers, were still very good.  The avocado was soft, ripe and bright green and the bacon crispsy.  The grilled red onions must have only been grilled very lightly because they still had some snap to them.  I only got a taste of the Moo sauce early on before my mouth caught fire.  It seemed pretty much like typical 1000 Island though.  Perhaps I would be able to notice more of a difference on a simpler burger. 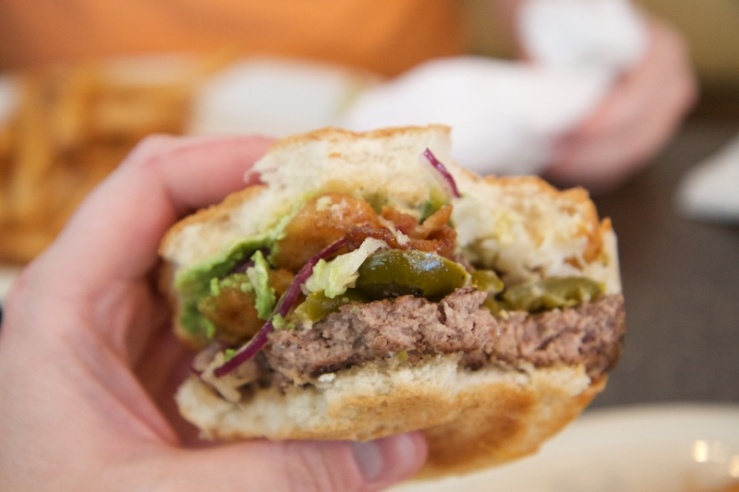 Overall I definitely enjoyed Moo Moo’s.  I do hope that the long wait is not typical of them.  Aside from that, the food and service was quite enjoyable and I could see myself returning. 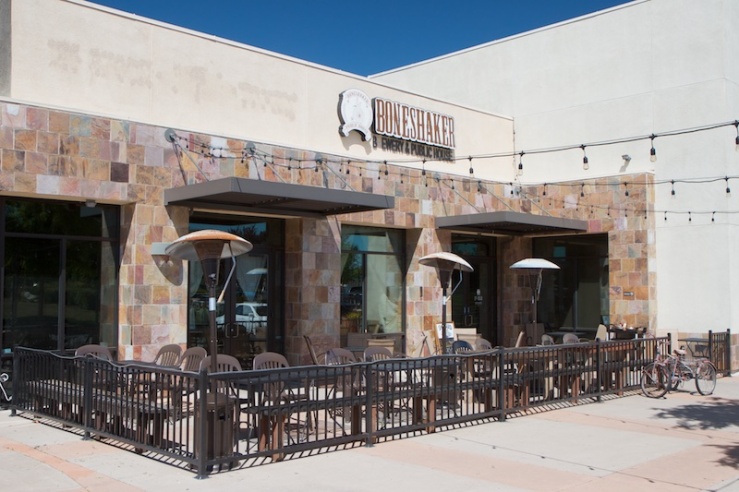 I’ve long wanted to mention Boneshaker Public House here, and today seemed like a good opportunity.  Although I did not eat here today, rest assured their house mac & cheeses (all of them) are incredible.  They also offer pizzas and appetizer-type options.  Check out the current menu as it was today.  I met up with my friend, Justin, at 11:30 for today’s lower-key dark beer event, “Black Beer, Bright Sun.” 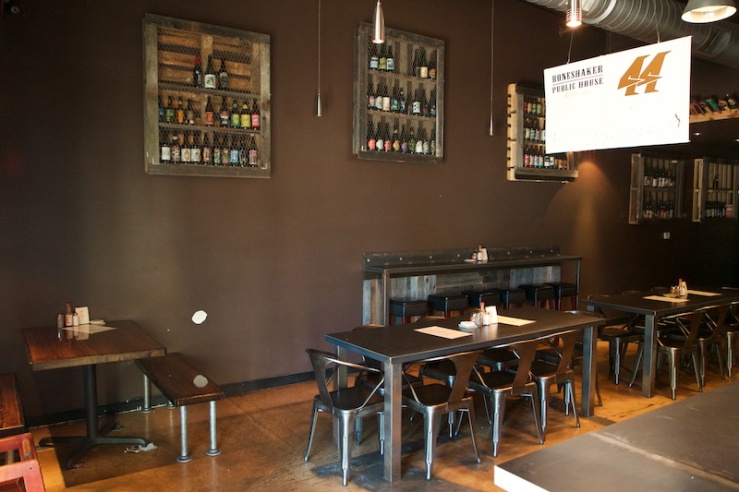 Boneshaker is one of a few craft beer bars in the area (Final Gravity, Porter’s House of Draft and Craft Beer Vault being the other noteworthy ones that come to mind).  They are located at the corner of Sunset Blvd & Park Dr in Rocklin.  They carry a constantly changing array of craft beers on draft and in bottles.  Several times a year they have special events featuring delicious and harder to find special release beers. I am usually attracted to ones with darker beers, such as imperial stouts aged in bourbon barrels. 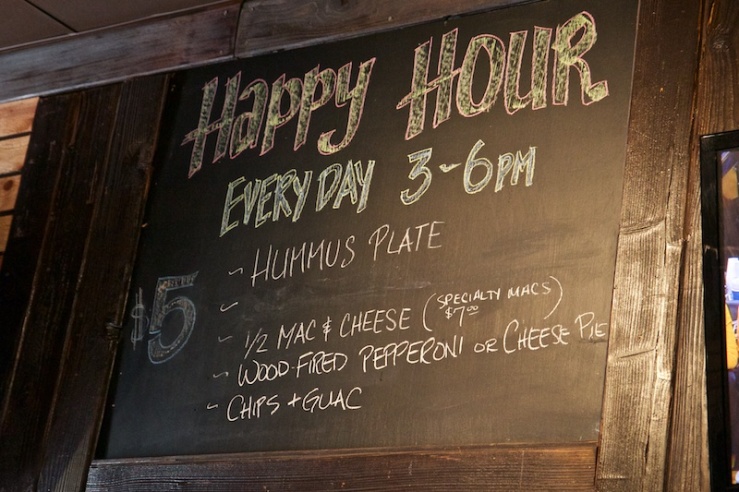 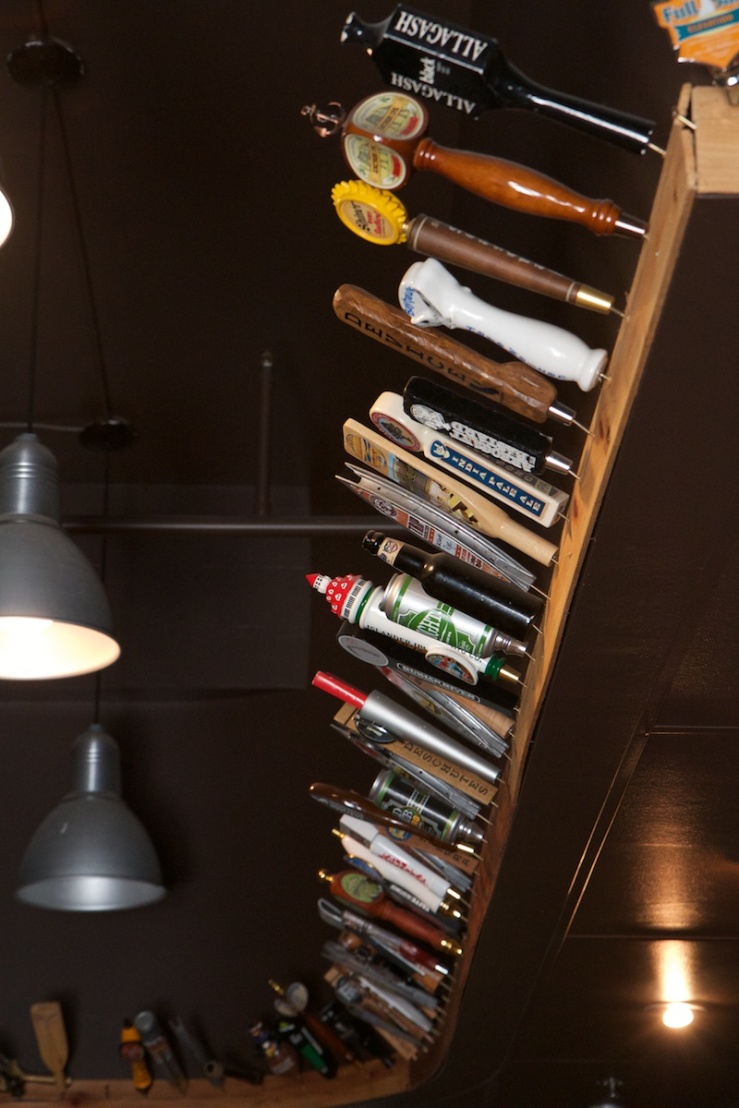 They expanded a while back and have a decent amount of seating both inside and out.  Inside is a fairly dark (especially when walking in on a sunny day like today, it takes some time to adjust), modern-rustic ambiance.  You order beer and food up at the bar and take a seat anywhere. 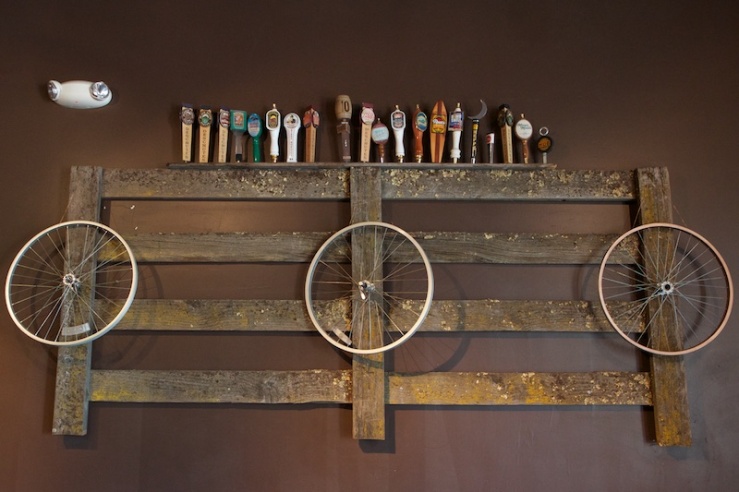 Today we ordered a couple of flights to try a variety.  They had 3 preset ones which consisted of:

We ordered B & C.  Each was around $13 for something like 4-5oz pours.  There was a slight mixup and so we were given an extra glass of something, though neither of us really figured out what it was.  Of all of these, the Four Seasons Peanut Butter Stout and the 404 Scytale really stuck out to me as the best, most unique of the bunch.  A peanut butter stout sounded really weird, but it didn’t really have a peanut butter flavor to it.  It was fairly sweet and instead had a flavor and aroma of cake frosting. 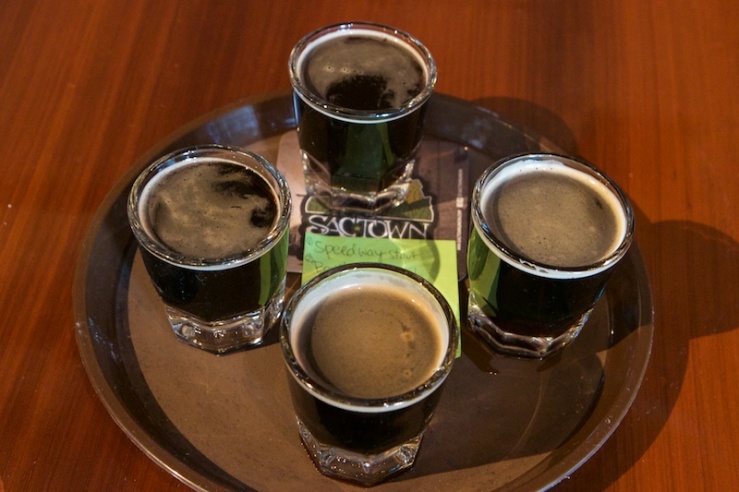 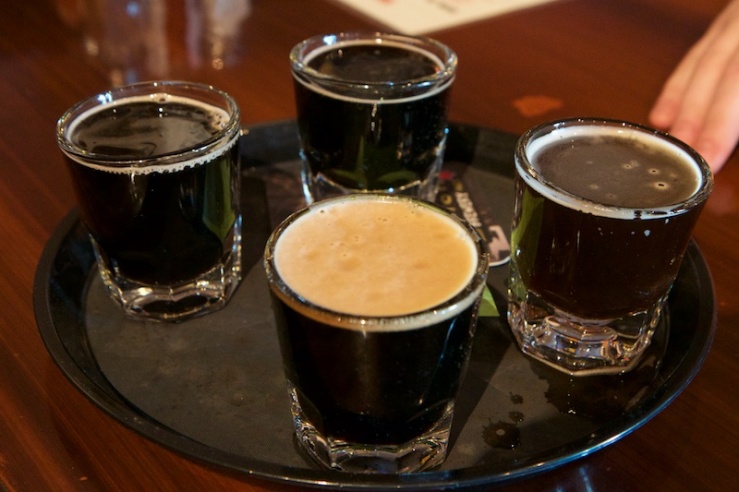 Overall it was a decent tasting.  Nothing like Final Gravity’s annual Stouterday in December, or some of the more impressive lineups Boneshaker has from time to time, but enjoyable nonetheless.  It was nice to be here when it wasn’t standing room only though, which seems to be the case on those particularly special days.

We headed off to Rocklin’s Moo Moos Burger Barn for lunch afterwards, which I’ll have a separate posting about probably tomorrow. 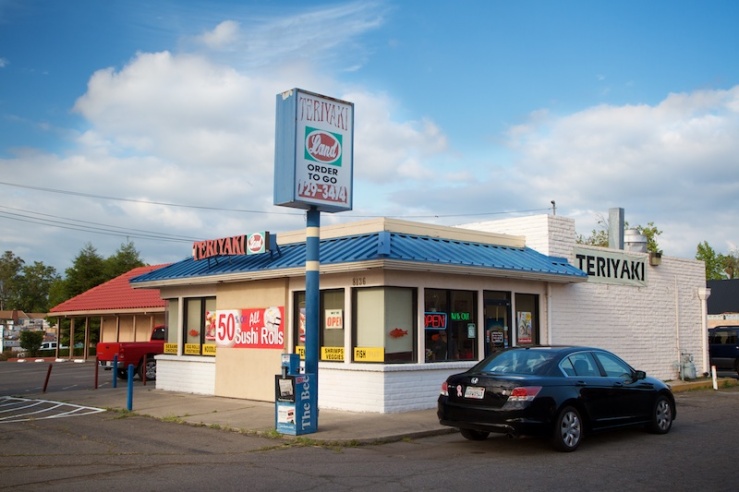 Today I decided to try out Teriyaki Land on Auburn at Walnut, near Les Schwab.  I’ve never thought much of this place, other than being curious that they seem to serve fish & chips in addition to teriyaki and sushi.  Like most sushi places, they advertise 50% off all rolls.  This is such an annoying gimmick, particularly since nearly everyone uses it.

Being hungry and looking forward to it earlier in the day I popped on Yelp briefly to get an idea of what I was going to see.  There aren’t many reviews but it seemed to be a very polarizing place with mostly 5 or 1 star reviews.  I skimmed the restaurant info and was taken aback by the ambiance category of “divey”.  It makes sense, yet until now I’ve never thought to use that word to describe anything but a bar.

I walked in at 5 and the place was deserted, save for a guy standing outside that followed me in who I was half expecting to ask me for money, but instead he was grabbing his order to go (way to jump-to-judgement, Sean!).  A woman was waiting by the counter and greeted me immediately, waiting with a pen and paper to take my order.  Felt very much like Anchor’s Fish & Chips so far.  I had to go over the menu for a minute or two first.  Wanting to sample both sides of the menu, I ordered the Teriyaki Land Special Teriyaki Combo (One choice of teriyaki chicken, beef or pork w/ rice, noodle, salad & soda)[$8.99] and also the Pink Lady roll from the Deep Fried Special Rolls section (d.f., spicy tuna, avocado, crab, tobiko, eel sauce)[ $6.25 all rolls are half off, remember?].

I took a seat in the quiet dining room.  The woman and, presumably, her husband worked to prepare my order, making the only sound aside from some traffic noise coming in through a propped open side door.  There was no music, so I listened to a podcast and snapped a couple photos to pass the 10 minute or so wait.

She called out the items of my order to announce that they were ready.  I retrieved the bento box with teriyaki combo and a tray with my sushi roll, it’s pieces arranged in a neat circle.  She mentioned to the utensils to the right and I grabbed a fork and some chopsticks.  She asked if I wanted sesame seeds and then sprinkled some on with my go ahead.

Everything was piping hot, including the roll since it was deep fried.  The roll came with the usual wasabi/ginger, but also included a little dish of a slightly spicy, probably mayo-based sauce.  I really liked that it came on the side so I could use as little or as much as I wanted, which I did experiment with from piece to piece.  This roll was really good.  It was perfectly crisp on the outside and the spicy tuna really came through nicely, even though there didn’t seem to be a whole lot in it.  The avocado was actually the biggest percentage of the center and was nice and ripe. 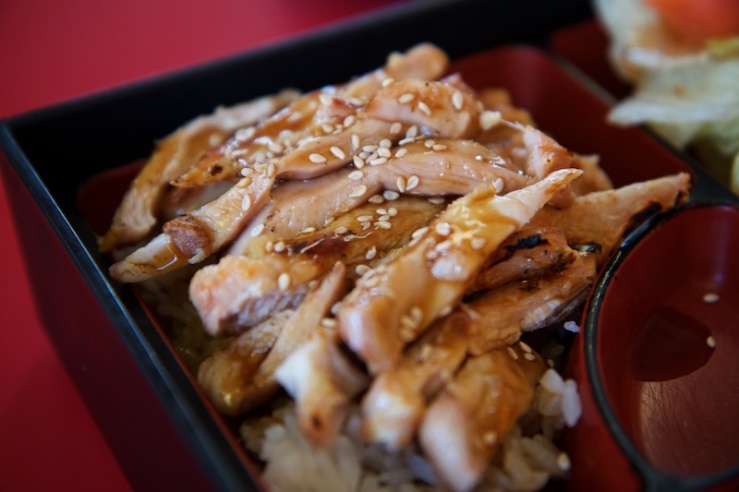 The teriyaki was pretty great, particularly the noodles it came with.  They were flavorful, hot and even had a bunch of dark chicken meat bits mixed in.  The white meat chicken was very tender and moist.  The salad was really the only thing that I wasn’t super enthused about.  It wasn’t bad, just not anything special.  Lettuce was fresh and crisp, yet the dressing was just kind of boring Italian.

The service was minimal, but the woman seemed very nice and happy to serve.  Despite it’s shabby appearance, this place delivered.  I will definitely return for some pre-bowling dinner.