I can count on one hand the number of Cheesesteaks I’ve eaten in my life.  I’m trying to remedy this.  Last week my friend told me about the Cheesesteak Grille on Sierra College by Douglas, over where the Jukebox used to be.  I had no idea there was anything in that little strip mall food-wise.  I told him about Milo’s, which I liked.  He went there for lunch but wasn’t too impressed, so this Friday he brought me to this one to show me a great cheesesteak. 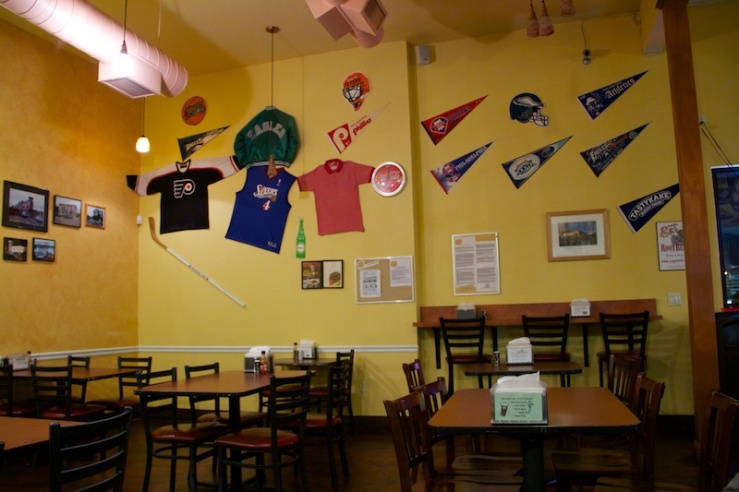 We arrived at around 7 and other than a largish group that was hanging out and winding down they were empty.  The menu is pretty big and had lots of different kinds of cheesesteaks.  I was tempted to go with the traditional, but the Blue Ribbon caught my eye and there was no turning back.  I added some onion rings and a standard soda to make it a combo.  I say standard soda because they have a pretty big selection of  gourmet and specialty bottled sodas & drinks.  They also have many beers available in bottles as well as some on tap. 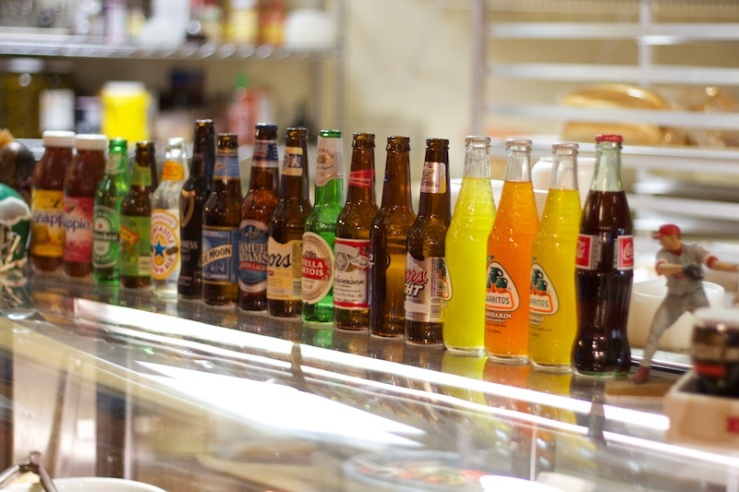 Along with the cheesesteaks, sides and beverages, they also offer a selection of salads including Greek, Macaroni, Pasta and Fruit.  Those were the ones on display, the menu also listed Cesar and Cobb salads. 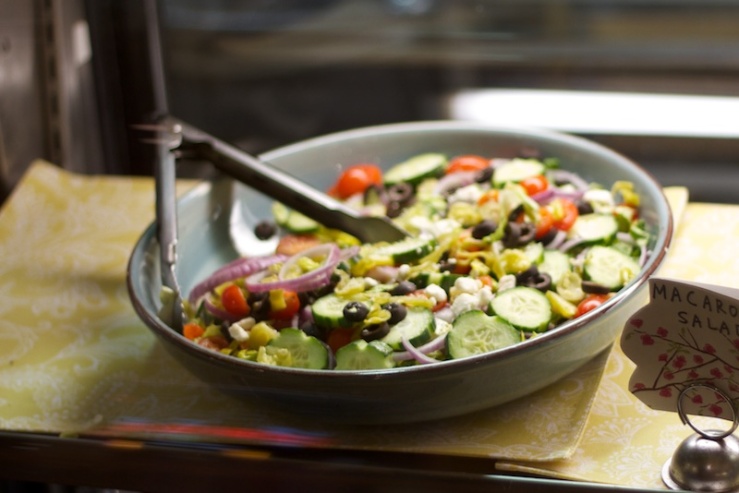 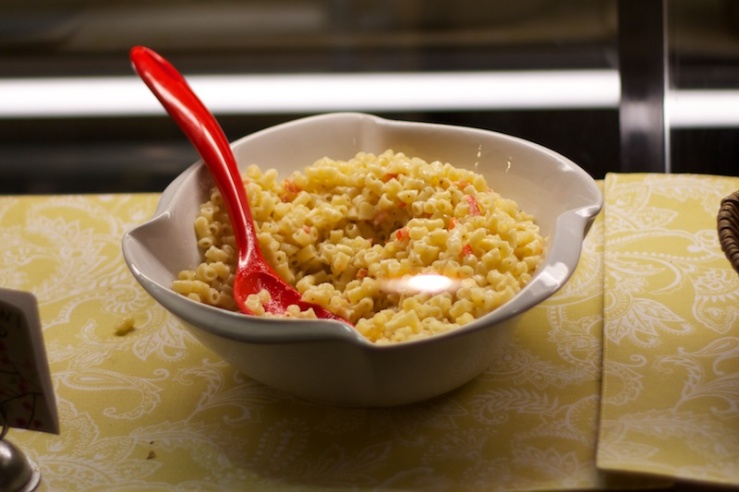 Once we sat down we could watch the cook making our cheesesteaks  on the grill which faced the dining room.  I spoke with him briefly while taking some photos later and he told me about how many of their ingredients, including the bread, is brought in from Philadelphia.  They’ve got Cheez Whiz, which I’ll try eventually.  Some people swear by it, apparently.  They also carry something called Tasty Kakes, little desert things that look like Hostess type cakes.  They are obviously popular since they were sold out.  Later a couple even came in just for Tasty Kakes and left disappointed.  I’ll definitely check those out next time I’m here. 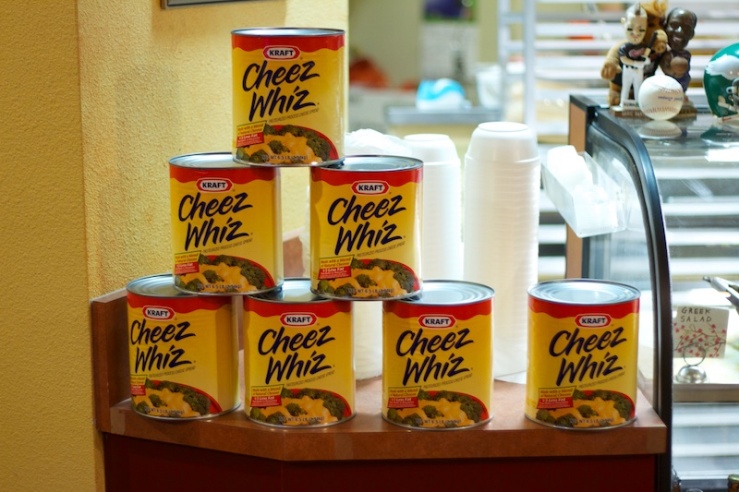 Our steaks came out about 5 – 10 minutes after ordering and were steaming and smelled great.  The onion rings were few, but very large.  They didn’t serve any dipping sauces with them, but after trying one out I decided they didn’t need any.  They were hot and crispy right out of the fryer and pretty tasty.  My Blue Ribbon Cheesesteak was basically the traditional with bacon and a bleu cheese sauce.  I chose provolone cheese, which was perfectly melted in with the steak.  The bleu cheese flavor was good, but not as strong as I expected, probably because I misread the menu and thought it would be chunks of bleu cheese rather than a sauce.  The Amoroso roll was soft, tasty and held the hot cheesesteak together well.

My friend went with a traditional with white American cheese.  He had me try it out, and it was fantastic, the cheese gave it a very creamy flavor and texture.  I asked him if he ever tried one of the non-traditional steaks, but he was not interested and said the traditional was perfect and as it should be. 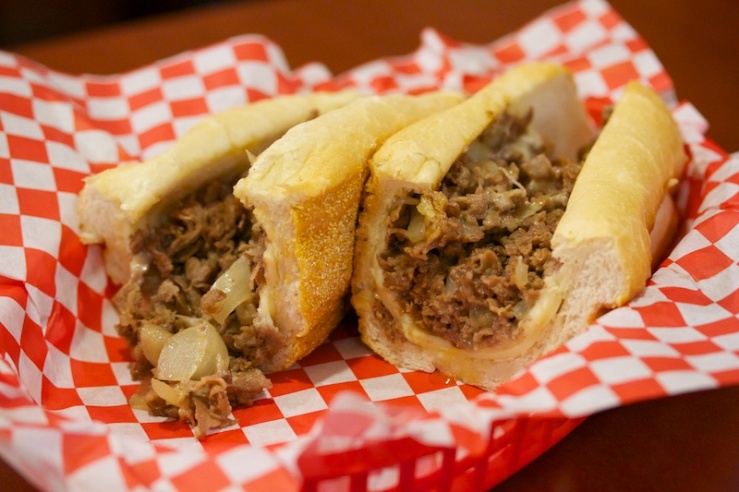 My first two steaks were really good, but the Cheesesteak Grill is on a whole different level.  I know i’ll be returning for sure.  This is an easy 5 of 5.

Website:  I’ve scanned the menu and posted it here.  The website shown on it is not correct.  It points to a cheesesteak place in Nebraska. 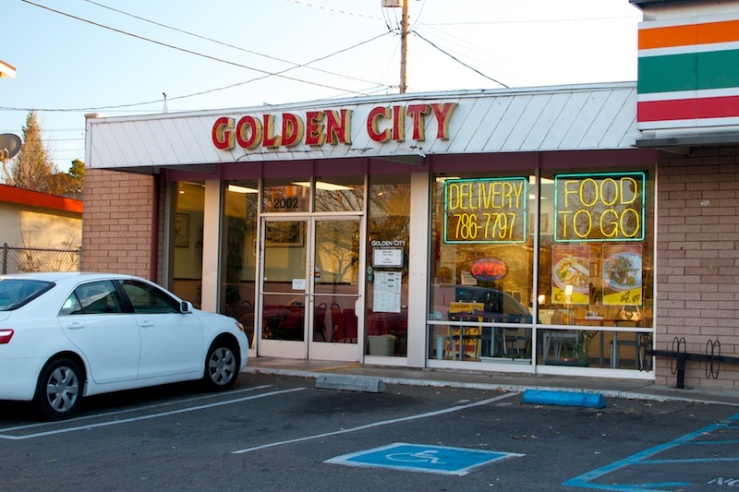 On my way home today I swung by Golden City Chinese Restaurant since I missed out last weeked.  It’s located right next to the 7-11 on South Cirby Way.  I still don’t know why they were closed since I’m pretty sure I had gone by during business hours.  This time they were open, so I headed on in.  I’ve been here only once or twice, about 10 years ago, and I remembered it being good.  That’s an old memory though and a lot can change in 10 years.  Other than a definitely much nicer menu inside at the counter, the place still had the same “feel”.  They have a couple little tables on each end of the tiny space, more for waiting than eating I would guess, though you could certainly eat here.

I skimmed over the menu and decided to pick a couple of my usual items.  I went with General Tso’s chicken (relevant comic) and sweet and sour pork.  For the third item I normally would go with chow mein or fun but I thought I’d give the fried rice a shot.  I’m not usually too into fried rice most places because at best it’s just ok.  The entertainment of Benihana aside I would go there for a giant bowl of fried rice if I could, it’s mind blowing.  I was told my order would be ready in about 10 minutes and the woman went into the back where she and the main cook both worked on my order as well as some others that were phoned in.  Exactly 10 minutes later I was handed a heavy bag and headed home. 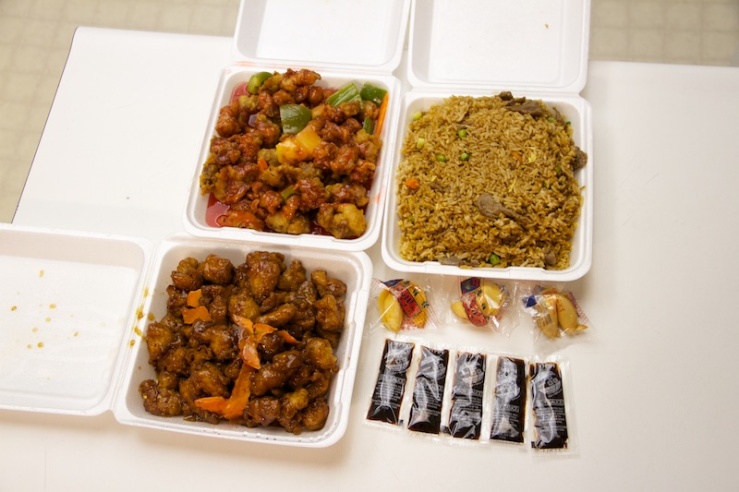 Once home I got a plate filled up and went to town.  The rice was not great, but I would say it was a little better than “just ok”.  It was clearly fresh.  The beef was decent, it was juicy but not super flavorful.  I will continue to eat the leftovers of this, where fried rice elsewhere I might just call it after the first serving.  Next time however I will probably go with chow mein/fun. 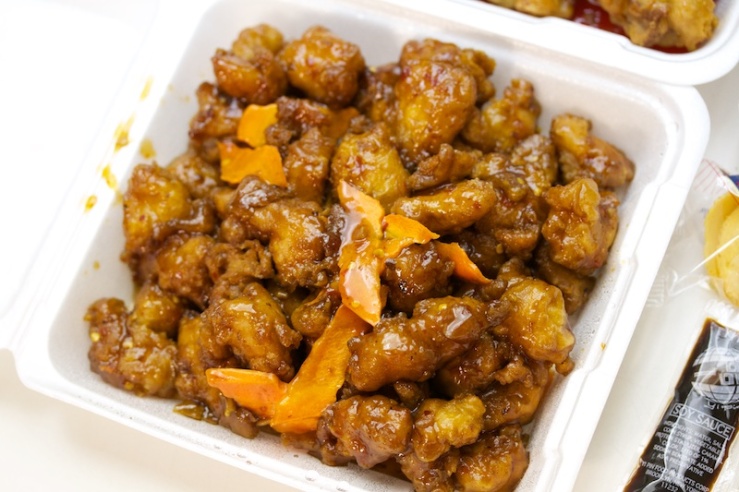 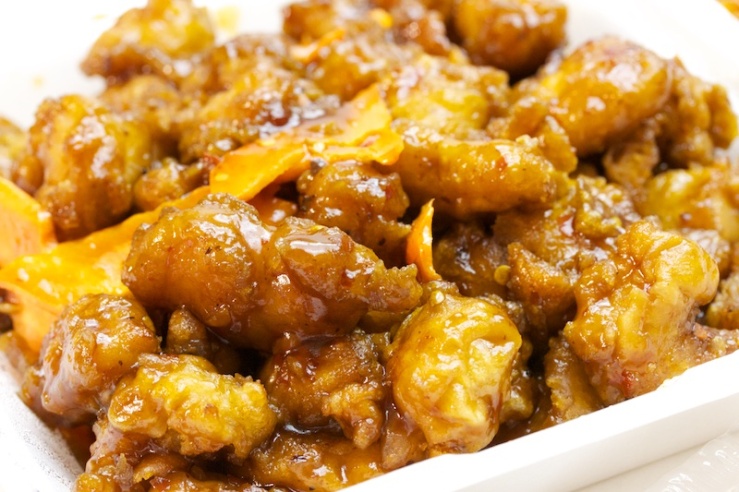 General Tso’s chicken was pretty good overall.  Some pieces were a bit stringy and reminded me of the chicken I would get at the Hot Wok in Raleys back when I worked at the Jack in the Box on Douglas.  A few bites had a little kick to them.

The sweet and sour pork was not totally drenched in bright red sauce like most others I’ve had.  There was a good amount of the sauce in the container though so I was able to get as much or as little on each bite as I wanted, which was kind of nice.  This was also a bit on the stringy side and not super flavorful.  The bell peppers and pineapple were good and there was just the right amount in it, not overwhelming or hard to find.  This was ok, but I would probably try other things before ordering it again. 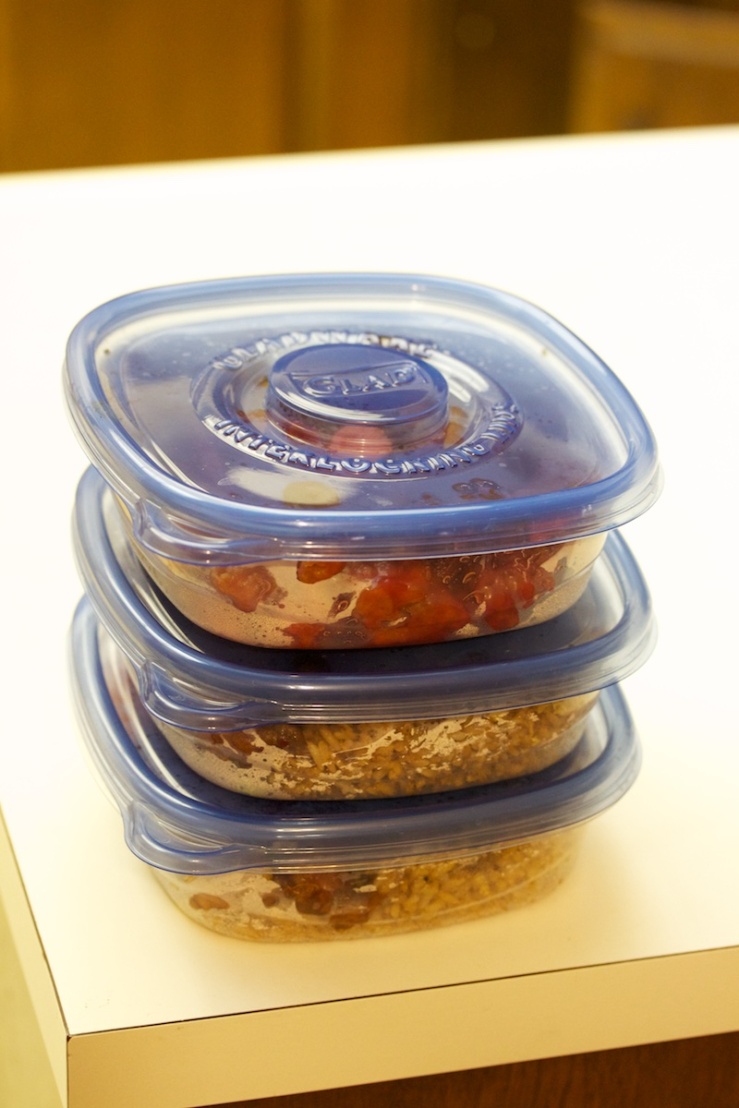 For a $20 order that I will easily stretch across 4 meals this was a pretty good deal.  Taste-wise everything averaged out to ok.  For almost 4 times as much I might be more inclined to go to Panda Express, but this is decent if I know I want to get some leftovers out of it.  I don’t recall the prices at Rose Garden but I don’t think they would be too far off, so it would probably be a better choice even for that purpose.  So overall, Golden City was neither particularly bad or good.  A 2.5 of 5 fits it nicely.

Finally here’s one of my boys, Dusty, who did not seem especially thrilled that he had to wait to eat after me.

When I headed out for lunch today I was intending on grabbing some Chinese take-out at Golden City Chinese Restaurant, and maybe pick up some cookies for dessert at Cookie Connection.  Unfortunately both were closed!  Next I thought I’d go to Five Guys Burgers and Fries, but they were packed, so I finally settled on Sumo Sushi which is located on Douglas at Sierra College between River City Bank and Chipotle.

As I walked in I realized this was the same space that Pickup Stix used to be in, and I immediately missed that restaurant.  Not much has changed in the layout.  The counter has become a sushi bar with a few tall seats and the soda machine is still in the same spot, though it is no longer self serve.  Even at 12:30 I was the only customer.  I picked a table that had booth seating on the wall side so I could see the whole place.  My server gave me a menu and took my drink order, a Dr Pepper.

Since my visit to Sushi House about a month ago I’ve gone out for sushi quite often and now have a pretty good idea of what I like.  I’ve been ordering sashimi and nigiri combos mostly, and my last time out I tried temaki (a cone shaped hand roll).  Today I was feeling like a Fair Oaks roll (deef fried shrimp, avocado, special sauce and tobiko).  I had a ridiculously good one at the Mikuni in midtown a while back which was stacked with avocado.  I also got a order of sake(salmon) nigiri and unagi(fresh water eel) temaki.

They didn’t serve an appetizer, such as miso soup or edamame, as almost all the other sushi joints do.  I didn’t order any, so I worked on getting my dining room picture taken.  I used several photos which I stitched together.  Right as I snapped the last one the server asked what I was doing.  It was the first time anyone has ever asked about me photographing something other than what was on my table.  She didn’t ask me to stop, but I think based on her tone that she might have if I continued.  Luckily I already had what I wanted so I told her they had a nice place and set my camera down. 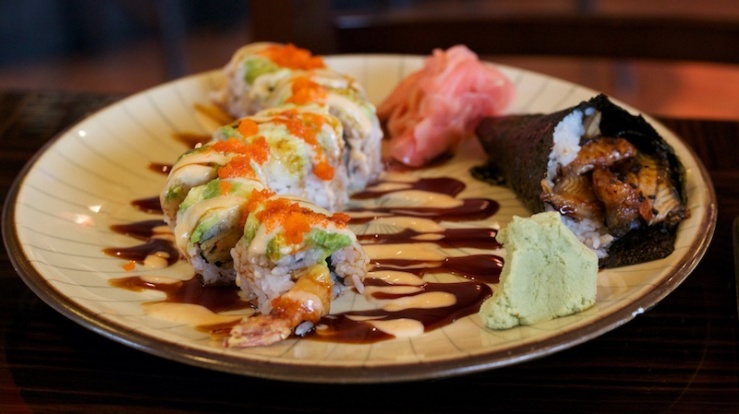 It was probably a little under 10 minutes for my food to start coming out.  A large plate with the Fair Oaks roll and unagi temaki showed up first, and a smaller one with the sake nigiri followed a few minutes later.  The presentation was great, though I’ve never really seen anything less elsewhere.  I was slightly disappointed with the amount of avocado on the Fair Oaks roll, but I probably just got a crazy amount on that one from Mikuni and expected too much.  It was still a very good roll, the shrimp was crunchy from end to end.

The unagi temaki handroll was good, but the one I had at Sensei Sushi in Rancho Cordova was killer.  This one was just the unagi with rice, and the nori (the seaweed wrapper) was soft and difficult to bite through.  The one from Sensei had dry and crispy nori (not too crispy though, it held together well), which made eating it a lot easier, and also included avocado and a couple small veggies which added some nice variety in texture.  The sake nigiri was sliced large and tasted great, I have yet to have bad salmon anywhere.  It was rich, buttery and almost melts in your mouth. 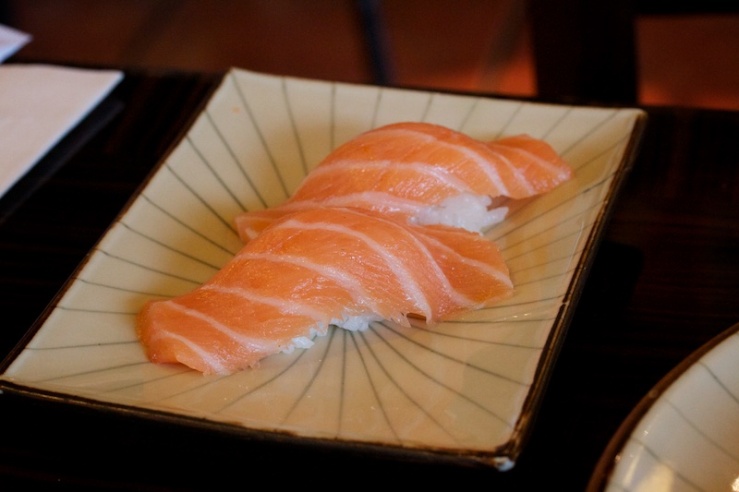 I was pretty happy overall with this lunch.  The prices were reasonable, though I do wish they served some edamame or miso soup with your order.  Also, they could learn a little something from Sensei Sushi when it comes to filling their handrolls.  Other than those little things, Sumo Sushi is a good little location and worth a visit.  I’d give them a 4 of 5.

They don’t seem to have a website, so I have scanned the to-go menu and posted it here.