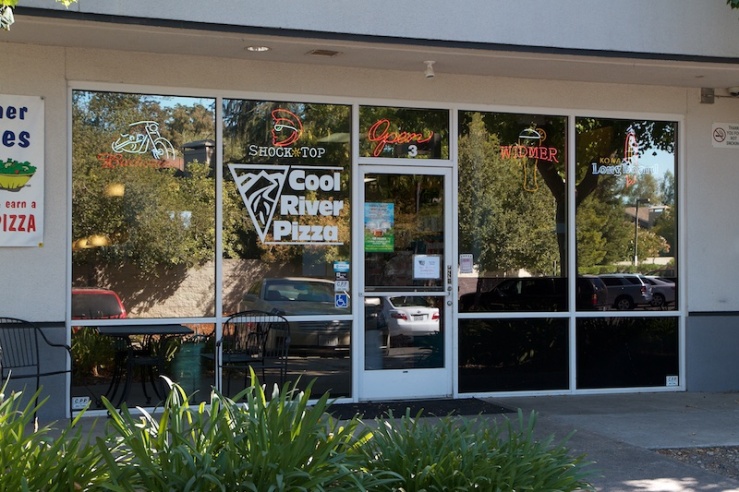 Today I decided to stop by Cool River Pizza on my way home and use an Amazon Local deal I’ve been sitting on for a while.  This pizza joint has been on the corner of Cirby and Rocky Ridge since ’98 and I’ve never ordered from them in all that time.  I walked in just before 4pm to a quiet and almost empty dining room, there was just one person way in the back.  I was greeted as soon as I walked up to the counter.  I told him that I was going to need a minute or two to figure out what I wanted.  He said sure and slid a bell over in front of me and told me to ring when I was ready, then headed into the back.  Some people might think that’s impersonal or rude, and I was a bit surprised by it, but it actually worked out quite well.  I was left to peruse the menu at my own pace without feeling any pressure to make a decision because of someone standing silently at the ready in front of me. 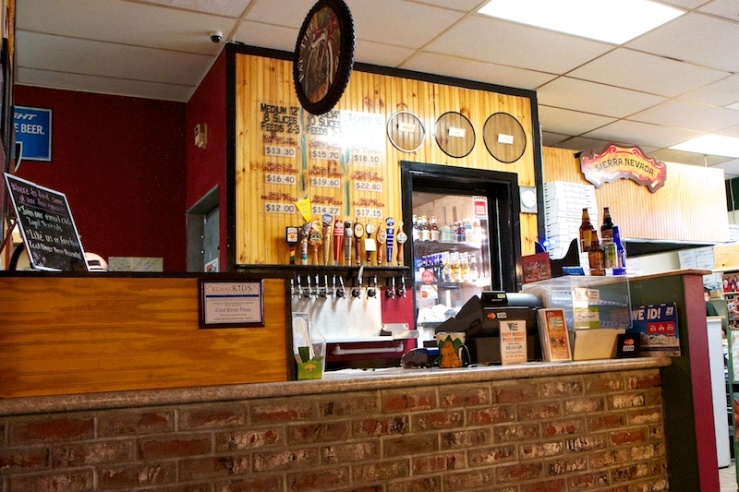 With $20 to spend from Amazon Local I had decided that a medium specialty would be a good choice, leaving a few bucks for something else.  They have a lot of the usual side items including bread sticks and wings, but the thing that I was most curious about were the Cool River Chips (Thin dough with Ranch Sauce & Mozzarella).  There are several options: Ranch Chips (Garlic & Parmesan), Chicken Chips (Herb Chicken), Wing Chips (Spicy Chicken & Wing Sauce) and Confetti Chips (Diced Potato, Bell Pepper & Red Onion).  I decided to try out the ranch chips.  For my pizza I went with a half and half and this time I wanted to go all white sauce.  They have two different ones to choose from: creamy ranch and white Alfredo.  For one half I chose the Cool Chicken Ranch (Creamy Ranch Sauce, Herb Chicken, Crumbled Bacon, Tomato, Red Onion) and added mushrooms.  On the other half I got the Delta Luau (Smoked Ham, Dole Pineapple Tidbits, Crumbled Bacon) but asked for White Alfredo instead of the standard Cool River Red sauce.  Of the two crust options I chose the thin over the original.  I spent just about 4 bucks over the Amazon Local deal. 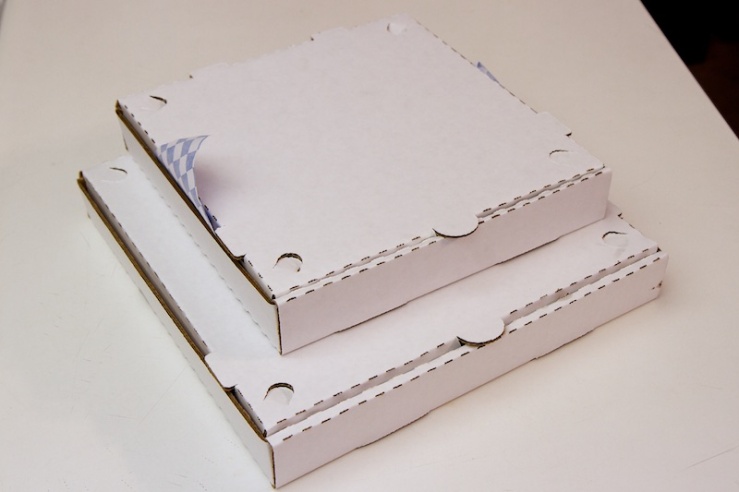 Just about 10 minutes later I was headed out the door with my two plain white boxes.  The smell of cheese and bacon filled my car on the short drive home and made me even hungrier than I thought I was.  Once I got home I popped open the smaller box containing the ranch chips.  It resembled a small pizza with very light cheese and a cracker thin crust.  It was cut in a grid, making around two-dozen small squares.  Not only was the crust cracker thin, it was nearly as crispy as one in the center, definitely so around the edges.  The flavor of these outside pieces was dominated by the crust where it was darkest and on the verge of being burnt.  It wasn’t terrible, as an appetizer I think it’s somewhere between “meh” and decent.  Because I had my pizza right next to it at the same time it looked a little sad.  One of the ones with more substantial toppings might have fared better. 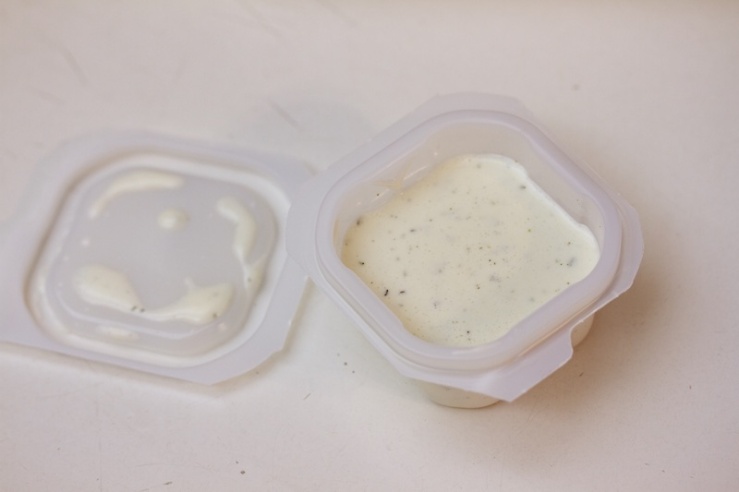 At first glance when I opened the pizza box I wasn’t sure what to think.  The tomatoes didn’t look very ripe, and something else looked off, though it took me much longer than I’d like to admit to figure out.  The crust was done nicely, thin and with a bit of a crisp, but not so crispy that it would hold the entire slice up on it’s own.  The creamy ranch was smooth and delicious, with just a bit of a zest at the end.  This went really well with the herb chicken, which I’ve decided is light-years ahead of regular chicken found elsewhere.  I have no idea what herbs are used it but the little bits are clearly visible all over the pieces and add a significant amount of flavor.  The tomatoes were so-so, for texture they were nice to mix it up a bit but other than that I could have done without and not noticed.  There wasn’t as much bacon as I would have hoped for, but the chunks that were there were decent sized and tasted excellent.  The mushrooms were very subtle, I didn’t really notice them that much.  I really liked this side for the most part. 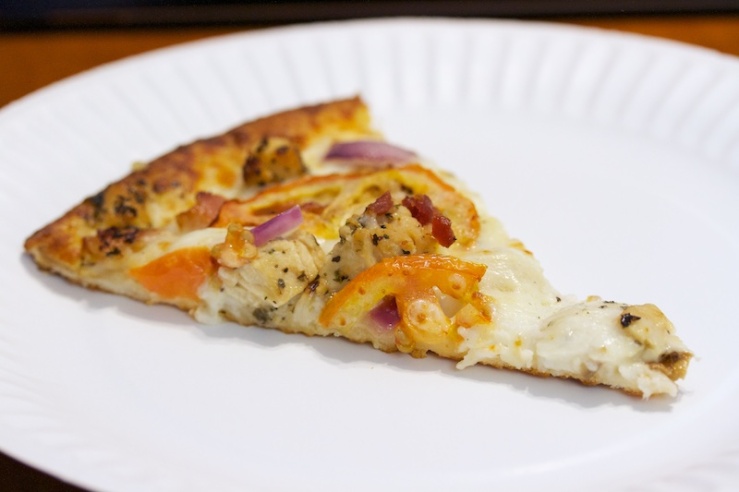 The other side was much simpler.  Mushrooms, herb chicken and onions on Alfredo sauce.  You might think that’s not at all what I described above with the Delta Luau, and you’d be right.  I have no idea how they came up with this.  From the menu it seems I got the White Water Dunk instead of the Delta Luau with Alfredo.  Despite not getting to try what I had picked out this side was actually pretty good, if a little more plain tasting than the Cool Chicken Ranch.  It was very smooth and creamy with the Alfredo sauce and the mushrooms on this side had a much more apparent impact. 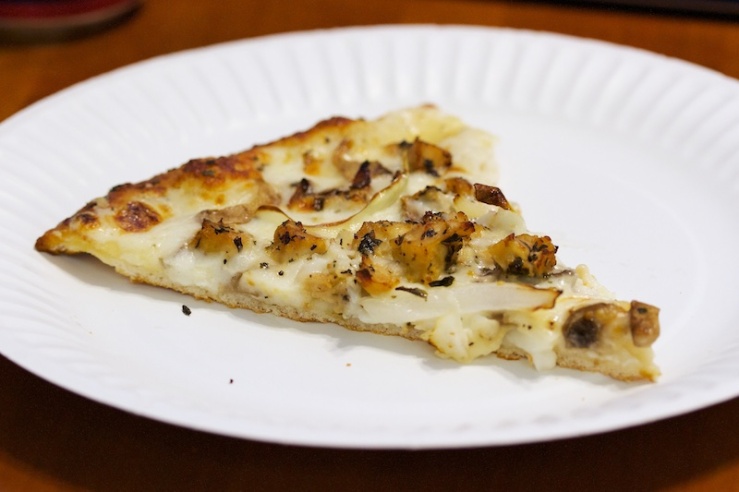 As far as the taste and quality of the pizza I was pretty happy.  Obviously the order was screwed up, but at least what I got in it’s place was still good.  The Cool River Chips were disappointing, I probably would not order them again.  Service-wise I was content.  The cashier’s attitude was just about right, not over the top fake bubbly and smiley, it was like interacting with a normal human providing satisfactory customer service for a take-out order.  Despite the mistake I think I would order from here again.

Finally, here’s Rupert, excited after a long day of napping to see me home.

Islands Restaurant is located kitty-corner from Sunsplash Waterpark and across from Tahoe Joe’s Steakhouse, on the corner with the 3 Marriott hotels.  There are a bunch of these located in southern California, with a few scattered about Arizona, Nevada and even one in Hawaii.  Their primary focus is burgers, but they have a full menu of other options including salads, tacos and sandwiches.  This visit is from a couple weeks ago.  Other than a very recent visit it had been quite a long time since I had been to Islands, maybe as long as two or three years.  I  seem to forget about this intersection since I don’t go through it often. 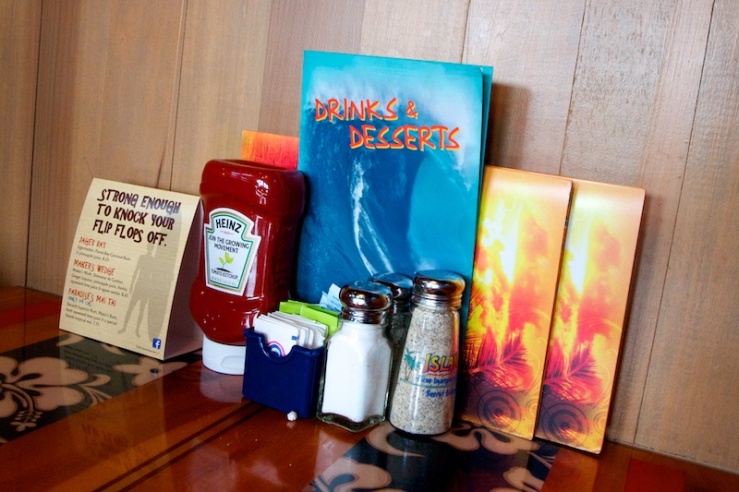 I arrived at about 6:45PM on a Tuesday.  It was fairly busy inside, maybe about 3/4ths full.  I was with my mom and we were seated immediately in a booth.  The menus are at the table, against the wall by the condiments.  Just as soon as we had sat down and reached for the menus our server arrived, greeted us and took our drink orders.  He immediately noticed my camera and correctly identified the model from the back and we talked photography for a bit before he went to get our drinks.  I don’t remember if they had Pibb or Dr Pepper, but that’s what I got.  My mom ordered an iced tea.  They both arrived in big plastic mugs.  My mom did not like the tea, but couldn’t put her finger on the reason.  Later she recalled that she had the same experience the last time she was here.  She stuck with water after that.

I had been here the weekend prior to this after seeing Total Recall (despite the terrible reviews, and this coming from someone who never saw the original, I loved it) and I already knew I wanted the same burger.  I would have just done my review on that visit but it was a spontaneous lunch and I didn’t have my camera.  With that, the next time our server came by to take our order, and after some more photography talk in which he now pulled his phone out to show me some cupcake shots he had taken, I ordered the Rincon (guacamole, lettuce, tomato, onion, swiss, applewood smoked bacon & mayo).  Islands only cooks their burgers to medium or higher, which I found a little disappointing when the server on my first visit told me this.  There is a choice of a white or wheat bun, I went with the latter.  For some reason I feel like I read on the menu there at the table that the fries are unlimited, and the wording at the time did not seem to exclude the other side choices.  I cannot however find anything to that effect on their site or printable menu, so maybe I’m just crazy.  I suppose it doesn’t matter all that much since the burgers are huge and I always just barely finish everything on my plate.  Anyway, I substituted onion rings in place of the fries. 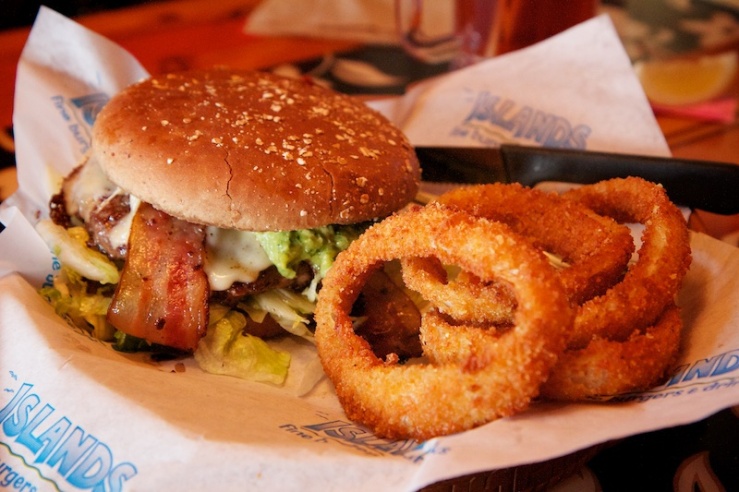 Our server came by at a reasonable frequency although I do feel like I saw other servers stopping by their tables more often, which would have been nice for some quicker refills here and there.  It wasn’t all that big of a deal but I suppose it was worth noting.  Our burgers took about 10 minutes or so to prepare and come out.  This is a big burger, and with guacamole on it it’s also a messy burger.  As I mentioned above, the lowest they will cook their burgers is medium.  This is actually not bad at all.  Their medium is a lot more like other restaurant’s medium-rare.  There was still a bit of pink in the center, and overall it was a very juicy burger.  Along with the guacamole and juiciness, it became a minor issue in finding a semi-clean spot on my plate/basket to set the burger down without soaking the bun in drippings.  Aside from that, it was a fantastic burger with really good bacon.  The cheese was mild but nice and melty.  The onion rings were excellent, fried to a golden, crunchy perfection that went well with a side of ranch.

Islands is definitely back on my radar after a long stretch of time that I had forgotten about it.  They’re always doing good amounts of business though I’ve never had to wait to have a seat.  The bar area is a decent place to watch sports with three TVs giving everyone a good view.  They have several other TVs around the rest of the dining area which are set to a surf channel and can be an interesting distraction.  I’m curious about their deserts but I need to plan ahead and either not order as much or take some food home with me in order to save room.  If you haven’t been to Islands but enjoy a solid burger, check it out.

Another quickie before Islands tomorrow.  Since this is a big chain this will be a photo post only. 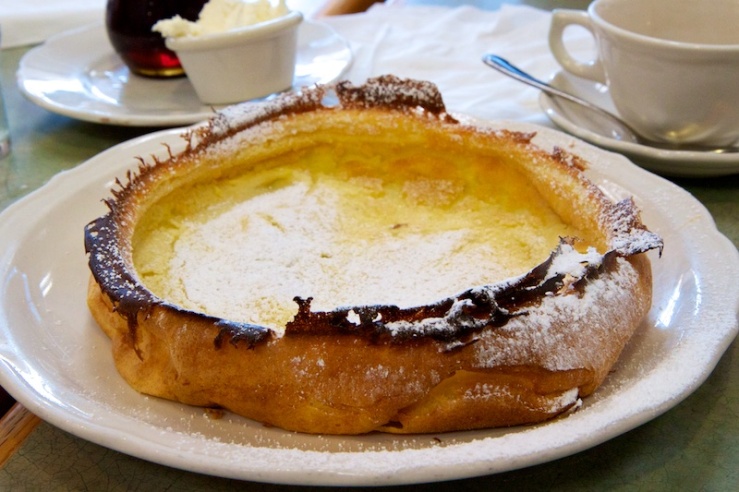