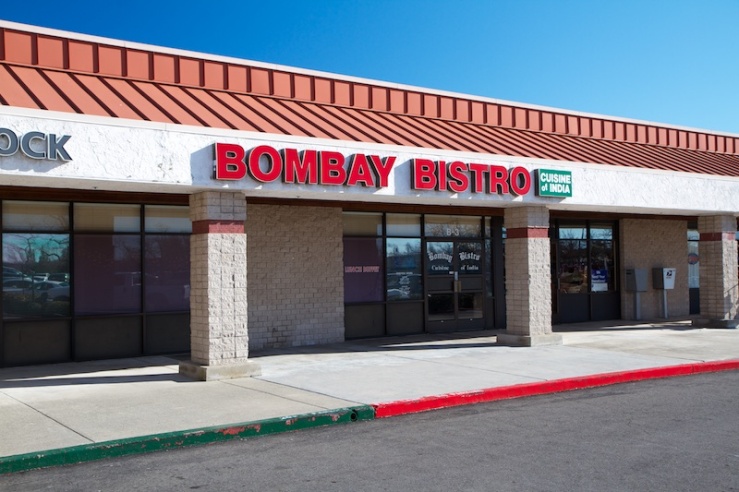 On to 2013 and with the way things have gone so far, the last year of my mission!  I’m starting out with Bombay Bistro, an Indian restaurant tucked far back in a corner of the Hobby Lobby shopping center on Douglas.  I actually came here a few times in the last week in order to use up some Groupons that were very close to expired.  For some reason I had purchased several.  First, dinner on Saturday with my friends Anne & Justin, a couple days later for the lunch buffet with Justin, and take out dinner for myself last night. 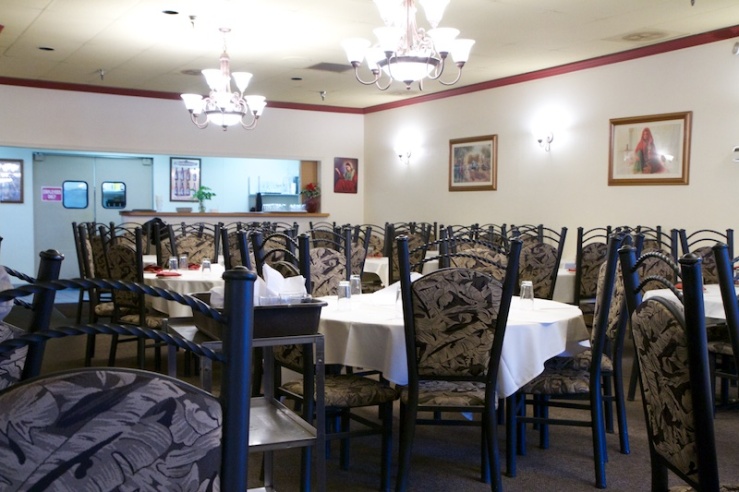 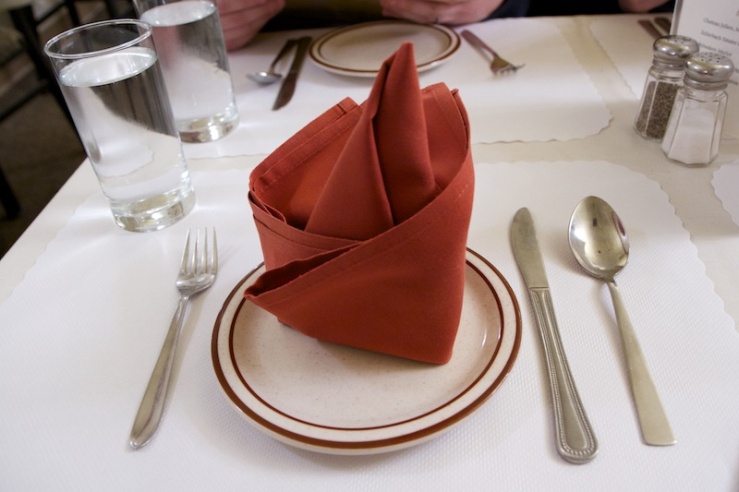 Anne, Justin and I arrived sometime after 6PM on Saturday.  We entered the large dining room where a half dozen or so tables were occupied.  One of the servers told us to sit anywhere we liked.  I picked out a table near the back and we sat down in the high-backed chairs.  Glasses were already at the table and they were filled with water within a couple minutes, it took another minute or so to get menus though.  We ordered drinks when our server brought those out.  I got a mango lassi (mango blended with homemade yogurt, milk and rose water), Justin went with a Coke, and Anne ordered a glass of white wine.  The lassi was very cold, almost icy even.  It was as delicious as every other one I’ve had, with that sweet mango flavor that lingers after each sip.  Anne & Justin both tried it and liked it so much they each ordered one later on as dessert. 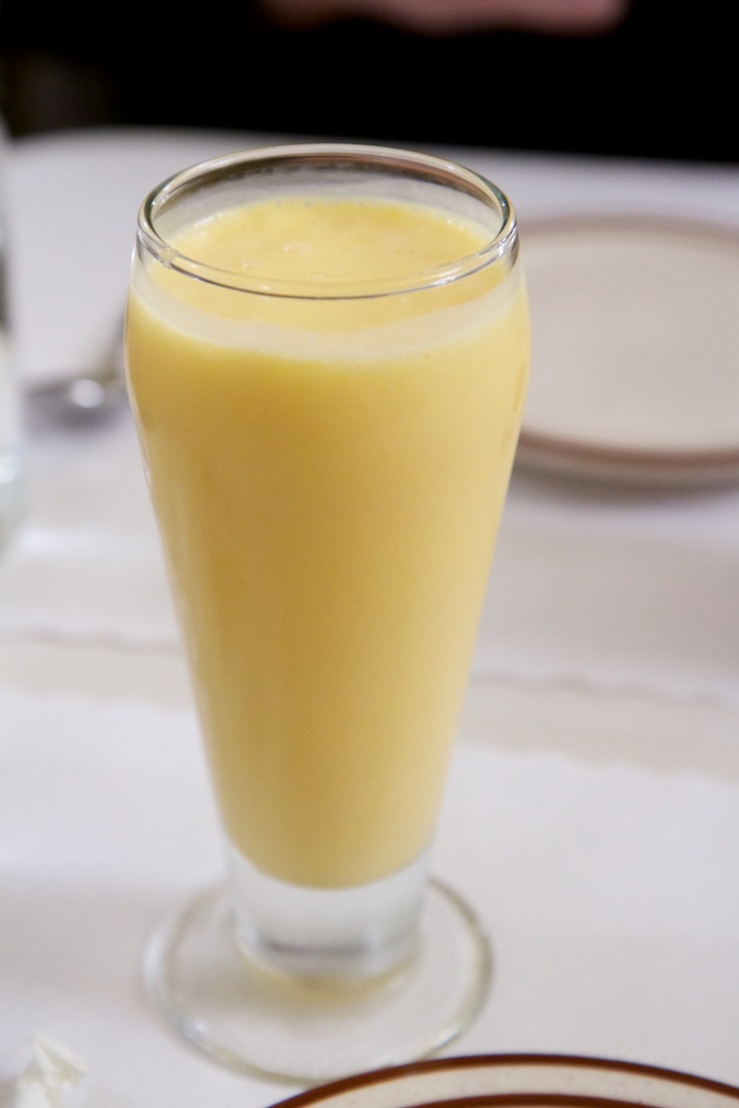 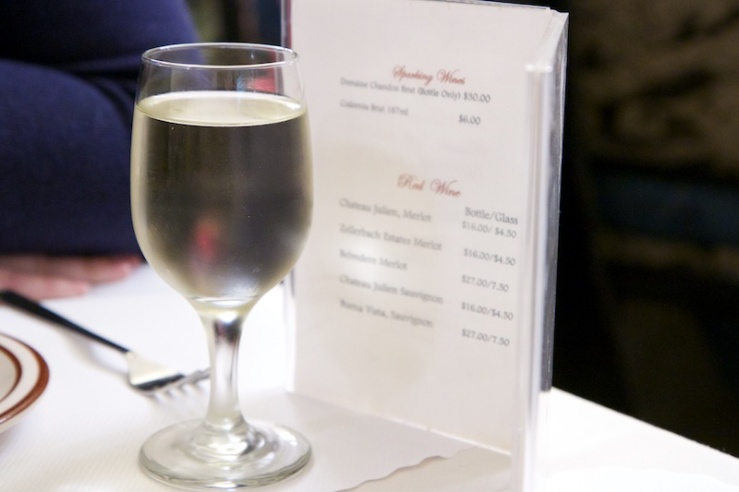 We took some time deciding on our food.  Justin was not very familiar with Indian food (not to say that I am) so I recommended he order a tikka masala dish.  I think it’s a great intro to Indian food, rich and flavorful without being very spicy.  He chose the lamb tikka masala (boneless lamb cooked in clay oven and cooked with mildly spiced creamy tomato based curry).  Anne picked out the paneer masala (semi dry preparation of cheese made with bell peppers and onions).  I chose the chicken biryani (rice based dish cooked with curry sauce).  We also tried to order aloo saag (potatoes cooked in spinach with spices) but were told they were out.  For an appetizer we got a double order of vegetable samosas (two crisp patties stuffed with potatoes and spices).  While ordering we noticed our server was a little off.  Delays in his responses were just long enough to make us wonder if he had heard us or not, and he was very curt.  I took a guess that perhaps a normal server was out and he was filling in but a little out of his element.  Other than that though he was fine, checked on us frequently enough and took care of us to a satisfactory level. 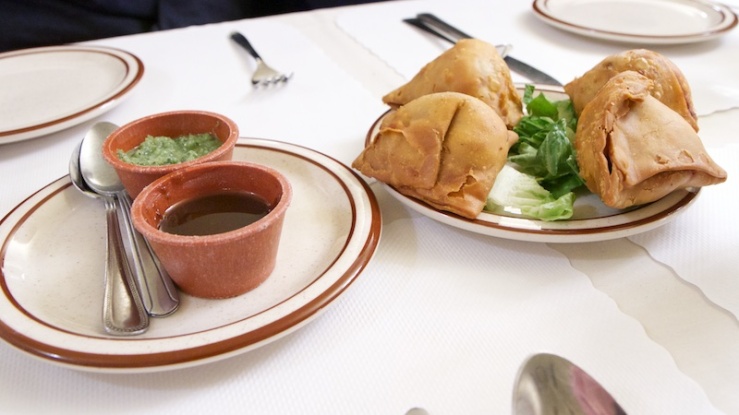 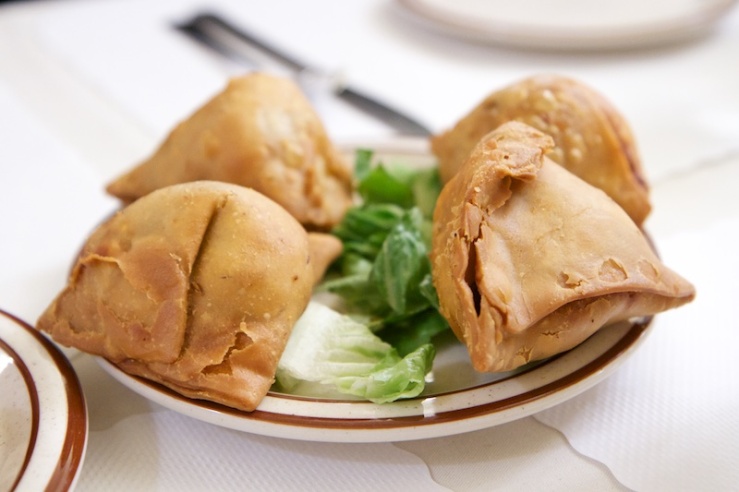 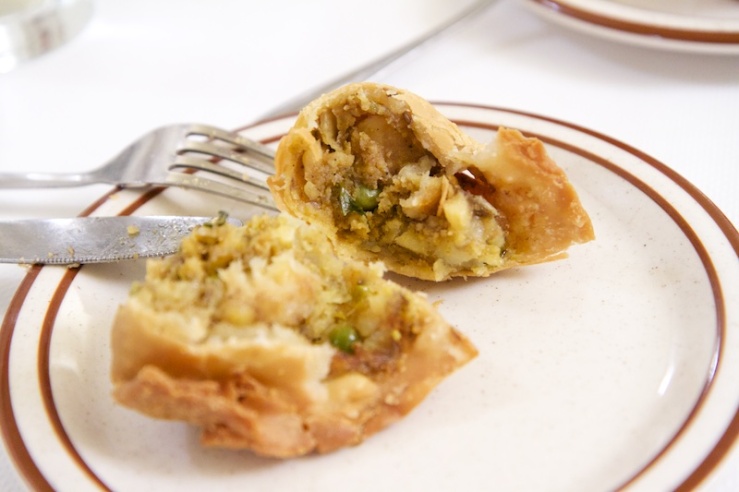 The samosas were soon to arrive, paired with mint and sweet chutneys.  These were fantastic, fried to a crisp and flaky perfection.  Inside I could make out peas and potatoes, but I think there was probably a little more to them.  It didn’t take too much longer before our main items were delivered.  The chicken biryani arrived in a medium sized bowl and was yellow in color.  With it was a little bowl of what I guessed was some sort of yogurt to go over it and cool it down (spice-wise) [Google is my friend, it is apparently called raita and is indeed a yogurt based sauce or dip].  The lamb tikka masala and paneer masala each came in a smaller bowl along with a side of rice.  Last to arrive was a basket of hot, fresh naan.  We dug right in.  The chicken biryani was very aromatic and had a non-trivial spice that snuck up over multiple bites.  Sips of lassi were a great way to cool it down as needed, and later when I put some of the raita on it it helped keep it in check.  There was quite a bit of biryani left which I took home, but not having a good way to take the raita with it I was subject to that building spice the next day for lunch (I probably could have asked for a little container to put it in but didn’t think about it at the time).  I should have jotted down some notes because I can’t really recall what the paneer masala tasted like, though I do remember it being pretty good.  Anne commented that the cubes of cheese were remarkably like tofu in appearance and texture, which I agreed with.  My favorite by quite a bit was the lamb tikka masala.  The lamb was nice and tender and the curry sauce was thick, creamy and rich.  I ended up having all of the leftovers because they forgot theirs in my fridge later 😉 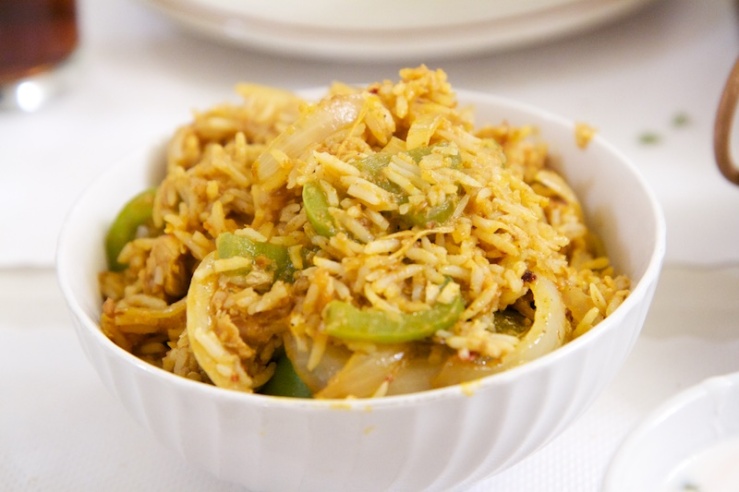 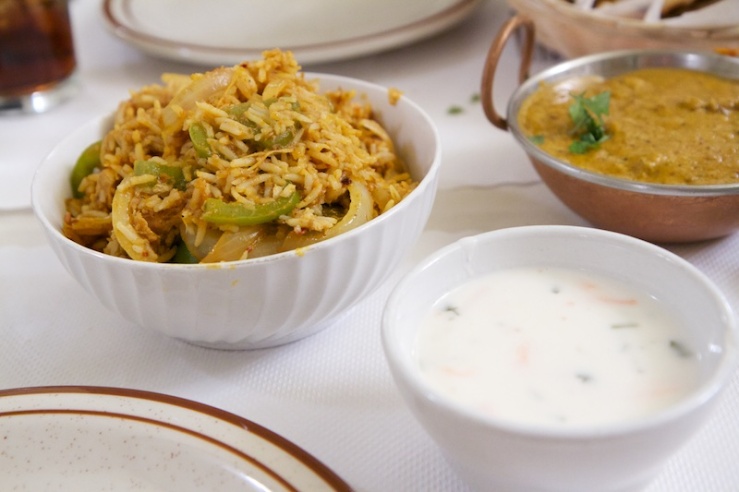 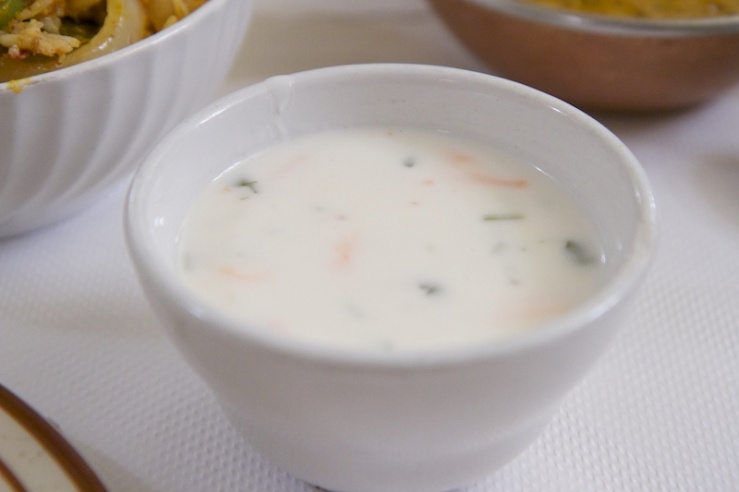 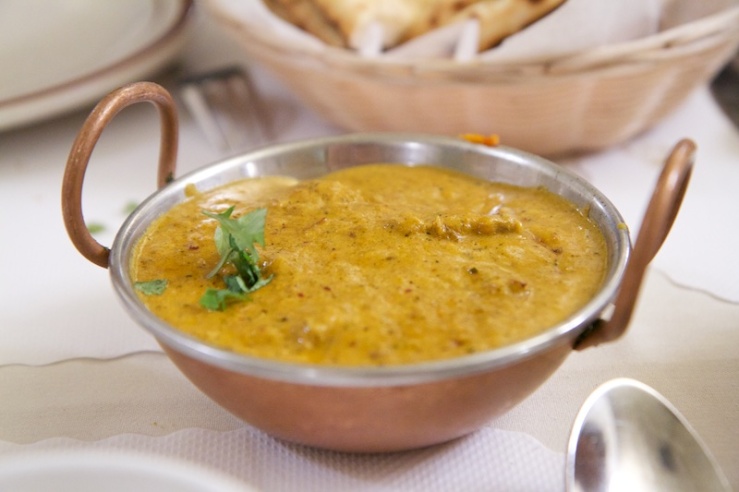 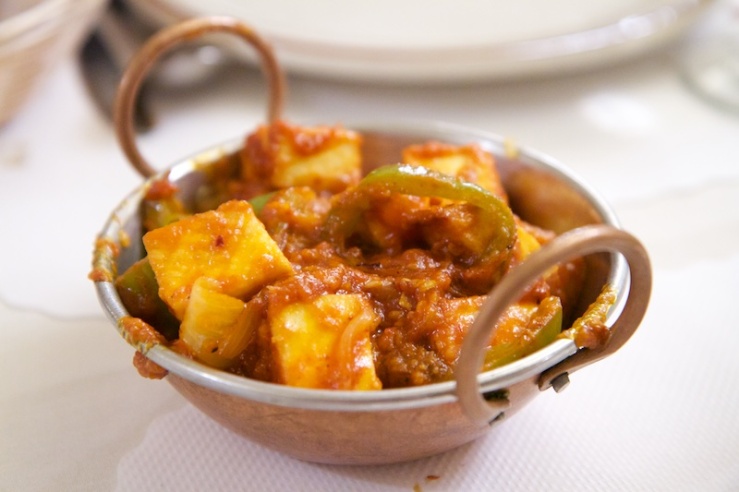 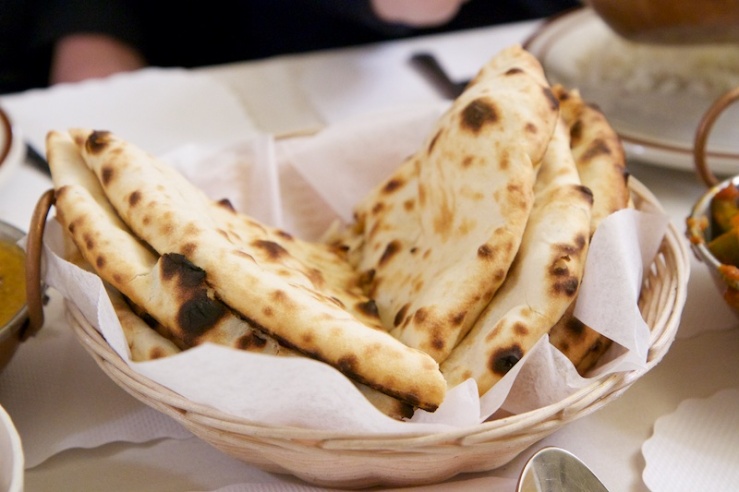 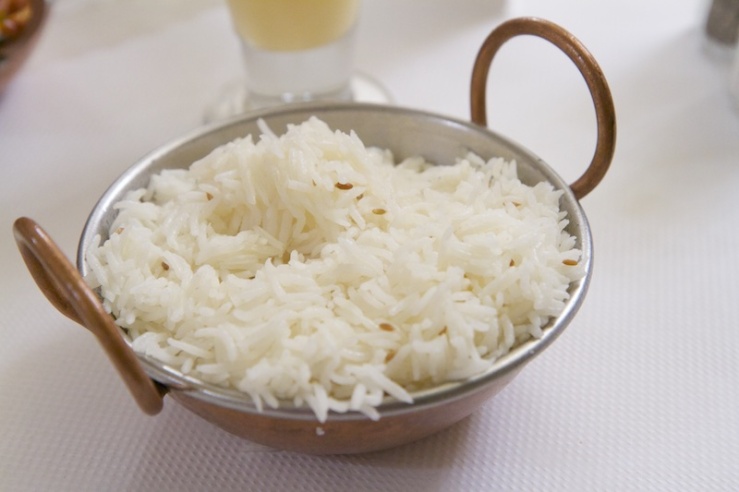 On to dessert, and I was quite excited about this.  I should note that Bombay Bistro has practically no online presence (except for a facebook page), so I was looking at third party sites to try and find menus prior to arriving.  On one of these menus I saw a mango cheesecake with mango sauce which sounded pretty awesome.  Unfortunately their actual dessert selection was not quite what I found online (which isn’t really their fault, I probably shouldn’t have trusted the other source in the first place.  I’ve scanned the official Bombay Bistro takeout menu and posted the link at the end of this post so you can see what they actually have).  Anyway, I was left to make an alternate decision from the following: kheer (sweet rice pudding with nuts), gulab jaman (dry milk and cheese deep fried and soaked in honey syrup), pista kulfi (pista ice cream), mango kulfi (mango ice cream) or a mango Sunday (2 scoops of vanilla ice cream with mango pulp with whipped cream).  I asked for the mango kulfi, thinking mango ice cream would be a good substitute, but was unfortunately told that they were all out.  Defeated, I went with the gulab jaman.  I’ve had this before at an Indian buffet in Folsom, so I knew it would be good anyway.  Out it came in a little cup.  Best described as dense, sweet donut holes, these are over the top sweet when you take into account the honey syrup.  They are served hot, and the syrup is fairly thin as a result, but still very, very sweet.  These were much better than the buffet ones I had and I was quite pleased by the time I took the last bite.  I still want to try the mango ice cream eventually though. 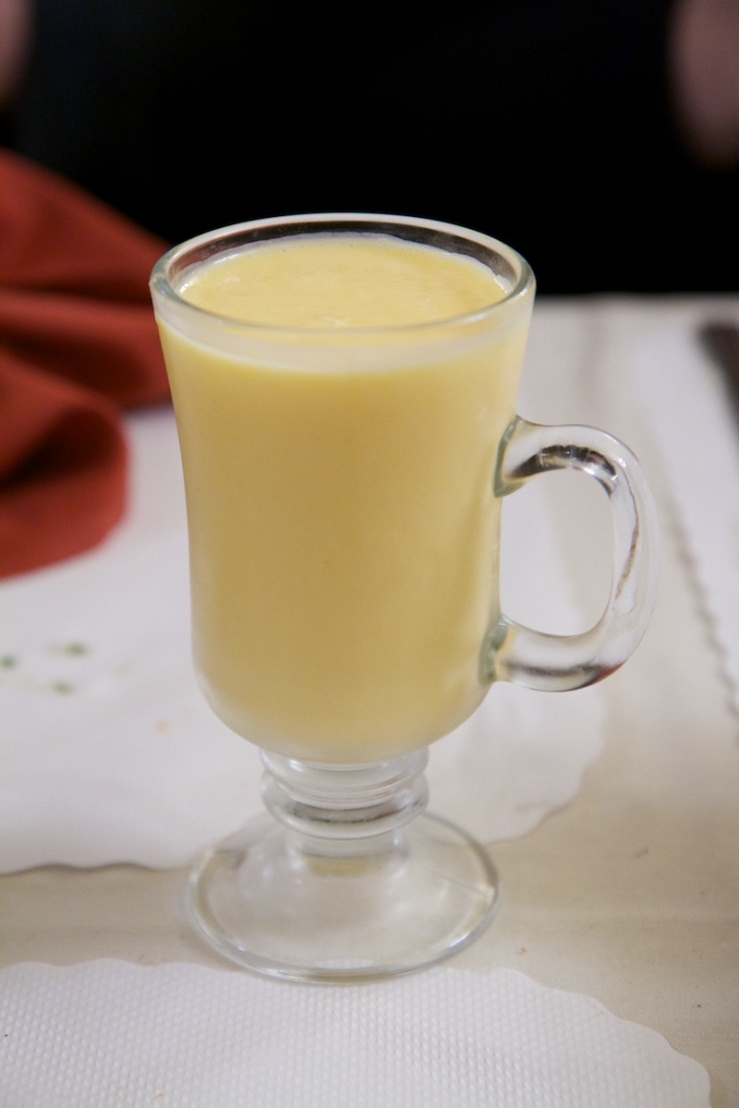 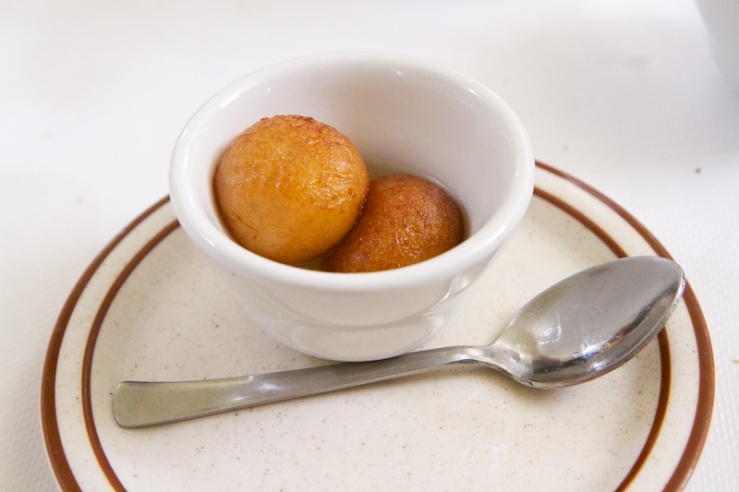 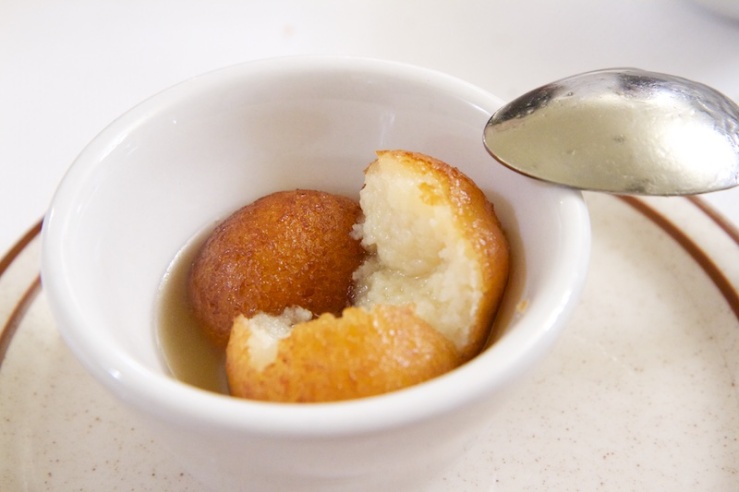 Other than the service being a little odd and being out of a couple things, I’d say this was a pretty good dinner overall.  I returned once more for the buffet a couple days later.  The buffet selection seemed about on par with what I’ve seen elsewhere with a couple exceptions.  I did not see any appetizers or desserts.  Also at that Folsom buffet I found an amazing mango pudding that tasted exactly like the lassi I love so much.  Was kind of hoping to see that here as well, but unfortunately there was nothing on the sweet side.  The next night I returned to finish off the last groupon and ordered a couple items for takeout.  They were ready in about 20 minutes (I called ahead).  The guy that helped me over the phone and in person once I arrived was much more personable than the server we had the first night.  Of note with this order was the saag paneer (cubes of homemade cheese cooked in spinach with spices).  The cheese in this was quite a bit different than the cheese that was in the paneer masala.  These pieces were much harder and drier, almost more like an aged cheese.  It wasn’t bad – in fact I liked it quite a bit – it was just much different from what I’ve had elsewhere and was expecting. 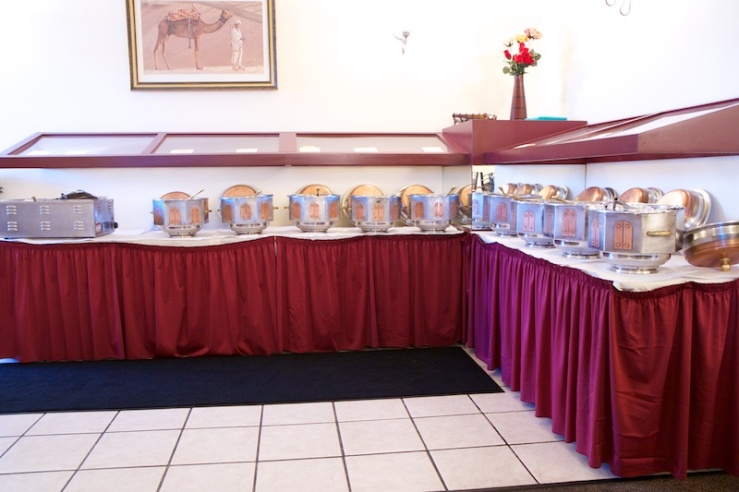 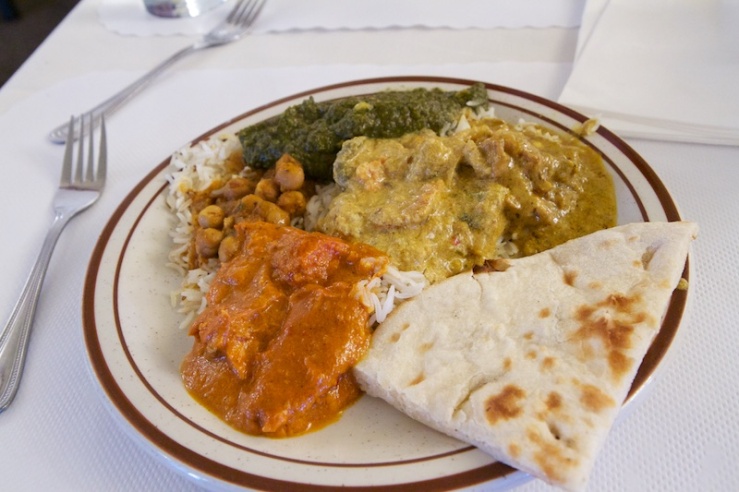 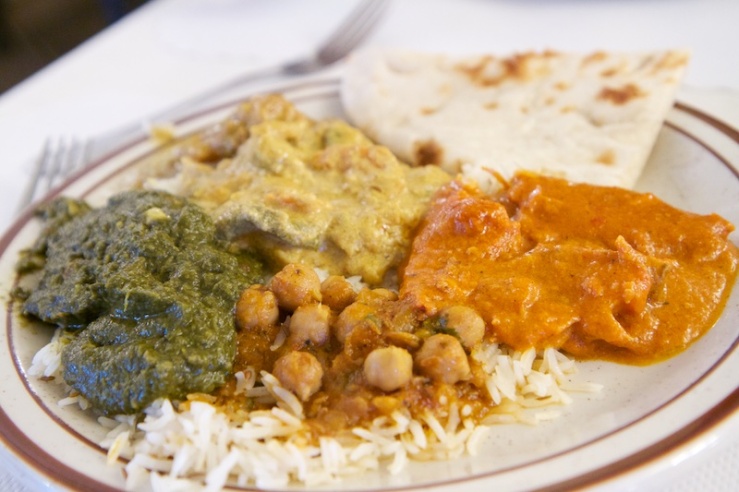 I’m happy with Bombay Bistro overall.  I think the food is of similar quality to Mehfil.  I might say that the service at Mehfil puts them a bit ahead, but it probably just depends on who is helping you at either place.