Yoko Sushi is a tiny little sushi joint hidden in the back of a shopping center at Douglas and Sunrise.  It’s directly across the street from Mandangos and the Squeeze Inn.  I arrived here at about 6:30 to meet some family for dinner.  When I walked in to the completely empty dining room, I was greeted by the sushi chef and waitress and I informed them I was waiting on others and sat down in the single chair by the door.  After a few minutes of skimming through one of the take-out menus that were on the table next to me I got up and took a photo of the dining room with the chef’s permission.  Right about then the first person showed up.

The dining room is quite small, you can see pretty much all of it in the photo.  The only thing that is not shown is the ~10 person sushi bar and 1 more table.  It’s a quiet and cozy little place, and I loved the little movable privacy dividers, pretty cool idea.  We were seated at a center table and the waitress placed all the menus, napkins and chopsticks out.  I had taken a photo or two of the menu when she came by and told me not to continue.  In some instances I can understand that policy, however the take-out menu (link) has almost identical information including prices, so here I thought it was a bit strange.  The menu is pretty standard for a sushi restaurant, a decent selection of rolls, the typical sushi & sashimi choices, appetizers and dinner combos.  We were still waiting on two more and told her that we would wait when she asked if we wanted to order.

The two of us sat at our table idly flipping through the menu, the waitress stood at the front desk and the chef behind the bar was watching TV, all for a good 15-20 minutes after that.  At first I was fine with it, but after a while I had kind of wished she would have came back and seen if we at least wanted drinks.  Finally the rest of our party arrived.  They had a few minutes to go through the menu as well before the waitress returned and took our entire order at once.  She was direct, efficient and was off to get our drinks and appetizers quickly. 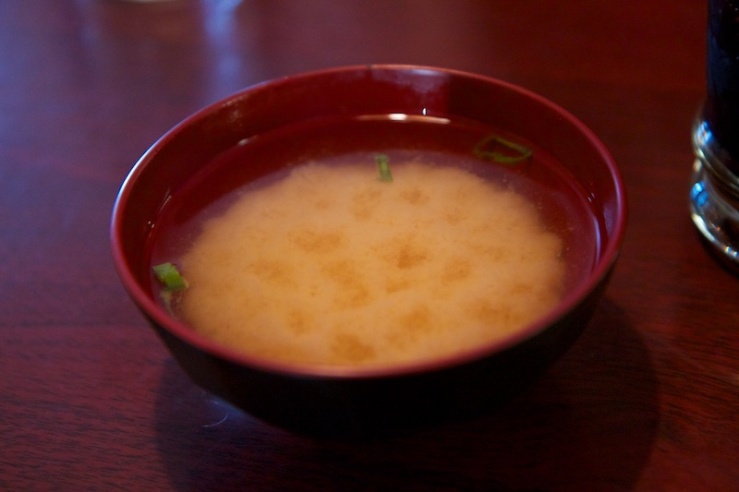 Shortly after ordering a woman and her daughter arrived and sat at the bar.  They seemed to be regulars and had considerably more interaction with the staff than we did.  They were the only other customers the entire time.  Not too long after that, a house salad, mixed tempura appetizer and my miso soup all arrived at once.  The soup was excellent, not too salty and the temperature wasn’t so hot that I had to let it cool off.  The tempura was about the same as anywhere else.

The main orders arrived mostly all at once, with mine lagging about 5 minutes behind them.  With a single sushi chef I suppose that’s understandable.  There was a dinner combo box with tofu tempura and a vegetable roll.  I hat a bite of the tofu and it was pretty good.  The two rolls that were ordered were the Mt Fuji (shrimp tempura, avocado, crab with scallop) and Honey (shrirnp tempura, avocado, crab) rolls.  I did not get a picture of the Honey roll. 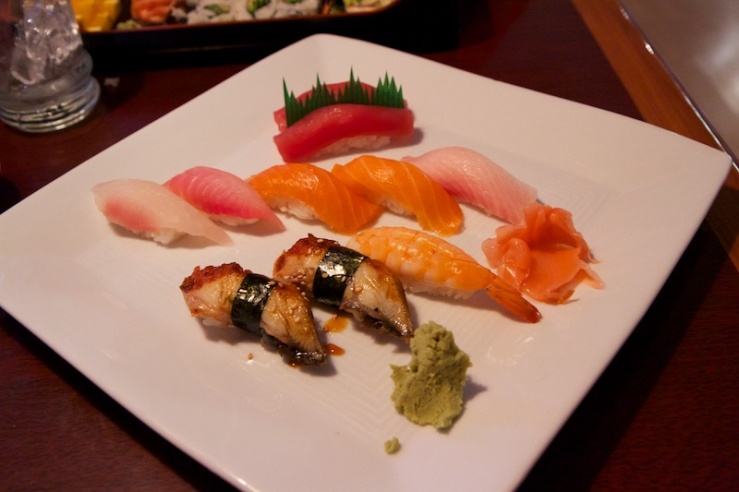 I ordered the sushi combination #2, which is 10 pieces of nigiri sushi.  As usual with an order like this the sushi chef chooses the fish.  I received maguro (tuna), sake (salmon), ebi (shrimp), unagi (eel) and I’m not positive about the three on the outside of the middle row but I’m guessing Tai (red snapper) and/or hamachi (yellow tail). 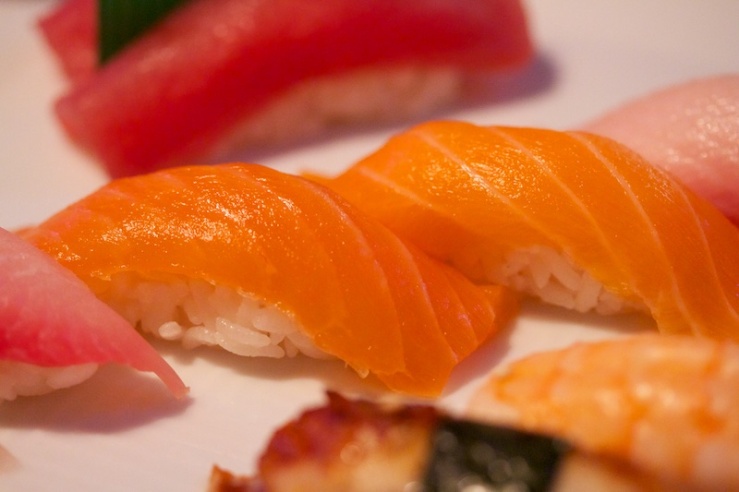 The unagi was probably the best thing.  The others didn’t seem super fresh and were all about room temperature.  Flavor-wise they seemed ok, but they had just a touch of extra toughness to them, particularly the maguro and sake.

Overall, not one of my favorite sushi places.  The service was minimal and the sushi was OK at best.  I had attempted to come here some months ago and was seated for a solid 10-15 minutes before the waitress came to take my order and then informed me that they couldn’t make about half of the menu because the chef had hurt his hand and was out for the day.  That was pretty frustrating (although it led to arguably one of my best sushi meals ever at Blue Nami, so perhaps it was a good thing).  It’s possible tonight was just an off-night for them, but we have so many other sushi restaurants that are consistently great that I can’t say I expect to return here.