This post is a bit later than I was planning on but I think it’s worth it, had a great dinner and I have lots to share! 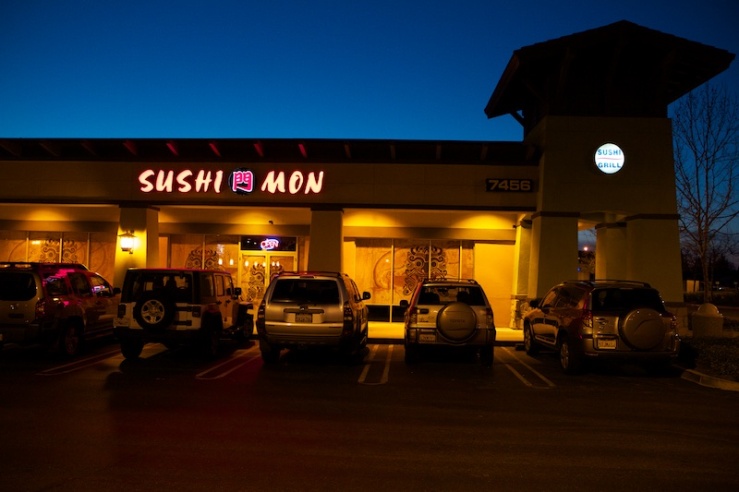 Today was a day of sushi for me.  I went to Sensei Sushi in Rancho Cordova for lunch and had a great meal.  I asked my mom and brother if they wanted to join me for dinner and to pick the place and we ended up with Sushi Mon.  I was totally down for some more though.  My mom had been to this location a long time ago when it was under different ownership but couldn’t remember much about it.  I walked in on a Friday night one time and the wait was long enough that I went somewhere else.  From the minute or so I was inside I decided it had a very similar vibe to Mikuni or Blue Nami.  Not brightly lit but not exactly dark and just nice looking in general.  My brother has been here at least a few times and commented that he’s not had the best service but that the food is very good. 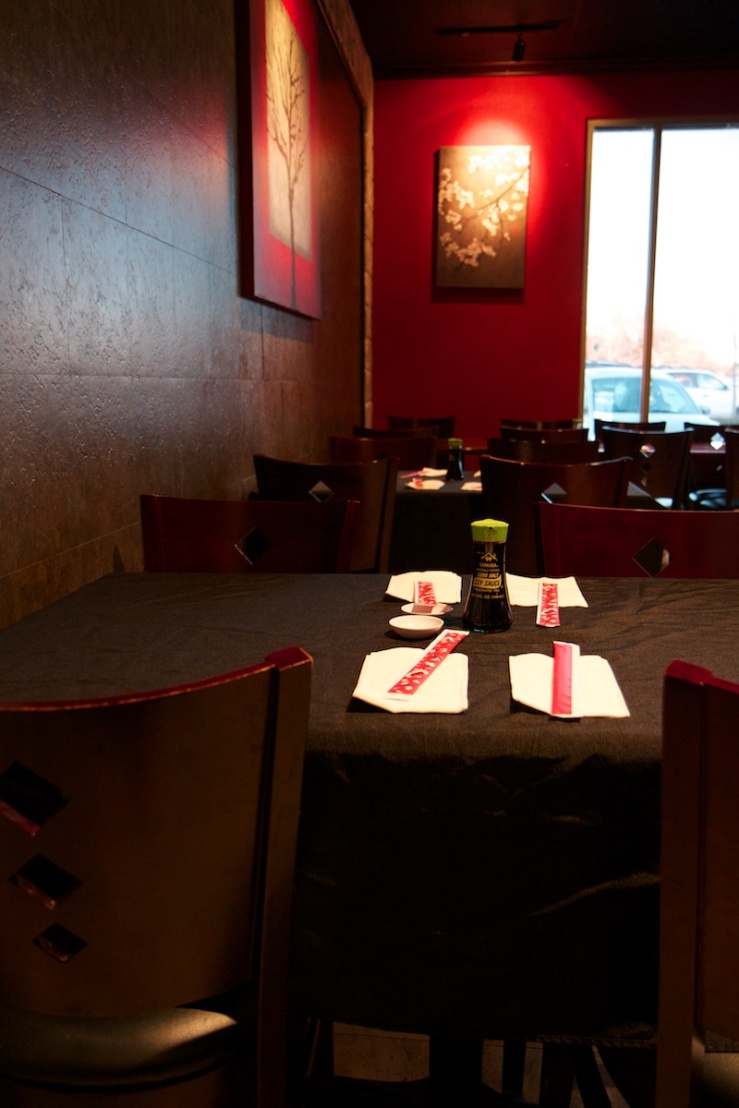 We showed up at 5:30 and were seated immediately.  Business was fairly light, they were about 20% full and it was about the same when we left but with different people.  Our server greeted us quickly and took our drink orders.  My brother and I each ordered a Kirin Ichiban and my mom ordered a 2009 Kenwood Reserve Sauvignon Blanc.  Once she left, my brother mentioned that she was one of the better servers he’s had, so I guess we lucked out ;).

The menu is much like any other sushi restaurant I’ve been to.  A good sized list of rolls took up the last half of it.  Those can be found online on their website.  I would have scanned the menu with my new handheld scanner but the table very quickly filled up as soon as we ordered and I just didn’t get a moment to do so.  Perhaps I’ll return later and do that.  We ordered the garlic sauteed edamame to start.  This showed up very quickly and was very warm and delicious.  There was extra garlicy sauce at the bottom of the bowl once we go down that far.  I thought $5 was a little steep at first, but this was a very good sized bowl and was more than the three of us needed, so I think it turned out to be a good value.

I ordered a dinner combo which came with 5 pieces of nigiri sushi, mixed tempura, a 4 piece California roll, soup and salad.  The soup arrived just shortly before the edamame.  It was steaming hot, one of the stronger bowls of miso I’ve had and was pretty good.  I didn’t actually finish it though as more and more items kept arriving and I was busy shuffling the table around to make room and eat.  That’s one of the problems I’ve experienced with most sushi places when you have more than a couple people.  The number of serving plates that arrive starts to get a little crazy.  One time at Blue Nami by myself at the bar I had something like 5 or 6 plates including my little plate and dipping tray.  Eating sushi can be a game of Tetris sometimes.

My tempura came next, and it was a lot more than I was expecting.  My mom took a piece or two, but I still didn’t quite finish it.  There were long shrimp pieces, sweet potato, onions, potatoes and broccoli.  The onion was one enormous ring.  All of it was good in the sauce it came with. 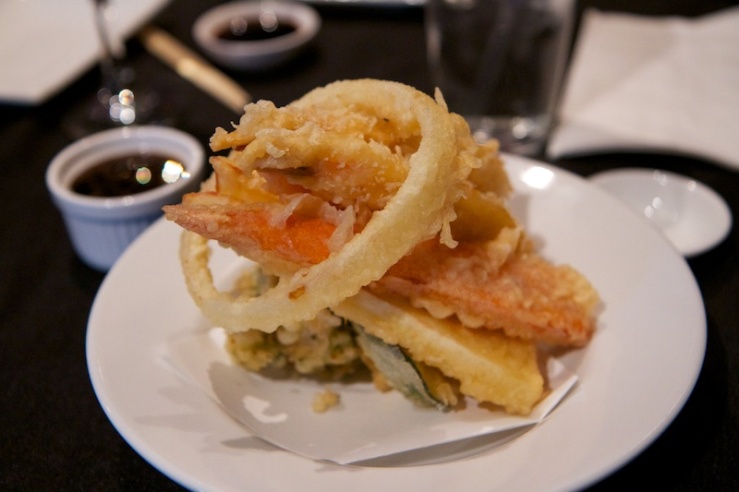 Not long after that, my brother’s agedashi tofu arrived.  It was a really nice presentation.  It had an absolute ton of fish flakes on it, which my brother wished he had thought about and ended up brushing them aside (as you may notice with the other items he ordered, he is a vegitarian).

It was a steady flow of food from then on.  Both my bother and mom ordered two rolls.  For my brother, a vegetable maki and a Go Girl roll.  For my mother, the Scallop Maniac and the Tiger Punch (a special on the whiteboard by the front door).

The Go Girl had cucumber, avocado and crispy carrot strings with a balsamic sauce. 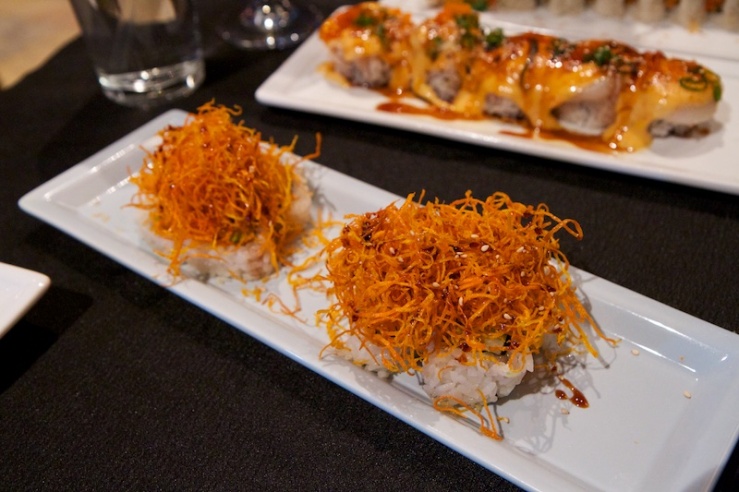 I’m not totally sure what the vegetable maki had in it, but it looked a lot like asparagus, cucumber and bits of carrot. 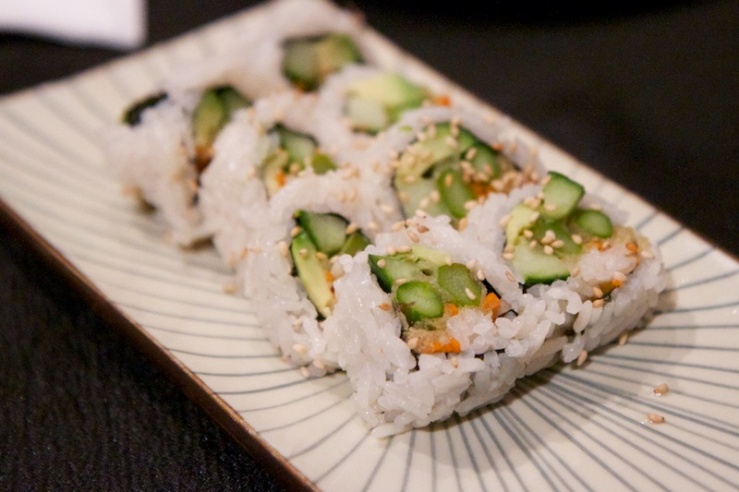 The Scallop Maniac had crab meat and shrimp tempura inside, a large sea scallop with a bit of avocado, and it was topped off with a balsamic and creamy BBQ sauce.  I had one or two pieces of this.  I’m not really into scallops but with everything else, especially the sauces, this was pretty good.  It was a very sweet roll.  The sauce on top was thick and almost looked like melted cheese.  The shrimp tempura gave it a nice little crunch that was a nice counter to all the creamy sauce and soft scallop.

Her Tiger Punch had shrimp tempura, spicy tuna, cilantro, avocado and seared hamachi.  It was topped with sweet soy sauce and (I think) tsunami sauce (I have no idea what this is).  She said she must have mentally skipped over the word “spicy” when she saw it walking in because everything else she saw sounded good.  She’s definitely not into spicy food at all, and this was definitely a touch spicier than she likes.  I ate a few pieces.  It was a little spicy, but it’s more of a cumulative heat that builds over several bites.  She also wasn’t crazy about the seared hamachi and I can’t blame her, the texture of seared fish isn’t particularly pleasant in my opinion.  I’ve heard that searing fish can be a way to hide the fact that fish is getting old.  Whether that’s true or not, the idea has been implanted in the back of my mind and it’s something I think about anytime I encounter seared fish.  The cilantro was a little strong and it’s not something I like.  I also experienced this at lunch where the sushi chef whipped up a nice roll to go with my sushi/sashimi combo.  I removed the cilantro from that roll at lunch after I figured out halfway in that it was the behind flavor I wasn’t really enjoying.  We ended up leaving a couple pieces of the Tiger Punch roll uneaten (I probably would have eaten them if I wasn’t ridiculously full though). 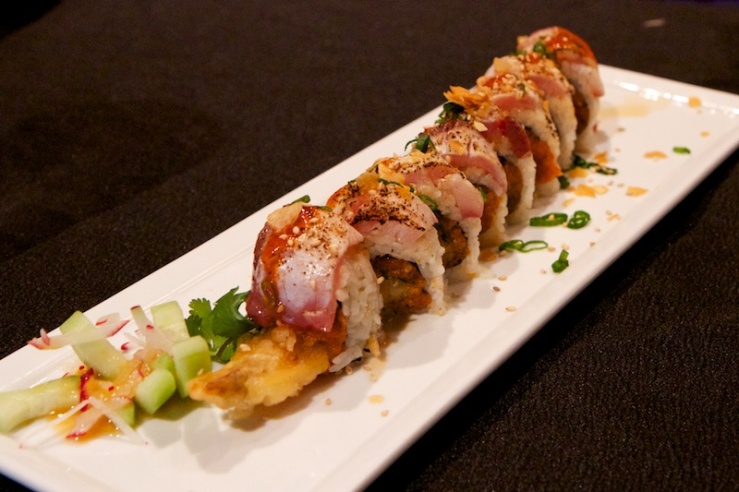 Last to arrive (by about 5 minutes or so) was my sushi combo.  The salad was really good, it had a sweet dressing and was cold and crisp.  The California roll wasn’t anything special, but it was a nice way to go between the nigiri sushi and bites of my mom’s richer more flavorful rolls.  There was a piece each of salmon, tuna and albacore, and two white fish that I wasn’t sure about (I’m still learning how to identify these guys).  The one white piece on the left side was seared and was my least favorite.  All the other pieces of fish were good, especially the salmon which I had saved for last.  I swear, I could eat fresh sake all day long.  One thing I noticed was that the rice did not hold together nearly as well as other places.  From everything I’ve read about sushi in the last few months this seems to be a big deal and we must have had a below average batch of sushi rice.

This was a pretty good dinner overall despite the rice and a few things that are just a matter of personal taste.  Our service was good, the waitress checked on us quite often and as I mentioned all the food came out very quickly and was freshly prepared.  I know this place gets absolutely slammed on the weekends so weeknights might be the best time to come here.  Also if my brother is correct then we may have received above average service, so that might be something to keep in mind.  I’ll probably need a little break from sushi for a while after today.  Actually, who am I kidding, I’ll likely have some next week.