Tonight I ventured further south than ever before for the blog, into Midtown Sacramento!  I’ve had BBQ on the brain now for a few weeks.  Incredible brisket that I had in Texas last month coupled with my friends that live there sending me more photos of BBQ in their neighborhood has had me drooling.  When I overheard a coworker taking about a BBQ place in Sac called Tank House, I knew I had to go.  Unfortunately, that’s not what this post is about.  When I met my friends Dan & Kathy in front of Tank House tonight, the place was packed solid.  I failed to consider 2nd Saturday, a monthly night of music, art and other random festivities spread throughout the area.  We’ve already made arrangements to try Tank House again later this week on a less busy night.  Backup plan, a place just down the street a block or so that they have wanted to try out for some time.

This was Cafe Marika, a tiny little hole in the wall serving Hungarian cuisine.  When I say tiny, I mean tiny.  Unfortunately it was a little busy so I didn’t want to stick my camera is everyone’s faces, but I found this image via Google’s street view where you can see, count them, all 5 tables and 5 counter seats.  We walked in and were…kind of greeted.  A woman behind the counter sort of gestured to the tables and went about her business.  We shrugged it off and joked that this was part of the experience.  Throughout the rest of the visit, however, the woman was relatively friendly and a good server, clearing plates quickly and tending to us frequently.

The menu is sized to fit the space, with just 5 items on it for dinner (on the way out we noticed a board with some specials, so I guess they serve slightly more than 5 things at dinner.  We also joked that not telling customers about the specials was part of the experience).  Just inside the menu was a little piece of paper slid into the beverage half that said “Sorry Cash Only.”  My friend Dan was awesome and ran around the corner to an ATM since none of us had any on us at the time.

Long story short, everything from this point on was pretty smooth.  I ordered a Moosehead beer [$3.75] (had no clue what it was at the time, just liked the name).  This came quickly with a giant frosty mug.  Turned out it was just a basic lager; very drinkable with just about anything.

We placed our orders and were each served two slices of bread with a packet of butter.  This bread was great, super soft and tasty.  Not much butter to go on both slices, but the 2nd came into play to soak up some soup that came with all of our entrees.  That soup was interesting (in a good way).  It had a very thin and watery consistency, yet still quite rich in flavor and it kind of coated your mouth with an oily texture.  A little kick of spice snuck up on you after several sips.  Settled at the bottom of the cup were bits of veggies, potatoes and meat (pork?).

Dan ordered the Pork Roll-Ups in Brown Gravy (tender pork fillets stuffed with egg, pickle, bacon, sausage, onion and spiced cooked in it’s own sauce, served with your choice of rice or spetzels [home make pasta]) [$15.75].  This looked really neat and the bite I tried was pretty good.

Kathy ordered the Stuffed Cabbage (ground pork tenderloin mixed with rice and spiced, rolled in cabbage leaves and cooked in sauerkraut.  Topped with sour cream) [$15.75].  This was excellent.

Finally, my order was the Pan Fried Porkschnitzel (delicately seasoned, breaded pork fillets, pan fried, served with bohemian potato salad or spetzels [home made pasta]) [$15.75].  The potato salad was great and I inhaled it quickly.  The two enormous pork fillets were thin (good thing because this plate looked insane when it was first set in front of me).  They were also incredibly tender and easily sliced up with just a butter knife or even my fork.  The perfect golden-brown breading added a wonderful crunch.  I loved this dish. 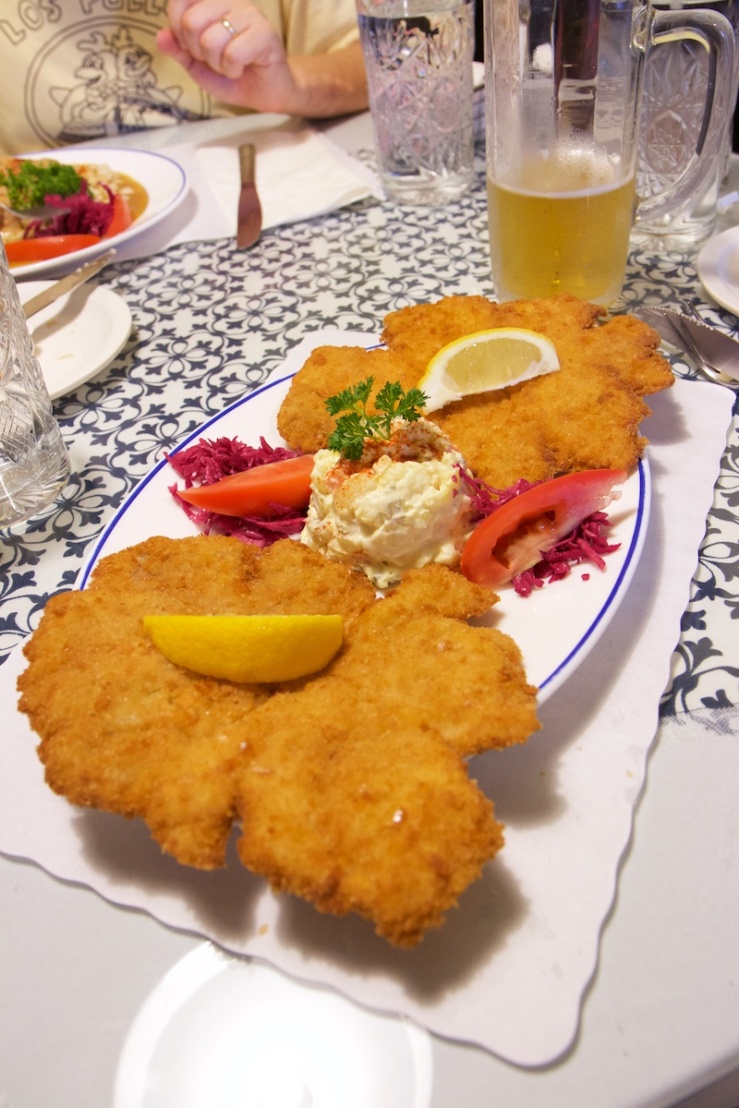 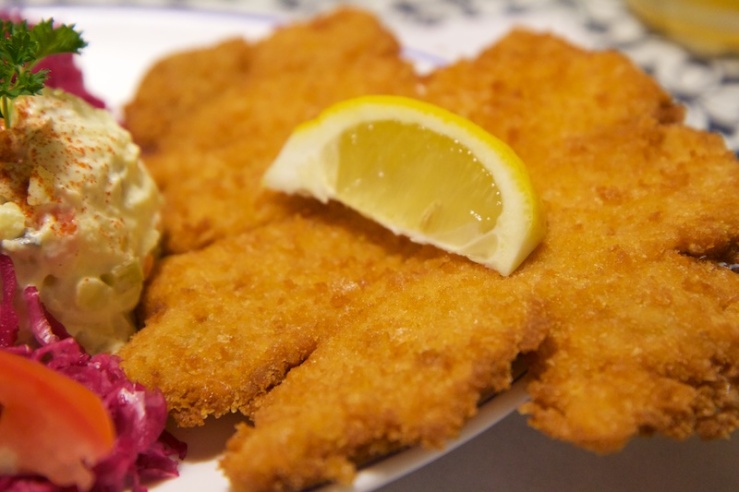 We were surprised at the end with what seemed to be complimentary Apple Strudels [$2.95 according to the menu] (my photo of this does not do justice, the lighting was terribly unflattering on this particular item for some reason).  As far as apple desserts go I’m kind of take it or leave it (leaning leave it), but this was very tasty.  The strudel was flakey and topped generously with powdered sugar and the apple filling almost melted in your mouth. 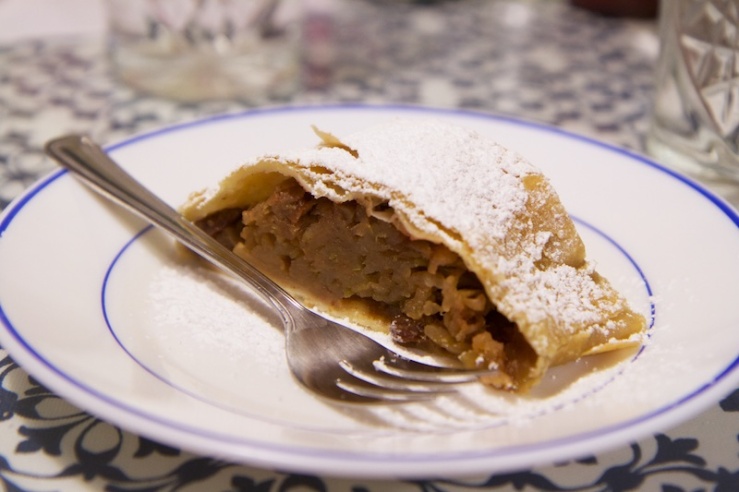 Overall, very, very solid backup plan!  Can’t say I’ve ever had Hungarian food before, but I’m totally down for more in the future now!