Well, my plans for lunch today fell apart.  I was going to go to The Green Boheme, a raw vegan joint tucked away behind Sports Page, but apparently Saturday is the only day they are closed!  I’ll have to try again soon.  I reluctantly drove over to Koisan, a new restaurant in the cursed location that once held Tomi, Da Jung, and at least one other failed Asian/seafood buffet.  I was not excited to come here just due to the history here.  Nevertheless, I walked in a bit before 1PM.

I stepped into the entryway and was greeted after about 20 seconds of eyeing the menus set on the front counter.  I was taken in and to the exact same booth I sat at for my visit of Da Jung last time.  Not a whole lot has changed about the dining room through both Tomi & Da Jung, minus that fact that the Korean-BBQ tables are now gone.  What was the sushi bar at Da Jung has been removed and converted to a conveyer with little dishes constantly on the move.

The host showed me the menus, explained how all you can eat (AYCE) works and also told me about their special for lunch today, a bento box with a handful of different things.  It was slightly overwhelming so I took plenty of time to go over everything once he left.  It would be a few minutes until my server introduced herself and got my drink order.  So they have a full on regular menu, which also is their take-out/delivery menu, where you can order all kinds of individual Chinese dishes.  Then there’s the AYCE Lunch [$13.99] which consists of a combination of salad bar, a variety of pre-made items on the nifty little conveyor belt, and finally a menu of items that will be made to order.  Dinner is similar but with a larger menu and a bigger price [$19.99, $21.99 on Fri/Sat] to go along with it.

To be honest, I was not totally crazy about the idea of AYCA, again, mostly due to this locations past, so I skimmed over the lunch menu.  In addition to AYCE Lunch, they also had some lunch-time bento boxes where you could choose a Chinese wok item.  I eventually asked about the special once more and went with that, because it seemed like a good variety and a good value.  It was a bento box with honey walnut shrimp, broccoli chicken, rice (steamed or fried), salad, gyoza and miso soup [$10.95].  I got a soda to drink [$2.25]. 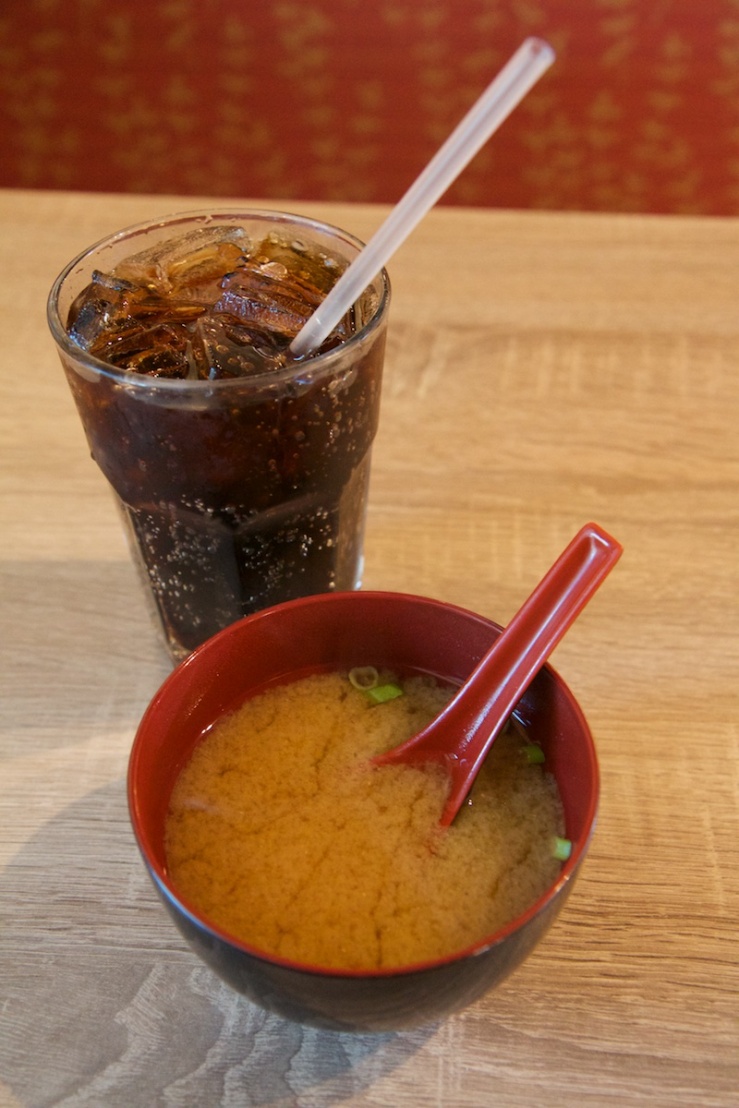 Within a few minutes I had my Mr Pibb and miso soup delivered.  Both were excellent.  The Pibb was nice and strong in flavor, as was the soup which was very hot.  I had to let that cool off a bit.  I was just finishing this up when my bento box was brought out.  It was very snappy, coming just 7 minutes after the soup.

The box was a good size and had quite a bit of food in it.  I went to work.  The salad was very basic, pretty much iceberg with little shaved bits of carrot and the usual sweet/creamy dressing that sushi joints use.  It was cold, tasty and a nice way to start.  After that I jumped around.  I had chosen fried rice.  I doubt this was made to order, but it seemed more fresh than something like you’d get at a panda express or certainly any kind of buffet.  The broccoli chicken looked really boring, but to my surprise it was actually really delicious and whatever sauce it was cooked in was nice and savory. 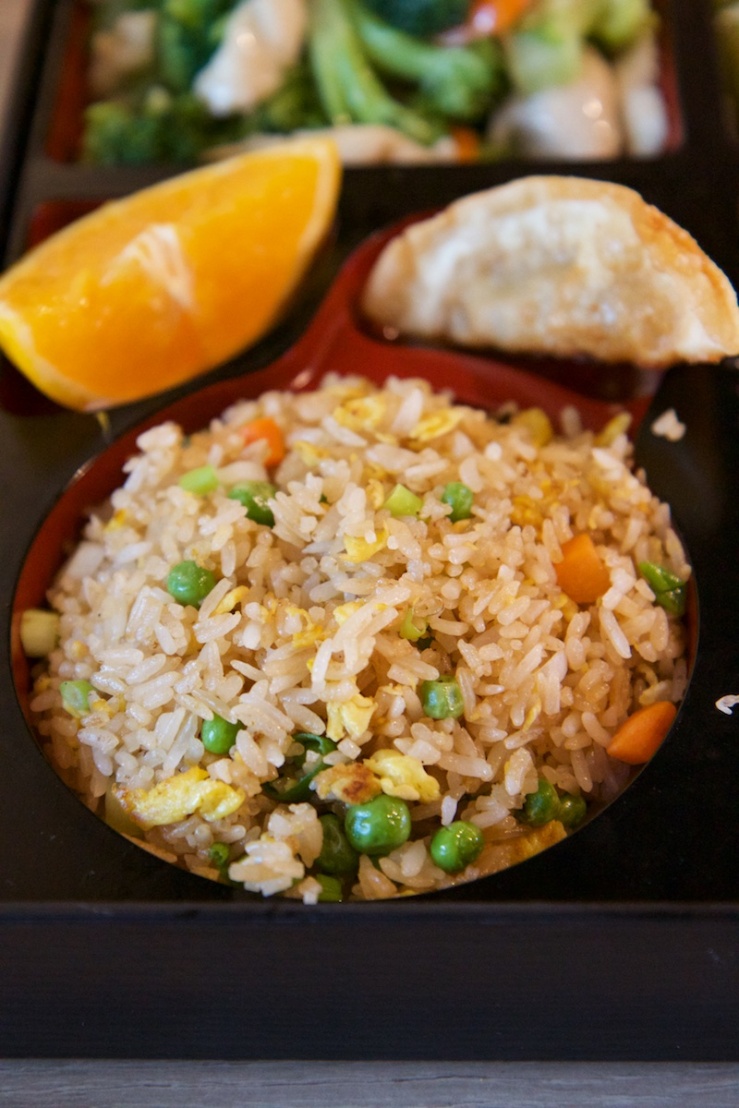 The chicken and broccoli were both very hot.  The broccoli was cooked perfectly, not crunchy or mushy, it was just right in the vegetable Goldilocks-zone.  The gyoza was probably fried for my order as it was hot and crisp.  There didn’t seem to be any sauce for it, but I think it might have been quickly dipped in some before being plated because that saltiness was present.  It was very good.  The honey walnut shrimp was OK.  It was hot and the flavor was decent, but I didn’t find it to stand out in any way like some of the best of this dish in Roseville do (see Leo’s Kitchen or Bambu for outstanding versions of this dish).  The walnuts were not very sweet like most places have them.  Finally, the orange was incredibly ripe, juicy and sweet.  A perfect ending to a surprisingly satisfying lunch.

I definitely had my reservations coming in here but they cleared those away.  While the food was good overall, the service was even better.  The host, my main server and a couple of the other servers that I interacted with were all excellent and seemed very eager to please.  I might actually be inclined to come back and try the AYCE, both due to this initially good experience, and also because the sushi is made to order (a-la Raku Sushi), so It has some promise of being much, much better than previous businesses here.