Last night I finally made it out to Monsoon Cuisine of India.  This Indian restaurant seems to have moved here from downtown Sacramento, taking the place of Bombay Bistro in the Hobby Lobby shopping center.  They opened back in March.  I tried to come here for dinner last week but they were closed when I arrived at around 5.  The website says they close after lunch at 3 and reopen at 4:30.  So either that’s out of date or they had some issue.

Anyway, last night I made sure to wait until later and arrived at about 7:15.  The place has had a significant makeover inside.  Gone are the carpeting, white walls and cramped seating.  The walls are now painted a bold red with black trim and the flooring is all a dark hardwood.  The seating is much more sparse.  In fact when I first walked in I didn’t think they are busy at all, but once my eyes adjusted to the lighting I realized that they were nearly packed.  Had there not been the little 2-seater table available I would have either been sitting at the one remaining huge table for a group, or waiting until someone left.  There are big gaps where there is just empty floor space.  It’s a little weird.  Decorations are limited to some colorful paintings on a couple walls and a fountain near the front door which was dry, probably due to the drought.  It’s fairly dark due to the tinted windows, however the front doors and window above them are not, so there is a bright beam of light shooting in down one side of the restaurant (where the buffet is).  If you happen to be facing that direction it’s probably a little annoying.

I was greeted within 10 seconds as I meandered up to the front desk/counter area and the host (/manager/owner?) appeared from the middle of the room to seat me.  Behind me was the buffet, sitting unused for dinner.  They serve it 7 days a week for lunch and, I think, only on Wednesday for dinner.  I looked over the menu for a minute, hoping for a saag paneer and maybe butter chicken.  Not seeing saag paneer I kind of did a flip flop and picked out a chicken dish with spinach and a paneer dish with a butter masala sauce.  These were the Paneer Butter Masala (cottage cheese cooked in butter-infused tomato sauce and dry fenugreek)[$11.95] and Chicken Palak (chicken smothered in creamy spinach sauce)[$11.95].  I got a mango lassi (refreshing mango yogurt drink)[$2.99] and a water to go with these.  Rice is not included, so I added some for $2. 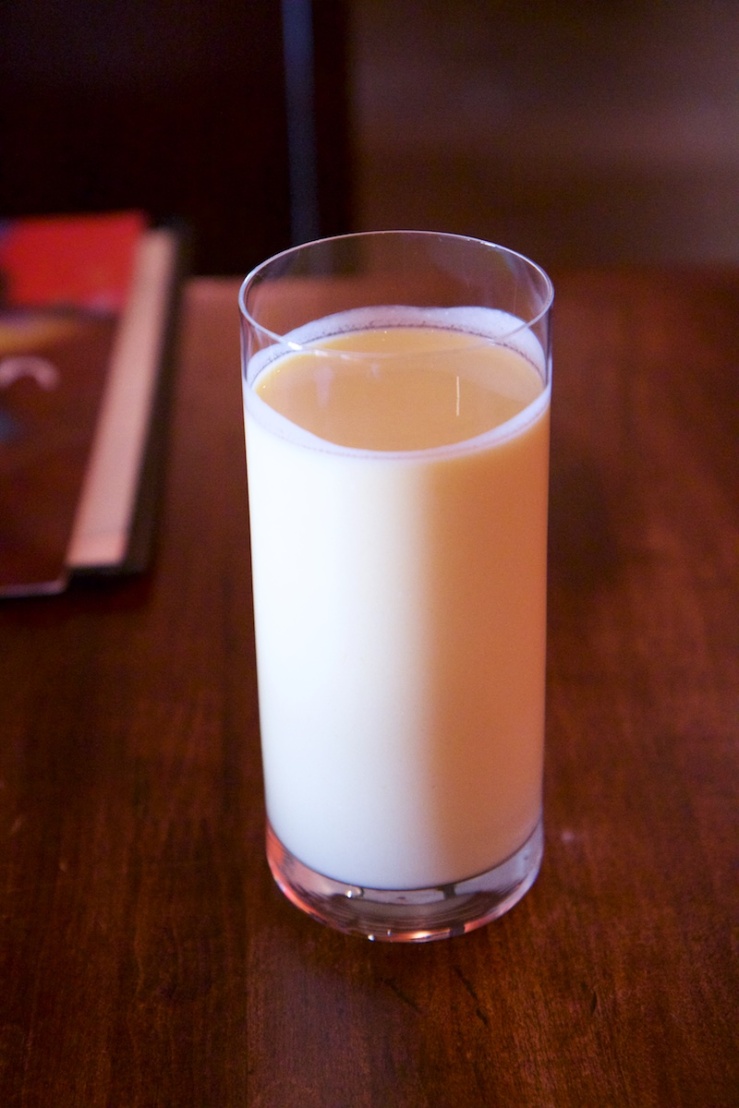 The mango lassi took about 7 minutes.  It was a very light orangish-yellow color with a thick and creamy consistency.  It was more tart than sweet and was also close to room temp, which I think contributed to the tartness.  I did not really enjoy this. A couple minutes later I was served a complimentary appetizer of papadum, a crisp, seasoned cracker-like sheet, rolled up in a basket.  It was accompanied by green and tamarind chutneys.  This was very good on it’s own and even better in both of the chutneys.  I tore through this quickly.

From here it was a fairly long wait until the main dishes were brought out.  About 30 minutes.  There was a large group of 12 or more that were served sometime in the middle of that, so the kitchen may have been backed up with their order.  Anyway, once they arrived, my little table was packed with three large bowls and a big plate.  I was kind of surprised with the serving size, it was huge.  I ended up taking probably 2 more meals home with me. 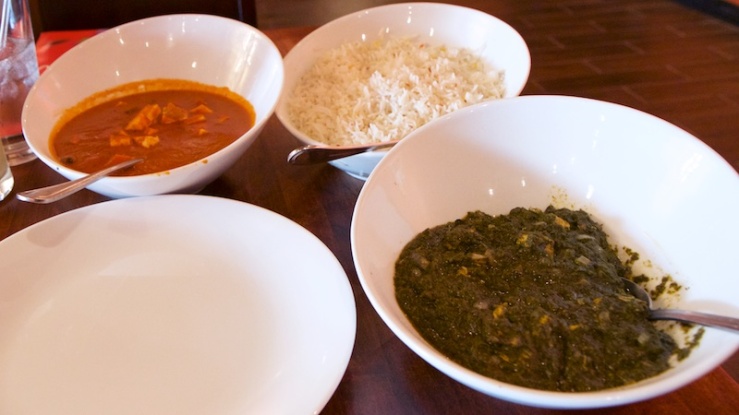 The paneer butter masala was basically just the cubes of firm cheese (which were in huge supply), swimming in a thin, bight red-orange sauce.  While enjoyable for the most part, it was a bit one-dimensional.  The sauce just wasn’t very complex.  It was a good thing I had the chicken palak to go with it.  That was very good.  The spinach sauce was delicious and creamy and had a nice texture.  The chicken was tender and flavorful itself as well.

One of the servers came by and asked if I was finished, and I asked to take the rest to go and also for an order of the mango crème brûlée (rich mango custard base topped with hard caramel).  They had several delicious-sounding desserts that I wanted to try, but I knew I would always wonder about this if I didn’t check it out now.

He came back with some containers and a bag and left them at the table.  Admittedly I was a little annoyed that I had to box this up myself.  Within another minute or so he returned again with the dessert.  I thought that was awfully fast, and I quickly found out why.  They don’t torch it when you order it.  The whole thing was cold, including the caramelized top which was soft and almost leathery.  Instead of a mango flavored custard it was a pretty traditional custard with chunks of mango in it.  I was hugely disappointed with this.

Overall the food was very hit and miss.  The service was about the same as well.  Some interactions were very brief and not fulfilling, although the host/manager was very nice.  The whole experience was unfortunately lackluster.  Considering we have quite a few good Indian restaurants here in Roseville, including Mehfil just one shopping center over, I doubt I will find myself here again.