Here’s a fun treat, ice cream!  But not just normal ice cream.  You can get that anywhere.  Sparkles Ice Cream is located in the Quarry Ponds Town Center in Granite Bay (on Douglas before you hit Barton).  They don’t keep ice cream frozen and ready to eat in the store, instead they mix and freeze it right in front of you using liquid nitrogen!  The claim is that, by freezing it nearly instantly on the spot, they avoid larger ice crystals from forming due to temperature variations in transport/storage with traditional ice cream, resulting in a smoother, creamier final product.

I headed in with my grandma at about 6:20pm.  We were greeted right away by the three people behind the counter.  We were given a quick rundown on how they make the ice cream, the flavors and mix-in items.  It was a bit overwhelming and we took probably about 5 minutes just going over all the options.  While we were deciding what to order we were handed a couple samples as they worked on other orders and, as it sounded, worked on perfecting a salted caramel flavor.  Finally we settled on our selections and stepped up to the counter, luckily right before a bit of a rush hit.  She went with the smallest size in black cherry and no mix-ins [$4.75].  I went with a regular size vanilla with cookie dough and Reese’s Peanut Butter Cups [$6 + 0.50 for the 2nd mix-in].

They start with a metal mixing bowl and add cream, sugar and syrup for flavoring, then toss in the mix-ins and head over to the corner where the nitrogen vessel is (there are windows where you can walk around to get a closer look from) and fill it up with the -376ºF liquid.  Nitrogen boils at -320º.  With the ambient temp of the store probably close to 400º warmer than that it’s almost violently vaporizing from the moment it leaves the nozzle.  From there they bring the bowl to the front counter where they stir constantly, scraping the bottom now and then to keep it from freezing to the bowl, and rapidly cooling the ingredients.  See the bottom of this post for some video of them making our orders.  They went back for another quick blast of nitrogen once or twice, then scooped it out and put it in a cup (waffle cones/bowls also available).

When we were ordering, the cashier warned us that the serving size was generous which prompted my grandma to go for the smaller size.  I definitely should have followed suit because mine was a monstrous tower of ice cream.  Most of it was well above the rim of the cup.  I might have eaten half of it.  So the verdict, was this ice cream better than most?  I would say yes, but not by a huge margin.  It did seem creamier and smoother than a lot of ice creams.  Flavor-wise it was pretty on par with the majority.  Both the cookie dough and Reese’s cups were in huge supply.  If I were judging strictly on flavor I would go with Gunther’s and possibly even Cold Stone.  But what no other shop can match is the cool factor (pun intended) of watching them make it with liquid nitrogen. 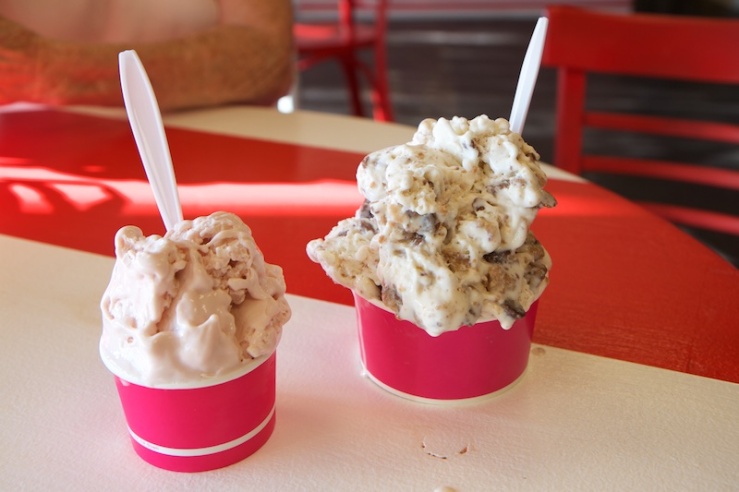 My only major complaint here is that the viewing area is fairly limited, which is a shame since it hampers their biggest strength.  I mentioned that they have some windows over by the nitrogen tank.  The problem with those is that there is a counter with stools right up against them, which is a shared space for Sparkles and some other Quarry Ponds eateries, so if anyone happens to be sitting there you’ll be peeking over their shoulders.  As for the area up front where they mix, there is a window, but it’s at a strange height.  I am 5’11” and I felt too tall to see though the window, but not nearly tall enough to look over top of the frame.  They need a bigger, solid piece of glass to look through.  Adding to that, the counter where they were mixing was right at the front door, which gets crowded quickly with just a few people in line.  They do have another counter that faces the seating area, but they only used it briefly when they were in the middle of the short rush.

I still think it’s really neat and would recommend checking it out for the show alone.  Of course, the ice cream is pretty good on top of the physics display. 😉