Today I decided I better stop being lazy and get to another post.  And with that I picked out a spot that’s been open for a while now.  That place, tucked back into a corner behind Dimple Records on Santa Clara at Douglas, is Pita Kitchen Plus (I’m not sure what the plus is for – they are also part deli/bakery so maybe that’s it).  This is a Mediterranean restaurant which is the 2nd of it’s kind.  According to their website they have another location on Arden and have been in Sacramento since 2008.

I arrived right at 6PM to a very quiet dining room.  I was the only customer for my entire visit, nearly an hour.  I was greeted right away by the only other person I saw who was both the hostess and server.  She took me to a booth and asked if it was OK, then handed me a menu and let me look over it for a minute while she went into the back and turned on some music in the dining room.  She returned a moment later to take my drink order.  I just went with a Dr Pepper [$2.49].  I definitely needed some time to decide so she left me to study the rather large menu for a while. 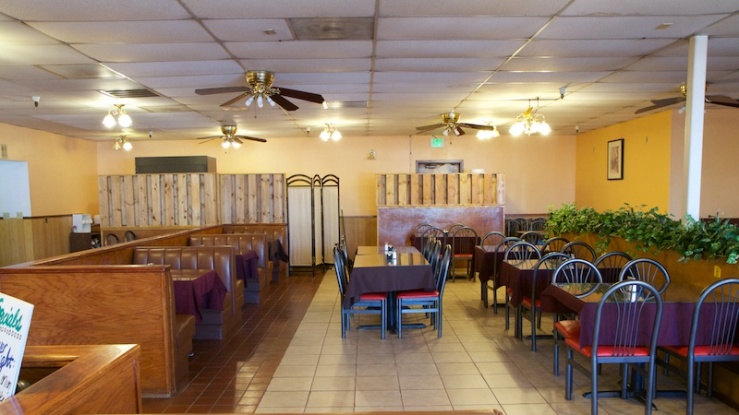 I figured I wanted to get some humus as an appetizer and then pick out an entree.  The appetizers are all well priced, most are in the $3-6 range.  Sandwiches (in pita bread) look to be a good lunch option at about $7 a pop.  I was looking for something a bit more substantial as I was pretty hungry so I continued on past the soups into the main dishes and eventually settled on the Shish Tawouq (Curry marinated boneless skinless chicken breast, grilled with tomatoes and onions. Served with rice, Hummus, and pita bread)[$18.95].  Since this conveniently came with the hummus I was craving I picked out another little appetizer, a Kibbeh (Ground bulgur [cracked wheat] and onions stuffed with our freshly minced meat, onions and spices shaped into a football and deep-fried to a golden crisp)[$2.75]. 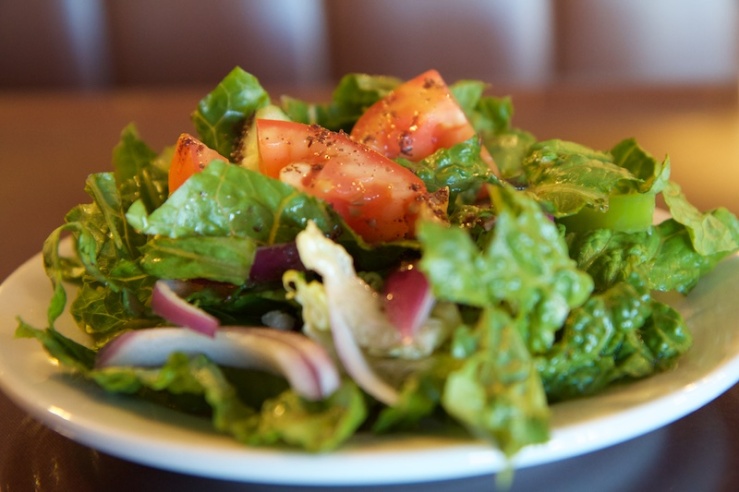 Within about 10 minutes of ordering I had the salad for my entree as well as a complimentary starter of pita chips and dip.  The salad was super green and fresh with slices of red onion, bell pepper, cucumber and ripe tomatoes in an olive oil and vinegar  dressing.  The pita chips were nice and very crunchy.  This greenish dip that came with it was very light and cool.  If I didn’t have a bunch of food coming I probably would have demolished this whole basket. 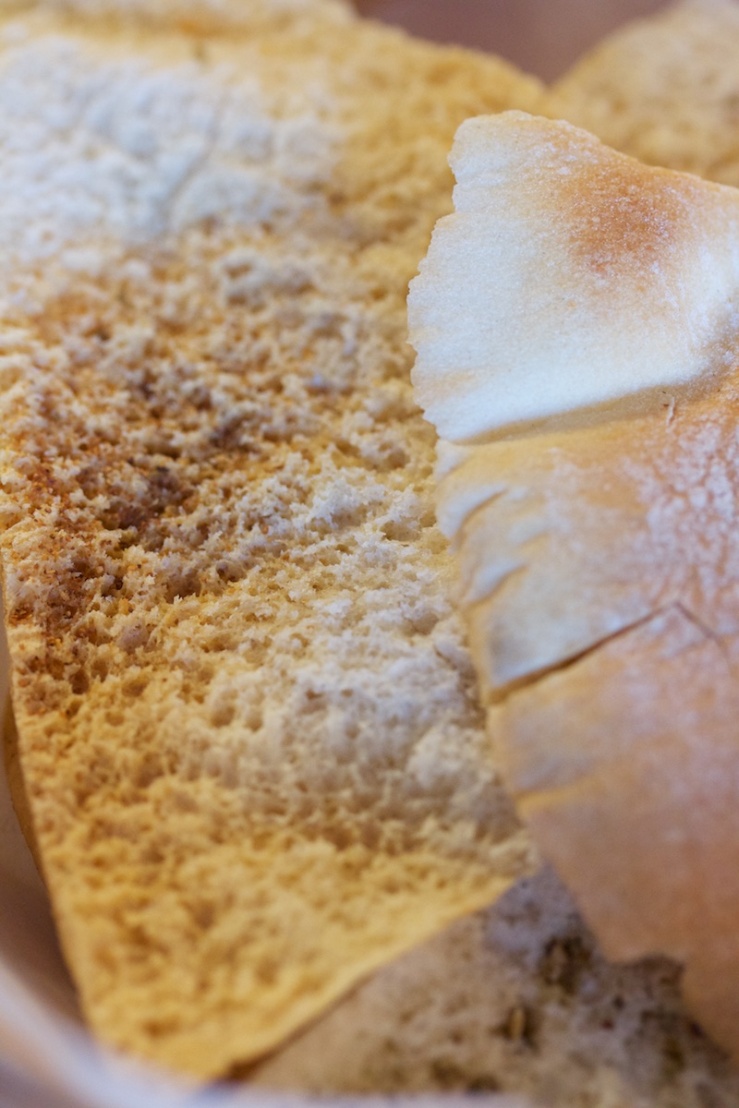 My entree showed up pretty quickly, just 7 or so minutes after the salad and chips.  It was a pretty big plate.  Arranged around a big mound of rice were slices of grilled chicken, two tomato halves and a couple big chunks of red onion.  Off to the side was a good-sized serving of hummus.  Two halves of warm pita bread were served in a side basket, wrapped up in a napkin to keep the heat in.

Almost everything about this plate was awesome.  The rice was tender and tasty, the tomatoes nice and juicy and the onions…oniony.  The hummus was amazing as was the soft, warm pita bread I used to scoop it up.  The chicken, unfortunately, was the weak link here.  It was overcooked, pretty dry and a bit tough.  Most of it anyway – a few of the thicker pieces weren’t that bad.  Coming to it’s aid was the creamy, oddly pinkish-colored garlic sauce.  That was really delicious and I used just about the entire little dish to give the chicken a bit of moisture and additional flavor. 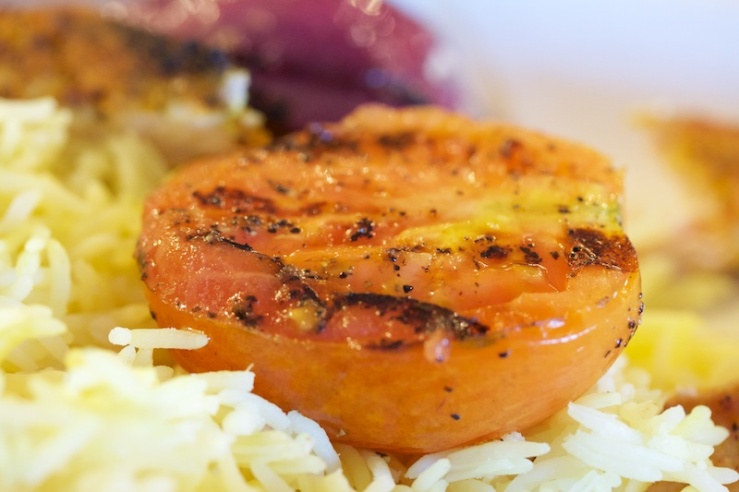 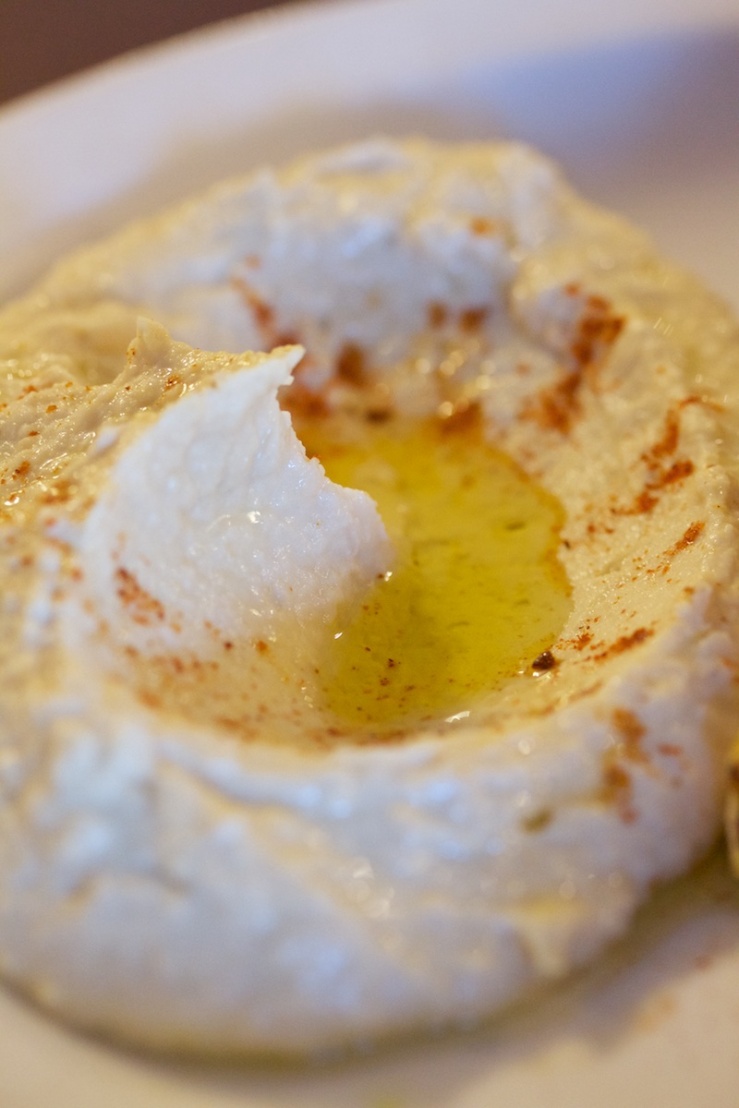 A few minutes into my main dish my server returned and delivered the kibbeh, which she admitted she had forgotten about but luckily the cook had remembered.  As it happens I had forgotten about it too so it was almost like a bonus.  This was really interesting.  I cut the crisp little oblong kibbeh in half to reveal packed, steaming hot minced meat inside.  The texture of the crunchy exterior was strikingly similar to a churro, so much so that at first I could have swore I tasted cinnamon, but it was just my brain playing tricks on me.  The spiced meat was really savory and delicious and I loved the crunchy shell.  I would order this again in a heartbeat.

After my meal, along with the check, I was given a couple small pieces of baklavaa (fill strudels stuffed with walnuts and cinnamon,baked and lightly topped with our homemade orange-blossom sugar syrup)[$2.95] on the house.  These were freakin’ tasty, super sweet and flakey. 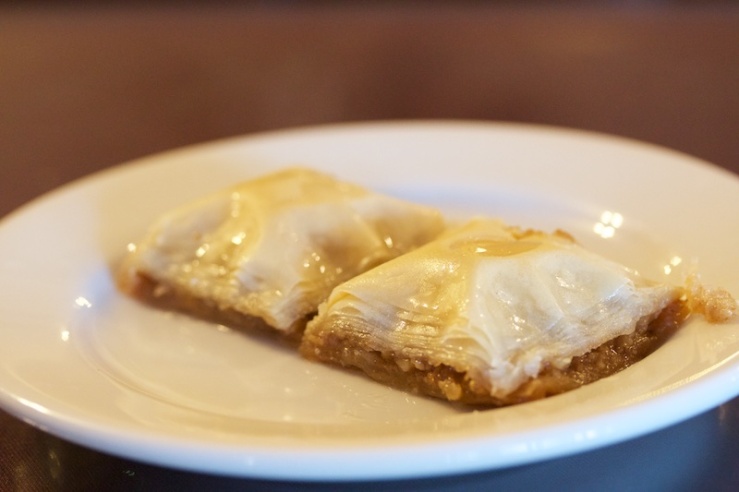 Other the dry chicken, everything else was really good, the server was friendly and attentive and I would be inclined to return and try a non-chicken dish in the future.  I do hope that this wasn’t a typical amount of business since it was Monday, because if that’s the case then they won’t last much longer.