For dinner on Thursday night I joined my mom and grandma for dinner at House of Oliver, a new wine lounge that opened about a month ago at Douglas and Sierra College.  I rarely drink wine so this is going to focus primarily on the food.  I arrived at about 5:30, a couple minutes after the others.  Parking in this little lot is tough sometimes.  They do have a valet if you don’t feel like parking the extra 200ft away by T-Mobile.

The lounge was busy when I headed inside.  There were maybe a few small tables available.  I didn’t take much time to look around and continued through towards the back and out the side door to the patio.  This area was also fairly busy.  The angle of the sun allowed most of this to be in the shade at this time as it moved behind the next building.  A few umbrellas offer shade earlier in the day.  A trio of water fountains sit in the middle and somewhat separate the front from the back patio.  In the front it’s pretty much all little tables while the back has some comfy-looking patio chairs and couches, all under one giant umbrella.  A wall with some nice planters blocks the view of Sierra College and other parts of this shopping center. 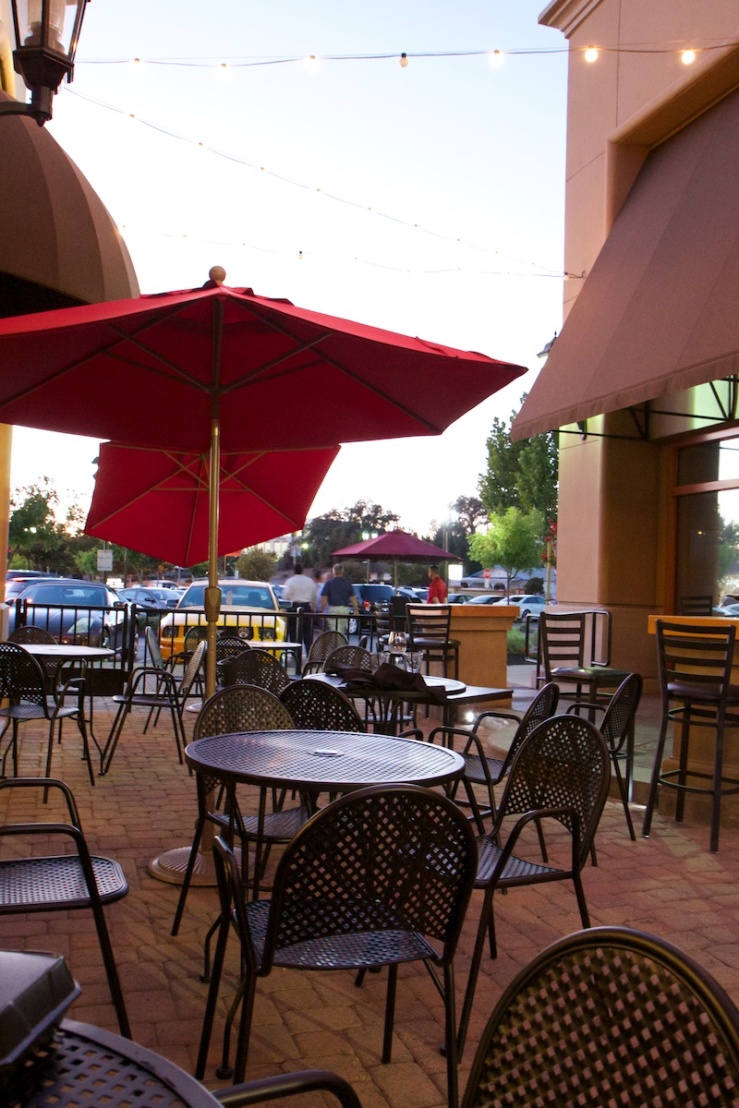 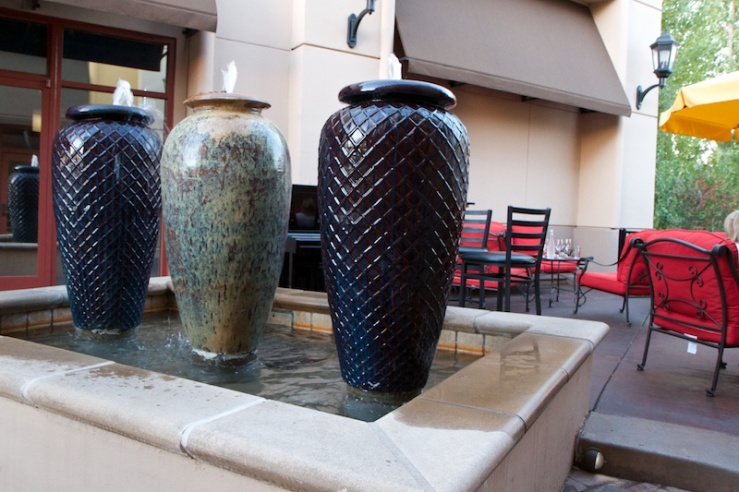 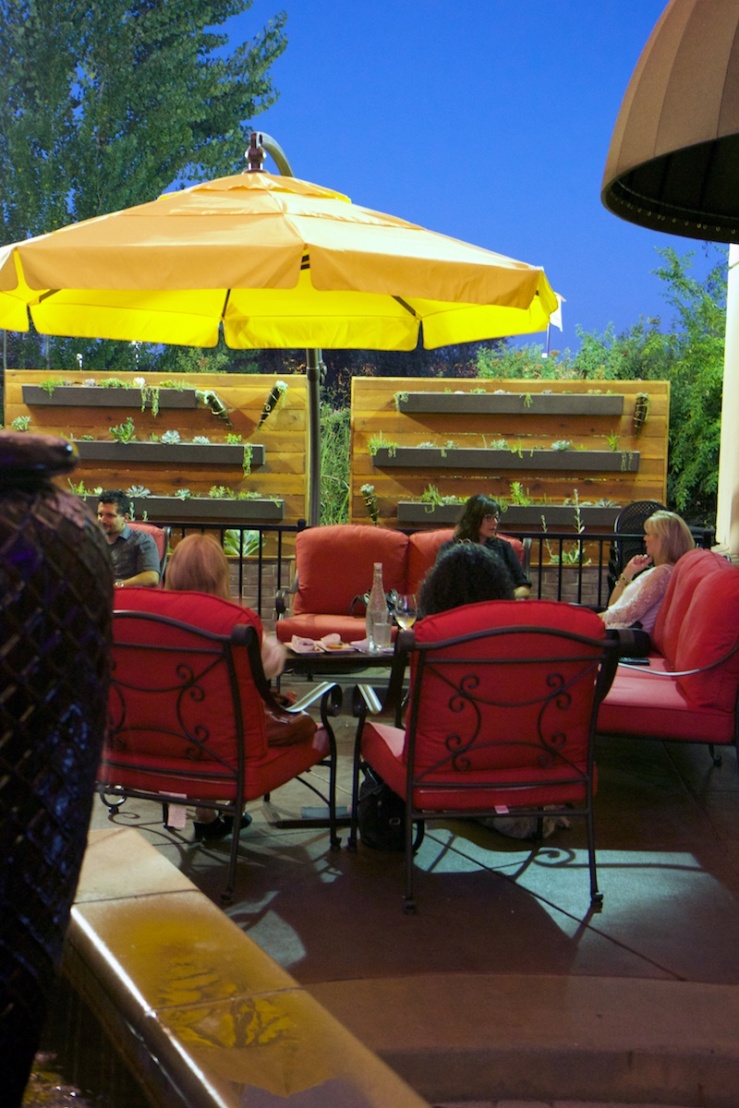 We sat next to the fountains, as well as the door to Sumo Sushi.  My mom had been told by one of the servers that the patio area is shared by both, although Sumo customers rarely seem to use it.  He also mentioned that we were welcome to order from both.  As I was getting settled a server stopped by to see if we were ready to order drinks yet, then realized I would need a menu and went off to get a third one.  We all took a while to look over the whole thing, picking out drinks, an appetizer and eventually dinner as well.  A new server stopped by to see if we wanted to order drinks so we did so with her.  I thought she seemed familiar.  By the end of the night I was 95% sure this was the same server I had at La Provence on both of the visits I made in that post. 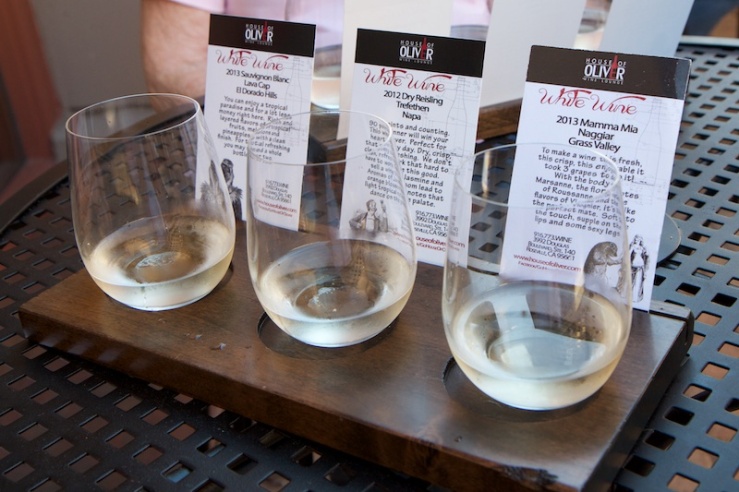 My mom and grandmother each ordered a flight of three white wines (California Dreaming)[$10] and I went with something from their fairly limited beer selection, a Lost Coast Alley Cat Amber (12oz)[$5].  These all came out relatively quickly.  Our server mentioned something about bringing waters but she must have forgot.  10 minutes later our appetizer showed up.  We ordered the Mixed Cheese Board (Triple Cream Brie, Humboldt Fog, Petit Basque & Aged Gouda with stuffed apricots, crackers, nuts & artisan breads)[$14].  This was lacking the breads so we had a lot of cheese to go with a pretty small amount of crackers.  We made it work though.  The triple cream Brie was definitely the favorite of the bunch.  It was incredibly rich, smooth and creamy.  Humboldt Fog is kind of a bleu cheese made from goats milk.  It was really soft and while parts of it were on the stronger side, it was overall surprisingly mild.  The Gouda and Basque were both excellent and were the only firm cheeses here.  Overall pretty tasty cheese board.  Definitely needed some more crackers/bread though. 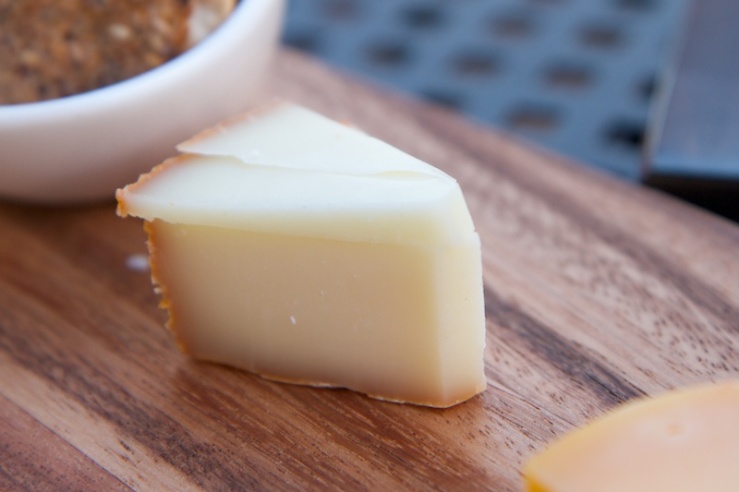 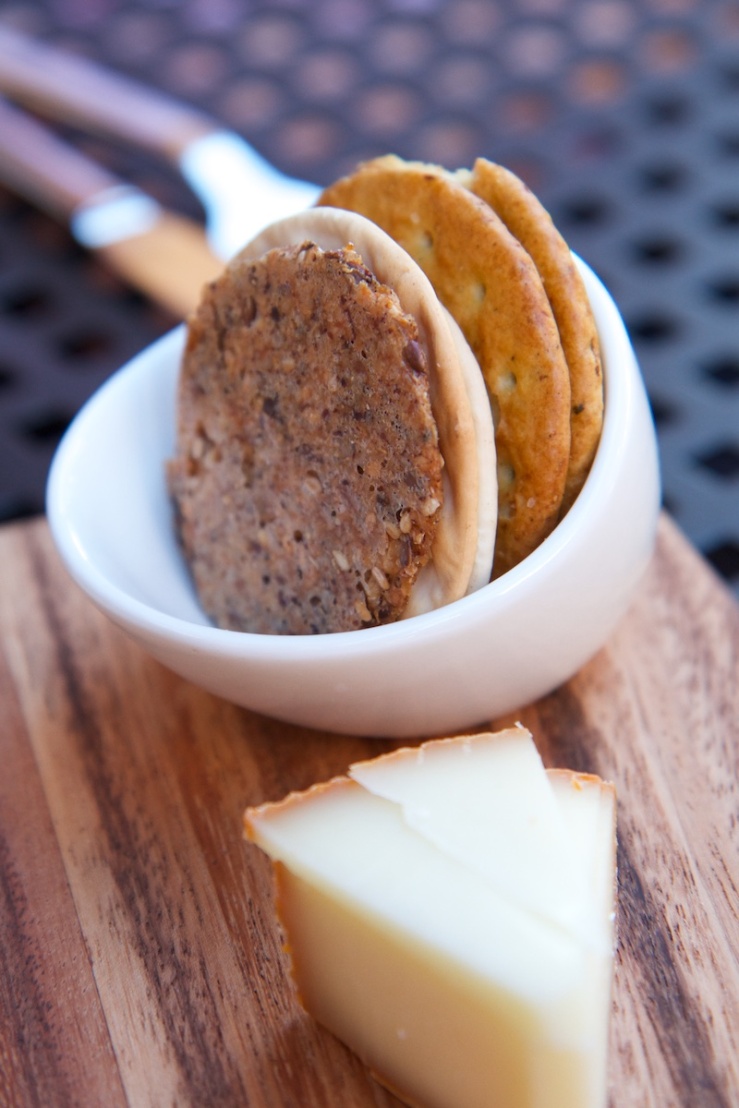 Just before we had finished the cheese board I received the first part of my order.  I had originally intended on ordering one of their main items, but ended up deciding that neither really grabbed my attention enough to settle on.  Instead I ordered the Tomato Bisque Soup (served with a classic cut grilled cheese sandwich)[$7] and also the Delicious Warm Goat Cheese Salad (romaine lettuce & spring mix, red onion, tomato, walnuts, dates, goat cheese, crostini & balsamic vinaigrette)[$9].  The tomato bisque was what had arrived. 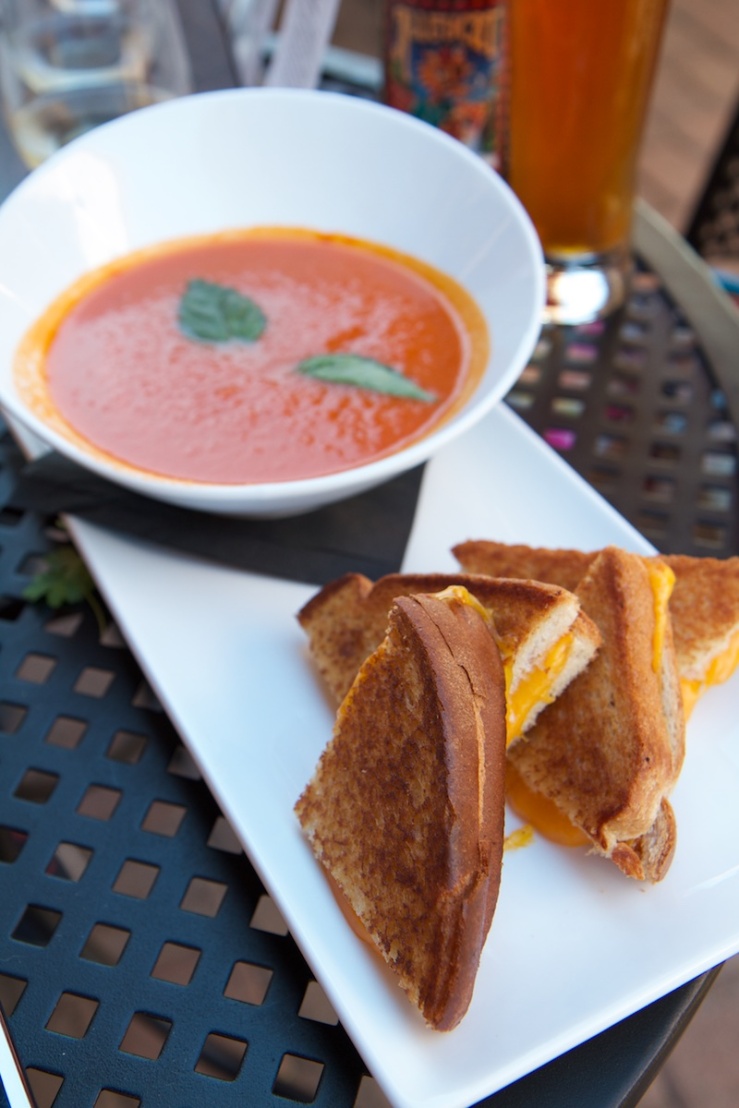 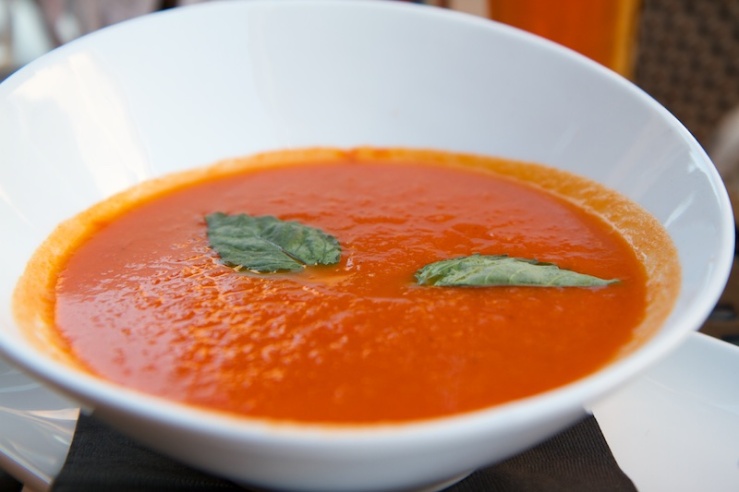 It was a good sized bowl of soup accompanied by a basic grilled cheese sandwich.  The sandwich wasn’t really anything too special, it seemed to simply be sharp cheddar on wheat and was a bit small.  For the price it was fine though.  It was pretty good dipped into the bisque.  The bisque itself was somewhat thin and more tomato-y than the creamy bisque you see most places and was not at all sweet.  It was decent.  I definitely prefer the creamier style though.

Before the rest of dinner came out my mom and grandma ordered a bottle of one from the flight that they enjoyed.  It was 20% off, though I’m not sure of the reason.  Might have been a happy hour thing.  This was the 2013 Mama Mia from Naggiar Vineyards [$24]. 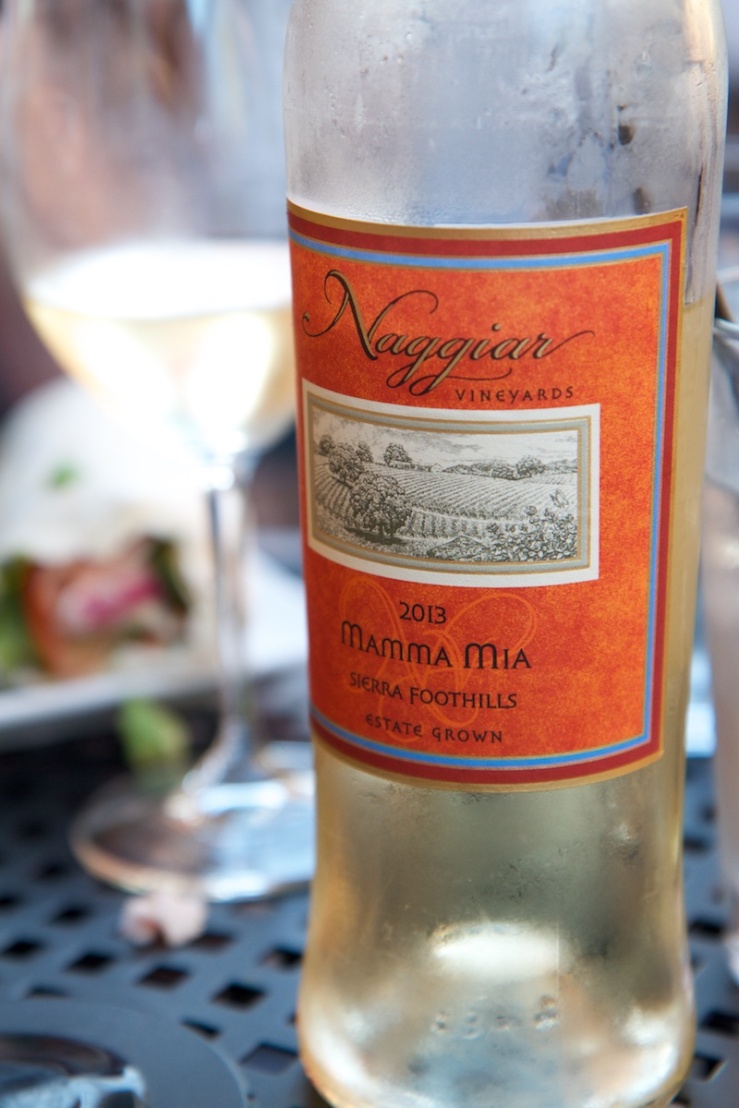 The pacing was slower than a typical restaurant, but given the lounge atmosphere and general vibe it was fine.  The last items came about 20 minutes following my bisque.  My grandma had ordered The Classic Wrap (Man-sized wraps stuffed to your delight with turkey or roast beef, cream cheese, avocado, lettuce, tomato, onion & pepperocini)[$8.50].  This thing was massive.  Bigger than a burrito at Chipotle.  Clearly half of this was going home for lunch the next day.  It looked great and she enjoyed it.  The wraps seem to be one of the best values on the menu.  My mom got the Cheese Tortellini ‘A La Milanese (Garlic, sundried tomatoes, cream, fresh basil & Parmesan)[$13].  This was served in the same sized bowl as my soup and was a solid amount of tortellini. 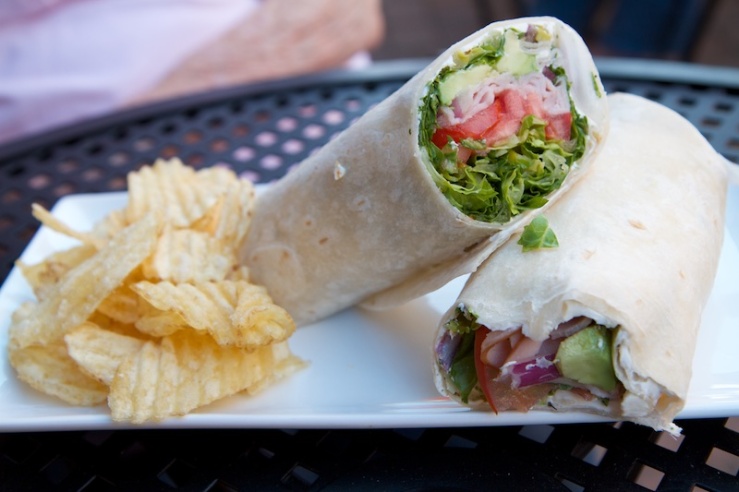 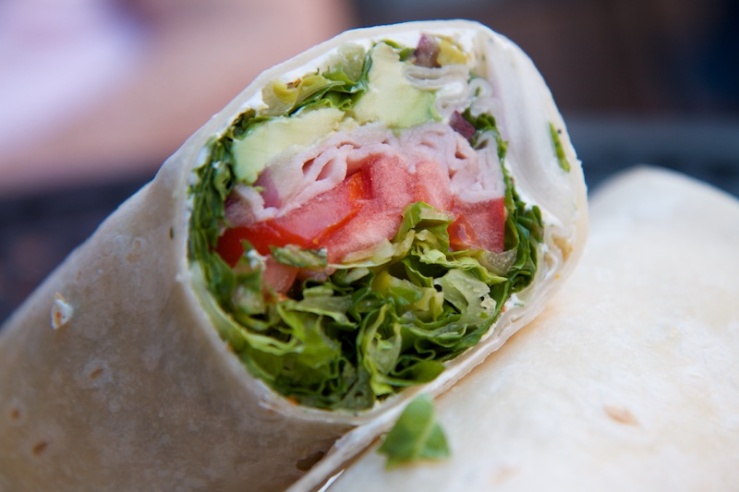 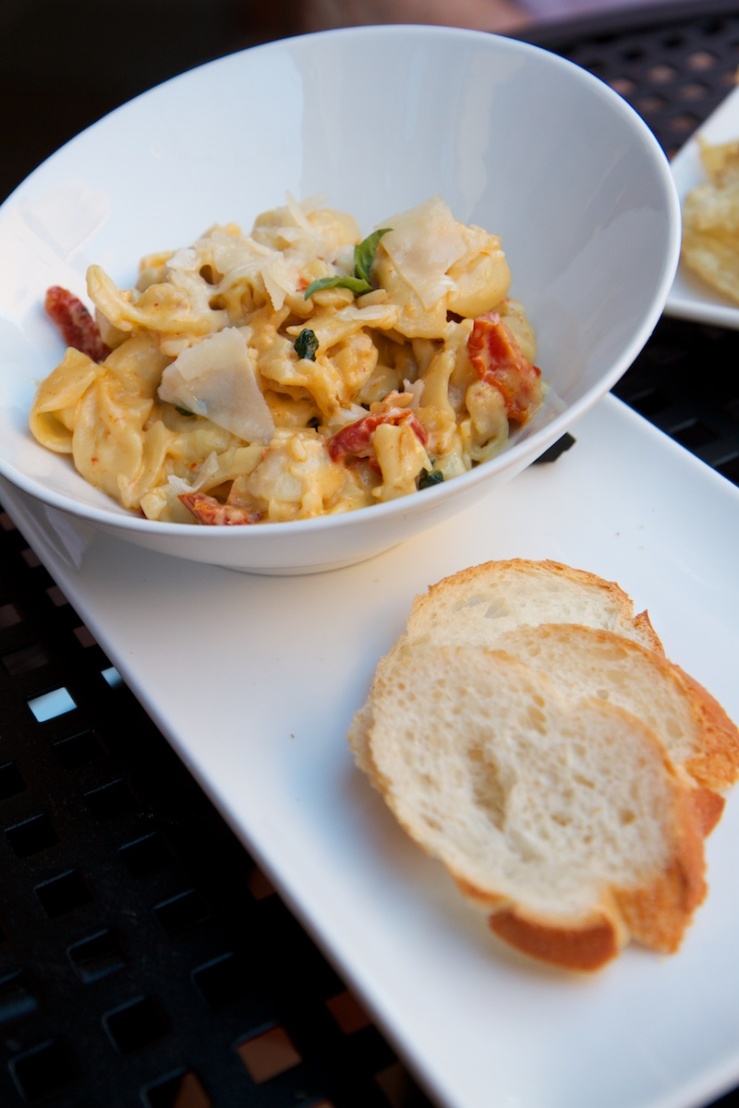 My warm goat cheese salad arrived last by a couple minutes.  It was a pretty good size, though the shape of the plate was a little awkward.  I definitely lost a few pieces here and there over the edge.  Overall I thought this was very good.  All the greens were nice and fresh.  Much of the goat cheese was melted over several pieces of crostini while the rest was spread throughout the salad.  It was all intensely rich.  The balsamic vinaigrette was the perfect amount to add to the salad without overwhelming it. 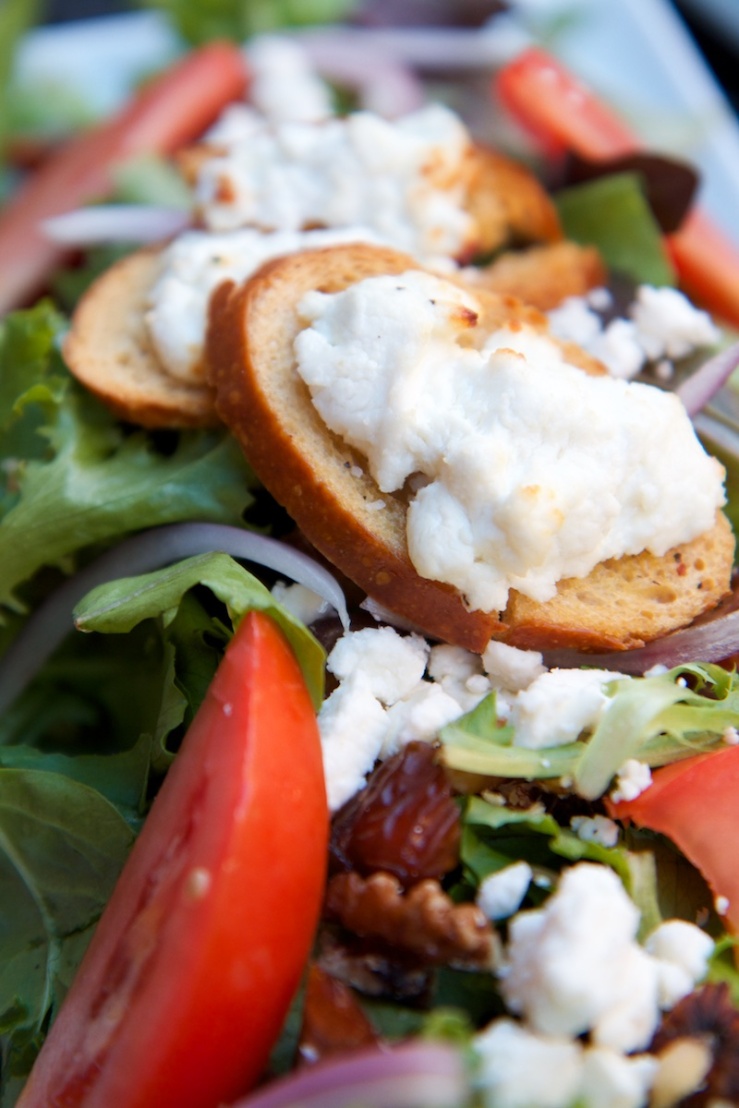 To finish dinner off I ordered the Creme Brûlée [$8].  This came in a little ramekin and had a nice toasted, glassy crust.  Underneath that was hiding one of the thickest custards I’ve had in a long time.  It was delicious.  A bit small for $8 though.  It came with a raspberry, on top of the same raspberry sauce that was on the cheese board, and a couple little pieces of dark chocolate. 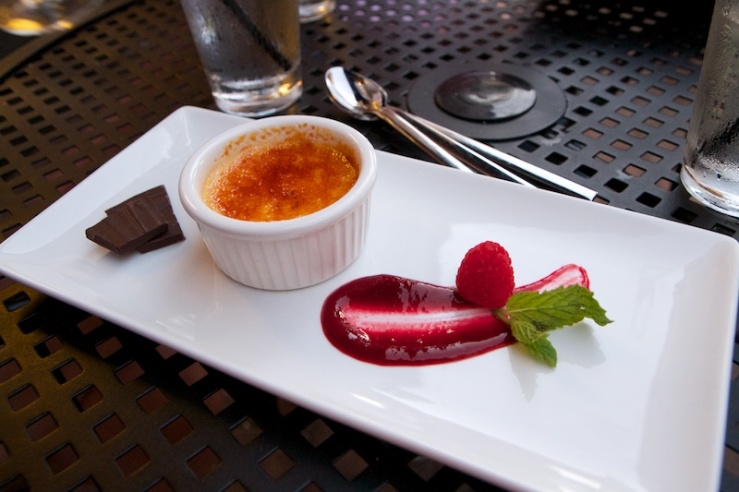 By about 7:30 when we were heading out, a jazz duo of a pianist and saxophone player were warming up for an evening set on the patio.  With the sun set and the string of lights adding a little mood to the patio, this was probably going to be really nice.  A lot of people had cleared out by this time, but even as we we left there were newcomers trickling in.  We were all surprised to see how busy House of Oliver was.  We all thought it was pretty good and my mom and grandma said they looked forward to returning soon.  It’s definitely a chill place to have a drink and a little bite, if not full on lunch or dinner (note that the kitchen hours are limited to 11-2 & 5-9, though the lounge is open 11AM-midnight every day).