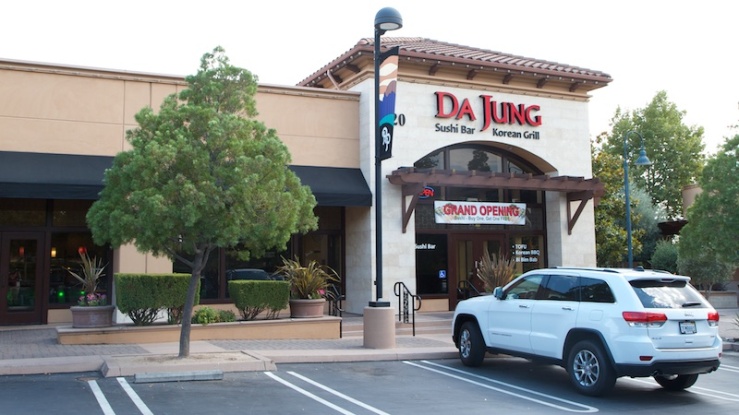 Yesterday for an early dinner I headed out to Da Jung, a Sushi Bar & Korean Grill that has moved into the old Tomi space at E. Roseville Pkwy and N. Sunrise.  They opened just over a month ago.  I was fairly excited to try Roseville’s 2nd Korean restaurant.

I arrived at about 4:50PM with a big appetite.  I had a feeling I would be ordering a lot of food.  As I mentioned in the Tomi write up (which you may want to check out for a few more angles of the interior), this is a very big space.  It has a large and open entryway with a tall ceiling and a massive chandelier which looks like it could crush an adult if it dropped.  Through a few large panes of stylized “shattered” glass you can see a part of the dining room.  As you turn left and enter the restaurant itself, you pretty much see everything as it opens up in front of you. 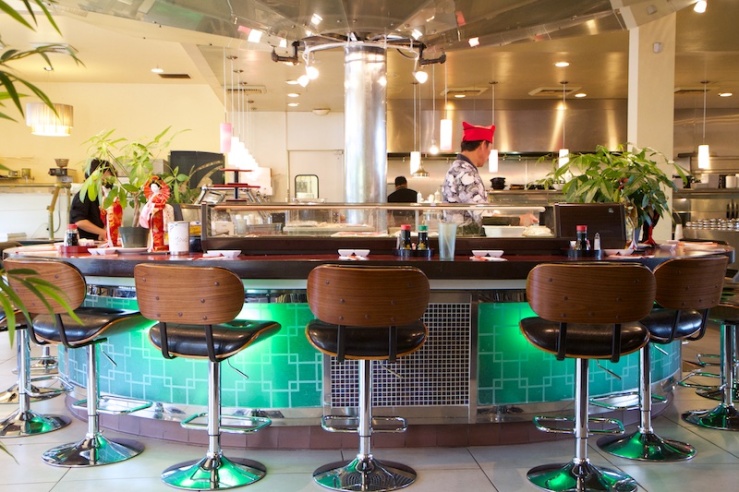 A big portion of the old buffet has been remodeled and turned into a sushi bar.  The far end of the buffet seemed to be cleverly repurposed to hold all the traditional Korean side dishes (or banchan).  The restaurant was pretty quiet, I think there may have been 2-3 tables occupied at the time.  As I stepped out of the entry way I was greeted, first by the sushi chef, then by my waitress who turned around at his greeting and then led me to a table next to the shattered glass window.  I had stopped in briefly when they opened to grab a menu and see what the place looked like.  At the time I didn’t really notice any changes at all, and I especially noticed the lack of the tables with grills built-in, or so I thought.  I must have actually noticed the lack of exhaust hoods, because they certainly do have grill-tables.  I guess they must be electric and the building has adequate ventilation.

I was seated at a normal table and I set about going over the menu.  I was determined to order a Korean BBQ dish and then a sushi roll or something on the side.  This is the one thing about Korean BBQ that keeps me from having it that often, it’s a bit pricey.  If you want to go full blown BBQ, as in at your table, it’s going to be $17-25 for one type of meat here.  They do have some combos, and the combos come in lunch or dinner sizes/prices, but even lunch is going to run you at least $14.  I figured that the combo would be the most affordable way for me to get some BBQ while leaving room to try some sushi as well, even though it would be a lot of food.  The combos come with Assorted Soon Tofu.  I had absolutely no idea what that was. 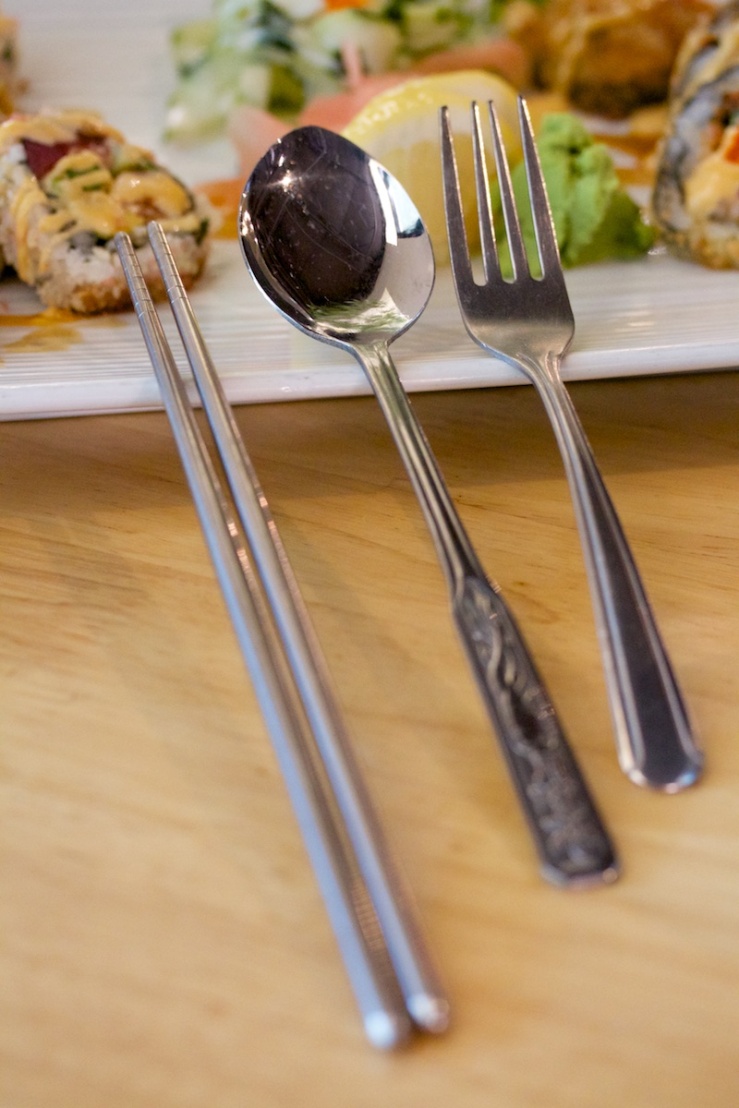 When my server came by to see if I was ready to order, I explained that I was interested in doing a combo, but that I wasn’t sure what the Soon Tofu was.  At first she sort of just started to point out the individual items on the menu that made up the combo I had pointed to, but then realized what I was actually asking and kind of summed it up as a tofu stew.  Sounded good enough to me so I went ahead and ordered the Spicy Pork Bulgogi Combo [$16.95].  Along with that I had picked out the Da Jung Special Roll (In: asparagus, tuna, jalapeño, salmon, with fish avocado. Out: crunch, yum yum sauce, eel sauce)[$12.95].  She informed me that all rolls were buy one get one free right now, and I’m not one to turn down a bonus roll.  I quickly skimmed down the rolls list once more and chose the What the Hell (Deep Fried – In: jalapeño, spicy tuna, cream cheese. Out: spicy eel sauce)[normally $11.95].  A fitting name for the roll based on how I decided on it.  This was turning out to be a ridiculously sized dinner.  To drink I had a Mr. Pibb [$1.75]

With my order out of the way I had a moment to look around and see what had changed.  Aside from the buffet’s new dual use setup and some grill-tables here and there, they had added some TVs, and that’s about it.  The place was pretty nice before so I don’t blame them at all for keeping it mostly the same.  I didn’t wait around looking a at the scenery for too long because my food came out in a very speedy 12 minutes.  It took her a few trips to deliver the soon tofu bowl, the spicy pork bulgogi, the large platter with both my rolls on it, and then 7 side dishes as well as a small bowl of rice.  The pork and tofu were both extremely hot with the tofu steaming like crazy.  I took a couple minutes to photograph everything while those cooled off a bit.

A wooden box of silverware was brought to my table and had everything I could need in it.  I grabbed a fork, spoon and chopsticks.  Similarly to UMI Sushi, these chopsticks were not disposable, but while UMI’s were wooden, these were metal.  I ended up not using them that much though because with so much in front of me, it was a little annoying to be switching utensils every other bite.  This was, I think, the very first time I’ve eaten sushi with a fork.  It was weird and strangely more difficult than I expected.  The Da Jung roll was enjoyable throughout.  Inside was a fairly good sized chunk of tuna and a slightly smaller piece of salmon.  In-between those was the asparagus, which was actually deep fried in tempura batter.  The asparagus, aside from the tempura, still had some snap to it and a crunch of it’s own.  I didn’t taste the spice of the jalapeño and I have no idea what “fish avocado” is, but it seemed like normal avocado to me.  The sauces were tasty and, other than the side dishes, this being the coldest thing on the table made it a go to to mix things up.

The What the Hell roll, being deep fried, had a nice crispy outside to it, though it seemed to be something other than the usual tempura batter.  It was a thinner, denser type of coating.  This was warm as well as being on the creamy side with the cream cheese.  There was a bit of spice from the spicy tuna, but once again I didn’t really taste the jalapeño.  Overall I thought it was good as well.

I picked at the sides a bit here and there, some more than others.  I made a point to try each one at least once.  Most of these looked like they could be described as pickled.  The zucchini was definitely so.  Even though I’m not a huge fan of pickled things, I was surprised by how much I didn’t hate many of the sides.  In fact, I actually kind of liked most of them.  Big exception to the kimchi though.  As much as I try to enjoy kimchi it never happens.  I’ve told myself over and over that if tens, if not hundreds, of millions of people in the world can love it then I should be able to at least like it a little bit.  Nope.  Can’t stand the stuff.  I try it every time and every time one bite is enough.  Anyway, most of these were pretty decent.  There was the zucchini, some sort of noodles, I think shredded radish, something that reminded me of quiche, and the last two I have no idea. 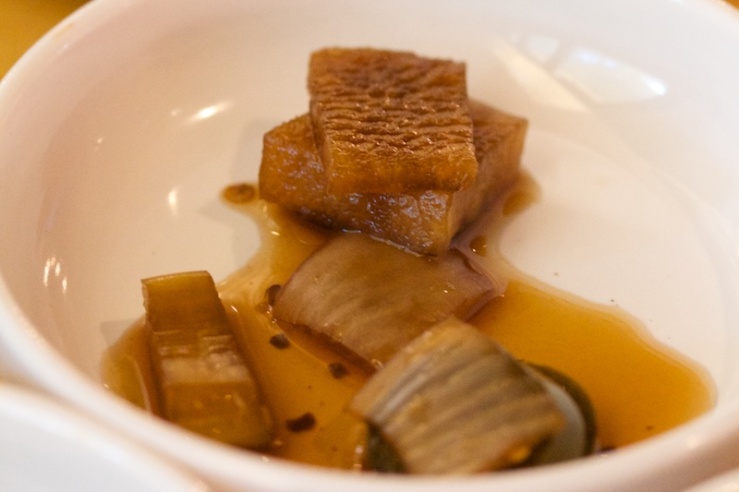 On to the soon tofu.  Now that it had cooled down (though it was still extremely hot), I scooped up a spoon full from beneath the nearly opaque reddish-orange surface.  The spoon came up with almost entirely tofu.  There were some bits of greens, onions and a couple other veggies in there but for the most part it was entirely tofu.  Looking back at the menu, it seems like it should have had more to it as Assorted Soon Tofu is described as having beef, shrimp and clams.  Oh well, I had no idea at the time so I ate away.  Apparently the rice goes with the soon tofu, which I also didn’t realize.  I mostly ate it with bites of the bulgogi.  The tofu was, well, tofu.  Bland, almost jello-like white cubes.  The broth was intensely flavorful though.  At first I did not like it at all.  It had a distinctly seaweed kind of flavor going on.  A few spoonfuls later I decided it was maybe more like green tea, then I got used to it.  It was quite savory and I could see this being a pretty nice warm thing to have in the winter.  I enjoyed it a little bit more with every bite. 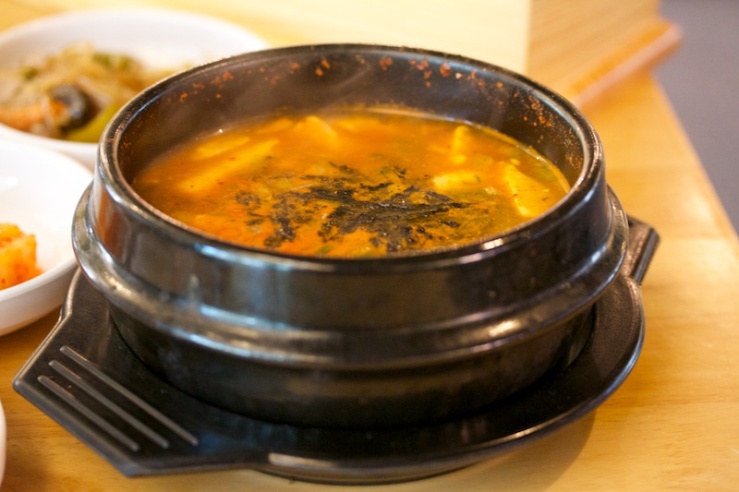 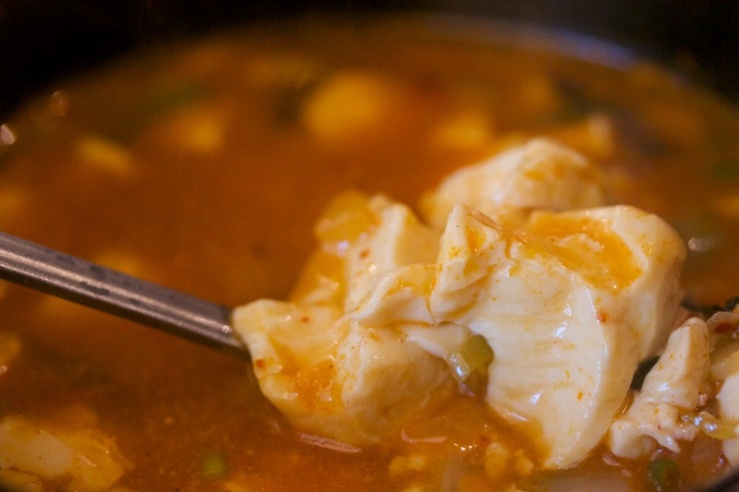 Finally, my most anticipated item, the spicy pork bulgogi.  Easily enough for two people, this was piled up on a hot oval dish sitting on a wooden block.  It was everything I wanted it to be.  Although it wasn’t really that spicy, it was intensely flavorful with the rich, savory marinade that had just a hint of sweetness.  The pork was all perfectly cooked, from the majority of lean bites to a scattered few fatty bits here and there.  Every piece was tender and insanely delicious.  I had the remaining half of this for lunch today and it was still amazing even heated up in the microwave.

I have to say I am extremely pleased that Tomi was replaced with this.  That was one of a very select few restaurants in Roseville that I actively hoped would close, and now we get another Korean place in return, which is something the whole Sacramento area needs more of, in my opinion.  The prices seem to be right in line with Iron Grill, the service was good, helpful and patient.  The place remains looking new and clean.  The only downside is the awful parking lot.  I think they built it with Mini Coopers and Smart Cars in mind.  I nearly got my front bumper taken off by someone when I attempted to leave.  Anyway, very happy with Da Jung.  Oh, one thing I’ve been meaning to mention.  Ever since I saw the name I can’t say it in my head without the intonation of saying da Bears.  I’ll leave you with that.  Da Jung.