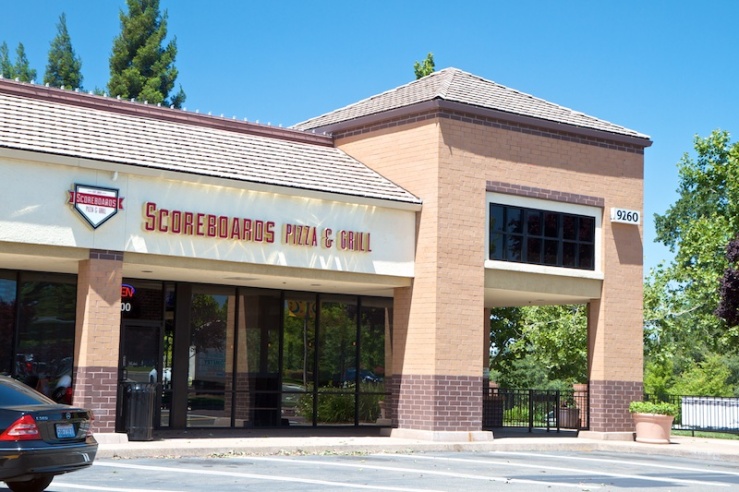 For post # 200 my family and I went to the brand new Scoreboards Pizza & Grill.  It’s located in what used to be a coffee house at the corner of Sierra College & East Roseville Parkway, the extreme South-East corner of Roseville.  This restaurant opened just last Wednesday.  We had planned on BBQing for mothers day dinner but scrapped the idea due to wind and instead went to try this out.  It’s an interesting spot for a restaurant.  There is only one other eatery (not counting Papa Murphy’s) in the little CVS shopping center, which is a Jalisco Grill.  As I mentioned, this used to be a coffee house, which means it’s not a particularly big space.  What it lacks in dining room, it makes up with patio space.  The outside is as big as the inside, if not bigger, and has a couple nice features in a large fountain and fireplace(s).  They are apparently waiting on some additional tables and chairs, but the few that are out there were occupied by the time we had left (and the wind had died down a bit).  The way the patio is oriented with the building and some large trees behind it leads to some nice shade in the evening.

We arrived at roughly 6:15 and were greeted and seated immediately.  The place was about half occupied at the time and luckily there was a few small tables together where they could sit our group of 6 + a baby.  There is a very small bar off to the left upon entering with lockers making up the back wall.  A couple of TVs are built into this decoration.  In the main dining room to the right, there is a combination of booth seating, small tables and tables with half booth seating (which is where we were sat).  Up above, fairly high up, are 4 TVs, each facing a different direction.

Our server came by as soon as we had settled and took our drink orders.  A couple of minutes later she returned with glasses of pinot grigio, waters, iced tea and soda.  They either didn’t have the in-house menus made up or they are going the budget route because we had a handful of folded-paper, black-and-white, take-out style menus to look over.  The selection is relatively basic.  Pizza, salad, burgers and a handful of appetizers.

We decided on a half Chicken Gourmet (spinach, garlic, onions, mushrooms, fresh tomatoes and chicken) and half Pesto (pesto sauce, spinach, fresh tomatoes and chicken).  My brother and his wife were each getting a green salad (fresh romaine lettuce, kidney and garbonzo beans, croutons, mozzarella and cherry tomatoes)[$4.75] and sharing a small cheese pizza.  That left four of us to share the half and half pizza.  I asked about the size, how many slices and how thick the crust was before agreeing that a medium [$24.50 – prices vary based on toppings] would be good enough.  The server said the crust was pretty thick and the menu says that the medium serves 3-5.  This 14″ pie ended up having 8 slices which was just about perfect for us.  I asked for the Chicken Gourmet side to be made with creamy garlic sauce, since it is strangely made with original red.  Within just a few minutes the salads were brought out.  The dressings that you can choose from are all freshly made in-house.

Our pizzas arrived 15 minutes after the salad, bringing the total wait time for the pizzas from when we ordered to a little under 20 min.  The crust was indeed pretty thick, but only around the outer edge.  Through the middle it was actually fairly thin.  A second hand was needed to hold a slice up.  My mom commented on how our half and half didn’t really look half and half.  I hadn’t actually looked that closely at the menu when we ordered, so I didn’t realize at the time that we were missing onions and mushrooms from the Chicken Gourmet.  I figured they were just very similar.  This was a bummer, because while that side was fairly tasty, there did seem to be something missing.  Both the tomatoes and chicken were plentiful across the entire pie.  The tomatoes were very ripe and the chicken pieces were large and generally tender.  One here or there was a bit dry.  The spinach was distributed a little more sparsely and you’d only get one or two leaves per slice, but each one was surprisingly strong in flavor.  I’m so used to fresh baby spinach in salads and on my pizzas for so long that I had forgotten how strong spinach can get.  It was good though.  The pesto sauce on that half was oily and filled with that wonderful pesto flavoring throughout each bite. 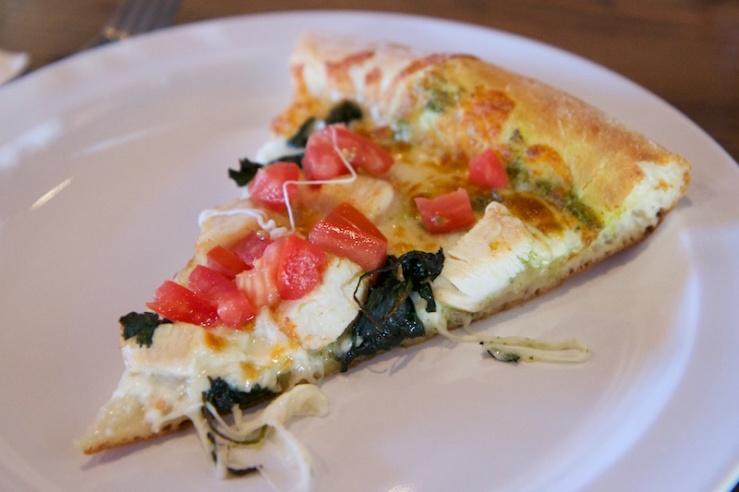 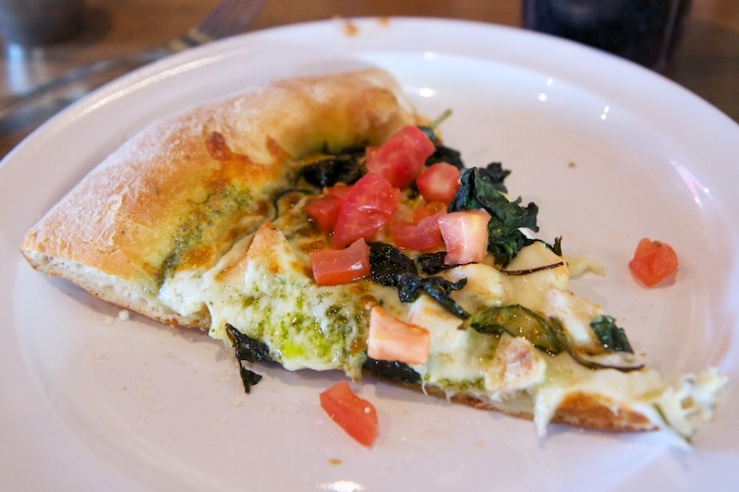 Overall we were pleased with Scoreboards.  Our server seemed attentive, bringing refills quickly, and offering up a different pino grigio to try after the first two glasses had finished off the last bottle of the one listed on the menu.  Once they get all their patio furniture and are set up, this will probably be a nice dinner spot for the local residents when the weather is nice.  The prices of the pizzas are high.  Our medium specialty was $24.50.  This is more expensive than Round Table, my baseline for generally expensive pizza, where you can get a large specialty for the same amount.  I knocked one point off my rating for the missing mushrooms and onions.