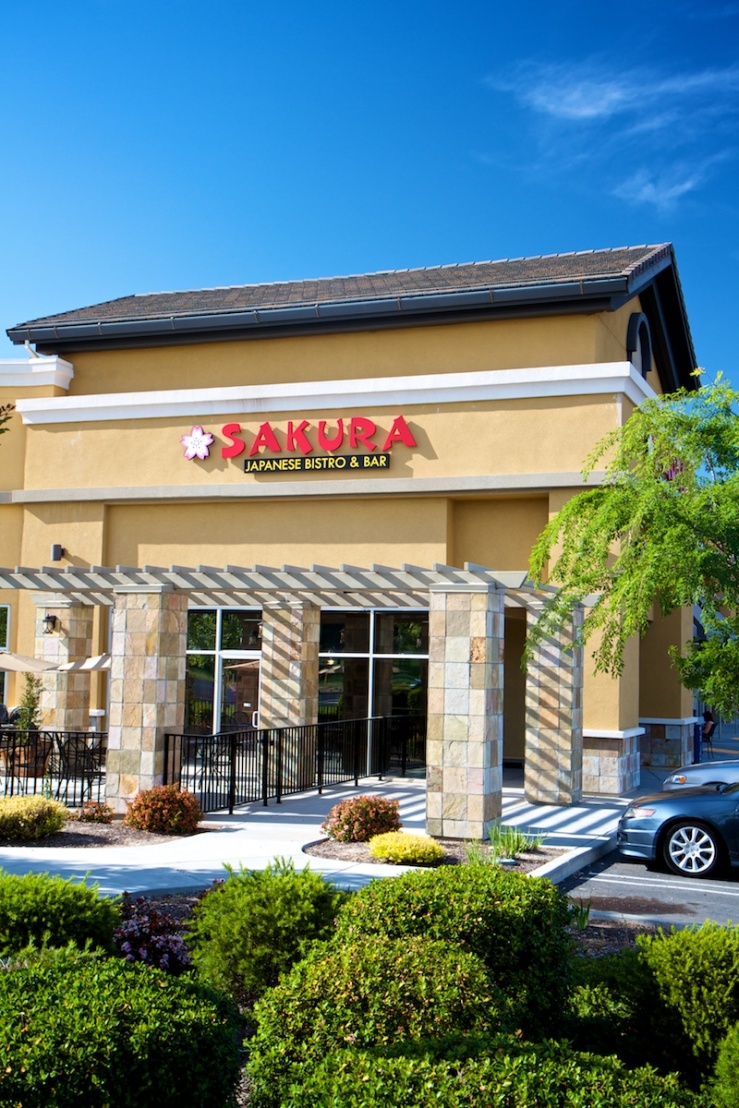 We are getting down to it.  There were only two places on my list to chose from.  I chose Sakura Japanese Bistro & Bar because Pinto Thai has only been open for a couple of weeks.  Sakura is a new Japanese restaurant located on Blue Oaks and Foothills.  They opened a little over 2 months ago.  I arrived just before they opened for dinner and had to wait a few minutes.  They have a split schedule for lunch and dinner and are closed for an hour or two in-between, opening back up at 5PM.  Needless to say, I was one of the first people in (a couple were already out on the patio).  I did, however, beat one of the employees by a few steps and held the door for them. 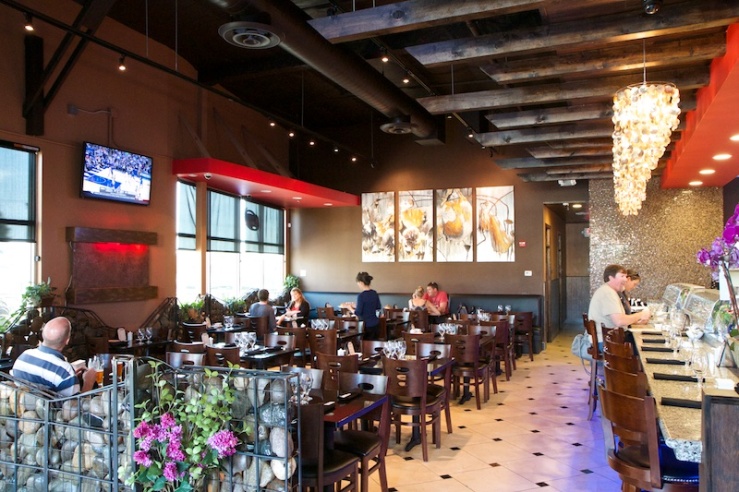 The inside is all nice and new, I believe they are the first tenant in this space.  It’s nicely decorated from front to back.  The bar runs most of the length of the room and I wondered up to the middle, asking “anywhere?” to the sushi chef since I didn’t see a host (turned out the person that I held the door was the hostess).  He welcomed me to sit wherever and I took a seat in front of him.  A moment later I was handed a menu by that hostess.  The sushi chef, Tang, asked what he could get started for me as he handed me a bowl of edamame.  I had to take a moment to go over everything, saying that I knew I was hungry but didn’t really have anything in mind yet.  I cruised through the two menus, looking over the beverages first.  I considered a beer but decided I’d just do a Mr. Pibb.  When the server came by I was told it was happy hour and that their draught beers were half off, so exactly the same price as a soda at $2, and I went ahead and got a Kirin. 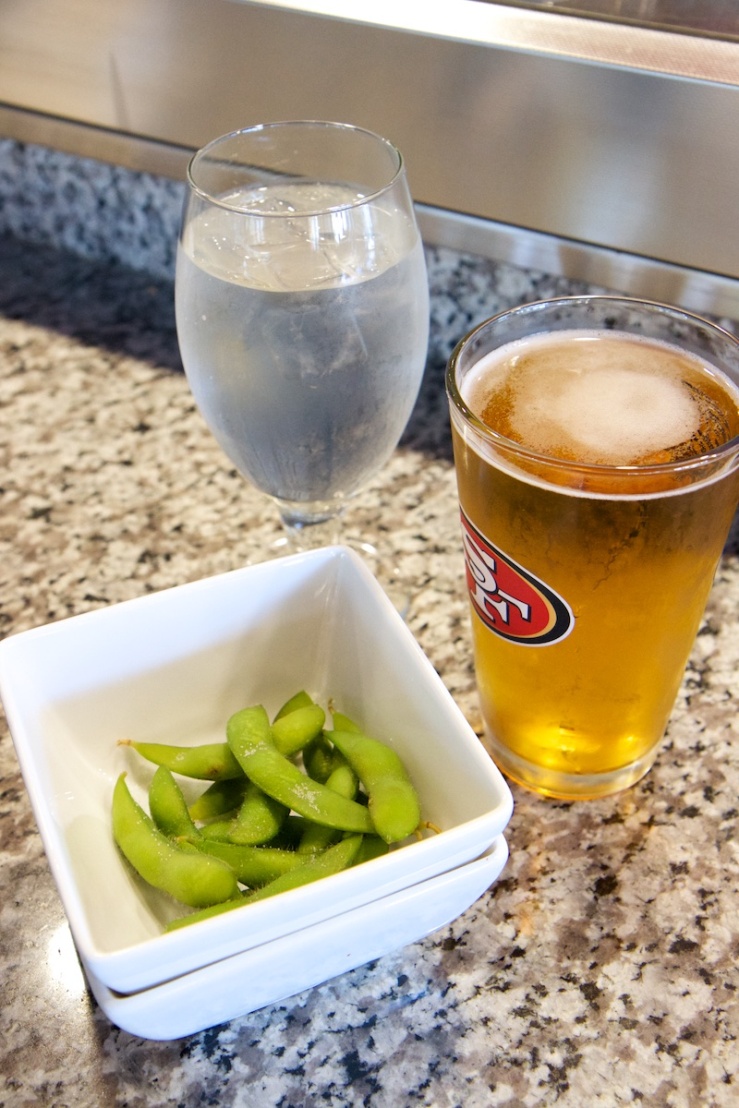 They have the usual selection of nigiri and sashimi.  I ordered the 5pc sake to get going while I continued to browse.  I figured I would just do a couple of rolls after that and looked over their house and special rolls lists.  Tang informed me that the house list was 50% off, which I’m not certain is due to happy hour or if it’s all the time.  Their list isn’t as extensive as some of the sushi places in Roseville but it had a good variety.  I settled on the Sakura (Torched [Spicy tuna / spicy garlic crab / Hakaido scallop] Ebi(cooked shrimp), avocado, salmon, Baked with spicy Sakura sauce)[$14] and the Cherry Blossom ([Salmon / avocado / cucumber] Tuna, tobiko, spicy mayo, light ponzu and unagi sauce)[$11 (half off so $5.50)].  While he prepared my orders, Tang told me that they used Scottish salmon and not farmed salmon.  I don’t know a thing about the different types so I have to take his word on that.  He continued to tell me that they are trying to do their own thing and lean towards more traditional sushi with less emphasis on sauces.  I can definitely appreciate that.  I mean, sometimes I’m in the mood for something smothered in flavored sauces (the Godzilla at Blue Nami for instance) but it can be overkill a lot of the time.

In just a few minutes he handed me my plate of sashimi, with a bonus piece.  Garnished with two small lemon slices and a flower, the salmon looked nice and fresh.  It was very tasty, succulent and slightly chilled.  One of the slices was a little small, which may be why he chose to add another piece. 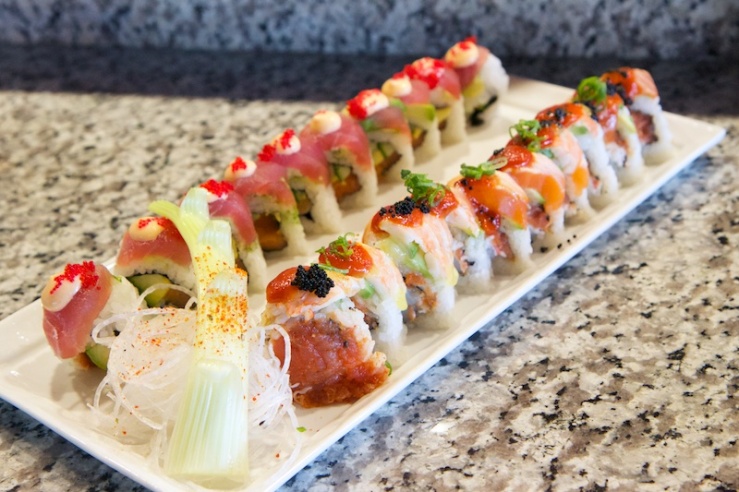 About ten minutes later my rolls were ready and passed over the bar to me.  The rolls were small but long and with many pieces.  I prefer this over the short, huge rolls you sometime get which are on the extreme end of bite-sized.  As he had mentioned, the sauce on these rolls was light in comparison to others, with just a little dab precisely added to each piece.  I started with the Cherry Blossom since it seemed it would be the milder of the two.  My first bite in I was a little underwhelmed, probably because I’m used to a ton of sauce.  After a couple more though, I began to like it a lot more.  The minimal sauce allowed each individual ingredient to stand on it’s own.  I realized that I was actually tasting each one and could enjoy their flavors.  For example, unless you get something that is LOADED with avocado, to be honest I don’t think I usually identify the flavor of it but instead simply notice the texture. Here I was able to enjoy the ripe avocado along with the salmon and the crisp cucumber.  The tuna was nice as well, and it was all finished off with the now background flavors of spicy mayo, ponzu and unagi sauce.  In the end I really appreciated the change up. 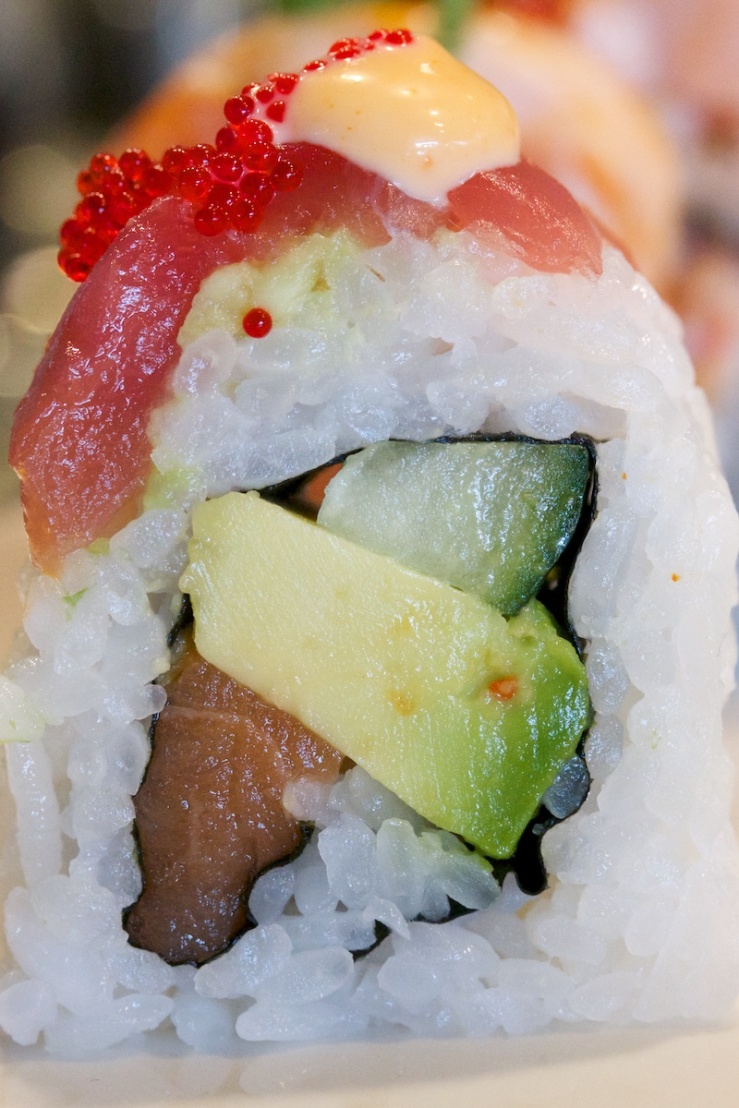 The Sakura roll was considerably more flavorful with all it’s spicy items.  The torching was light and didn’t overwhelm anything, just adding a little warmth and texture to salmon up top (which was sliced nice and thick).  The shrimp and scallop contributed to a denser interior, mixed with the softer and flavorful spicy crab.  I don’t typically use any soy sauce with rolls anymore but touched just a corner of several pieces to it which took it to another level.  Very enjoyable and lots of good flavors all around.

I thought I was done and nearly passed up on the offered dessert but changed my mind when I saw they had ginger creme brûlée (ginger flavored custard, finished with a layer of torched creme)[$5].  I’m not sure I’ve ever actually tried the ginger that is served up with sushi before and didn’t know what to expect from ginger flavored brûlée.  Indeed, it was a flavor that I am not familiar with and am ill-equipt to describe, but the shallow dish was pretty good.  It didn’t have that glass-like layer of torched sugar that I am used to with creme brûlée, but instead was a thin creamy top to the already mild and smooth custard.  It was different, but still very much in the spectrum of basic custard that I love.  $5 might be a little steep for the amount you get, but that is my only complaint here.

Overall I was pleased with Sakura.  The sashimi was top-notch and the rolls with light sauce were a nice change-up from the norm.  Tang and the other sushi chef (can’t recall his name) were both friendly.  I had little interaction with the host and server but they both seemed nice.  Residents on this side of town and employees at NEC/HP should be happy to have a good sushi place right next door.

Bonus photo of a shellfish sashimi plate Tang showed me before sending it off to it’s table:

Well, now that I’m down to just a single place on my list that’s open It’s going to start to get a little quiet around here.  I’m certainly not done though.  There are nearly 10 new places that are already in the works and I’ll be keeping my eye on them.  As they open I’ll give each one at least a couple of weeks to find their feet and then go check them out.  For now, feel free to browse the other places I’ve been.  I recently added some pages under Completed Restaurants which should help you find what you are looking for.  Once I exhaust the ones that are currently open I will probably put together a little summary of everywhere I’ve been so far with some notes on what I think about them in hindsight.  Feel free to subscribe by email over on the right to be notified when I post something new.  I don’t spam it, so you’ll only get a message when I make a post, that way you don’t need to check back to see whether or not anything new is up.