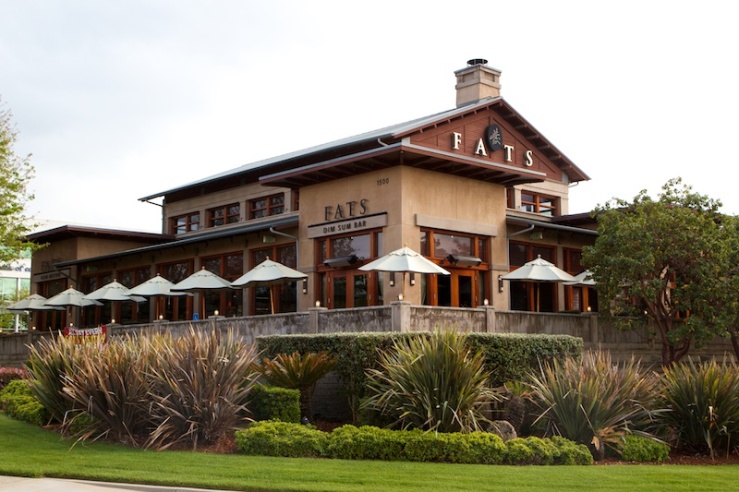 For dinner yesterday I was joined by several family members at Fat’s Asia Bistro & Dim Sum Bar, on the corner of Eureka and Rocky Ridge.  It’s been quite a long time since I’ve been here, well over 5 years and maybe as many as 10.  I remember Fat’s being one of the early nicer restaurants in Roseville as the growth was in full swing.  It is part of the Fat’s Family of Restaurants, a collection of four Chinese & American cuisine restaurants in the Sacramento area.  This Fat’s has a handful of various Asian dishes but the menu is primarily Chinese. 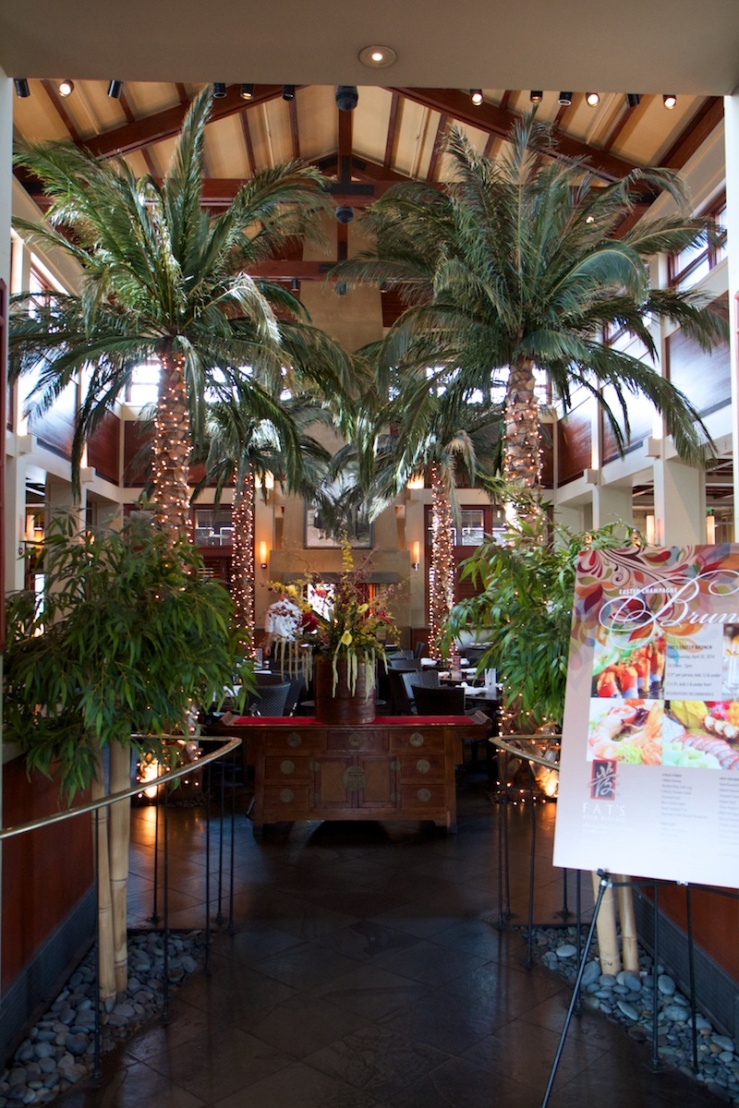 I arrived a little before everyone else to get my exterior photo and then headed in just before 5PM.  The parking lot was pretty full.  A lot of that was due to a business function going on in the back room, which we could hear throughout our dinner.  The dining room was fairly quiet, but the bar was busy with a happy hour crowd.  I took a seat near the end of the bar and was quickly greeted by a bartender.  He filled me in on the draught beers on the other end that I couldn’t see, then I chose a large Sapporo [$4 happy hour] which was set in front of me almost immediately.  The bar looked to have a nice selection, with a big wall of liquor on display.  The part directly in front of me was partially open, giving a view into kitchen. 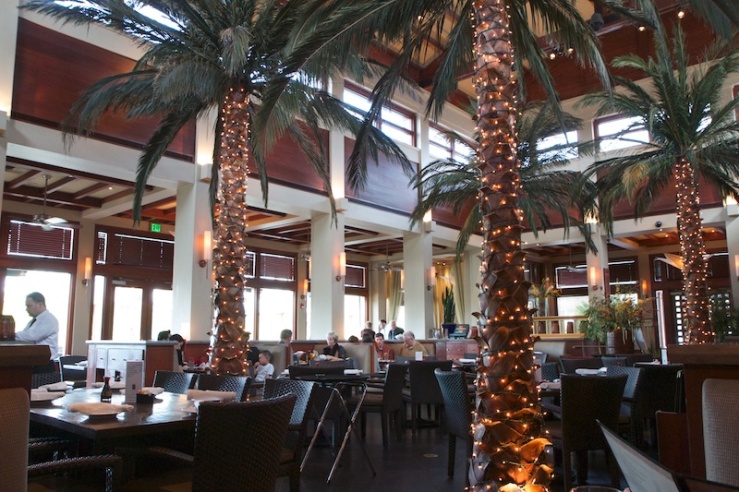 In just a few minutes my family had arrived and I met them at a large, circular table in one corner of the central dining area.  We had 5 total and fit comfortably in here.  The table was equipped with a lazy susan, which worked out great for family-style ordering.  Soon we met our server who got our drinks going.  I already had my Sapporo but the rest ordered a bottle of Double Decker Pino Grigio [$28] and a pot of hot green tea [$3.25].  We were in no rush, took our time reading the menu and ordered a couple of appetizers soon after the beverages arrived.  He returned with a bucket of ice for the wine and just a couple of minutes later the appetizers came out.  We had the Chicken in Lettuce Cup (minced chicken with water chestnuts, pine nuts, and hoisin sauce)[$11] and Pork Shu Mei (steamed pork-filled dumpling)[$9].

The Chicken in Lettuce Cup is pretty similar to the poplar appetizer at PF Chang’s and some otter places, but the hoisin sauce is served on the side, which left the chicken looking a little dull.  As I was taking a picture of it and thinking it looked a bit like Fancy Feast, my sister-in-law pretty much said the same thing out loud, which made me laugh.  This came with a TON of lettuce, way more than we needed.  It was a nice change from having to always ask for more lettuce at PFC.  The lettuce was cold and extremely crisp.  The chicken was good though the way it’s prepared elsewhere, where I think they cook the sauce into it, is much better.  It also looks more appetizing.  The hoisin sauce was viscous and sickly sweet.  As for the Pork Shu Mei, this was the first time I’ve ever ordered dumplings.  I’ve been curious about them for years but something often looked better anytime I came across them previously.  They were served in the little wooden container with a lid.  Lifting this off revealed 5 or 6 little open dumplings stuffed with pork.  It was not quite was I was expecting, having seen only the closed type on the web and on Anthony Bourdain’s shows.  The amount that I see them raved about had my expectations quite high and, while they tasted pretty good, they were not anywhere near as good as I had hoped.  These were tightly wrapped and solid.  Cutting one in half, the 2 pieces retained their shape and left me wondering if they are prepared far in advance and reheated when ordered.  If anyone knows where I can find some truly amazing dumplings without traveling back to Asia, do tell in the comments below or shoot me an email at eatingthroughroseville@gmail.com. 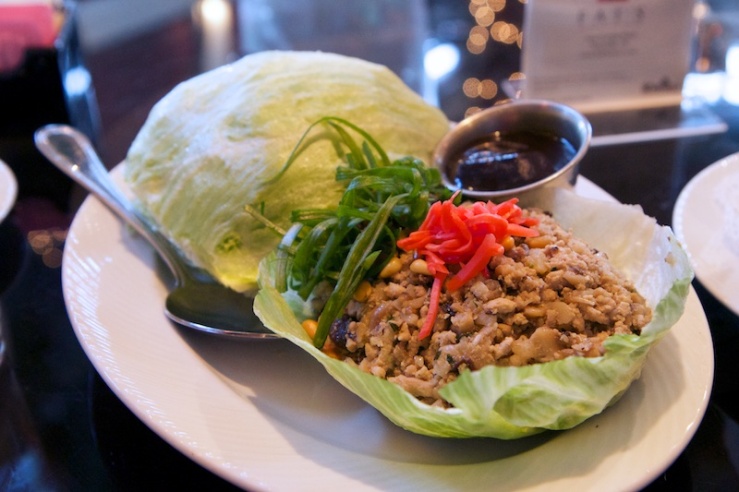 We were somewhere in the middle of our appetizers when we ordered our food.  Note that this doesn’t mean our server was slacking, he was on top of things.  The appetizers had come very quickly and he was very much present regularly.  We ordered:

This all came out swiftly, within 10-15.  A different server brought it all out on a big tray and set each plate down at our table, naming them as she did so.  One item was incorrect, we were given vegetable chow mien instead of the fried rice.  We told her right then and she apologized and took it back.  Our server came by a minute later and apologized himself while refilling a water.  The replacement rice was very prompt, arriving in just 4 minutes.  Everything was hot, many of them steaming.

The garlic green beans were coated in a slippery garlic sauce, though the garlic was not very strong.  In fact there wasn’t a ton of flavor aside from the beans themselves.  They were a bit firm, while still easily chewable, and they squeaked with each bite.  They were probably my least favorite item on the table.  Some of the others agreed, but my grandma seemed to like them just fine.

The Mongolian beef was nice and tender.  It was drowning in a sweet and savory sauce and mixed in with lots of green onions and a fair amount of slice jalapeños.  Aside from the jalapeños, this wasn’t actually very spicy at all.  Even the peppers themselves didn’t have much of a kick to them.  I definitely prefer the crispier, spicier, less sweet and less saucy variety of this dish. 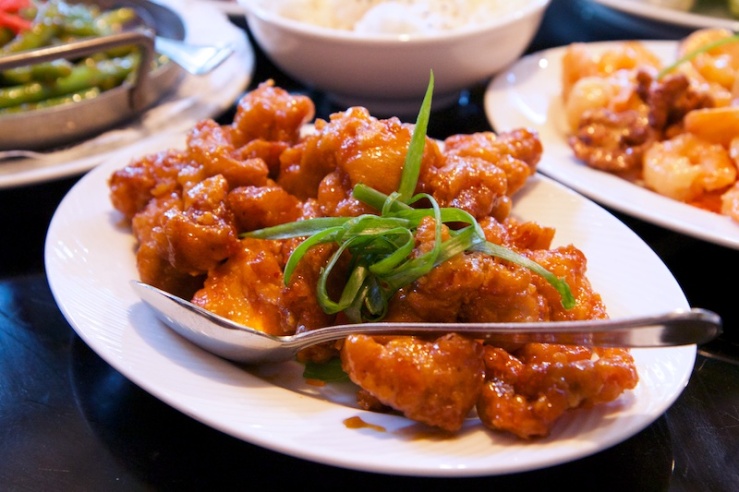 The orange chicken was the best thing we got.  I do recall it being very good years ago.  The pieces were good sized, crisp in their thin batter and full of delicious flavor with a zing of orange to them.  The chicken inside was moist and tasty.  The only thing that came close to this was the veggie fried rice which was excellent, both then and today as leftovers. 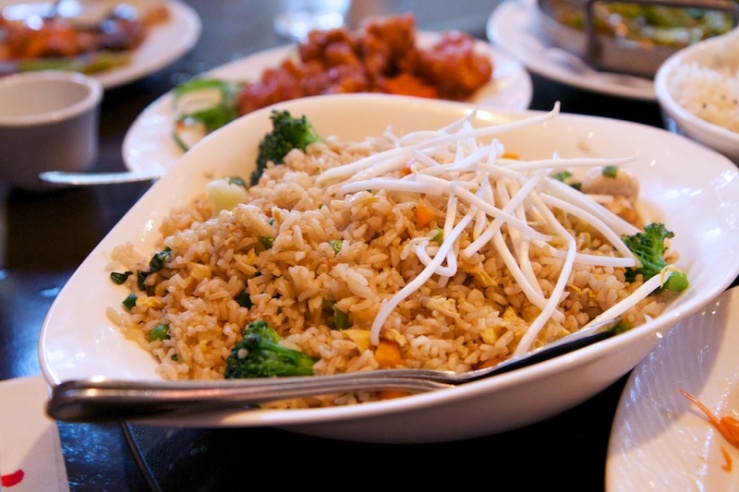 The last item, honey walnut prawns, are often my favorite item at Chinese restaurants.  On top of that, having had ridiculously amazing versions of them at Bambu Asian Cuisine and Leo’s Kitchen, I now have an entirely new level of expectation for this dish.  Unfortunately, Fat’s prawns fell much, much short of that level.  I would deem them as acceptable.  There were few walnuts and the prawns themselves were light on flavor. 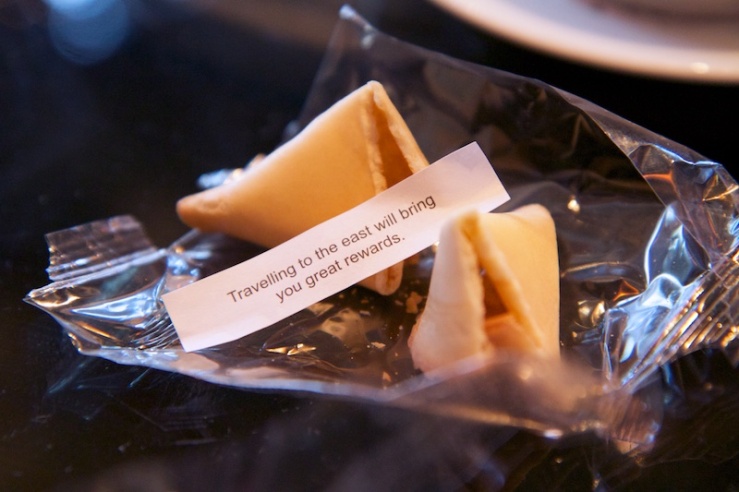 Overall I found myself surprisingly underwhelmed with the food here at Fat’s.  I remember so long ago really enjoying this restaurant.  There are two possible reasons for this disappointment.  Back then I wasn’t nearly as into food and trying lots of different things as I am now, so I had little to compare Fat’s to at the time.  Maybe I just expect more out of restaurants these days, and/or the food has declined in quality over the years.  My mom mentioned that she too hadn’t been here in a long time after discovering one visit that they no longer had her favorite dish, orange beef.  I felt that the prices were quite high, which I guess i always kind of knew but had forgotten about.  You’re definitely paying for the nicer atmosphere, service and fancy leftover/takeout bags than you’ll get at any other Chinese restaurant around here.  The service was good, our server in particular did a great job, was very attentive, personable and had an excellent sense of humor.  Ultimately I will be sticking to the little mom & pop restaurants for my Chinese fix, we certainly have some good ones to chose from.