I’ve been planing this lunch for a while.  Mostly because the hours for this one are very odd and usually don’t line up with my availability.  See the chart from UrbanSpoon below to get an idea.  It doesn’t even tell the whole story.  Reading their Hours of Operation page takes some time and there are many notes and asterisks that take a little extra attention to fully process.  The place is A Dash of Panache.  They are located on Vernon Street next door to The Place and across the street from the now defunct Sammy’s Rockin’ Island Bar & Grill.  This business is several things in one.  It is a Tea Parlor, a Cafe, An Ice Cream Parlor and a Party Place.  They seem to specialize in providing a fun place for girls to have tea/birthday parties.  I wasn’t sure if this place should be on my list for quite a while, and despite an invitation from the owner, Scott Alvard, a couple years ago to come check it out and make an appointment for High Tea, I remained feeling weird about it.  Maybe it’s just the whole idea of me, a 30 year old guy with a big beard and big camera going into a place like this, kinda gave me the willies.  Fast forward to today, after reading their website several times over the years, discovering they have a separate cafe up front, I decided I had better just go have a sandwich and cross it off the list once and for all.

I headed over at about 11:30AM and walked in to a moderately busy cafe.  I could see down the hall that, what I assume is the tea parlor side, looked to have some people in it as well.  Aside from that, it did seem to be just a normal cafe with a focus on tea (lots of tea pots in the front end of the kitchen, a wall with jars of loose-leaf tea, tea-related merchandise, etc.).  The 10 or so tables were all the small, circular, cafe type.  A couple of kids were paying Battleship.  I wondered if the game belonged to Panache for customers use.  If true, I suppose that’s a great idea for boys while their sisters are in doing tea. 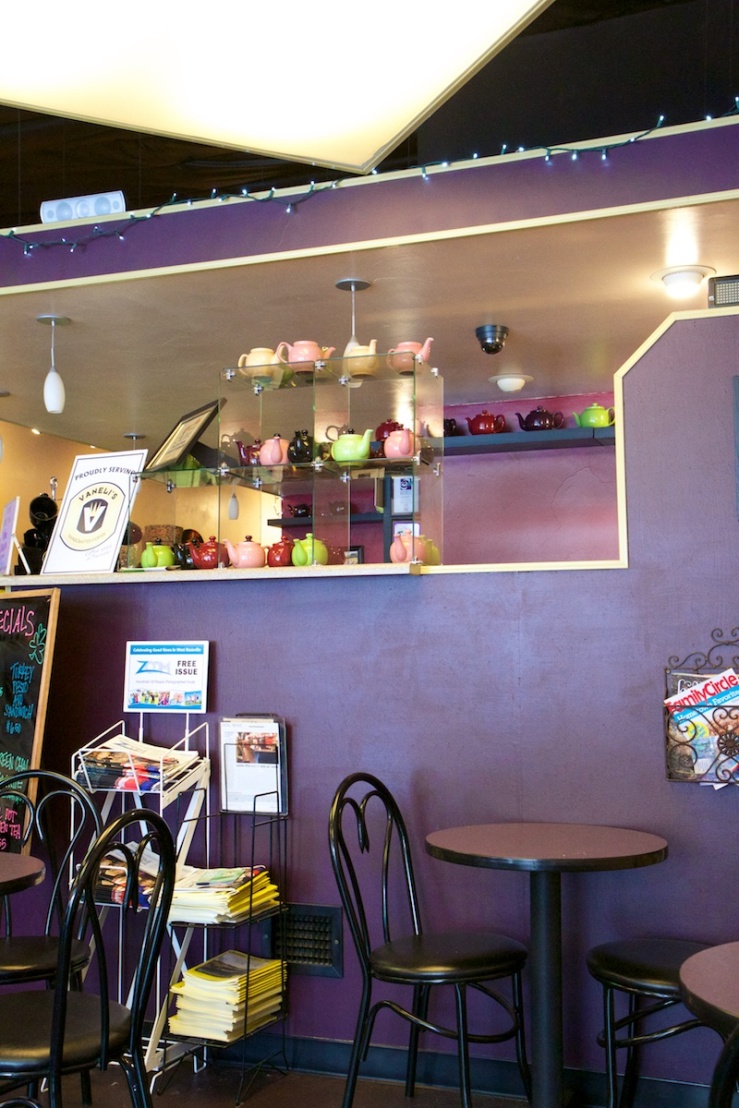 I had briefly scanned over a board with some daily specials on it outside but didn’t see anything that jumped out at me.  I slowly approached the counter while looking around for a menu on the walls, not finding one.  I was asked by one of the employeeshow they could help me, and just then I saw a stack of menus on the counter.  I said I would be getting a sandwich but needed a couple of minutes.  She continued to work, putting some tea pots and cups together for other customers while staying nearby for when I was ready.  I went over the sandwiches and saw you can do a half sandwich with salad.  That specifically excluded one called the Tuscan, which of course drew my attention to it.  The Tuscan Grilled Chicken Sandwich (A juicy, grilled chicken breast on freshly-baked focaccia with mild pesto sauce, Provolone cheese, tomato. Includes a small side of mixed greens & fruit garnish) [$6.85].  That sounded pretty good to me.  Just before ordering I saw you can add a Triple Chocolate Brownie and a large soft drink for $1.55.  I was brought around the counter a little ways into the hallway, where the register was located, to be rung up.  Here is where I saw the wall of loose-leaf teas and also the cooler with Gunther’s ice cream.  Despite having heard for years and years about Gunther’s ice cream I’ve never actually had any.  I might just stop back over here later today to try out a scoop.

My sandwich, soda and brownie came out to just under $10.  I paid and took a seat in the front.  It took about 6-8 minutes for my food to be brought out.  an employee set the plate in front of me and said she’d be back with napkins and a fork.  When she returned she asked if I wanted a glass of water, probably since I didn’t have anything else there, and I let her know I should also have a brownie and soda coming.  In less than a minute she came back with both.  My sandwich was a little bigger than I was expecting for a little cafe like this.  Clearly visible was a seriously thick piece of chicken breast and a nice slice of juicy tomato.  The pesto spread was on both sides of the bun, liberally applied in spots, and a thick, melted slice of provolone sat beneath the chicken.  Next to the sandwich was the mixed greens, which was heavily comprised of spinach.  A heavy drizzle of blue cheese dressing topped that off and a slice of orange completed the plate. 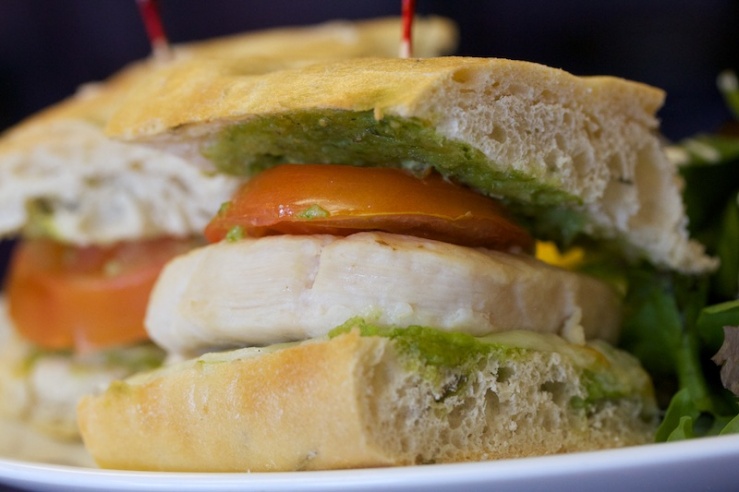 I enjoyed the salad.  While it maybe could have been a touch colder, it was very fresh.  The sandwich was incredible.  The chicken was probably one of the most delicious, moist and tender chicken breasts I’ve had in recent memory.  I looked forward to each next bite even as I was finishing the last one.  The pesto spread was flavorful and very tasty and the tomato, which looked like it was a bit underripe, was actually very good.  The provolone was mild but noticeable.  I loved this.  The brownie looked and tasted a lot like the boxed kind my brother used to make all the time when we both lived back at home.   I’m not sure if they make these from scotch and it’s a coincidence or not.  Not to say that it was bad, I love those brownies.  It was served warm too, which is very nice. 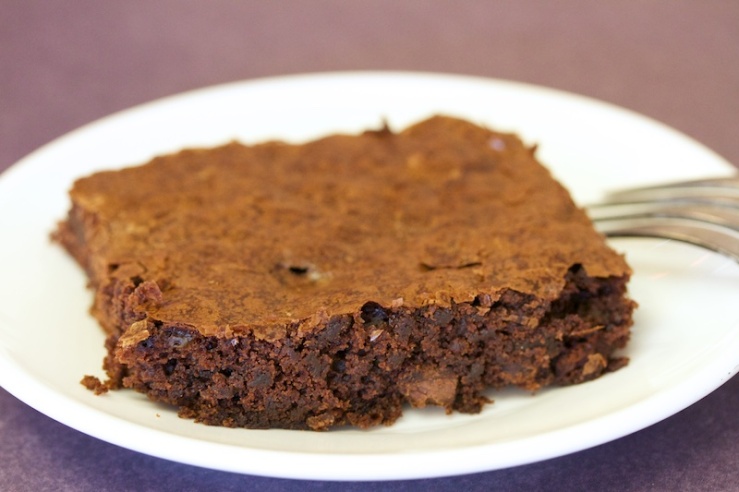 I can’t comment on the rest of Panache, but the cafe side of things is great.  Everyone was friendly, it was a quiet, nice little cafe to enjoy a Sunday lunch.  The prices seem good for the quality of food you get.  I’m now a fan.