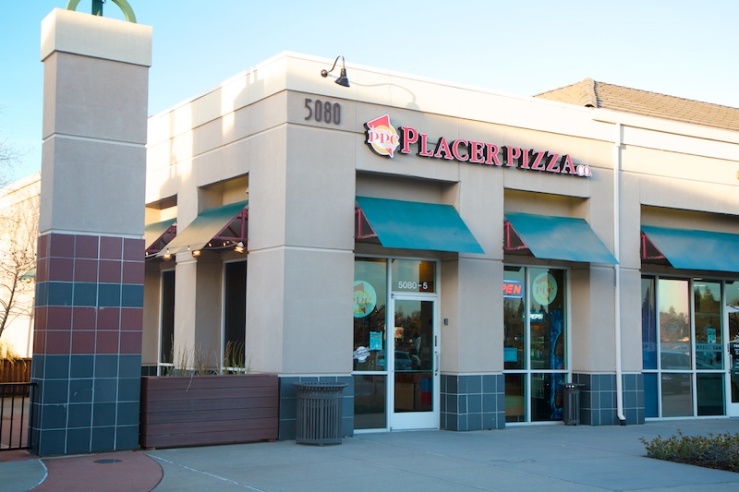 Tonight I headed out to the Foothills & Junction area where, tucked back in the corner of the Savemart shopping center, you’ll find Placer Pizza Company.  I was just thinking recently how surprised I was at the number of pizza places Roseville has (13 non-chain places, 15 if you count a couple that I went to early on and have since closed).  I’ve had a lot of pizza for this blog, and I still have one more place to go to after this one (actually make that two more with a new one opening in Spring).  There was even a Papa Murphy’s staring back at me through the window, across the parking lot, as I sat and ate pizza tonight.  Crazy, people must really love pizza more than I had thought for so many to survive together.  But I digress…

This pizza place  opened about 8 months ago.  I vaguely remember seeing it under construction a long time ago, and I obviously forgot about it completely.  A reader reminded me of it just recently.  I headed in at about 5:15PM, well before the dinner crowd.  It was quiet inside and I was the sole customer.  I had barely gotten my bearings and was just starting to glance at the menu when I was greeted by one of the owners (I am assuming she and her husband are the owners).  I said I’d need a couple minutes to look over everything.  She waited patiently while I skimmed over the menus, at some point asking if this was my first time in and then offering to answer any questions.  They have a menu up high on the wall and also down at a weird, almost waist level.  I went back and forth more than a couple times before settling on leaning in to get a good look at the lower one.  It didn’t take me long to find one of their creamy garlic sauce pizzas, the Placer Garlic Supreme (pepperoni, sausage, tomatoes, mushrooms, green onions and fresh garlic with creamy garlic sauce).  I figured I would do a medium with half that and half something else so I kept looking.  The Chicken Combo Delight piqued my interest (grilled chicken breast, bacon, tomatoes, red onions and green onions with sweet chili sauce).  I had to stop and consider the sweet chili sauce for a moment.  I love most white sauces, red tomato sauces are hit or miss for me, pesto I can take or leave.  This is one I rarely encounter, and I was wondering if it was anything like Round Table’s Polynesian sauce, which not even all RTP’s even have.  I decided to chance it.

I asked what kind of crust they had since I didn’t see anything about it on the menu.  She said they have a skinny crust, which is very thin, and then their thicker normal crust.  In addition, they have a gluten-free crust option for a couple bucks more on medium and large sized pizzas.  Once I got my pizza order in, I turned to look at their beers.  They have 5 or 6 on tap with the majority coming from local breweries.  Auburn Alehouse and Loomis Basin were represented, along with a third that I can’t recall.  Bud (or was it Coors?) Light completes the list and is the only big name beer they have.  I ordered a Loomis Basin Wheat.  Paid up, I took a little table number thing to a booth, came back up to grab my beer after she poured it, then took a seat.  The seating is mostly booths all along the wall.  There is also a nice looking counter with lots of stools that give you a good view of the pizza make-tables and ovens.  When the weather is nice, they have a very nice sized patio where you could sit and the owner told me that, starting back up in the Spring, they will have live bands out there on Friday nights.

I don’t think I’ve ever had any beer from Loomis Basin before.  I’ve only ever seen it at the Lincoln Beach Hut, which exclusively carries local beer.  This wheat was very light and crisp, perfectly refreshing to pair with pizza.  I did not get a lemon slice but it really didn’t need it.  A few minutes after sitting down the owner came by to ask if I’d like to try out some new bread that they are testing for their garlic bread and sandwiches.  Soon I had a basket of cheesy garlic bread in front of me.  The bread was a ciabatta bun and there was plenty of garlic goodness on it topped with a whole lot of cheese.  The bread itself was good, nice and light, which I think is important for an appetizer, and also works well with a sandwich.  I hope they keep those.

Total time for my pizza to be made and brought out was about 15 minutes.  The woman that delivered it to my table left and quickly returned with parmesan and red peppers.  I was off!  The crust on this pizza was nice and thin, probably amongst the thinner ones I’ve had so far in Roseville.  The bottom was nice and crisp and nearly held it’s own against the weight of the toppings, though I had to give it a little support.    It looked to be a well made pie and had good amounts of toppings that were very nicely distributed, with no heavy or bare areas.  I started with the Placer Garlic Supreme.  This side was intense.  I couldn’t tell if it was the pepperoni, sausage or both.  Either way, hugely flavorful.  To be honest I didn’t even really notice the onions, mushrooms or tomatoes that much because of that.  One thing I did notice, however, was that this was a pretty greasy pizza.  The few napkins I used were just about clear by the time I was done with them.  The Chicken Combo Delight was up next.  This side had lots of big, tender and juicy chunks of chicken on it.  Lots.  This one was considerably more mellow in flavor overall.  Each ingredient was able to shine a little bit on it’s own, which was nice.  The star was the sweet chili sauce.  It’s pretty much the same as the Polynesian sauce from RTP I mentioned earlier, and the name here is a perfect description of it.  It was sweet and had just a bit of chili heat and flavor to it.  I didn’t realize how much I missed that sauce until this.  It’s delicious and I highly recommend it if you’ve never had it. 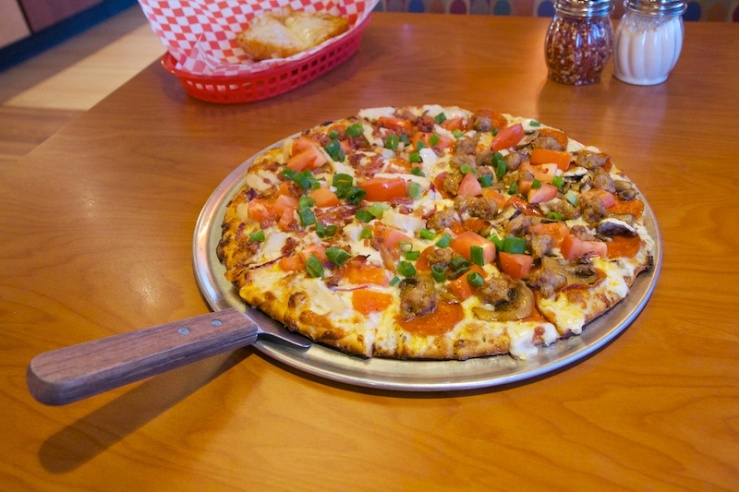 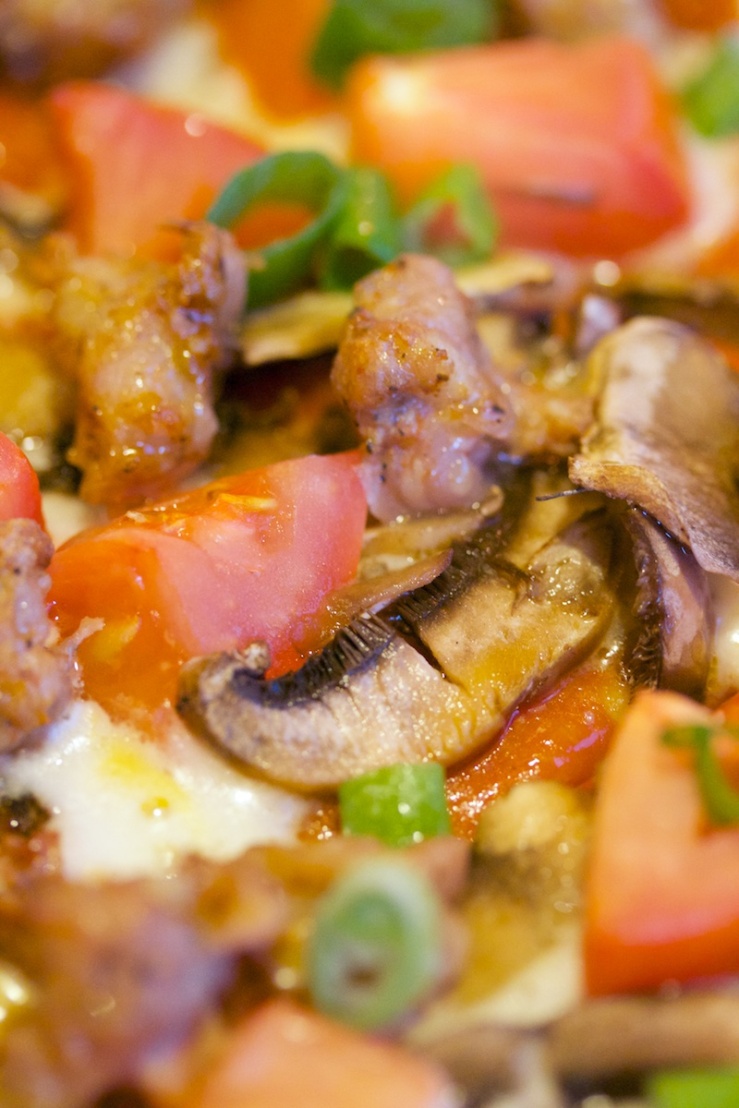 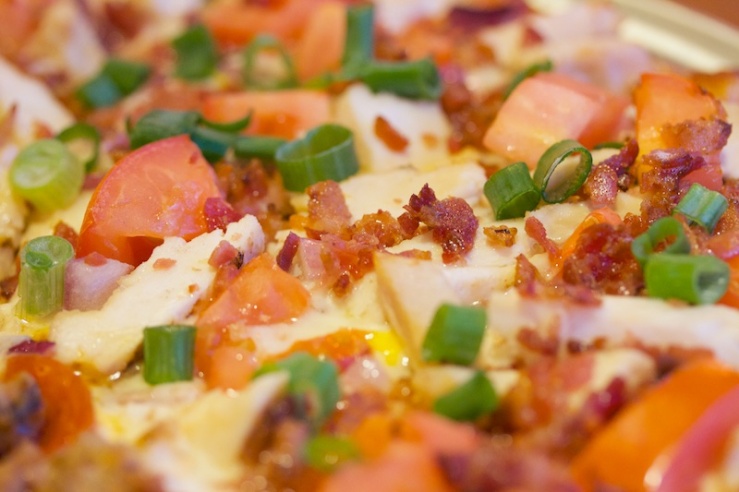 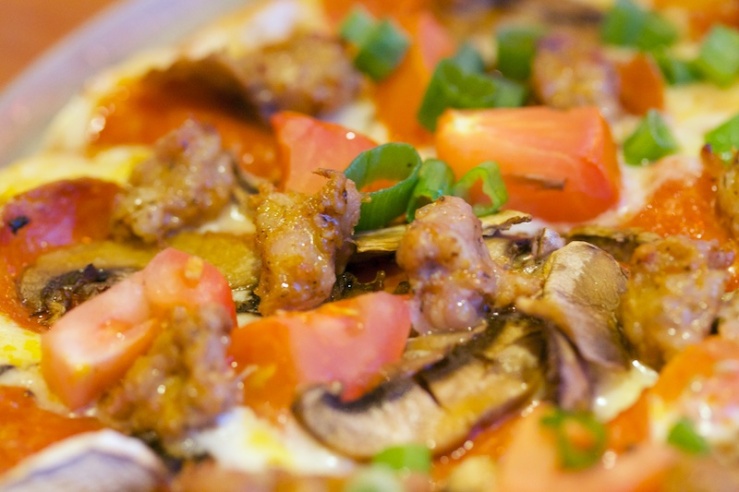 I think more surprising than how many pizza places we have is how good most of them actually are.  This one is definitely up there.  It was fantastic and the service was very good.  I feel like I might already be spoiled by Trademark Pizza Co’s pricing, since the price felt pretty high here [$16.99 for my medium specialty], but it’s pretty much on par with most pizza places, perhaps a little higher than most.  It’s a solid pizza and had what felt like fresh, quality and flavorful toppings on it, so it’s justified in a way.  I think it would be a great place to come and hang out on the patio, enjoy a pizza and listen to a live band now and then.