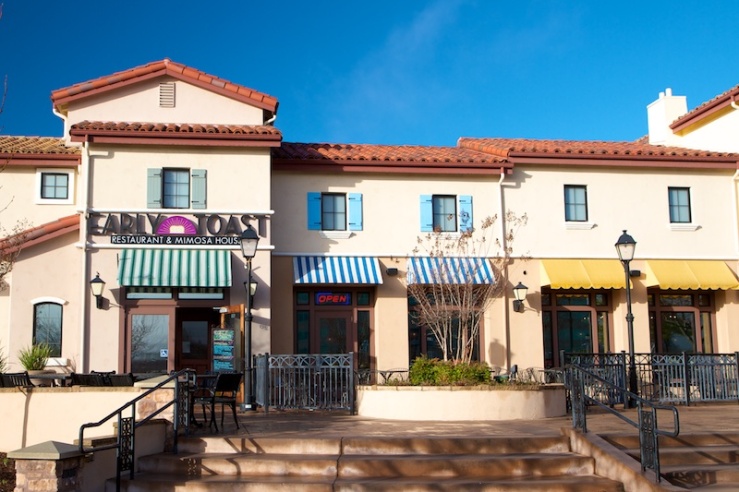 This morning I met up with my family for breakfast at Early Toast Mimosa House.  This new breakfast/lunch joint is the 4th one and 2nd in Roseville (our other one is on Pleasant Grove in the Nugget shopping center and the last two are in Folsom and El Dorado Hills).  Due to a miscommunication, my brother ended up at the other one and just decided to eat there.  I arrived first in the Stone Point shopping center (where you’ll also find Blue Nami, New Thai Kitchen, Trademark Pizza, Paul Martin’s, Pita Pit, Costa Vida and Cupcake A La Mode) just before 8:30am.  It was weird how quiet and empty the parking lot was since this center seems to almost always be packed. 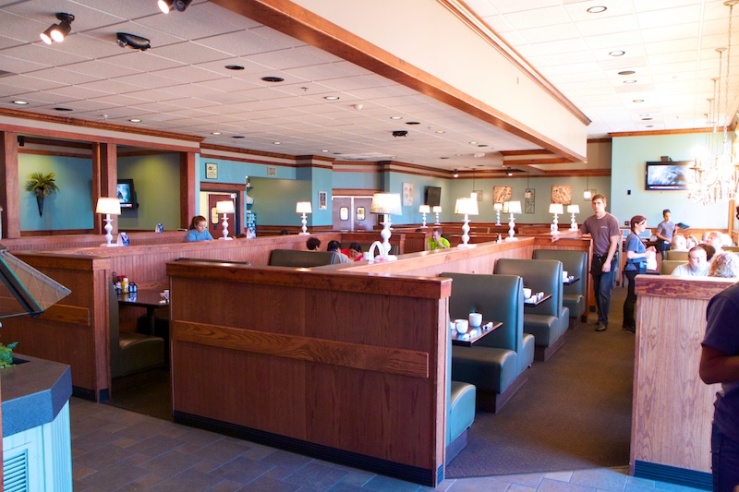 I headed in and took a look around.  At first it seemed like i was the only customer.  I was greeted after a few seconds when the employee up front finished up on the phone and offered to get me seated, even though I said I was waiting on more.  I wasn’t sure who was coming so she took me to one of their larger booths towards the back that could probably sit 6-8.  That was when I noticed that there was one table of people already there and eating, because I was sat at the table right next to them.  Aside from a bar area near the front entrance, the dining room looks to be entirely made up of booths.

Soon the others had joined me and we settled in looking over the menu.  Our drink orders were taken by the same person that sat me, mostly coffee and water with one hot tea.  They offer a selection of loose leaf teas.  My dad didn’t have a preference and went with the Boston 1779 that was first mentioned (a fine English breakfast tea that is full bodied, malty & robust in the cup) [$2.50 w/ free refills].  This was all brought out and our server introduced herself and went over several suggestions, then left us while we decided.  The menu is pretty large, both for breakfast and lunch.  Lots of omelets, pancakes, waffles and crepes dominate the breakfast side with many favorites like steak & eggs and eggs benedict.  For some reason this morning, despite a lot of the menu sounding really good, I was drawn to the Chicken-Fried Steak (cubed steak topped with country style gravy, three eggs any style, biscuit or choice of toast.  Served with house potatoes or hash browns) [$13.95].  I’ve never had it myself, but I’ve tasted it once or twice when friends ordered it and it’s always seemed good (especially at Four Sisters).

Our food took about 15 minutes to prepare, during which time business was starting to pick up a little bit.  By the time we left at 9:20 they might have been a quarter filled, but more spread out.  In two trips within a couple minutes we all had our plates in front of us.  The portions were pretty big.  The smallest one was my grandma’s Early Toast Basic Combination with bacon, two eggs, hash browns and toast [$8.95]. I don’t recall how she ordered it but she usually likes her bacon crispy and it certainly looked crispy.  My mom’s French Toast (three thick slices of Texas Toast dipped in a vanilla, cream and cinnamon egg batter.  Rolled in a cinnamon sugar coating and topped with powdered sugar) [$8.75] was huge and came with some sort of peach jam.  My dad had the Early Toast Perfecto Omelet (bacon, baby spinach, mushrooms, onions, jack cheese and cream cheese) [$10.25]. 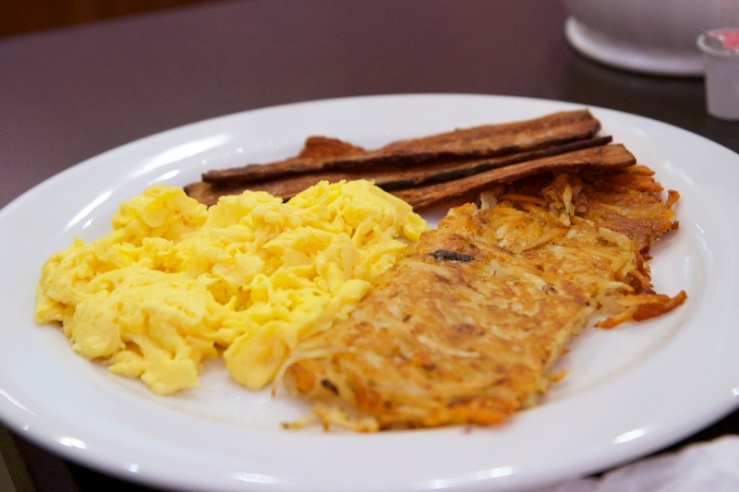 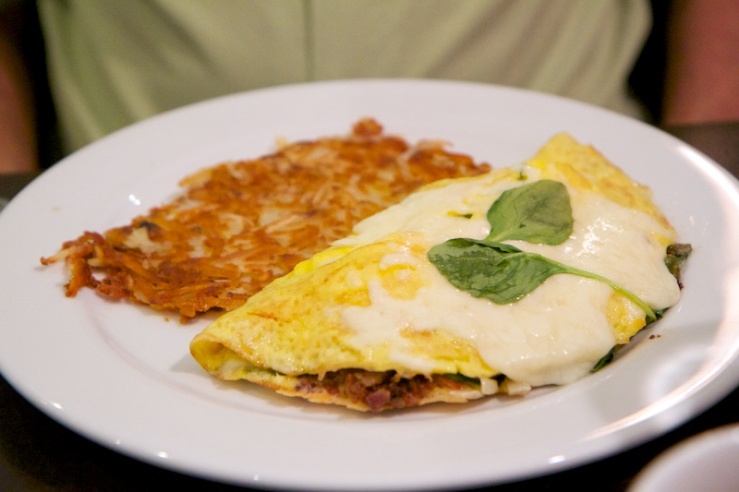 My eggs were done right as over medium, solid but with runny yolks inside.  The hash browns were exactly as I like them, super crispy (and I didn’t even ask for them like that).  It was actually two very thin layers, so there was even more crispiness to be enjoyed below.  The chicken fried steak was big.  It took up the entire plate it was on and with the gravy was probably over an inch thick.  The gravy was incredibly thick, almost like very soft mashed potatoes, and held it’s form on it’s own when I started cutting up the steak.  The steak was very hot, especially towards the center.  It was very easy to cut through and was nice and tender throughout.  The fried coating was excellent and crunchy.  Everything about this was awesome.  The gravy was intensely rich, the batter and the steak were both full of flavor.  I had a ton of food and ended up not even touching the wheat toast that came with it. 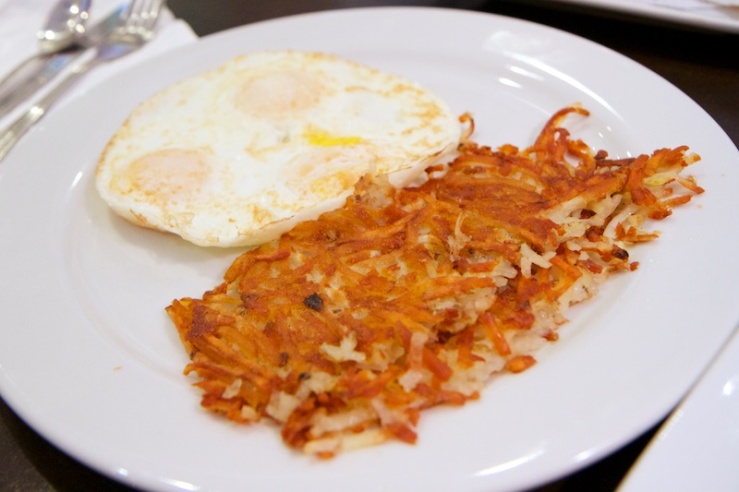 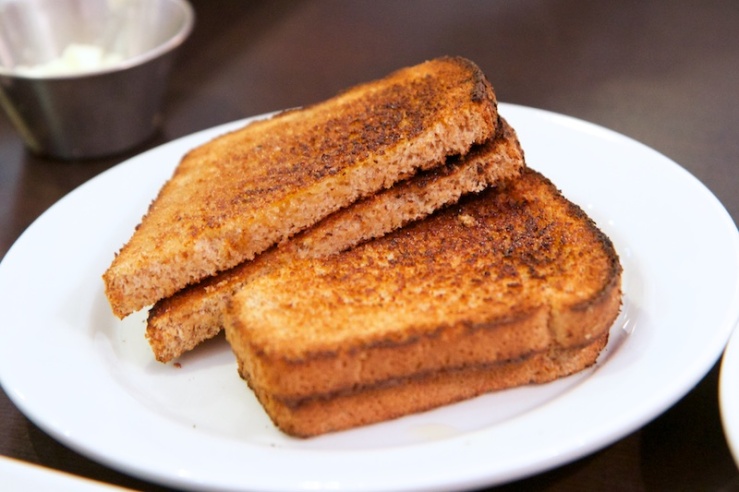 Most of us had some leftovers which were consolidated into one plate to take and easily made another meal or two.  Overall everyone seemed very pleased with the food.  The service was off and on, literally, in a way.  When our server was helping us, towards the beginning, she was excellent.  Very friendly and talkative.  After our food arrived however, we didn’t see her until the very end when she took the card for our bill.  We probably could have used a refill on the pot of coffee that was at our table at some point, and no one stopped by to check on everything and see how we were doing.  I’m going to give Early Toast a 4 of 5.  With more consistent service I think this could be in the running for top breakfast in Roseville.