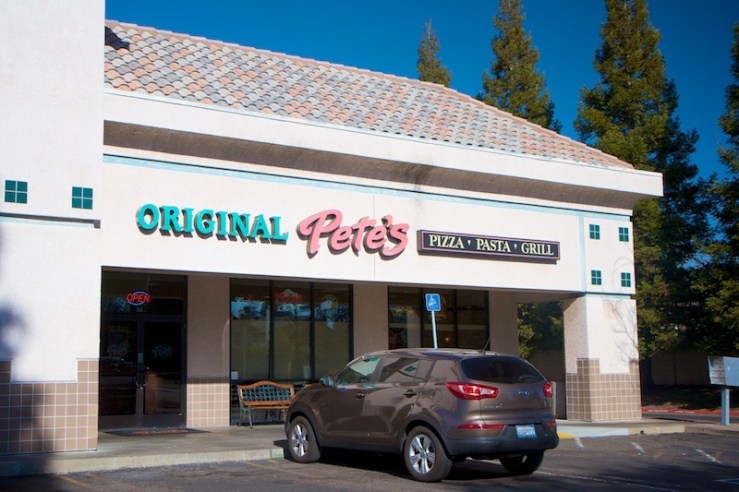 Today, after helping with a move, my parents and I were hungry for lunch.  I suggested Original Pete’s and we met there at about 12:30PM.  For a very long time I had thought that Original Pete’s was a national chain for some reason.  Turns out they are almost entirely in the Sacramento area and have just a dozen locations.  According to their website there are two different Original Pete’s.  The kind we have here in Roseville at Junction and Foothills is Original Pete’s Pizza, Pasta & Grill.  The other, more numerous version is Original Pete’s Restaurant & Brewhouse.  From what I can tell the latter seems to have a slightly larger menu and some more of Original Pete’s brand beers.  One of these is located right over on Douglas just inside Granite Bay in the Quarry Ponds Town Center.

I feel like I’ve been to one before, maybe even this one in Roseville, but it was forever ago and I don’t remember anything about it.  Once inside you can see the entire place from the entryway.  There is a small to medium-sized dining room that takes about 2/3rds of the visible space.  The rest is mostly kitchen which is open and sectioned off by the bar with seating down the length of it.  We were greeted within 10 seconds or so of walking in and taken to a table in the front/middle of the dining room.  A couple of tall (fake?) plants serve to somewhat divide up the tables in the middle and provide a tiny bit of sightline privacy depending on where you are.  For lunch today the place was maybe 30% or so filled.  We had a couple minutes to skim over the menu before our server came by to introduce herself and take our drink orders.  I didn’t get that far into the menu but I had looked over several blackboards hanging over the bar seating which had specials, desserts and beers.  I saw they had a fairly typical beer selection along with a few of their own, a honey blonde, an IPA and a brown ale.  I went with the brown and chose the larger of the two sizes available (pint [$4.75] vs 23oz [$6.25]).  My dad got the same and my mom had an iced tea.

These were delivered pretty quickly, maybe in a couple minutes.  Our beers were served in big frosty mugs.  Browns aren’t typically my first choice, but it was about the darkest thing I saw.  It was nice, cold and refreshing and flavorful.  We looked over the menu for a bit while sipping on our drinks.  Someone told me recently that pizza was the thing to get here, so I was looking over the options.  We all eventually decided to split a medium (12″, 8 slices [$18.99]).  I was drawn to the white sauce options which included the Italian Garlic (creamy ranch garlic sauce, linguica, Italian sausage, mushrooms, tomatoes and green onions. Topped with feta and parmesan.) and the Creamy Garlic & Chicken (creamy ranch garlic sauce, tender chicken breast, mushrooms, chilled diced tomatoes, red onions, green onions, and fresh Italian herbs).  Both of these sounded good to me.  My mom wanted a Hawaiian and we decided on a half and half with my dad and I settling on the Italian Garlic.  I did the ordering when the server returned and told her our pizza choice, then realized as I was just about done that they had a Hawaiian on their pizza list that was more than your typical Canadian bacon and pineapple (the Hawaiian Luau [an exciting combo of tropical delights make this pizza one of our most popular. Canadian bacon, pepperoni, mushrooms and luscious Hawaiian pineapple]).  I stopped briefly to confirm with my mom if she wanted a standard Hawaiian or this one and our server helped list off the additional items.  Standard won.  I also threw an order of the garlic cheese fries (crisp golden fries, smothered in garlic, and shredded parmesan) [$4.99] on as a starter.

The rest of the menu has a lot to choose from.  Each section of salads, sandwiches and pastas have a nice variety of tasty sounding options.  It wasn’t long before we had the garlic cheese fries in front of us was a few little plates.  It was a decent-sized basket with dark, golden colored fries glistening with garlic oil and topped with shredded parmesan and chopped, aromatic garlic.  The fries were very crisp, which is great for something like this where they can quickly become soggy.  They were very hot and the garlic was delicious.  We all loved these.  I think they are some of the better garlic fries I’ve had in recent memory.  My mom said they were like potato chips in that they are hard to stop eating once you’ve had one.  For $5 I think these are a great value.  It was a perfect size to split between three people.

Our pizza followed the fries by about 5 minutes, which was good timing as we were pretty much done with them by then, leaving just a bit in the basket to pick at towards the end.  The pizza was their original thick crust (they have a thin available, though we didn’t really consider it when looking at the menu) with a nice oven-browned crust and plenty of toppings.  The slices were fairly heavy and, although the crust was crisp on the bottom, needed some support with a second hand to lift up without loosing a bunch of the toppings, which were somewhat loose on top.  There was an abundance of thick, stringy cheese that had to be corralled back onto the slice after pulling it away from the pan.  The pan itself was kind of an interesting design that I have never seen before with bumps that kept the pie slightly elevated.  I’m guessing this helps keep any excess grease from soaking into the otherwise dry and floury underside.

The Italian Garlic side was quite good.  All the meats were flavorful, particularly the linguisa and sausage.  The mushrooms were sliced somewhat thick and the sauce was creamy and delicious.  The garlic wasn’t as strong as what we just had on the fries so I didn’t really notice it as much.  The chilled tomatoes were a nice contrast to everything else in both temperature and texture.  I was pretty happy with this side.  The Hawaiian fell a bit short of my expectations.  I do really like Hawaiian pizza from time to time, though I think I prefer it on a thinner crust since the flavors are blander than something like the Italian garlic.  The red sauce was on the spicier side of the pizza sauce spectrum with not a lot of sweetness to it.  There wasn’t a ton of it on this side, and we all prefer it this way, so that was good.  Overall though, the Hawaiian was a little boring in comparison to the other half.

I was generally pleased with this visit.  The beer was good, the fries were awesome and the Italian garlic side of our pizza was fairly solid.  I found the thicker crust to be decent.  It was nice and soft inside and had a good crisp exterior but, other than that, wasn’t anything too special.  We didn’t require much in the way of service beyond ordering and receiving our food.  Our server was quick, friendly and efficient in that aspect, so I had no complaints there.  Original Pete’s is a good all around spot with a little something for everyone.