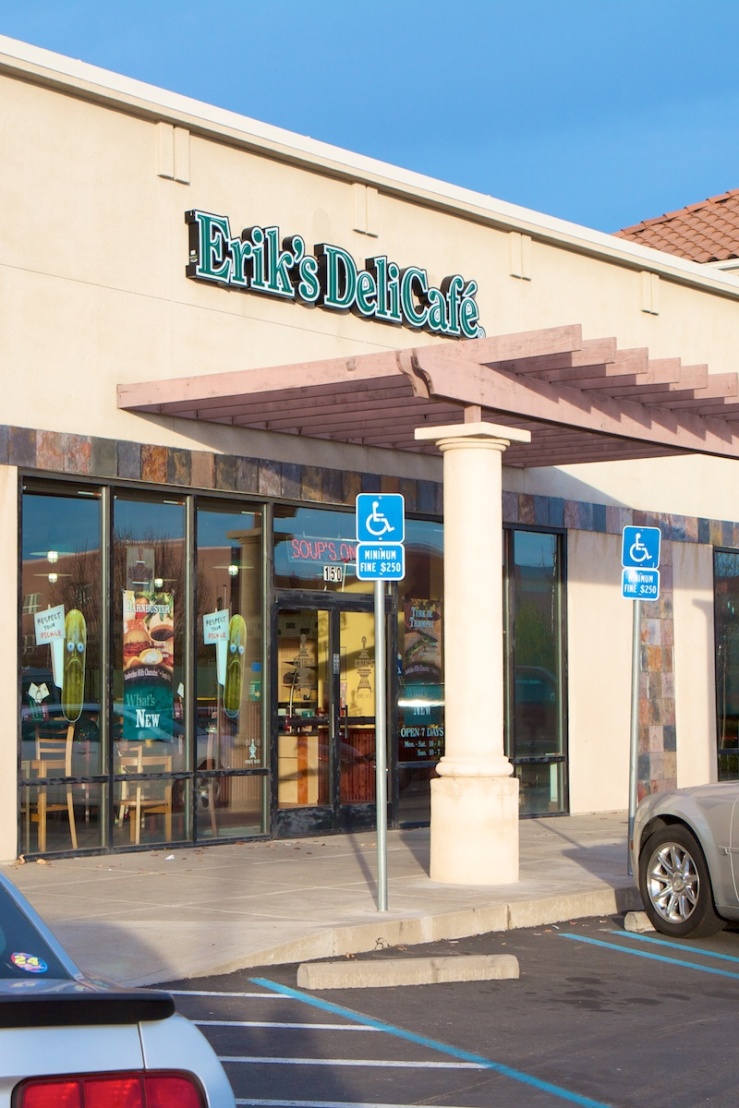 Time to get back to work!  Today I had a pretty light and early lunch and found myself very hungry when I got home from work.  I was anticipating this and had picked out Erik’s DeliCafe in advance.  This is a Bay Area chain that popped up here in Roseville sometime over the summer.  We seem to have the only non-bay area location at the moment.  This one is located at the corner of Lead Hill and Rocky Ridge, in the shopping center which is strangely quiet due to Walmart’s odd closure. 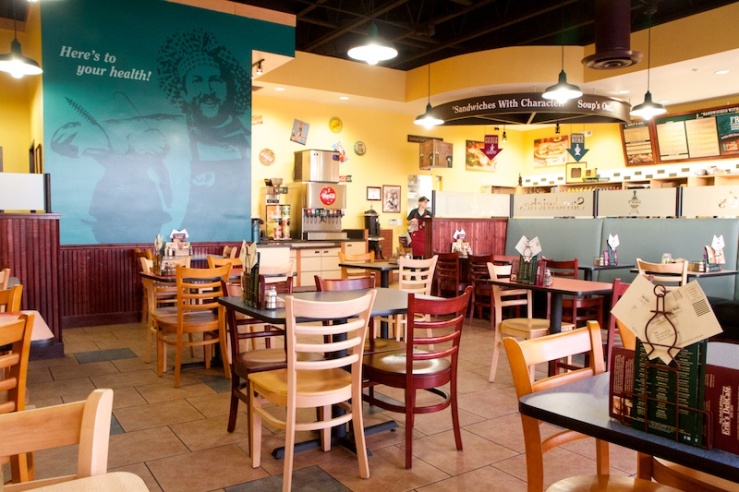 I cruised in just before 4PM.  The little strip where it’s located always seems to be busy with cars, but I bet half of them are purely employees for the handful of small businesses in the building.  I stepped inside to a dining room that was pretty quiet, save for the jazzy music that was playing.  It kinda took me back to Sim City 3000’s upbeat soundtrack.  This was originally Pasta Village.  The basic layout remained similar, but overall the whole place has undergone a complete makeover.  The colors and counters were all different, as were the tables and chairs (which more often than not seem to get reused by the next place, although if I recall, Pasta Village relocated to Lincoln rather than closing entirely). 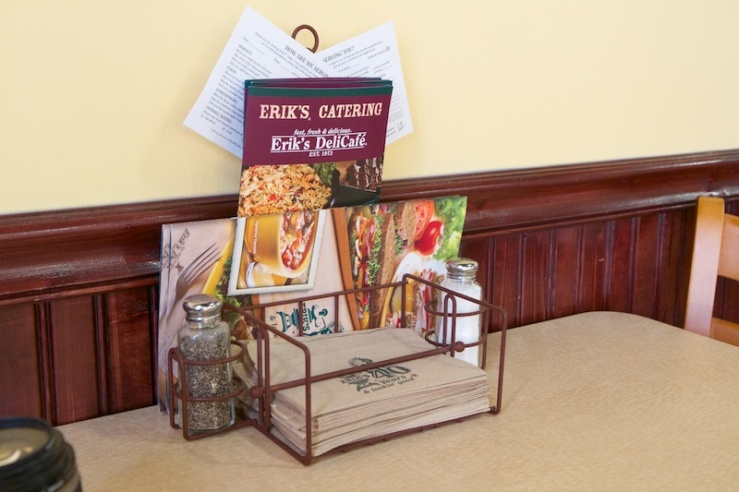 I was greeted by the friendly cashier and told her that I had no idea what I was getting.  This wasn’t really true, but I wanted to go over the menu a bit more before ordering.  I had seen Erik’s Classic Holiday Sandwich on the website and was pretty certain it was the one.  Studying the menu again, this time in person, I noticed they had clam chowder available.  I’m always a sucker for clam chowder so I mentally added that to my order immediately.  None of the other sandwiches really jumped out at me like the holiday one had.  Erik’s Classic Holiday Sandwich is: Roasted Turkey Breast piled high and served with traditional Stuffing, whole Cranberry Sauce and Erik’s “Secret Goo” on sliced Rosemary Sourdough Bread [$7.29].  The first time I read “Erik’s Secret Goo” I kind of cringed and thought “That doesn’t sound too appetizing” in my best internal George H. Bush Simpsons voice.  I’m sure that it’s just some sort of mayo-based sauce. 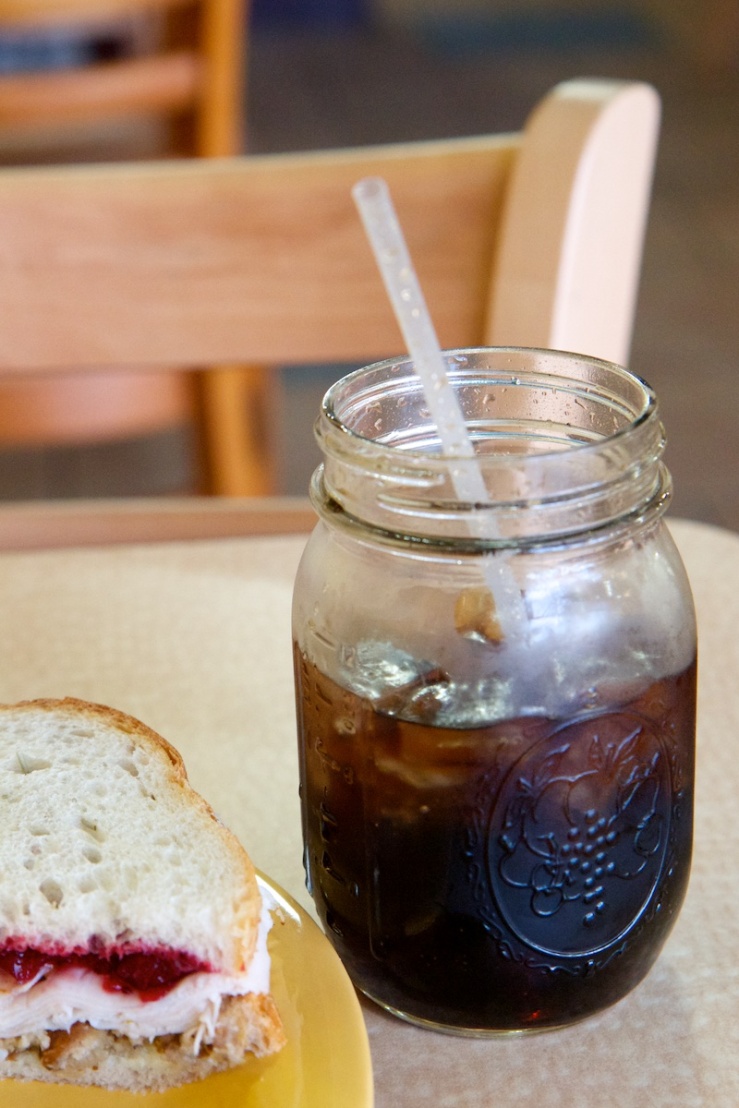 Stepping up to the register, the cashier turned her attention back to me and I placed my order of the holiday sandwich, a cup of clam chowder [$1.85] and a fountain drink [$1.09].  I paid and was handed a small jar for my soda and a number to place on my table.  I filled up my soda and picked up a spoon on my way into the dining room and had just picked out a table when the cashier brought out my cup of chowder.  This was actually a cup, in terms of size, compared to the small bowls you get other places.  It was appropriately priced however and seemed like a decent value.  The appearance was just slightly on the translucent side, but other than that about what you expect.  From it’s aroma I anticipated a more authentic clam chowder flavor.  Don’t get me wrong, there are some chowders that I love, such as Claim Jumper’s, that don’t really feature clams as much as you would expect.  This one however was more on the end of the spectrum where you would find chowders served along the coast where they’re actually bringing in fresh clams daily.  I’m not going to go as far as to say it was that good, but it was a pretty solid clam chowder considering where I was having it.  I looked at a menu that was at the table and saw that they offered a sourdough bread bowl of it and decided I would probably be back to check that out. 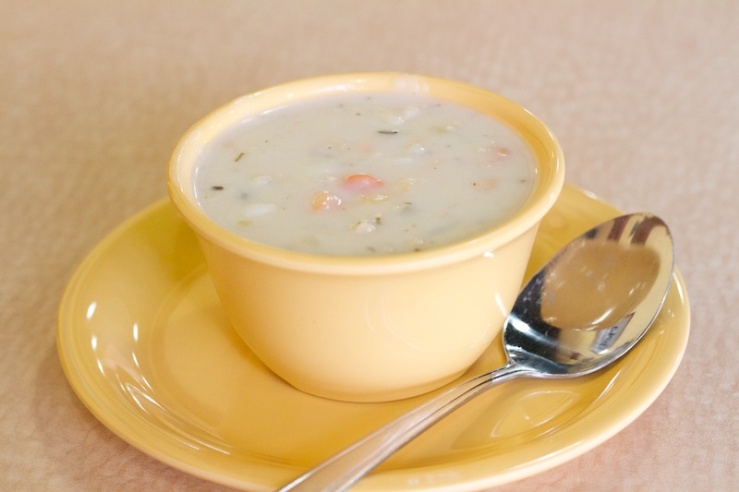 Just four minutes into my soup, my sandwich arrived.  As with most “production” foods, this one did not look quite like the photo on their website (first image below).  It didn’t look bad though, perhaps just a bit thin.  The cranberry sauce was bright and clearly present atop a decent amount of thinly sliced turkey.  Hiding underneath that looked to be a skimpy layer of stuffing.  Picking it up I realized it was a warm sandwich.  I was totally expecting cold.  The bottom seemed warmer than the rest, perhaps the stuffing was the warmest part.  It made the bottom slice of bread a bit mushy and a slight challenge to get ahold of at first.  Once in hand I held it upside down where it felt more secure.  Biting into it, I was met with the rich and intensely flavorful cranberry sauce.  The turkey seemed to be warm, though not as warm as you’d think it should be.  It seemed a little bland in comparison to the cranberry.  In fact I found the entire rest of this sandwich to be very bland.  The stuffing really didn’t add much except heat and a little bit more bready texture.  I could see the “secret goo,” though that too was lacking any noticeable flavor.  The cranberry sauce stole the show here, and being a little on the tart side it wasn’t very enjoyable. 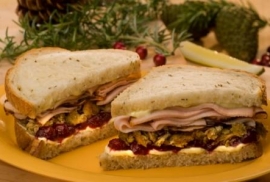 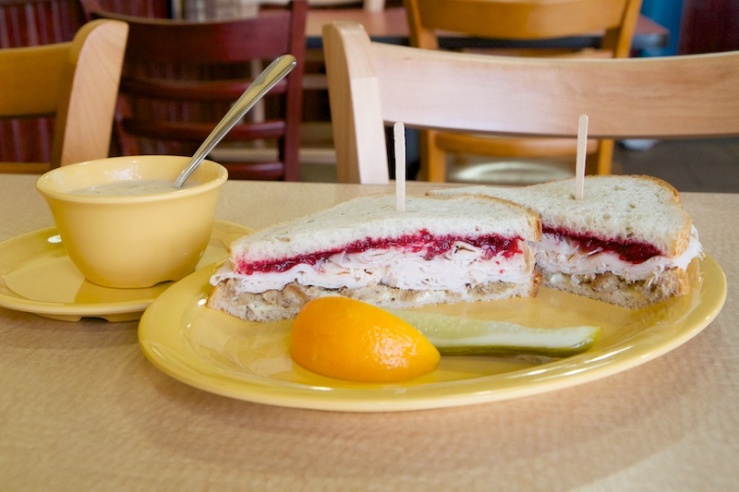 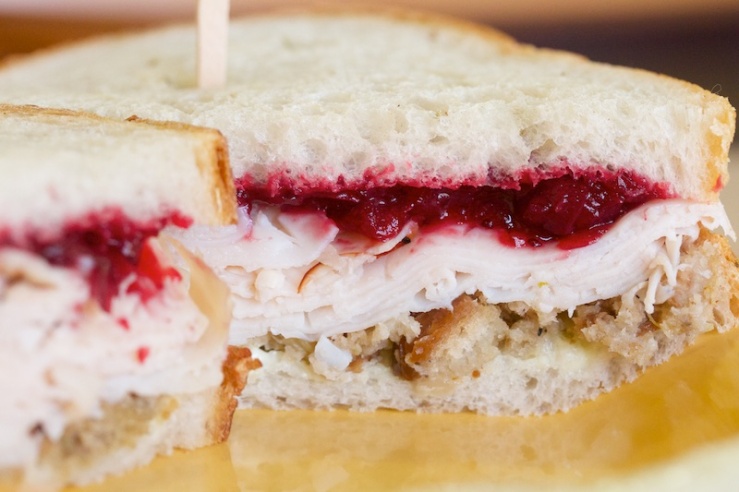 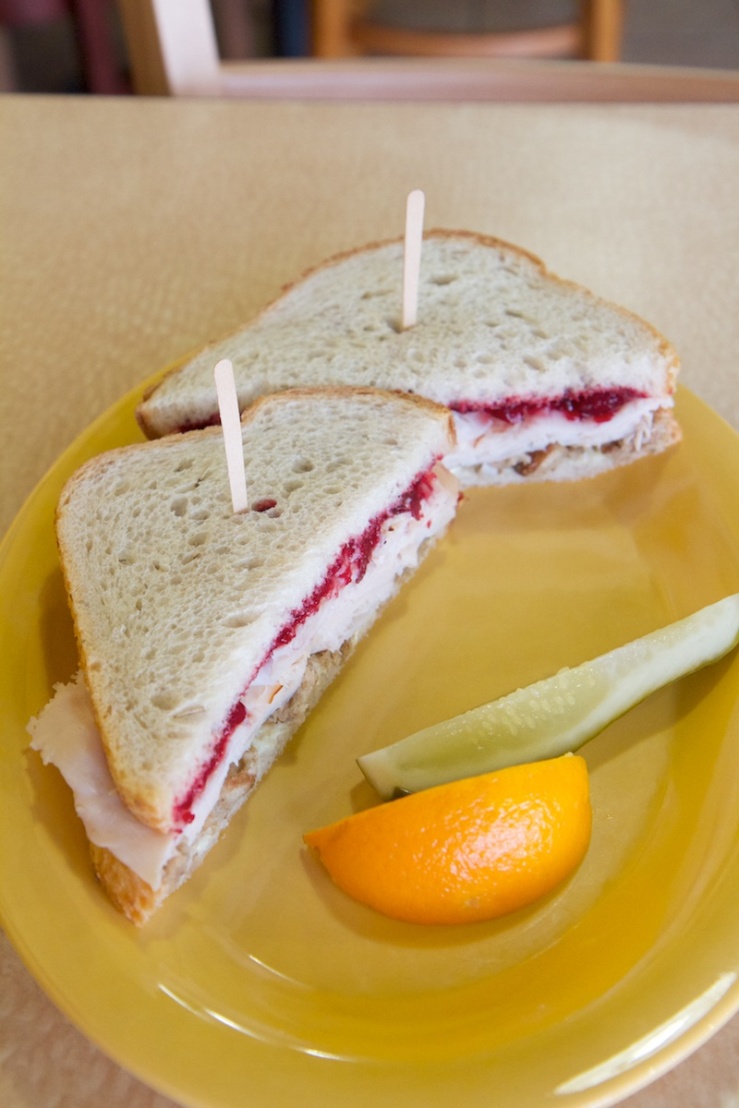 I had really come here hoping to love this sandwich.  I’ve not typically a fan of cranberry in most forms, to be honest, but there is one sandwich with it that I can never miss when I’m in town, and that’s The Bobbie from Capriotti’s of Las Vegas.  It’s similar in it’s ingredients and is one of the best sandwiches I’ve ever had.  Perhaps the standard I had set was too unrealistic.  Maybe Erik’s regular offerings are a better representation of this DeliCafe.  The soup was solid and a reason to return on it’s own.  I might give a salad a try if I come back for more chowder at some point.  The Classic Holiday Sandwich however, I cannot recommend.