Today I thought I’d check out Mitsuko’s Cafe & Deli, across from HP on Foothills, but they apparently decided to close earlier than their posted hours.  I feel like it wasn’t long ago when I could have just gone to the next closest restaurant and it would have still been one that I hadn’t visited and posted here about.  With just a small handful of remaining places it’s a little harder to change plans on the fly like that without carefully checking my list.  Tonight I was in luck however, as I had earlier been juggling Mitsuko’s and Kazoku Teriyaki & More.  Kazoku was not too far away, just a few miles up Foothills at Junction.  After nearly losing the front end of my car to someone who had very urgent Jack in the Box Drive-Thu business to attend to, I parked and headed in. 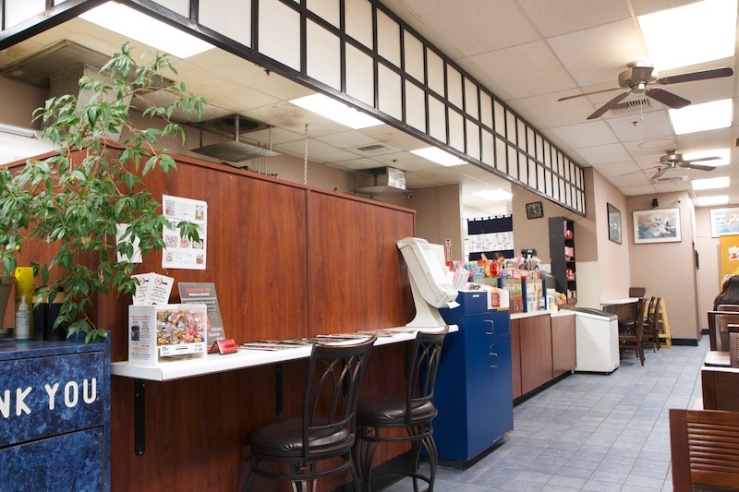 I arrived at 5PM sharp and there were just two other customers there at the time.  The space is narrow, with a long line of 4-seater tables along the wall all the way to the back.  The kitchen ran most of this length on the other side, with a gap at the front where servers come out to deliver food, and there is also a little counter here with a few stools.  Kazoku serves sushi, and this is prepared in plain view just to the left of the register.  Past that the rest of the kitchen is obscured by a tall divider.  I wandered up to the register which is right about in the middle of the restaurant.  Reading the menu on the back wall was not about to happen.  Either the type was super small, or I need to get my eyes checked.  They had a couple of laminated menus right there on the counter luckily, so I turned my attention to those.

The entrees were primarily teriyaki dishes with a variety of meat choices.  Most of these came in a choice of a bowl (served over white rice), plate (served with white rice and house salad) or bento box (served with white rice, gyoza[2pc], CA roll[3pc] & sunomono).  I figured I would get the chicken, then saw pork as an option, then finally noticed the combo plate [$8.99] which says “choose any two items above.”  I confirmed with the cashier, who was waiting patiently, that this meant I could do a half chicken, half pork teriyaki plate.  I was pretty hungry so I asked her how much food it was.  She said it was a full plate so a pretty good amount (I didn’t know how big the plates were yet).  I very quickly scanned over the other side of the menu which looked to be mainly sushi, including nigiri, sashimi and rolls.  Just to have a little variety I asked for the 3 piece sashimi [$3.99].  The fish is chosen by the chef, so this was a bit of a gamble even though I like most kinds.  With a soda, my total came to about $15.

I took a seat at the front and less than five minutes later the cashier brought out my sashimi plate.  She asked if I would like chopsticks and got a pair for me, then was back to the kitchen.  Maguro (tuna) was the fish selected by the chef which was fine by me as it’s my 2nd favorite behind sake.  A splash of soy sauce into the little side dish and I was away.  This sashimi was fantastic.  It was fresh, flavorful and a bit chilled.  Actually pretty refreshing and a nice little appetizer before my dinner. 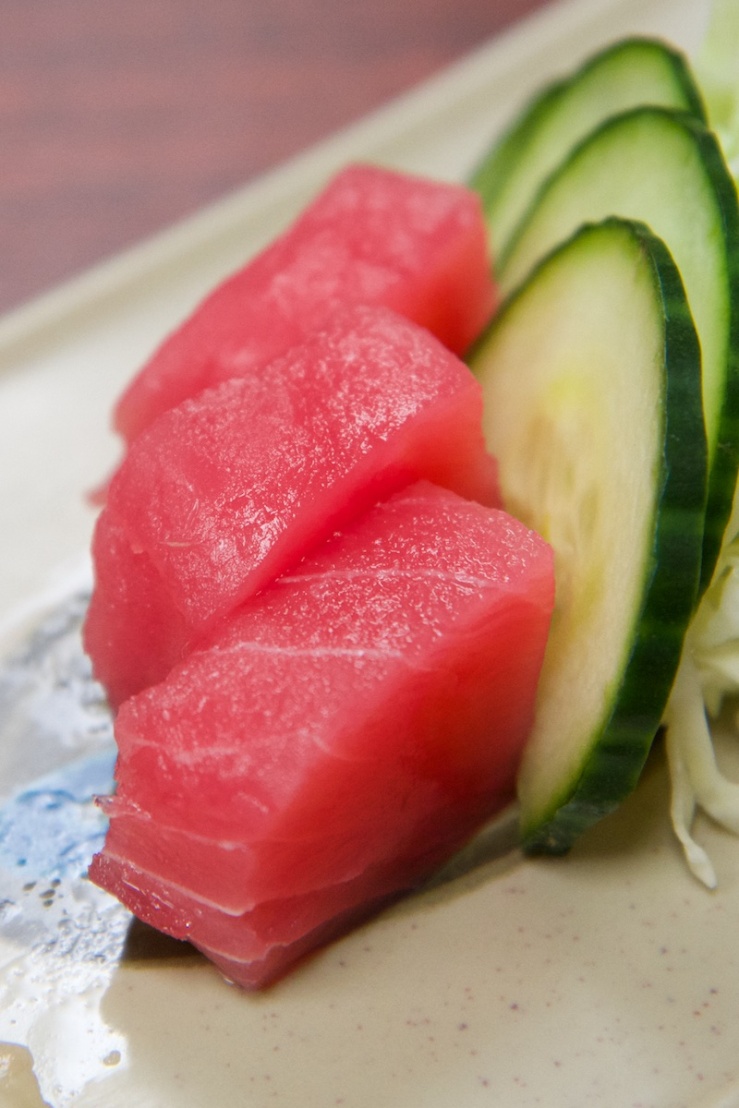 It took me just a couple minutes to devour the sashimi, and another minute later I had a big plate a teriyaki sitting in front of me.  My expectations based on the cashiers description were met, and then some.  There was a good amount of both chicken and pork, as well as a decent sized house salad (cabbage salad with special house dressing) and a big scoop of steamed white rice.  The salad dressing looked like it might be the type that a lot of sushi joints use which it fairly sweet.  Indeed it was, and I was quite pleased with that.  There was just the right amount to the cabbage, which was crisp, cold, and sliced nice and thin.  The pork was served in small pieces.  I’m not sure what the name for this is.  It’s not shredded, pulled or sliced.  Chopped perhaps?  Anyway, it was hot, very tender, and drizzled with the sweet yet savory teriyaki sauce.  It was very, very good.  Somehow, the chicken was even better.  This was sliced into almost bigger than bite-sized strips.  There was a tiny bit of charring, so I assume that they cook it over a flame.  It was incredibly tender, even more so than the pork, and packed with tons of flavor aside from the already rich teriyaki sauce.  Underneath the meat was a grab bag of lettuce bits and slices of carrot here and there.  Other than that I pretty much demolished this plate. 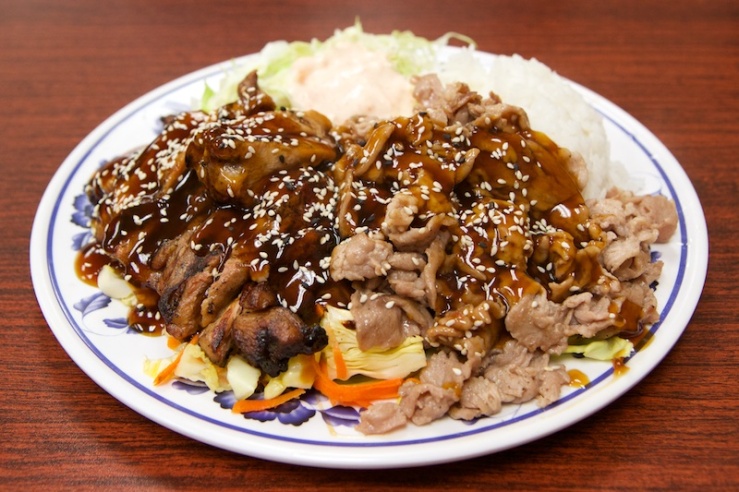 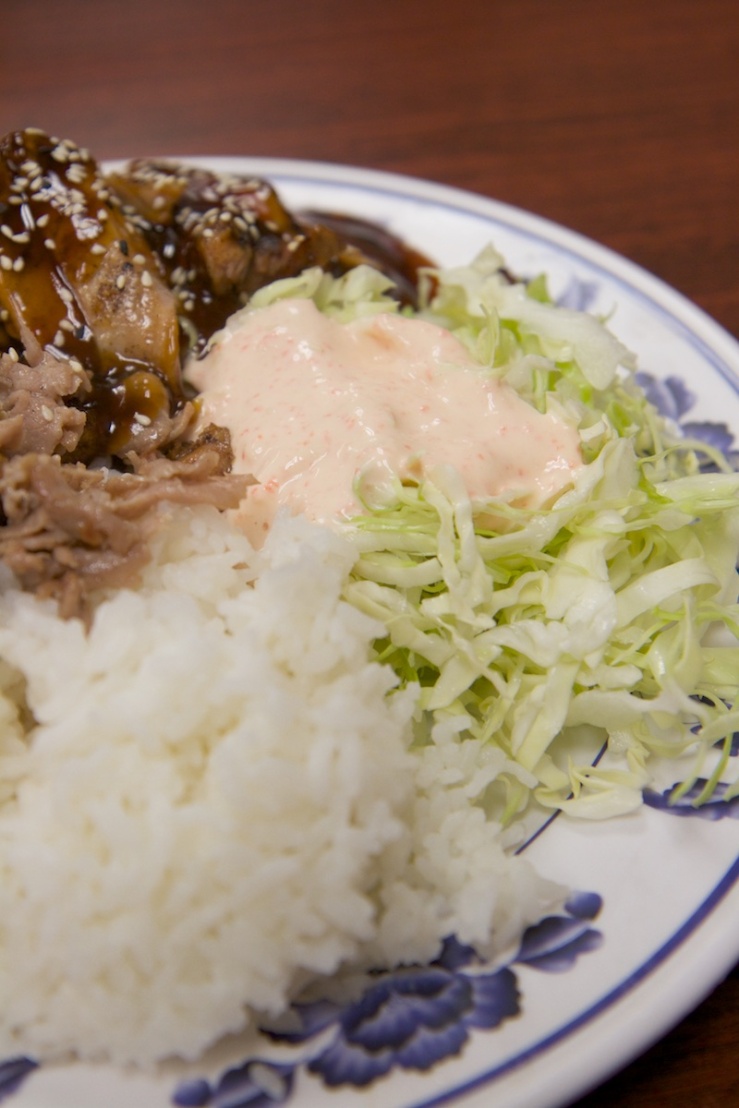 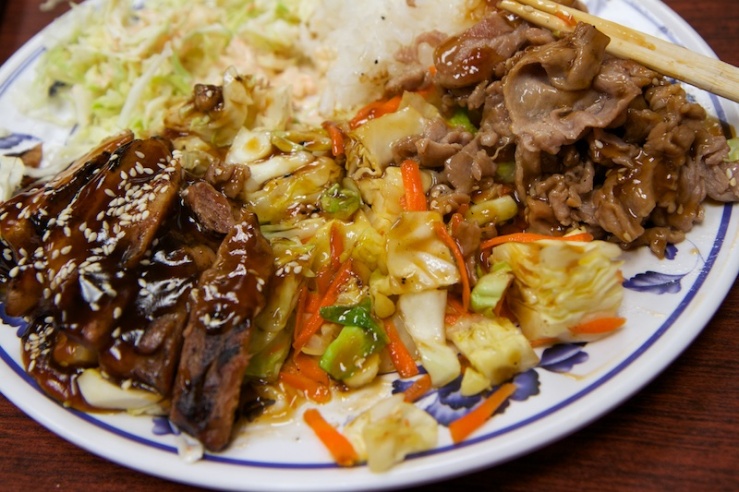 I was extremely pleased with my experience at Kazoku Teriyaki & More.  The food was outstanding and the portions generous.  The sushi prices (particularly the sashimi and nigiri) were noticeably lower than what you’d usually pay, particularly for this quality.  I know I’ll be back here for both sushi and teriyaki for sure.  On the subject of sushi they have a note on their menu that reads “Kazoku offers sushi quality fish for sale, see store for prices & details.”  I might even check that out as I’ve always been curious where to find sushi grade fish so I can have sashimi at home.