Tonight I hadn’t planned on going out but by the time I got home, after a relatively long day and small lunch, I was starving.  I tossed out my plans for a quick meal at home and grabbed my camera.  I arrived at my destination on Harding Blvd, right next to the 7-11 and Chevron, Cafe Delicias.  I’ve been past here hundreds of times, maybe even thousands.  I’ve only been inside once, though not even to eat.  I dropped in on some friends towards the end of their meal.  That was years ago.  I couldn’t even remember what it looked like inside.  I thought this was a one off family run joint.  Indeed, it’s family run, but they have a few other locations in Rocklin and Auburn as well. 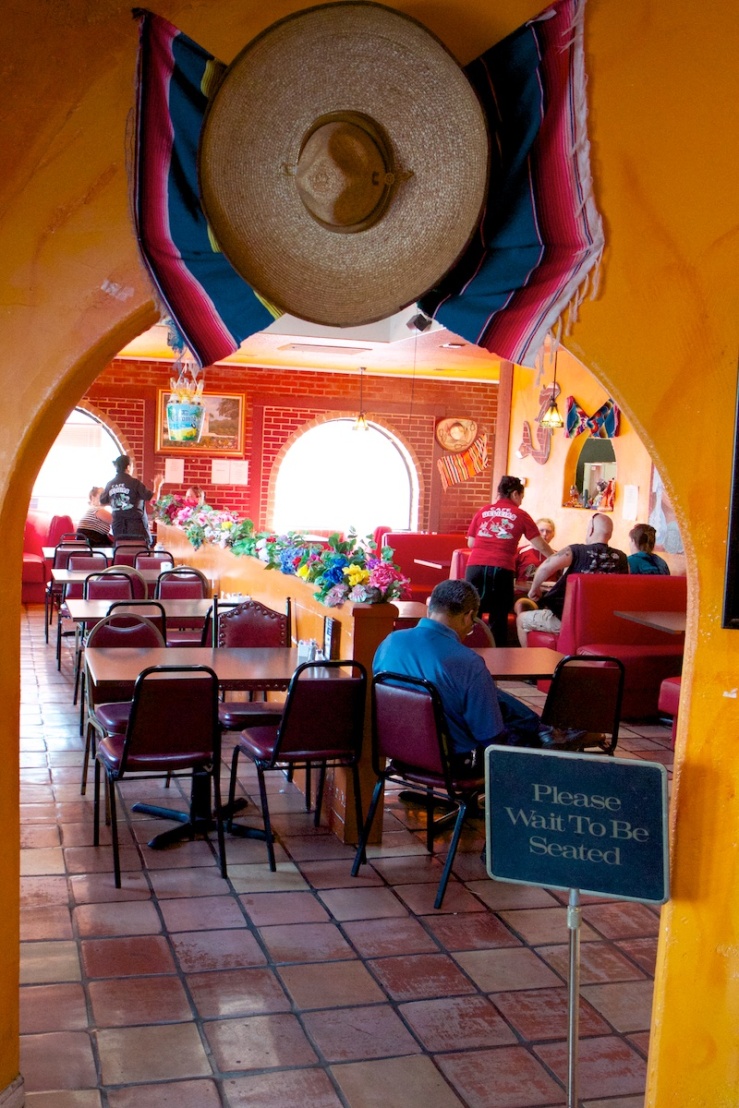 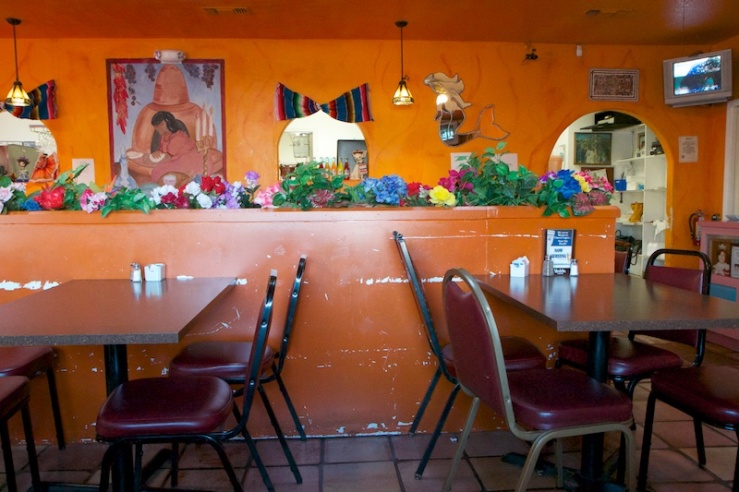 I arrived at 5:15 to a pretty quiet restaurant.  Just inside the doors you step into a small waiting area with a view of the dining room through an archway.  The couple employees I saw were both talking to customers.  Once I took a step through the arch I was noticed immediately and seated in a booth by the window.  There isn’t a lot to look at out there, just the old, cracked parking lot and the shopping center across the street.  I had a menu placed in front of me as I sat down and a minute later chips, salsa and silverware were brought out.  In addition to the salsa fresca there was a condiment-type bottle with another kind to try.  A 2nd small dish was provided for it.  The woman that brought this to me asked what I would like to drink.  I quickly scanned over the back of the menu, which was light on selection, and asked if they had horchata, which they did [$2].  She brought that out pretty quickly and then I met my server.  I said I needed a few minutes so she went off to the back while I perused. 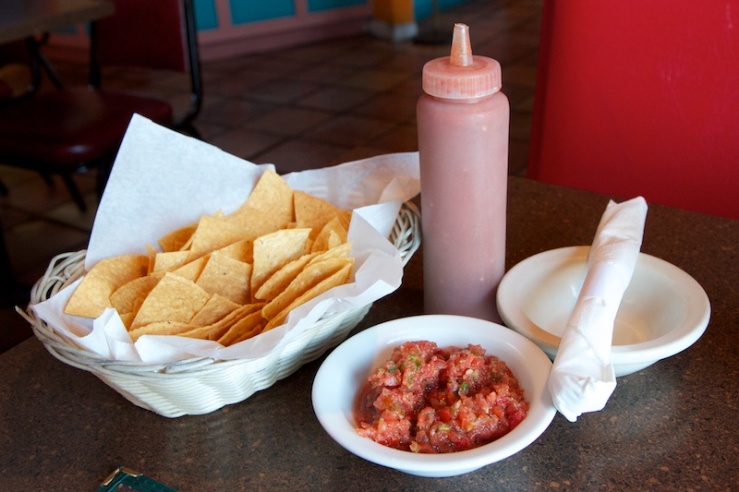 I first set out looking for my favorite carnitas dish, but did not find it.  Additionally, I didn’t see carnitas, or pork in general, as an option in hardly anything.  Things were looking very grim.  Defeated, I settled on the #3, Two Tamales (Homemade pork tamales smothered in sauce)[$10].  I like tamales and it was one of the few items on the menu with pork, so I think I made a good choice.  When the server came back to take my order she said that the manager wanted to know what the photos were for.  I told her it was for my Roseville food blog and she asked if it was some sort of advertising, which I said no to.  With that she happily wrote down my order, asked what kind of dressing I wanted on my salad and was on her way.  That was probably the most anyone has ever asked me about it in the 2+ years I’ve been doing this.

I started munching on the chips and salsa while I waited on my food.  Several more people were seated while I was there but it never got very busy.  The chips were room temp and didn’t have a whole lot of flavor to them, but they did have a nice thickness to them and had a satisfying crunch.  The salsa fresca did taste very fresh, I would be surprised if they didn’t make it in-house.  It had just a tiny bit of heat that was cumulative.  There was something in it that was a bit strong, perhaps cilantro, that I wasn’t crazy about, so I moved on to the mystery bottle.  In it was a red sauce (something more like salsa roja?) with a much more bold chili flavor, though not a ton more heat to it.  I stuck with this through the majority of the chips.  My horchata was pretty good.  It was light on the cinnamon and sweetness overall, which was actually pretty refreshing.  I’m usually sick of sweet horchatas (even if they are delicious) by the end of a big glass, but this one I could  have kept going after a couple refills without a doubt.

Soon my salad arrived, which came with my tamales.  It was a tiny little bowl with perhaps a bit too much dressing on it.  It was a tasty blue cheese, there just wasn’t enough lettuce to work with.  The lettuce that was there was mixed with some slivers of carrots here and there and a decent amount of purple cabbage.  It was all fresh and crisp. 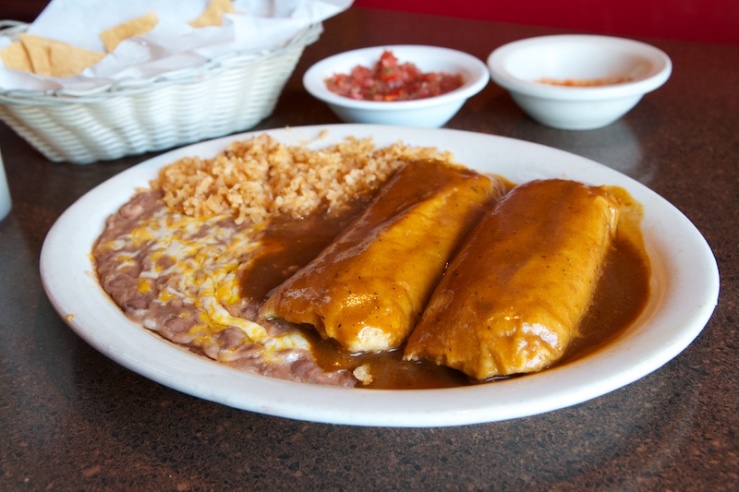 It was another 12 minutes after the salad had come out before my entree arrived.  She cautioned me that the plate was very hot as she set it down.  The sauce that the tamales were sitting in was bubbling, and I nudged the plate a bit further away so I could get a quick little video of it, and HOLY CRAP, she wasn’t kidding.  I feel confident in saying that this was probably the hottest plate I’ve ever received, anywhere (with a potential exception to one that was set in front of me when I was a little kid which I burnt my hands on.  I don’t remember it but I’ve seen a photo of me with bandages).  I seriously had to sit patiently for quite a while before anything was cool enough to attempt to eat without melting my face off.  Later it was confirmed to me, as I mentioned that she was not joking around with the plate, that they put the entire thing into the oven.  I kept testing it throughout my meal but it wasn’t until I was nearly done that I decided it was cool enough to keep touching indefinitely.  Crazy.

Anyway, as for the food itself, the tamales were…decent.  The amount of pork in them was a little disappointing.  What was there was somewhat tasty, but it didn’t blow me away.  I don’t think there was any cheese in it either, or at least I didn’t notice it if there was.  The corn wrap was OK as well, but again, nothing special.  It was a touch dry in some spots, suitably moist in others.  The sauce was pretty good with a nice rich chili flavor, though I wish there had been more of it to help the rest of the bites along.  I actually kind of liked the rice and beans more than the tamales (well, mostly the beans, I mixed them up after a few bites of each).  I left most of them for last.  They were a little above average (which really isn’t that impressive considering the rice and beans I’ve encountered thus far). 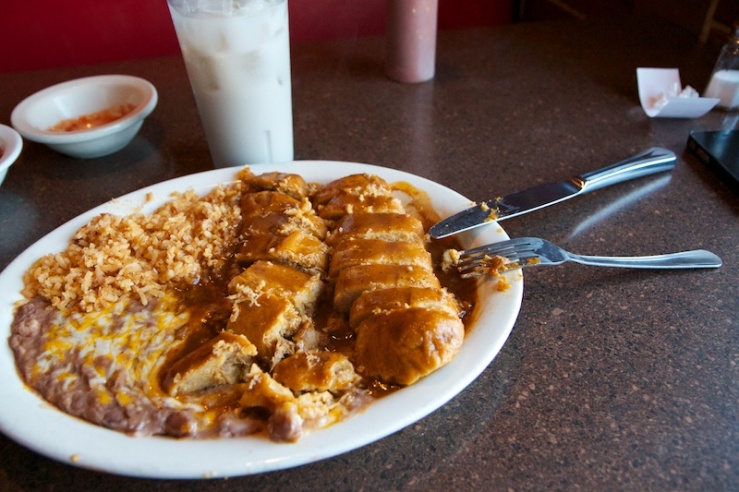 So overall, pretty meh.  I was satisfied with the customer service and my server in particular who was very nice.  After the manager had sent her to ask about the photos I felt like i was being watched almost the whole time by one or two people from just inside the kitchen.  Maybe I was just imagining it though.  The real kicker here was when I got up to the register to pay and looked around a bit, I saw a paper on the wall that said in small print “Special: Carnitas”.  You’ve got to be kidding me.