I hadn’t intended to do a post on Whole Foods.  I had come here last Saturday because Fabio was supposed to make an appearance to promote some sort of protein shake or something, and I thought it would be a hilarious celebrity photo to have.  Unfortunately he cancelled, so no photo op for this guy.  Luckily it was not a complete waste since also thought I would check out the Tap Room while I was there.  Disclaimer: I know a couple guys that work at this whole foods and had direct interaction with both of them during my visit.  That said, the service and food I saw going out to other customers while I was there looked to be about the same as I received. 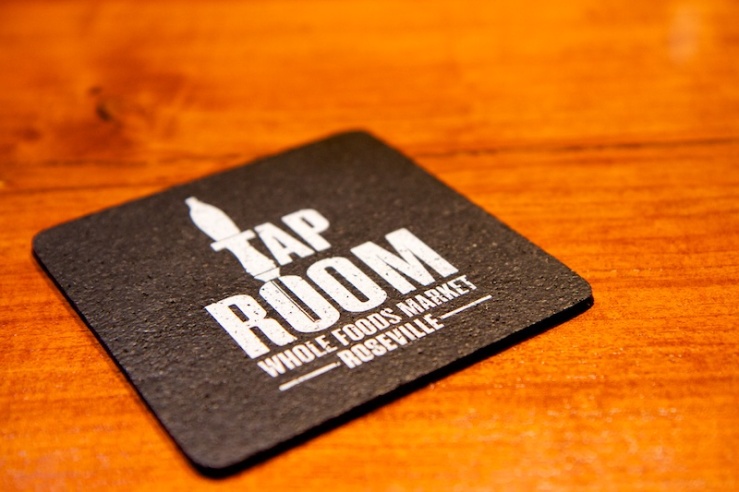 I rarely wonder into Whole Foods.  Usually it’s to buy beer or a ribeye (or both!).  As such I was completely unaware that, earlier this year, they opened this “Tap Room” on the right side of the market.  It’s basically a fenced-off area of seating with a small bar where they have craft beer, wine and a selection of pub-style food.  My friend Justin and I sat down at the bar and both had an Auburn Alehouse Shanghai Stout (served on nitro), which is my favorite year-round beer from the brewery/restaurant up there.  Today they were also serving this as a beer float, with a scoop of vanilla ice cream.  It didn’t sound that good to me but I was handed a little 4oz sample to try out and it was actually pretty awesome.

We weren’t planning on eating there until we saw a burger come out for someone and decided it looked damn good.  Added to that, on the menu we noticed that they have a $1 corkage fee, which we asked about.  This applies to any wine or beer purchased in-store (not something brought in from outside), which basically means you have access to a much bigger selection than is on tap.  So we decided to get a good beer from the wall of cold beer on the other side of the store and bring it back to have with food there at the Tap Room.  We picked out a Darkest Hour from Anchorage Brewing Company to share.  This is a Belgian style imperial stout aged in French oak pinot noir and rye whisky barrels and is 13% ABV.  It’s a super dark, super flavorful beer with notes of chocolate, nuts, vanilla, oaky bourbon and a touch of wine.  This is right up my alley.  It was a little pricey though at I think $15 or $16 for the 750ml bottle. 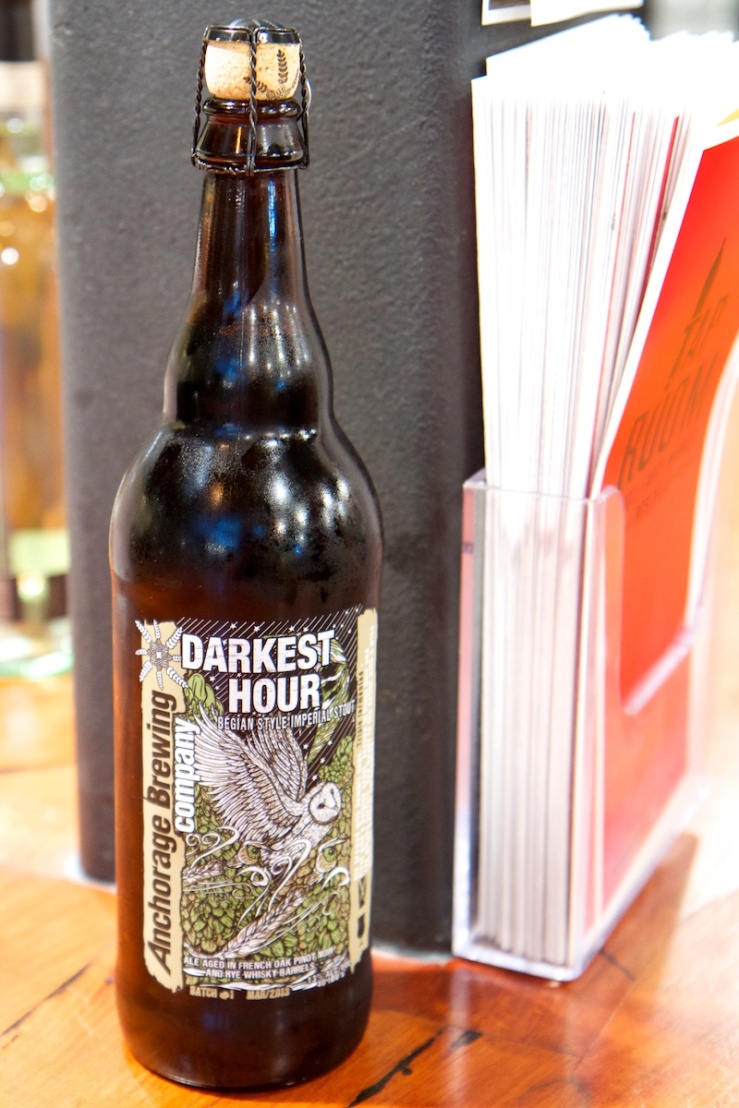 We each ordered the burger & fries (ground beef, turkey or veggie burger topped with cheese, lettuce, tomato, onions, pickle, mayo and ketchup)[$9].  You can add bacon, avocado or chili for $1 each.  Some interesting things to note: 1. The beef is apparently from Whole Foods own meat dept from what I was told, and they have some pretty great beef.  2. Cheddar cheese is standard but they offered to see what the deli had available when Justin asked if they had Gruyere.  Purchasing some from the cheese dept and bringing it over was also an option.  He stuck with cheddar to keep it simple.  There were some fry options, garlic Parmesan or sweet potato, I believe.  It may also be possible to do onion rings in place of the fries.  We both went with regular.  I added bacon to mine and we asked for caramelized onions. 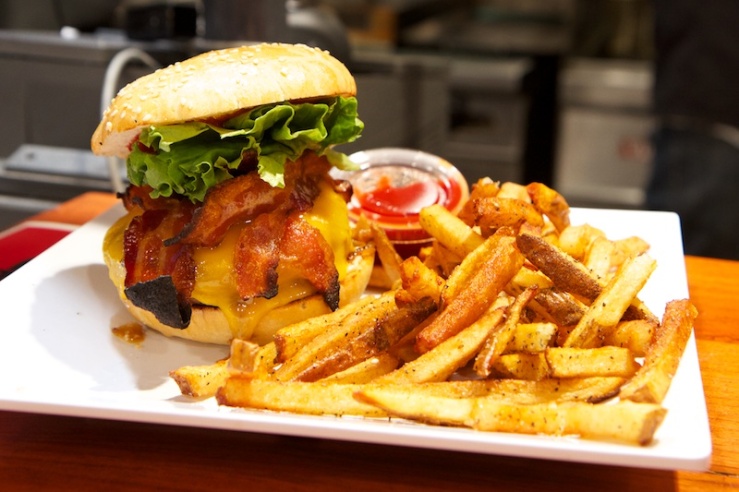 It was probably 10-15 minutes for our burgers to be cooked up right in front of us in the little kitchen.  The patty was somewhat thin and draped with a thick slice of melted cheddar.  My bacon was crisp and piled on in a good amount.  They cook their burgers to medium as standard, we asked for something below that (not sure why we were vague about it but it’s just how it went).  There was just a hint of pink to mine, Justin’s was mostly brown throughout.  The burger nonetheless was very juicy and I had to set it to the side of my plate to avoid setting the bun directly in the newly formed puddle.  It was fantastically delicious and full of flavor.  The cheddar was particularly tasty.  It’s definitely one of the better burgers in Roseville for sure.  The fries were pretty decent, though I definitely like mine crispier.  Despite their dark appearance they weren’t overly cooked, in fact some were downright limp.  They appeared to be seasoned with salt and pepper only, and did taste pretty good.  I suspect these could be excellent if I ask for them to be fried longer.

This place was not on my radar at all, but I can definitely say that I will be back.  The burger was great and the price was reasonable.  Just about everything on their small menu sounds really good (I’m eying the grilled cheese right now…).