This morning I met up with my grandma for breakfast at Ginger’s.  This island-themed family restaurant is located at the corner of North Sunrise and East Roseville Parkway.  I’ve been here at least once before for lunch and possibly once for breakfast as well though I don’t remember it.  I recall being unimpressed with the burger I had at the time, which I think is why I haven’t really been back.  I arrived a little early, took some pictures and sat down in the waiting area in front.  “Seat Yourself” was the sign they had posted up, and I didn’t really see any employees for a while.  The first one, in fact, was a guy arriving for his shift.

The entryway is nicely decorated, with a good amount of seating arranged in semi-circles.  Statues of a surfer guy and girl stand behind the seating.  Three or four big panes of glass with the Ginger’s logo stand in this area with water running down them continuously.  Walk a little further in and you’ll be at the fully stocked bar.  An area with tall bar tables is separated from the main dining room by a short wall.  Further back past the bar is an area with seating that looks like it can be closed off for private parties.  The patio, which is accessible from outside or a door near the bar, is fairly large and quite nice looking with it’s big hut style canopies.  The weather was wonderful and the patio was in the shade of the building at this time of day.  By the time we left there were several tables seated out there.

At 7:45 my grandma had arrived and we took a seat in the front of the main dining room, which was brightly lit through the big windows.  We were greeted fairly quickly by our server and handed menus.  She took our drink orders and headed off.  Less than a couple minutes later we each had a steaming cup of coffee and a glass of water in front of us.  Turns out their coffee is Starbucks, which made it a touch pricey for coffee in a restaurant at $2.69.  Ginger’s serves breakfast, lunch and dinner all day.  The menu is large.  Even though it seemed like they had a bit of everything, I had trouble finding what I was looking for, French toast.  I didn’t think they had it until I spotted it in the sides part, where you can get a single slice.  Clearly it must be there if you can get 1 slice as a side.  Finally I found it under Groovy Griddle Combos (it was also in two other spots which I just completely missed.  It’s a big, dense menu with a lot of stuff to look through).  I ordered that, which came with 3 slices of French toast, 2 eggs and a choice of 2 bacon slices or 3 sausage links.  I asked for my eggs over medium and the bacon crispy. 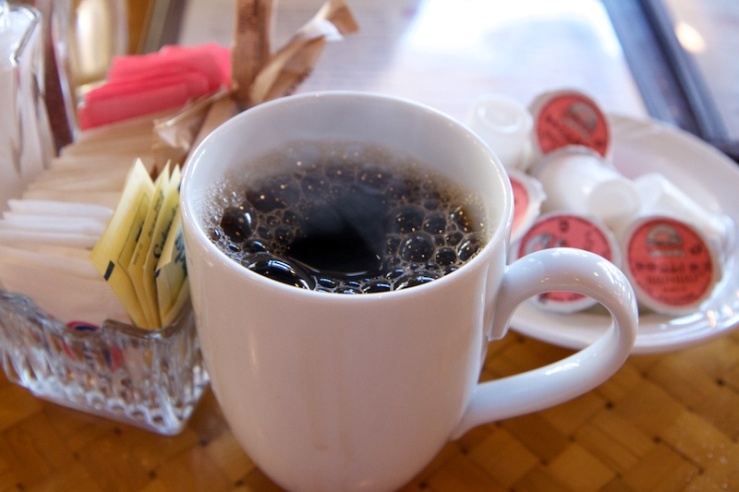 From there it was a rather long wait.  Our server came by once somewhat early on with the pot of coffee, and neither of us really needed any, but my grandma took a little warmup pour.  After that she wasn’t seen until the food came out and she never came around for coffee refills again.  Our food took exactly 23 minutes from the time we ordered to getting it.  Maybe I’m spoiled by fast service at most places, but this felt like a long time.  The restaurant wasn’t particularly busy, there might have been a half dozen other tables seated while we were waiting.  By the time we left it had picked up and was closer to 1/3 or half full.

On one plate sat my three slices of French toast.  It’s a good thing I was hungry because it was a lot of food.  On a side plate were my eggs and bacon.  The eggs were done just as I like them and I tore through them immediately before they got cold.  The bacon certainly came out crispy.  It was black around some of the edges.  I mean, I like crispy bacon, but this was way past that.  My French toast was pretty good overall.  The edges on some pieces were a bit dry, but the rest was good.  Inside it was moist, soft and almost a bit doughy and sweet.  There was a very light sprinkling of powdered sugar over it all.  Some nice soft butter, that melted on the hot slices immediately, and warm syrup to top it off and this was pretty solid.  My grandma had the combo with 1 pancake, 1 egg and 2 slices of bacon.  She said she enjoyed it.

So the food here was good overall, minus the way overdone bacon.  The service, however, left a lot to be desired.  She came by infrequently and only came by the once for coffee refills (too early also).  We were still eating when she delivered the check which is a little rude I think.  We have a few amazing breakfast spots in Roseville but I don’t think this is one of them.  It is merely adequate.