Tonight’s dinner was El Parian Taqueria & Cantina.  It is located on Fairway Drive, directly across the street from Home Depot.  I headed in at about 4:45PM to a mostly empty dining room.  Just a few tables were in use by the half dozen or so customers.  An employee was finishing up mopping when I stepped inside.  She immediately put the mop away and met me at the front counter where she waited patiently as I scanned the menu. 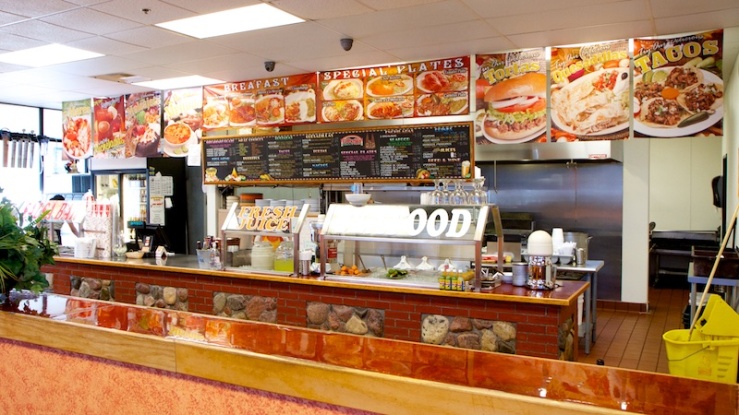 You might think this is an obvious choice given my previous taqueria visits, but I was feeling squirrely today.  I eyed the chimichanga and some of the other special plates with photos while she answered the phone and took a quick order for pickup.  After she hung up I stepped up to the register and asked for the chimichanga.  She asked if I wanted everything on it, to which I squinted a bit and asked what that was.  She explained: Inside- choice of meat, beans, cheese and rice, Outside- guacamole, sour cream and pico de gallo.  This all sounded good to me.  After I selected carnitas for the meat she asked me if I would like black, pinto or refried beans.  I chose refried and then picked a lime Jarritos from a cooler.  In addition to Jarritos they have your typical selection for a taqueria.  In addition they have a few draught beers behind a separate and kind of lonely looking bar.  Once I was paid up (just over $11) I wandered off into the largish dining room to claim a table.

It’s  quite big for a taqueria.  There are three distinct sections of tables.  Along the front of the building are sets of tables.  A short wall divides this section off from another row of tables and the front counter.  Around a corner and towards the back are a few more.  The most striking thing about this place is the bar.  It’s odd because it looks largely unused, save for the beer taps.  If you order a draught beer they will go all the way to the other side of the restaurant and behind this bar to pour it, then come back.  I almost sat at it.  The chairs at each table are not your typical 4-legged restaurant chairs, they have a lot of character to them.  They seemed like they might not get cleaned extremely well due to their design.  They didn’t feel dirty or grungy, but I just got that impression from them.

A few minutes went by before I realized that I didn’t get any chips, so I headed up to the salsa bar to get a basket.  I picked two salsas, a chipotle salsa and one that I think was salsa de aguacate (based on what it looked and tasted like, and a bunch of Googling).  I found the chipotle one (which is usually my go-to) to be much, much sweeter than any I’ve had before, but it did have a good, solid and immediate kick to it.  I probably would have stuck with this if the other wasn’t so awesome.  The salsa de aguacate (again, I think) was incredibly smooth and had a coolness to it that was really nice for this hot day.  As for the chips, they were easily the best chips I’ve had from a self serve salsa bar.  They seemed to be incredibly fresh, where with others you can tell have clearly been sitting for hours, if not days, by their texture alone.  These were crisp and once bitten into they sort of…dissolved is not the right word I’m looking for, but something like that.  In other words not like old, stale chips that you crunch away on and they remain as tiny shards of chip just waiting to get lodged in your throat.  Not like that at all.

My lime soda was the second Jarritos I’ve ever ordered, after the mango one I had at Taqueria Los Altos.  I wasn’t feeling this one right away, but later while I was eating, it started to grow on me.  It wasn’t as strong as I expected, definitely not as strong as the mango.  Mango is definitely my favorite so far.  About seven or eight minutes from the time I ordered, my plate was brought to my table.  On the plate was a MASSIVE chimichanga.  It was kind of silly how big it was.  I think I stared at it, turning the plate around to check it out from all angles, for a solid 30 seconds thinking “holy crap.”  One of the first things that I noticed once I got over the size were the plastic fork and knife.  They felt really out of place here, I fully expected to have silverware.  It’s not exactly an Adelbertos.  Getting past that, I started carving the beast.  The fried tortilla was crisp and flaky, particularly at the end.  Inside I found a river of molten cheese atop rice, refried beans and pork.  The cheese quickly cooled as it was exposed to the air and quickly took a more stringy/gooey composition that at times required the knife to cut through.  Everything else inside held onto the heat for much longer.  The beans in particular were incredibly hot and quite tasty.  The rice added a nice texture but flavor-wise were completely drowned out by everything else.  The carnitas were also very hot.  Super tender, they almost melted in your mouth.  Here and there I’d get bites of superheated beans and pork along with the cool pico de gallo from on top, which was in comparison very cold and a bit of a shock when I didn’t expect it.  My only complaint about this monstrosity was the guacamole.  It looked and tasted like something they probably get out of a can.

I left here very impressed, and also carrying a to go box with the third of my chimichanga that I wasn’t even remotely able to finish.  Obviously the chimichanga was fantastic and monstrously proportioned, but one of the things that actually sticks out to me the most was the salsa bar.  At most taquerias they’re just OK.  Here I wish I had room to go back and snack on some more great chips and that awesome, smooth salsa de aguacate.  In addition, the service was friendly and efficient.  Even the cook, who I had asked for the to go box from, was personable.  El Parian Taqueria & Cantina definitely ranks up there with the best in Roseville.  I know I’ll be back.