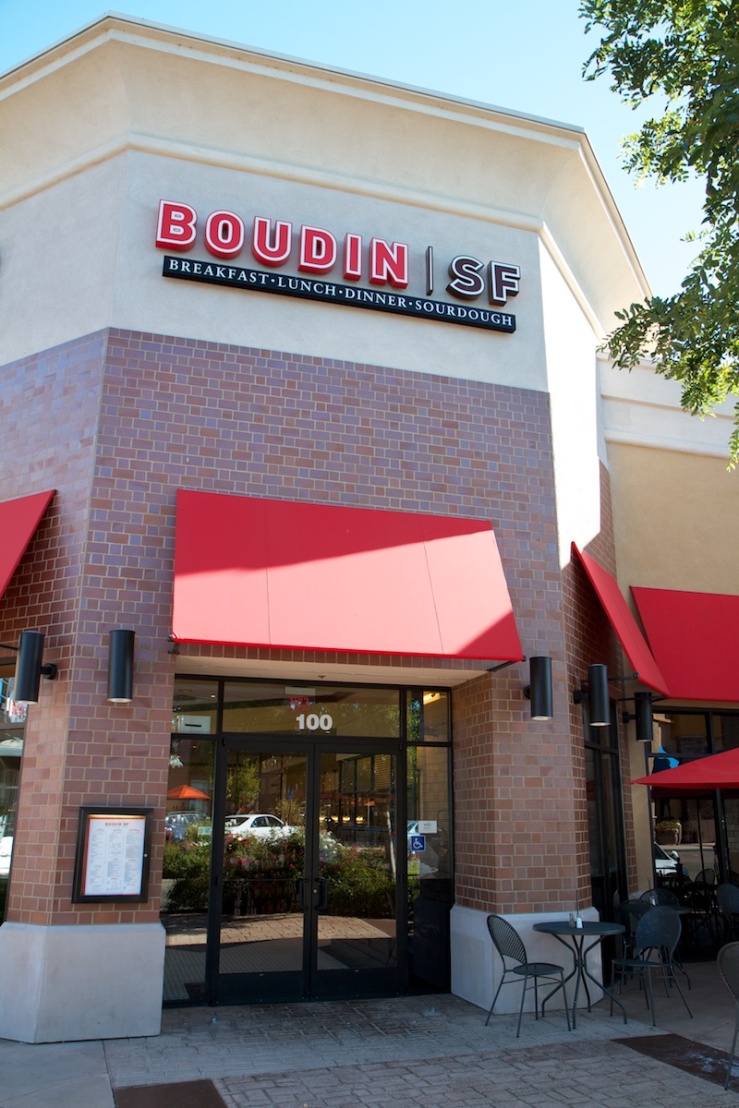 Today I went to Boudin SF, located in the Fountains.  This is one of numerous bakery/cafes spread throughout California and originating from the famous Boudin Bakery in San Francisco.  I’ve never eaten here or at the San Fransisco one despite having walked/driven past them both many times.  In fact, I wasn’t even really sure what they offered besides clam chowder and bread.  After a short search through the Fountains I found Boudin towards the back, across from Zocalo and Dave & Busters.

I headed in at around 4:45PM.  At first it didn’t seem like they had more than a couple customers, but once moved in a little further I could see about a dozen or so people siting in booths, which had been blocked by a display of bread.  I was surprised to see that they bake their own bread in-store.  The bakery is on display through windows in the entryway.  I figured they would have had daily deliveries from the mothership in San Francisco.  The wall behind the register is a nice display of some awesome looking fresh bread. 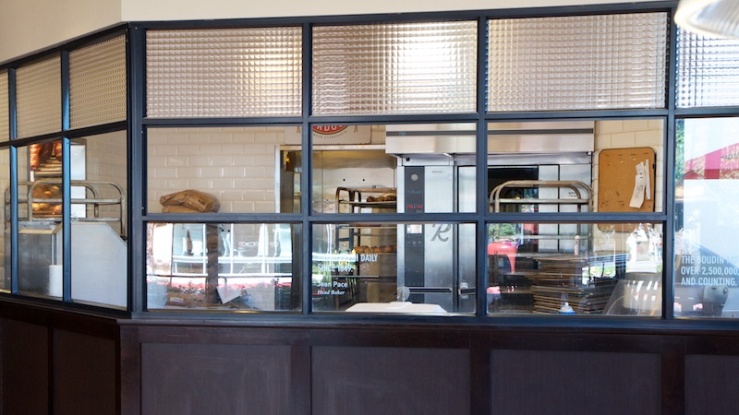 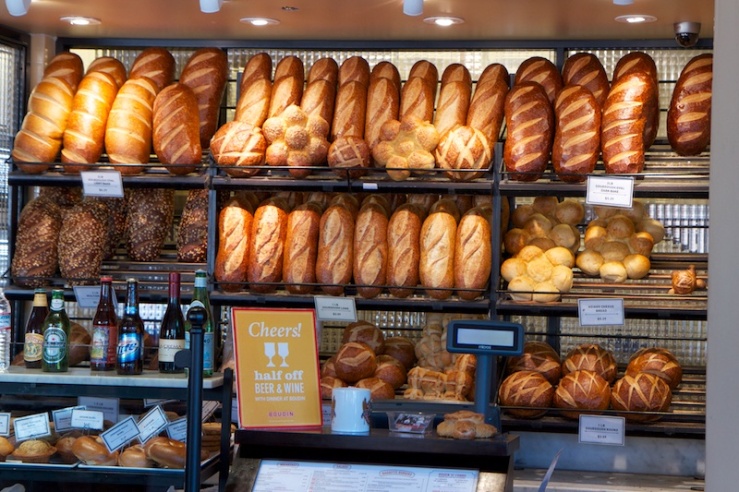 I waved the guy behind me forward as I was still looking over the menu.  He bought a loaf of Ciabatta to go.  The menu consists mainly of soups, salads and sandwiches.  They also have baguette burgers and grilled cheeses.  I knew I had to try the clam chowder bread bowl.  I also wanted to try a salad with it.  Under soups on the menu it says you can add a side Caesar or side spring salad for $2.49.  The soup itself is $6.49.  Above this I saw a soup & salad combo for $8.79 where you get to choose from all of their salads.  I felt like I was probably missing something here and asked the cashier why, for 19 cents less, you get a better selection.  She didn’t really have a reason, only confirmed that yes, that was correct and it’s really the better deal.  So I went ahead with the combo and chose the Goat Cheese & Apple salad (mixed greens, sliced Granny Smith apples, Laura Chenel goat cheese, dried cranberries, toasted almonds, white balsamic and citrus vinaigrette).  For beverages they have Coke products (with, interestingly, Dr Pepper rather than the expected Mr. Pibb) as well as various bottled juices and also a small selection of beer. 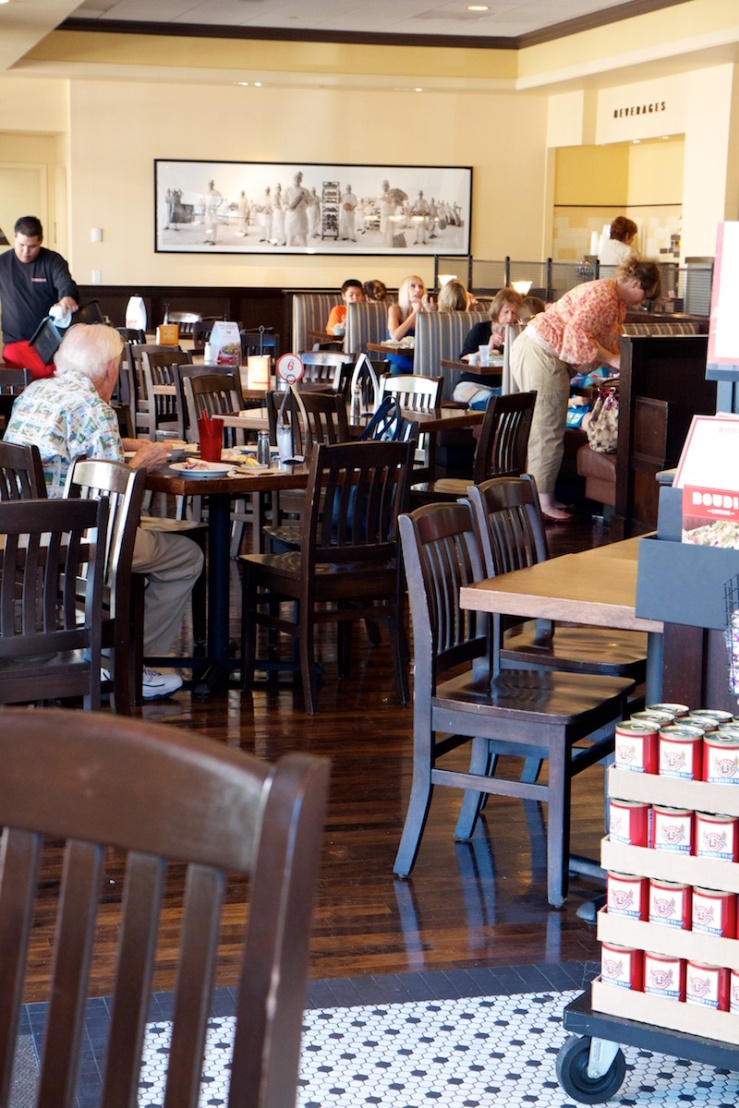 I paid and was handed a number on a coaster-like disc.  After filling up at the fountains I headed back to the front of the cafe where there are 4 tall tables by the window.  They have a good sized patio to the side of the building and a smaller one around the corner in the front.  My little coaster-number went into a stand in the table and within just a few minutes an employee was headed my way with a plate of food.  After setting it down at my table he asked if there was anything else he could get for me, and then was off to the kitchen again when I said I was all set. 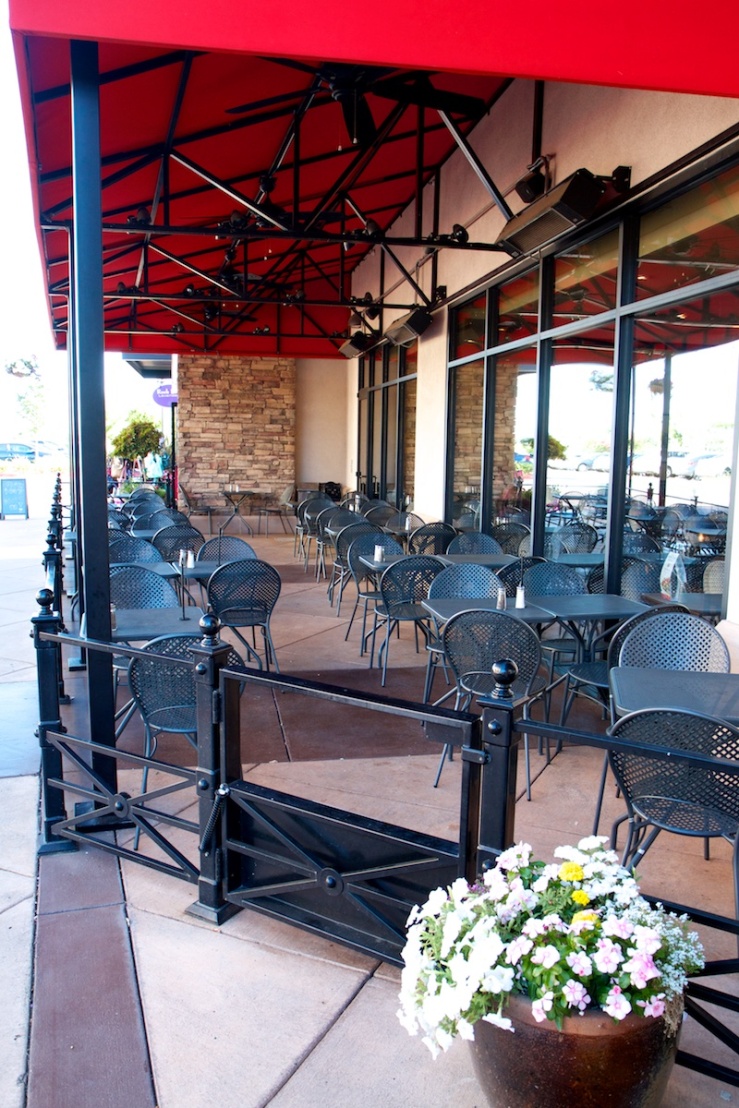 On the crowded little plate was my bread bowl, a bit smaller than I was expecting, and a nice looking salad with lots of bright white goat cheese.  Additionally there was a little pad of butter, I assumed for use on the “lid” of the bread bowl.  The chowder was quite hot so I focused first on the salad.  I don’t know why I this didn’t cross my mind when I decided on this salad but I’m not crazy about apples in many things.  I like them just fine on their own, but to me they really seem out of place in just about everything but pie.  That said, I didn’t mind them here.  I do admit, however, that I ate all of them first so that I could enjoy the salad without them, haha.  It was really tasty.  The white balsamic and citrus vinaigrette was quite mild and enjoyable, not at all overly citrus-y, which I am leery about when I see “citrus” in any description.  All the greens were fresh and the toasted almonds tasted great.  The almonds were a nice contrast in texture to the super smooth and creamy goat cheese.  This cheese was very rich and I was careful to not get a huge gob of it with a small bite.  It seemed to be just slightly above room temperature and right on the edge of melting into a goo right there on my plate.  I thought that the cranberries, of which there were quite a lot, made the whole thing just a touch sweeter than necessary, but overall I thought this was a pretty good salad. 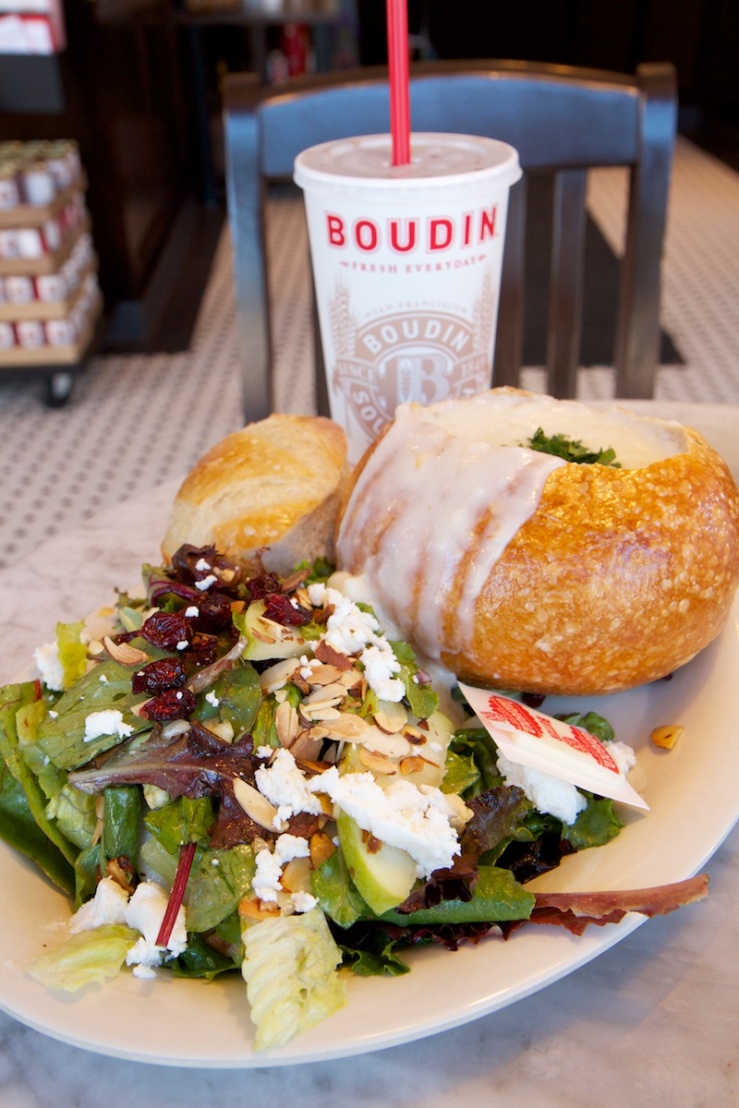 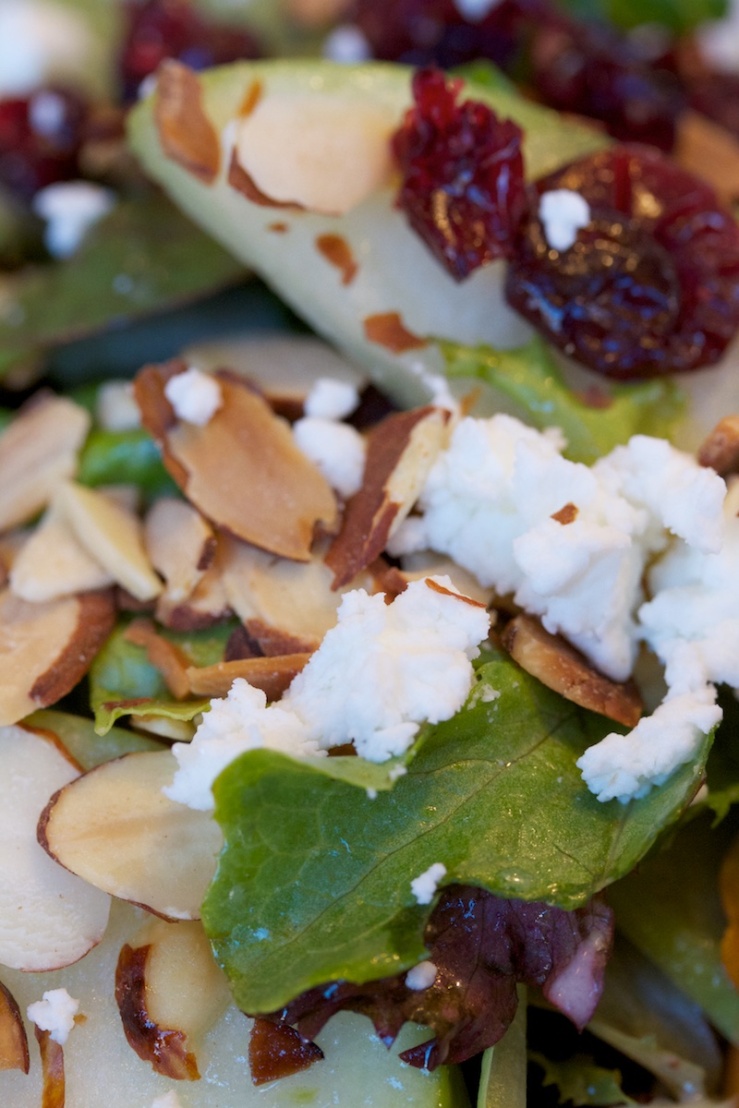 The clam chowder I was less enthusiastic about.  I think this is mostly due to it’s consistency, but a little based on the overall flavor.  Potatoes in it were the largest chunks by far.  They weren’t huge but they were much bigger than anything else.  The clams were very small, almost unnoticeable until I looked for them specifically.  I said in my Claim Jumper post that I’m a huge fan of their clam chowder bread bowl.  Compared to that one, Boudin’s just seemed kind of thin to me and had that ocean-y sent to it.  Claim Jumper’s is super creamy.  Boudin does have a big advantage though in their sourdough bowl.  It’s streets ahead of Claim Jumper’s that, in hindsight, is decent at best.  It seems noticeably fresher and more flavorful.  I enjoyed eating the lid after I had finished everything else. 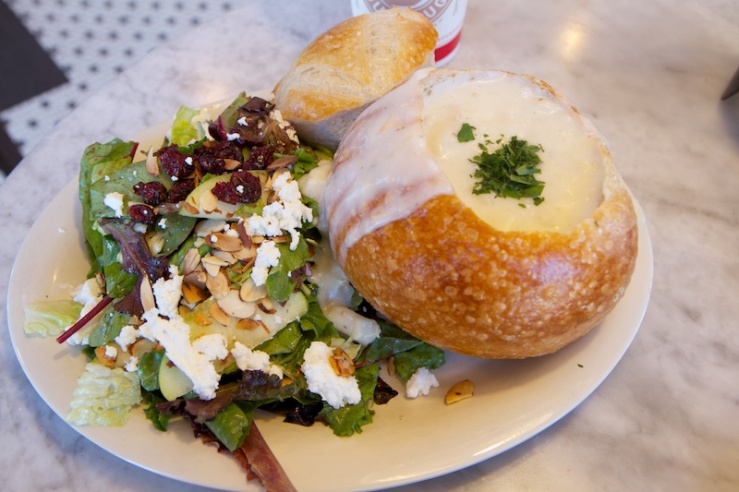 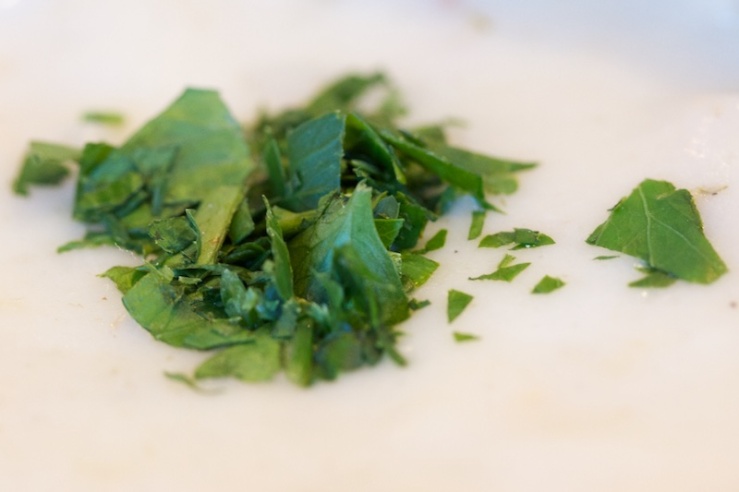 Both of the employees I interacted with were very friendly, the service was fast and the restaurant, while already looking immaculate, was being constantly cleaned by one or two people the entire time I was there.  While this certainly wasn’t a home run, I saw a lot of potential.  I’d actually really like to come back and try a grilled cheese, sandwich or burger on their awesome sourdough.  I’ll update this post if/when I do that.