I went to Namaste Nepal tonight for dinner, arriving at about 5:30PM.  I’ve never thought much about this restaurant, located in the far back corner of Roseville Square at Douglas & Harding.  I think because I had been to this location a long time ago when it was a Chinese buffet and had a bad experience.  Since then, at least one more buffet has come and gone.  I took note when Namaste moved in but didn’t pay it much more attention than that, almost waiting to see how long it would be before they also went out.  Fast forward to just about last week and I noticed they were at the top of some kind of Yelp list, and right around then I also get a recommendation from a reader to check it out.  Intrigued, I noticed a good opportunity to see what they’re all about tonight, so I did. 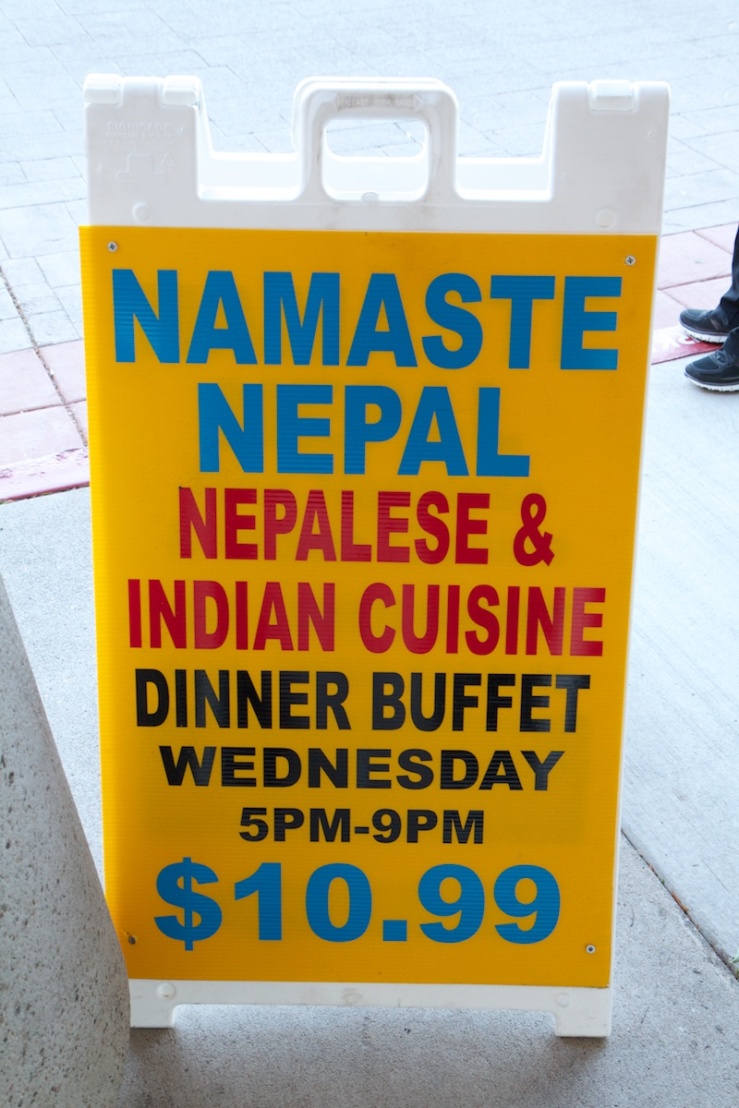 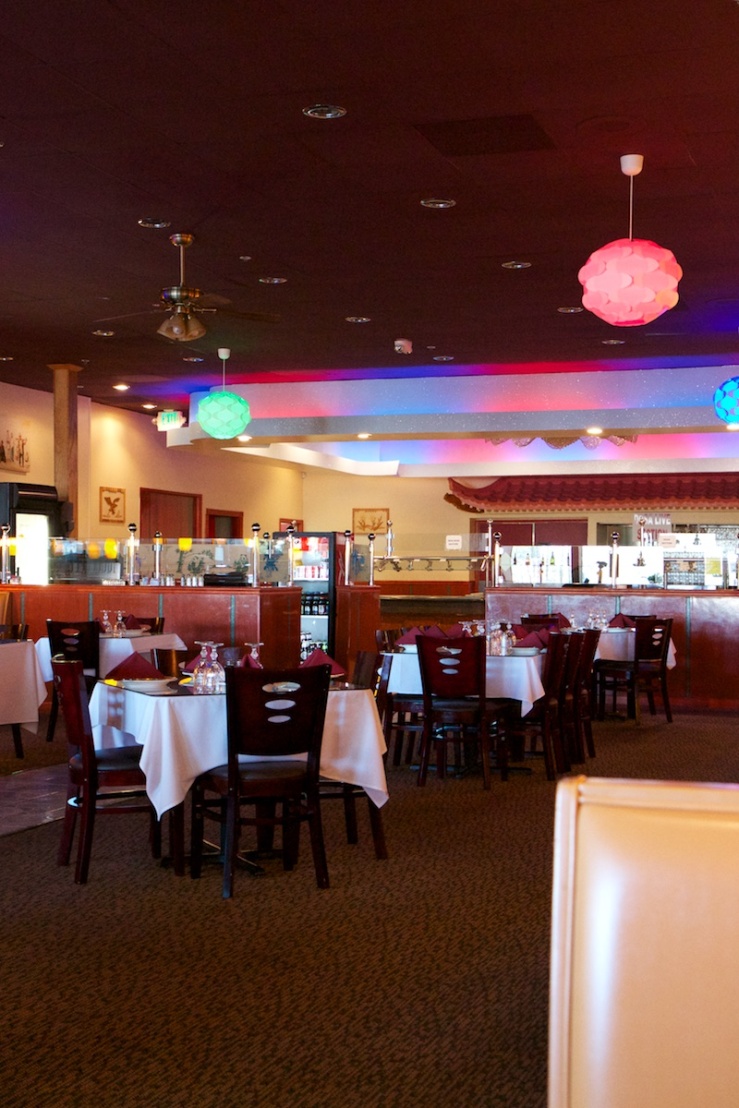 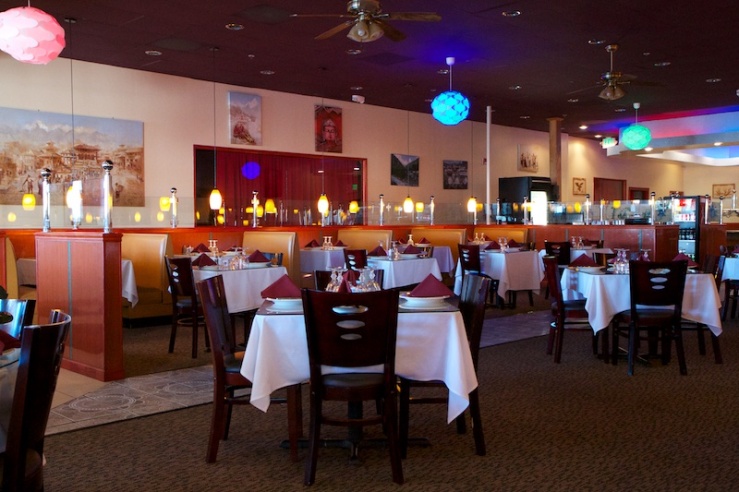 I was joined by my mom and we headed in.  Just inside is a good sized waiting area with a couple comfortable looking seats and a large fountain, which was a little low on water, but was trickling.  Another doorway in and we were greeted quickly by one of the friendly servers.  The dining room is very large and pretty nice.  There are booths along the outer walls and tables in between.  It goes back quite a ways, but the dining room stops about halfway in.  Past that point is a server station where they get all the drinks, and further back is a large buffet area.  They weren’t doing the buffet for dinner tonight though.  From what we could gather from the signs out front they run it for lunch during the day and on Wednesday only for dinner.  We sat in a booth near the front and were served water as we opened the nicely bound menus.  They have a PDF menu on their website, though for some reason they have not yet updated it with the Roseville location.  I looked at both the Davis and Rancho menus and they seem to be nearly identical.  I noticed that the menu here had a couple additional dessert items, so there may be a few other differences as well. 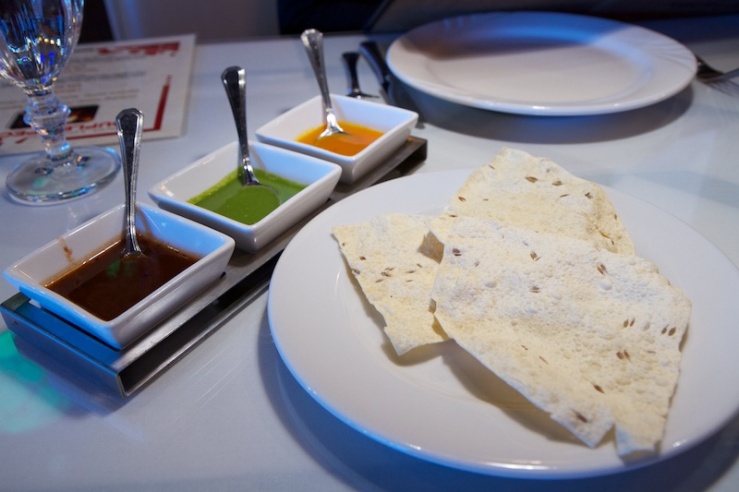 As we looked it over a different server came by to see if we were ready or had any questions.  We needed a few more minutes, but I ordered a mango lassi in the meantime.  An appetizer was served up as we continued to look.  I’ve seen this at a few places now.  It’s a crisp, chip-like thing that’s apparently called papadum (thank you, Google).  Along with it came mango, mint/cilantro and tamarind chutneys.  This was the first time I’ve encountered the mango.  All three of these were delicious on the crunchy papadum, which itself hinted of cumin.  Soon the mango lassi arrived, and it was HUGE.  Biggest one I’ve ever seen by far.  Sadly, it was not quite up to par with just about every other one I’ve had.  It was smooth and creamy, but the flavor which was good seemed somewhat subdued or watered down.  Others are much richer and just little sips yield a ton of rich mango flavor.  I did notice later on while watching the server prepare another that it came from a carton.  Perhaps it’s not made in house at Namaste Nepal, who knows.  The size kind of made up for it, but I would have preferred a smaller, richer lassi.  We decided on our entrees just as the server came over and joked that she wouldn’t be coming back another time.  We placed the order and off she went.

It took 15 minutes from there for our food to be prepared and brought out.  I should note that there were just a few other tables seated while we were there.  It was about the same throughout our time there.  As for staff I only ever saw the two servers, who seemed to be working together on our table and likely the others as well.  We had three things come out at once: butter chicken (roasted boneless chicken, cooked with herbs and spices in a rich creamy tomato sauce), sahi paneer (homemade cheese cooked in butter based rich creamy sauce) and cheese naan.  The naan was hot and fresh.  I thought it was just as good as plain naan.  There wasn’t a whole lot of cheese to it, just enough to notice and go “hey, there’s some cheese in this naan.”  I peeled one apart a bit to see if I could get a photo, but it didn’t look all that different.  So cheese naan: “meh.”  Naan in general: thumbs up.

The sahi paneer was a golden-yellow colored sauce.  Both it and the butter chicken were served with white rice.  A good amount of soft, cubed cheese swam in the thick sauce.  It was very creamy and quite delicious.  The butter chicken had more chicken in it than the sahi paneer had cheese.  They were a bit bigger overall and there seemed to be more pieces.  The chicken was tender and juicy.  Now the sauce, oh man, the sauce!  Wow, the moment I took my first bite of this I knew it was the best thing we had tonight.  It was almost overwhelming how rich and flavorful the tomato-based sauce was.  I thought both dishes were great but this was something special.  We both used the ast of our naan to scoop up the remaining sauce in the dish at the end. 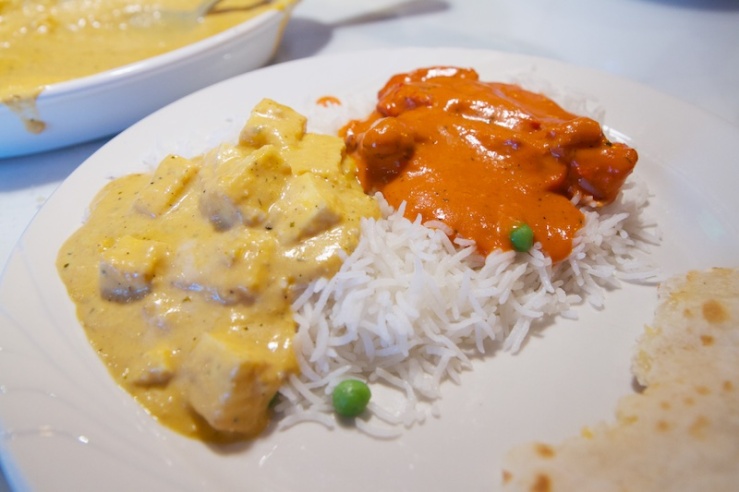 I couldn’t leave without trying one of the desserts I saw, but I was somewhat full, so I opted to take it home.  I ordered the mango mousse cake, which was one of the extra items not on the website’s menu.  After a short trip home I cracked it open and went to town.  I found this to be fairly disappointing.  It was clearly a frozen item to begin with.  It wasn’t quite thawed evenly, so as I worked my way through to the thicker end it got colder and more like a sorbet than mousse.  The flavor was OK.  Nothing really special though. 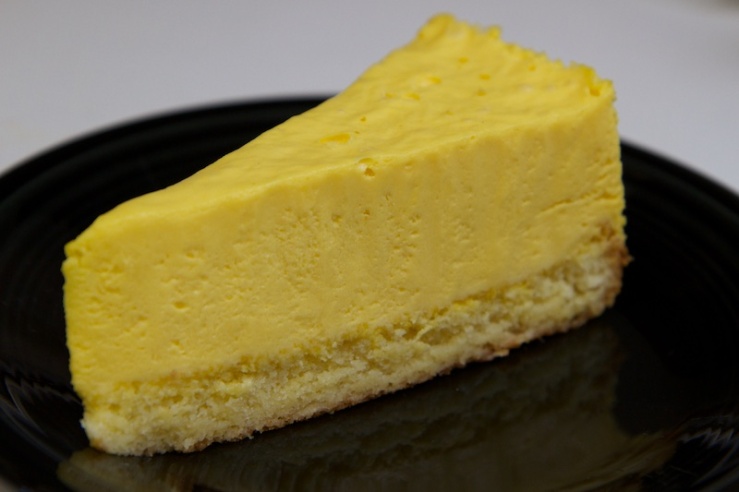 The entrees and the papadum were excellent overall and rival every other Indian restaurant I’ve been to in Roseville for sure.  The mango lassi could definitely use an improvement and I won’t be ordering the mango mousse cake again any time soon.  I don’t often order dessert at indian restaurants anyway though, so I’m not factoring it in very heavily to my final thoughts of Namaste Nepal.  Overall I was very impressed with it, particularly considering this location’s track record.  I know I will be back for the buffet at some point since this is one of the closer Indian joints to me.  I’m glad to have finally tried this place.