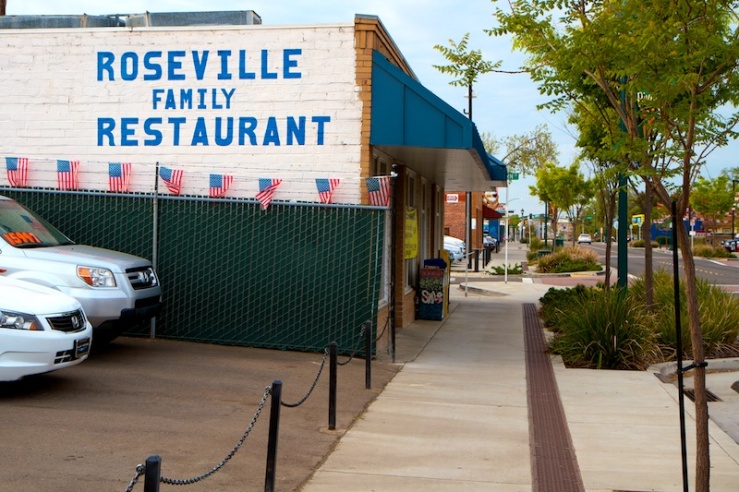 This morning I was up early and decided to go have breakfast.  I decided to go see what Roseville Family Restaurant is all about.  This breakfast & lunch spot is located on Riverside Ave in Old Roseville, nestled within all the used car lots.  It’s one of the places that I’ve long been curious about and inspired to start this blog by.  Along with scattered street parking on Riverside, there are about half a dozen spots just around the corner on Fern St.  I arrived early at about 6:45AM and there were only a couple other customers.  When I walked through the door a man sitting at a table and reading the paper greeted me and told me to have a seat anywhere, then suggested one of the tables around him as he got up, saying it’s nice and warm on this side.  I took one next to the front window and he set the paper he had been reading down on it and headed into the kitchen. 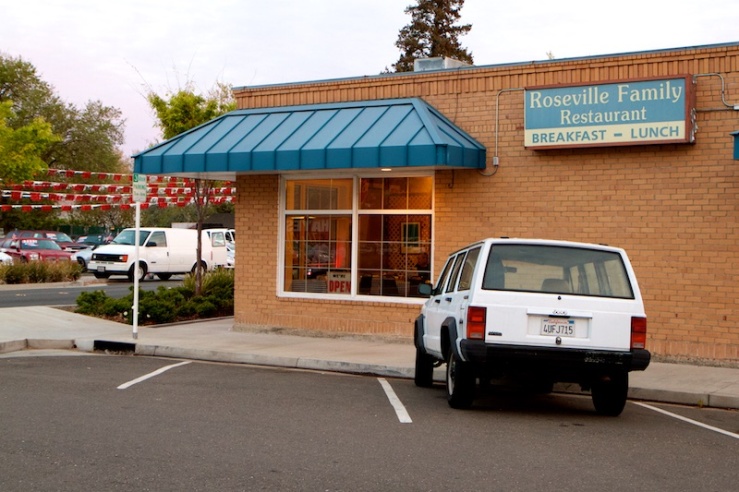 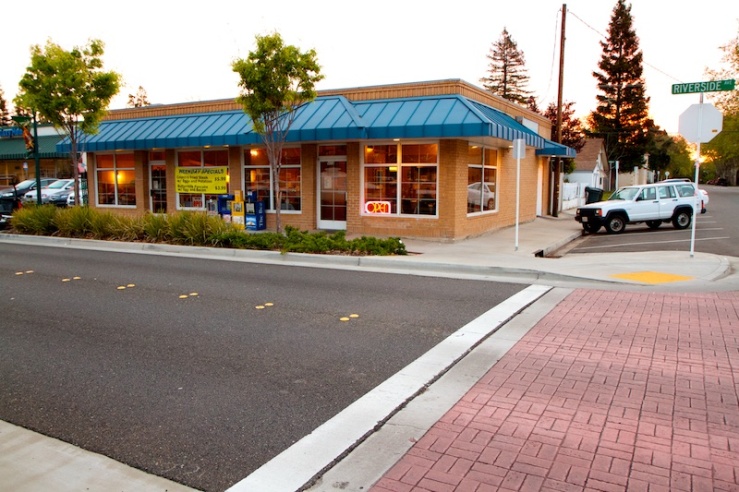 As I sat down the server (his wife?  Guessing they are the owners) asked if I would like coffee as she picked up the 2nd place setting.  I said yes and soon she returned with a pot to fill my cup as well as creamer and a cup of water.  I went over the menu, which was pretty typical.  All the usual things were there in different combos.  There was a pretty good sized list of omelets (random tangent – after debating the spelling omelet vs omelette with my computer, neither look or sound like a real word to me anymore).  Lunch items consist mostly of burgers and sandwiches.  They also have an “Oriental Dishes” section with different types of fried rice (chicken, shrimp, bacon or beef) or chicken/beef/tofu with vegetables over rice.  I picked out Stack’em Up, which is three pancakes, two eggs and four strips of bacon.  The server asked if crispy bacon was ok, which I do like so I said yes. 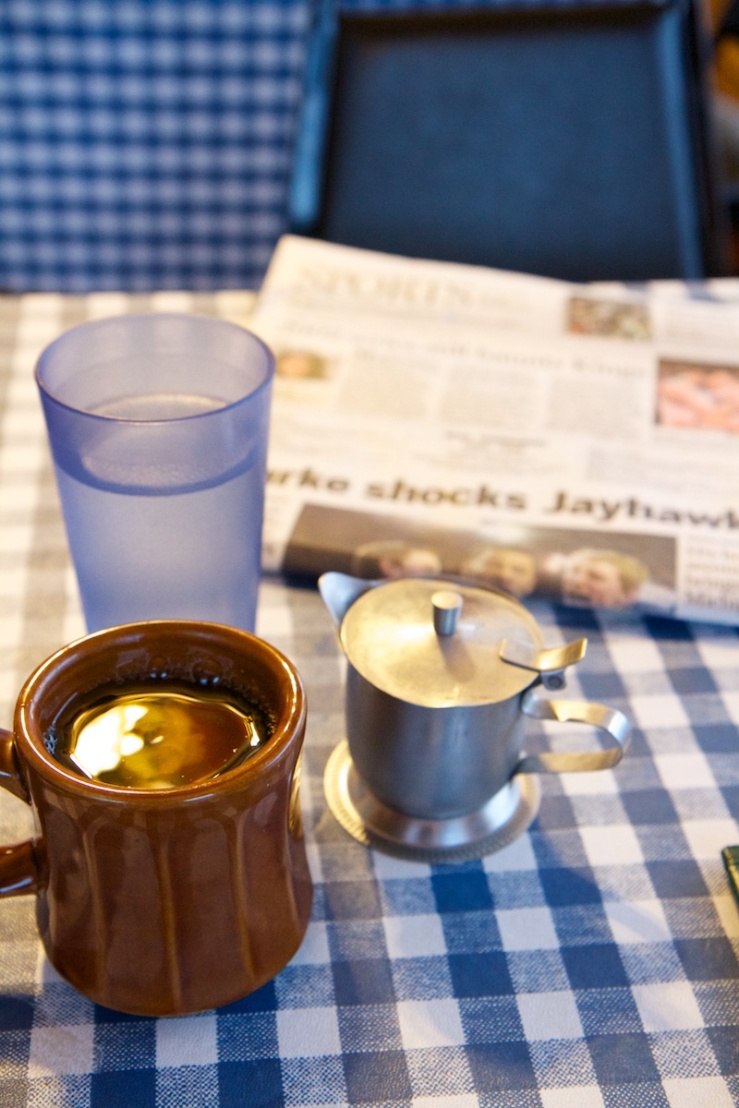 She took my order to the kitchen and I immediately heard sizzling and he got to work at the grill.  This only took about about 5 minutes.  The restaurant was very quiet during this time.  Just after 7AM hit a slow but steady stream of regulars started trickling in.  My pancakes, eggs and bacon arrived and she grabbed a condiment-style bottle of syrup from another table for me, then went off to attend to the new arrivals.  A lot of these people must come every week because some of them didn’t say a thing, beyond a greeting, and had their drinks and food already going. 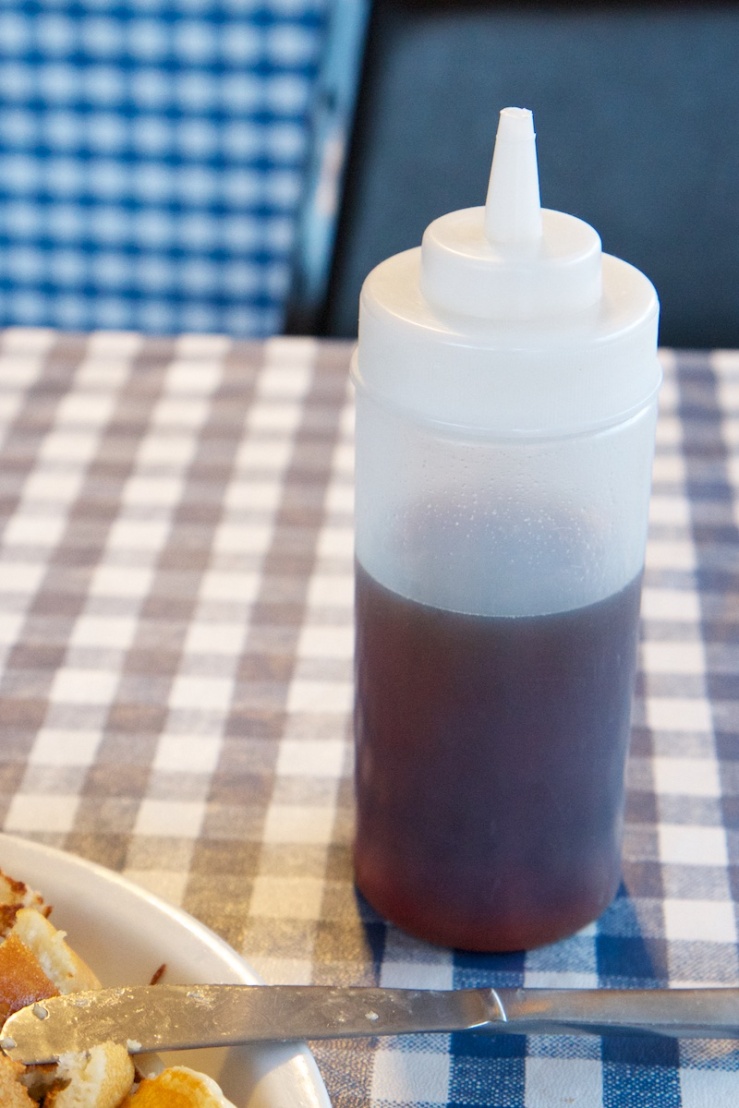 My pancakes were fresh and very hot with a big ball of butter slowly melting into a puddle on top.  The bacon certainly was crispy.  Maybe a little too crispy actually, even for me.  They gave me an extra piece though, so that was nice.  The eggs were prepared over medium as requested.  I added a bit of pepper to these and they were OK, nothing noteworthy though.  I cut up the pancakes and added syrup as I went so that it wouldn’t have time to soak in.  I actually really like the bottle, it worked great for adding exactly the right amount of syrup to exactly the spot you want it.  Maybe this should be a thing instead of those tiny syrup ramekins/pitchers.  On the other hand it probably wouldn’t work for hot syrup like some places serve.  I really enjoyed these pancakes.  They were perfectly fluffy and not overly sweet.  I’m typically a waffle guy because I like the texture, but if the flavor is great then I’ll take a pancake too, and these were great! 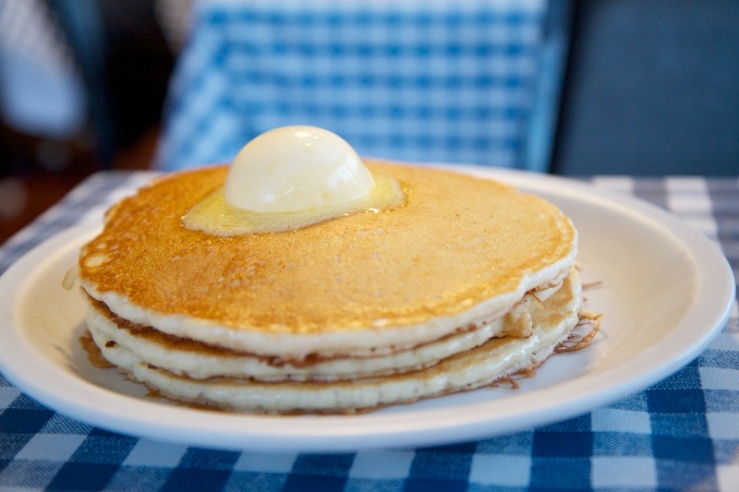 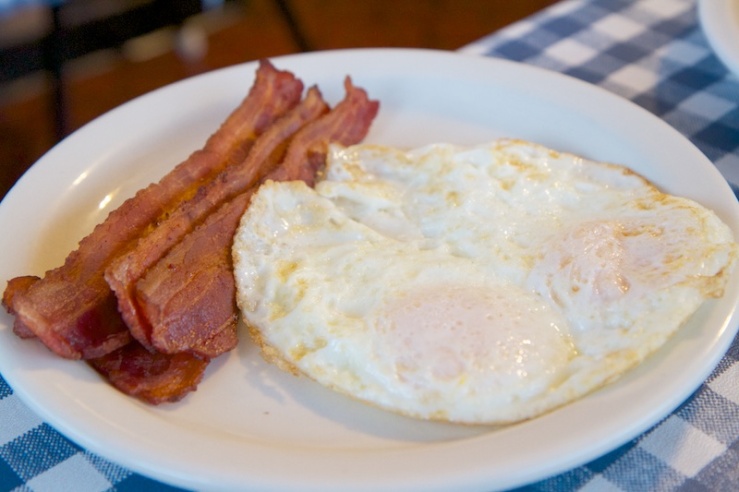 My breakfast came to just over $9 which seemed fair, I left stuffed and almost finished my pancakes.  Both of the people working very very nice and the server came by to check on my coffee frequently, even after she started to get busy with the newcomers.  It’s a pretty traditional breakfast/lunch joint (with exception of the oriental section).  I imagine it would be a nice place to walk to in the morning if you lived right around there.  While I enjoyed the pancakes, the bacon and eggs could have been better.  Since I don’t do breakfast very often, I think in the future I would probably end up going to Four Sisters or Waffle Barn first.