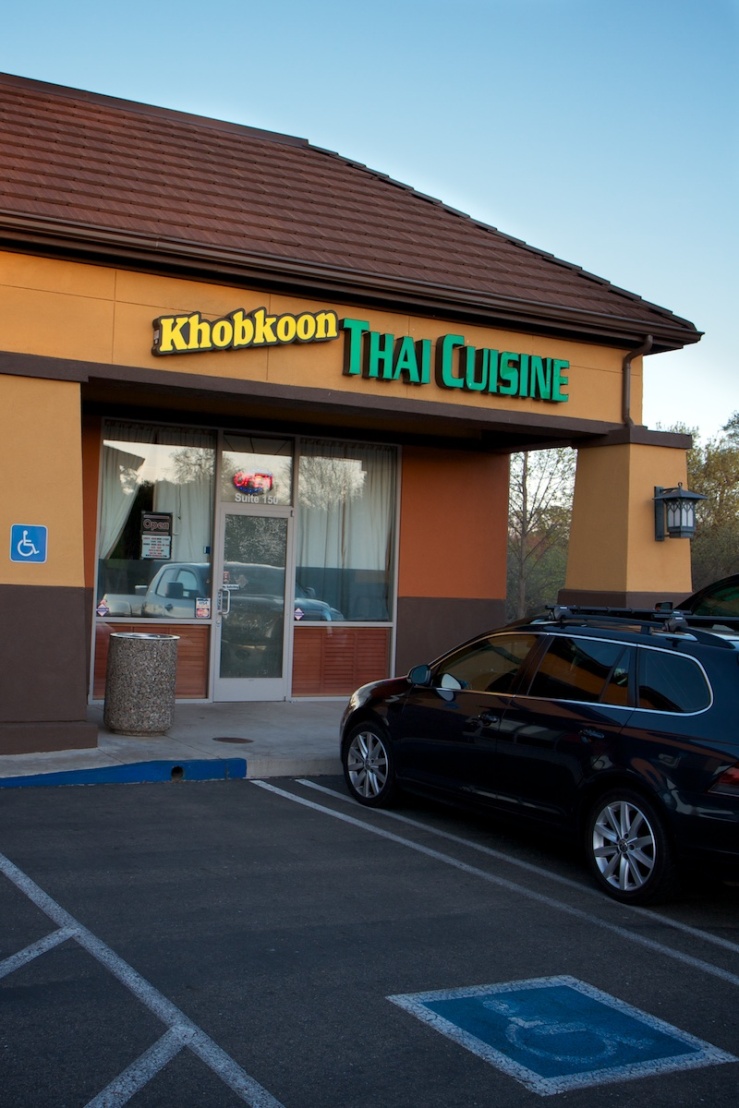 Tonight I discovered that my kitchen had a lot less in it than I realized and so found myself heading into Khobkoon Thai Cusine for dinner.  Khobkoon is located at Foothills and Pleasant Grove in the same shopping center as Campelli’s, Beach Hut, Knucklehead and Sushi Mon.  It’s a pretty small little place, probably about the same size as Khun Suda but laid out differently.  It was about half full when I arrived just after 7PM.  Most of the dining room is a narrow strip down the length of the building on the right.  I try not to point my camera at other customers whenever possible, so tonight this meant no interior photos.  The lighting is both dim and bright at the same time.  What I mean by that is the wood paneled walls (very similar to Ruen Thai, in fact the interior design and decorations are similar as well) seem somewhat dimly lit, but every table is fairly bright from directional lighting in the ceiling.  You’ll see a pretty clear shadow from these lights in my iced tea photos below.

I was seated right about in the middle of the restaurant.  On my side the tables each have 4 chairs.  On the other, the tables have two chairs on one side and bench seating along the entire wall.  I was left to look at the menu for a while.  They seem to have all the usual stuff but nothing too fancy, like the special curries (mango, duck, pumpkin, avocado), that some of the other Thai joints have.  Actually it took me a little while to even find their standard red/yellow/green curry.  Instead of having a dedicated “Curry” section in the menu, these are listed as a single line under A La Carte.  The rest of the menu is divided up into Appetizers, Soup, Beef, Pork, Poultry, BBQ, Seafood, Vegetarian and Noodles.  I quickly picked Pad Se-Ew (stir-fried thread-rice noodle with egg, bell pepper, cabbage, tomatoes, chili, and basil) and Red Curry (curry with vegetables, choice of chicken, beef or pork), both of these with chicken.  I waited for a while, with the menu closed, for what seemed like the only server to come take my order.  There was one or two others helping him by running food out and clearing plates, but he was pretty much covering the whole place on his own otherwise.  When he did stop to get my order he was definitely in a bit of a rush because he nearly took off before I told him my second dish.  I also asked what their spice levels were and he simply responded “medium?”.  I was like, “uh, ok, sure.”  I figured out later by overhearing conversation from the table behind me that the different levels are mild, medium and spicy. 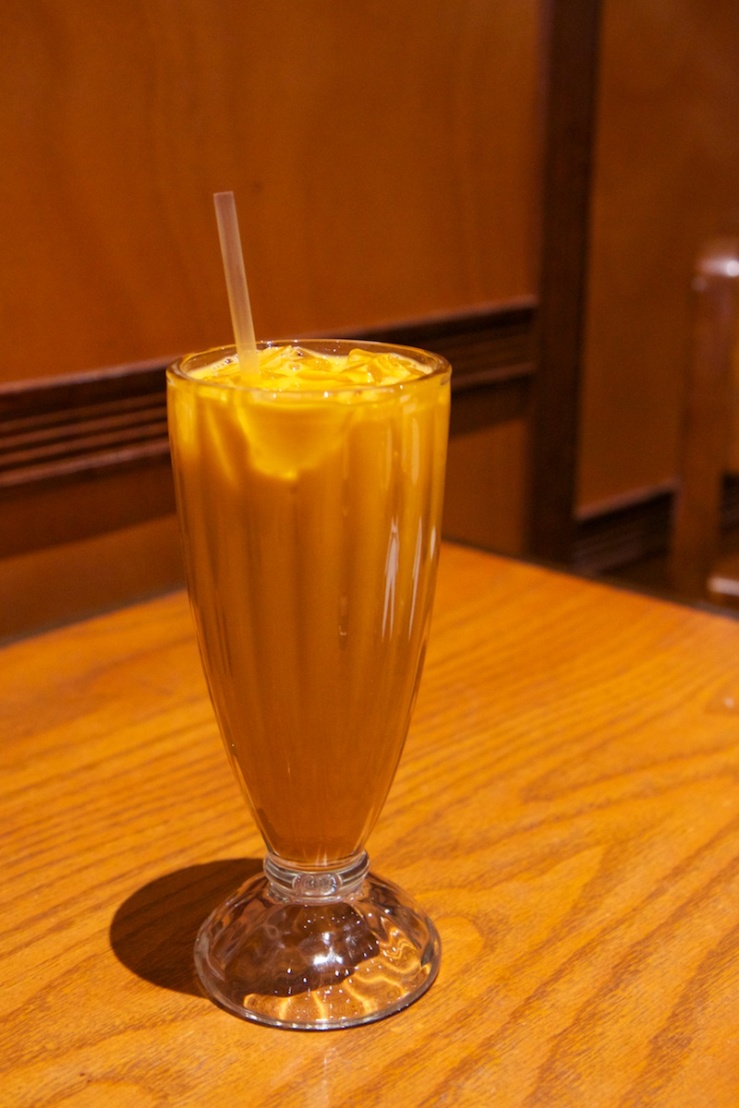 I sipped on iced water for about 5 minutes until my Thai Iced Tea came.  After mixing it up I gave it a try.  The flavor was good.  It did seem to be a bit on the thin side, but this might just be because I had a super smooth and creamy mango lassi from Tandoori Nights earlier in the day.  It was about 15 minutes later when my food finally came out. A huge container of steamed rice, while not even halfway full, had way more rice than I needed, even including leftovers.  The curry was in a long, shallow dish with most of the solid items piled up in the center.  My first impression was that I thought it looked a bit runny, like Papaya Thai Cuisine’s curries.  The Pad Se-Ew was a good sized mound on a big plate.  Both dishes seemed to have lots of chicken. 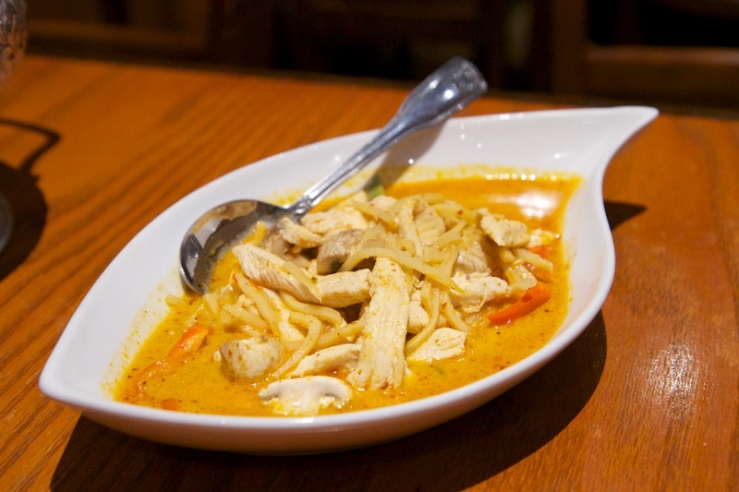 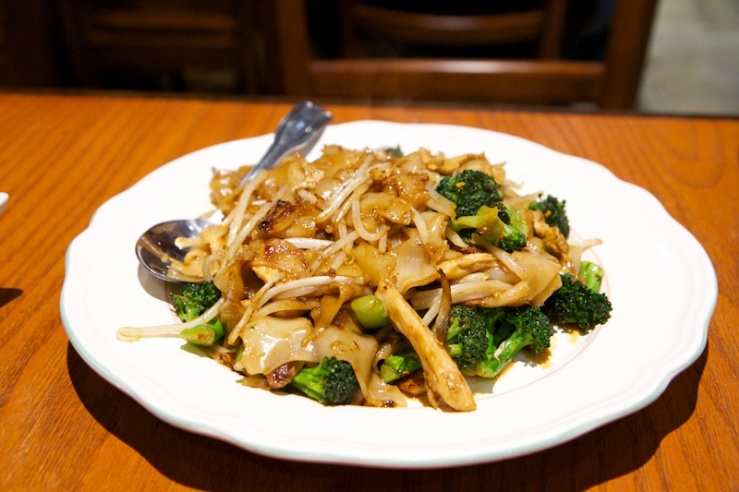 I spooned some red curry over the steamed rice and a serving of noodles.  The serving spoons weren’t much bigger than mine, if they were even different at all.  This made the serving process take a little longer as I had to specifically go back to get some more red curry coconut milk and because the large noodles were quick to slide right off.  I thought the Pad Se-Ew was very good.  The chicken was just a touch on the dry side, but not too bad.  The noodles themselves were excellent, perfectly cooked and coated with a sweet soy sauce.  The broccoli still had a good crisp to it.  Medium was a very good choice for heat.  My nose wasn’t running but I bet the next step up would have been well into that territory.  The curry was not nearly as good as the Pad Se-Ew.  The chicken was about the same, a bit dry.  The main issue with the dish was that it was almost completely devoid of flavor.  I was very disappointed with it.  I didn’t even get any spice from it either.  I may as well have been eating plain chicken and rice.

Pricing seemed about the same as most Thai places.  My bill came to about $22, which isn’t bad at all if you factor in leftovers.  I feel like I did a lot of waiting around here.  Waiting, menu closed, for my order to be taken, waiting a relatively long time for my food, waiting afterwards for my check to come, etc.  I had kind of wanted one more iced tea but he never stopped to check on me between my food arriving and getting the check.  These things coupled with the red curry leave me not really wanting to come back.  The pad se-ew was the one really excellent thing here, but we’ve got plenty of other great Thai restaurants in town that have it along with fantastic curries.

One thought on “#124: Khobkoon Thai Cuisine”