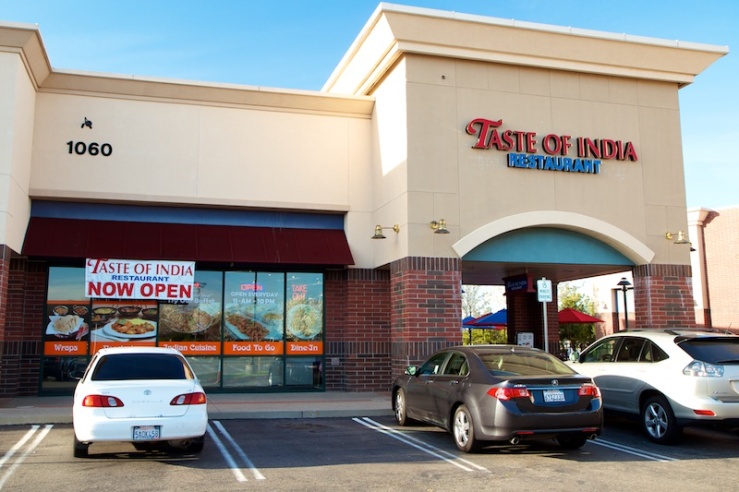 Tonight for dinner I was joined by my mom for Indian food at Taste of India.  They opened late last year in the Safeway shopping center at Pleasant Grove and Roseville Parkway.  I had a $30 Amazon Local deal burning a hole in my wallet and I was hungry for something tasty.  We arrived at about 5:30PM to an empty restaurant and were greeted by a friendly woman and seated by a window.

Just a couple weeks ago I had stopped here one night on a whim and had their buffet.  Everything I had was very good though their buffet table is somewhat smaller than Mehfil or Bombay Bistro which limited the selection a bit.  The place seems fairly large, and even larger this time since it was still light out and one side of the dining room is all windows.  The previous time I had arrived just as a belly dancer was finishing up her routine for a half-dozen patrons.  This night there was no one but the two or three staff, and later a couple guys that showed up to put a big poster of the Taj Mahal up.  We were the only customers the whole time we were there.

We looked over the menu, which seemed pretty standard to the other Indian restaurants I’ve been to so far.  Curry, biryani, various tandoor-cooked meats and of course several types of naan.  We immediately chose the chicken tikka masala (boneless white meat chicken cooked in creamy butter sauce with fresh and fragrant spices) as it’s hard to go wrong there.  We pondered the tandoori shrimp (jumbo shrimp marinated and cooked on skewers in a tandoor oven) but ultimately decided against it as most of the tadoori things we’ve tried so far have often been overcooked/dry.  Eventually I’ll give something from the tandoor another shot, but not tonight.  At some point earlier today I had gone looking for the Taste of India website, found some other restaurant by mistake and had mushrooms on the brain after seeing a mushroom based dish on their front page.  This led me to the lamb mushroom curry (tender lamb cooked with mushrooms), which I ordered.  We picked the plain naan from their options of potato, onion, chicken, or garlic.  Finally, we wanted to try a salad, of which they basically have two to choose from.  One is a mixed green salad (lettuce, tomatoes & cucumber with tangy, homemade dressing) and the other is a cucumber salad (finely chopped cucumbers and tomatoes in our very own sauce).  I’m not huge on cucumbers so we went with the mixed green.

I also ordered a mango lassi which, judging by the blender sound I heard from the kitchen right before it came out, they make fresh to order.  It was quite cold and very delicious.  I’ve yet to have one of these anywhere that was not fantastic.  I often stop by Tandoori Nights to grab one of their ready to go ones from the self serve cooler when I’m out and about.  The salad arrived at about the same time.  Even though the description had cucumbers as one of the three ingredients listed I was still surprised by the amount of them and how big they were sliced.  There may very well have been close to, if not, a whole cucumber there.  I manned up and started crunching away on the huge chunks.  The tomatoes were also fairly large slices which, as tomatoes do, dominated the bite they were in.  The dressing was the most interesting thing.  It was creamy, sweet with a little tang to it and with waves of cumin that were not present in every bite.  It was very unique, and I kind of liked it.  Had this been a lot more lettuce I probably would have liked it a lot more.  Cucumbers are just so…boring 😉

We had just about finished the salad when our two entrees were brought out.  A large plate of basmati rice accompanied the two smallish metal bowls.  The chicken tikka masala looked to be mostly sauce, though there was actually quite a bit of chicken hiding under the surface.  I spooned some chicken up over rice and then realized that it would take a while to get the amount of sauce I wanted like that.  I’m not sure if she warned me about the hot bowl, if so I wasn’t paying attention.  I nearly dropped the whole thing after picking it up to try and pour some of the creamy orange colored sauce over the chicken and rice.  I repositioned to hold it around the rim and finished the maneuver.  The lamb mushroom curry was a bit thicker and easier to spoon out onto my plate.  Our naan was glistening with a light coating of butter and was crisp and fresh from the tandoor. 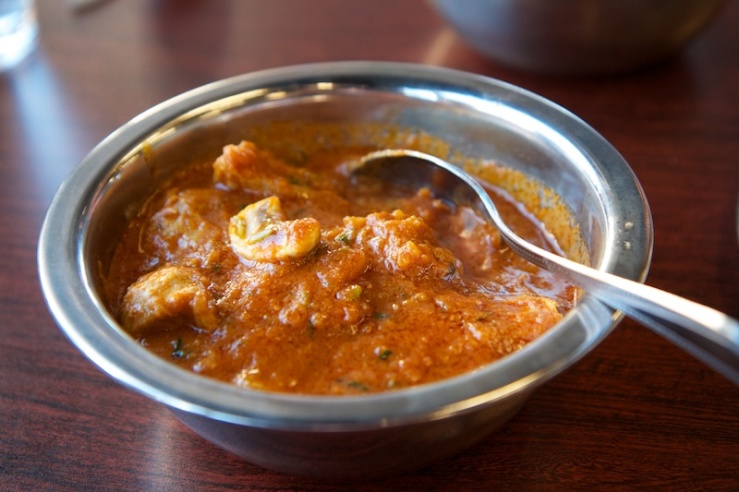 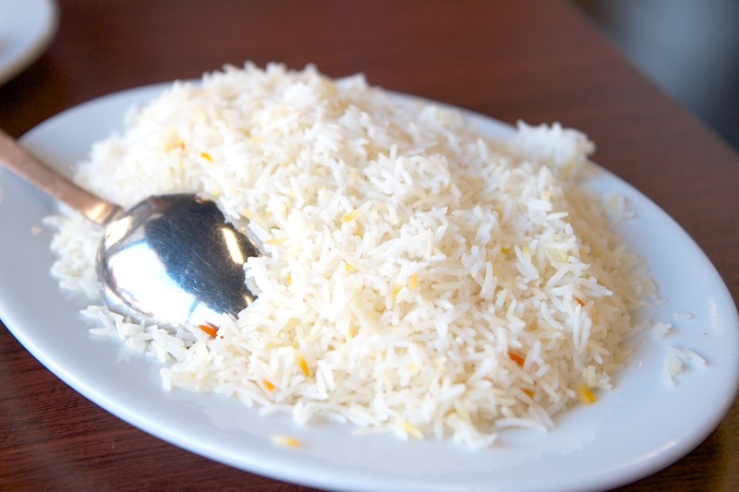 The lamb mushroom was quite good.  it had what seemed to be a somewhat tomato-based sauce with very fragrant and flavorful spices that I’m not even going to begin to try and identify.  The lamb was tender.  Not that there was a lack of mushrooms in this dish, but I kind of hoped it would be a lot heavier with them.  It was fine though, I just love me some mushrooms.  The chicken tikka masala was absolutely wonderful.  Rich, creamy and full of flavor with lots of super tender white meat.  I did a lot of dipping my naan in the excess sauce to get more of it and wiped my plate clean with the last piece.  This was the best part for sure. 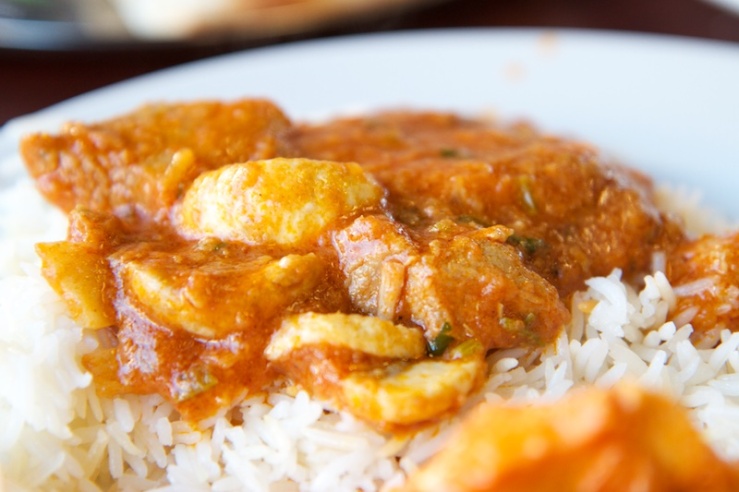 The price was pretty much the same as I expect from an Indian restaurant in the area.  We spent about $37 after tax for everything and I left with enough for a good sized lunch tomorrow.  I felt like the dinner buffet price was a bit high, especially with the smaller selection.  I’m pretty sure it was higher than Mehfil though I don’t recall what either charge, off the top of my head, only that it seemed like a lot when I got the bill.  Overall I was generally happy.  The lamb curry and bread were good, the chicken tikka masala and mango lassi fantastic and the salad decent.  I think I prefer Mehfil and Bombay to Taste of India by a little bit, mostly just due to the larger buffet selection though.