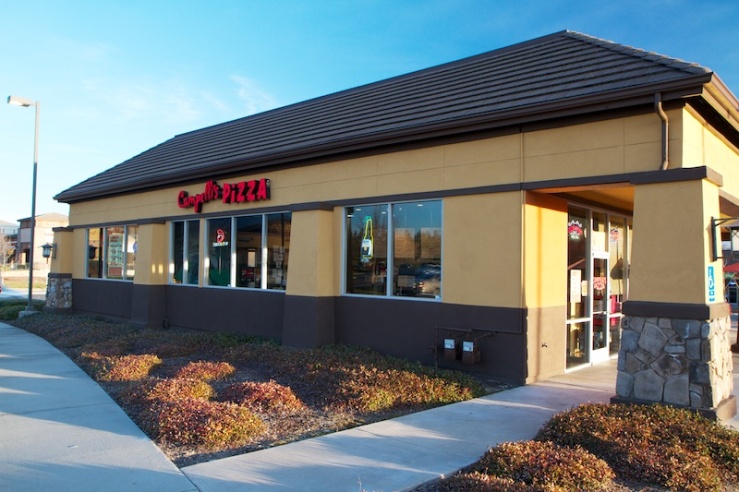 Tonight I went to dinner at Campelli’s Pizza on Foothills at Pleasant Grove.  I stopped in at about 5:15PM and was the only customer.  A couple came in and a delivery went out while I was there but it was otherwise pretty slow.  The dining room was a bit larger than I had expected.  It’s all against one wall as the space is long and somewhat narrow, mostly towards the back.  The kitchen is in full view so you can see your pizza as it’s made and put in the oven. 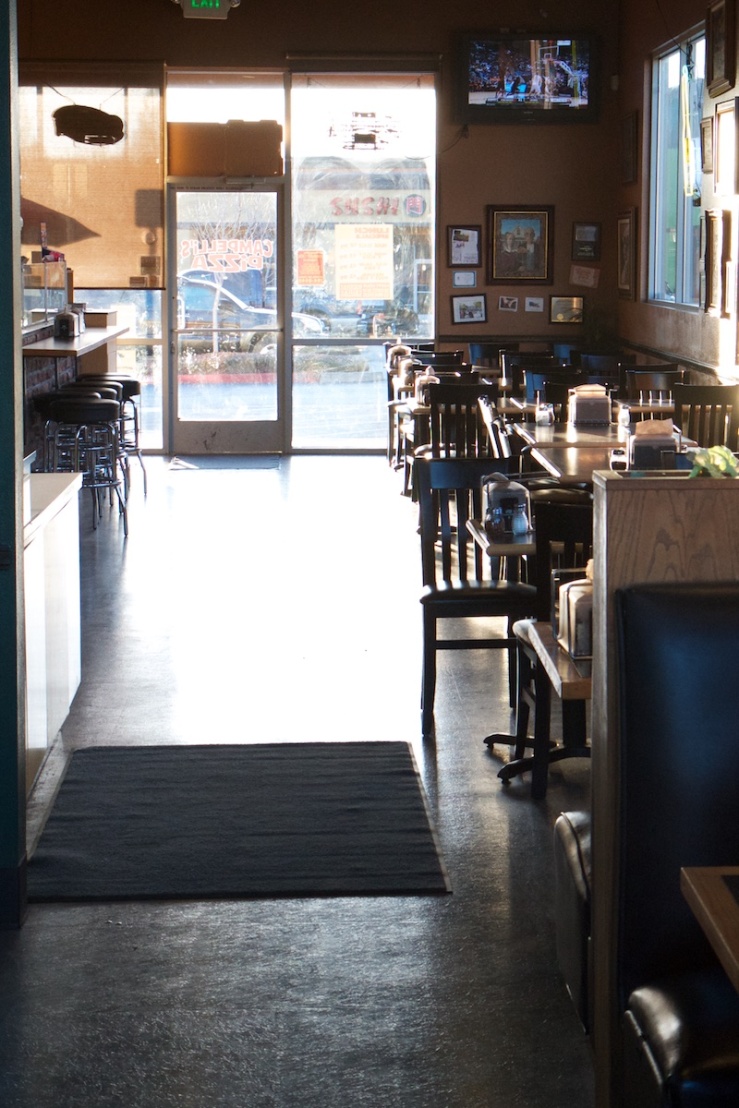 I was greeted immediately by the two employees waiting for customers.  I scanned the menu pretty quickly and decided on a medium half and half pizza.  You get a choice of their original hand-tossed or thin and crispy crusts.  I asked and was told that the hand-tossed is fairly thick.  Going with the thin, for one half I picked Isabella’s Garlic Ranch (garlic ranch sauce with herb chicken, bacon, red onion, mushroom, garlic & basil) and Riva Hawaiian for the other (Dole pineapple, smoked ham and crispy bacon).  I asked for the Hawaiian side to also be on garlic ranch sauce.  They had 4 beers on tap, Bud Light, Shock Top, a Campelli’s branded pale ale and I can’t recall what the last one was, maybe Sierra Nevada.  I got a pint of Shock Top.

I grabbed a table and my Shock Top was brought out to me immediately.  It was extremely cold.  So much so that there was a bit of slush formed at the top.  Quite refreshing.  The overall volume in Campelli’s was slightly high just due to the ovens and the soda fountain ice machine.  Despite that I was able to hear the 40ish  inch TV at the far end on the room.  There was another on the opposite wall behind me.  It took exactly 15 minutes for my pizza to be made, cooked and brought out.  My first impression was that it looked a bit light on toppings.  I think this was due to the bare space between the two halves.  I don’t think I’ve ever seen a pizza made like that, and I never shied away from putting ingredients close together on half and halves when I worked at Round Table.

The thin crust was very much exactly as advertised, thin and crispy.  It was thin enough that you have to support the slice with your other hand unless you folded it a bit.  The underside had a slight crisp and the edges were practically like a cracker (I love it that way).  I hadn’t actually closely looked at the description for the Riva Hawaiian and didn’t know there was bacon on it, so that was a big plus.  I’ve always liked the bacon/pineapple combo.  Thin slices of ham made up the rest of this half.  The balance of ingredients was well done.  I didn’t feel like there was too much or too little in any bite (except perhaps on that center division line).  Though the ham was very thin, it was quite flavorful and held it’s own with the bacon and the sweet and juicy pineapple.  All this on top of the creamy garlic ranch sauce was fantastic.  All the flavors seemed to melt together into something smooth and wonderful.  Isabella’s Garlic Ranch was more on the savory side without pineapple to sweeten it up.  The herb chicken was decent, though I think it could have been a bit juicier.  I didn’t actually recall mushrooms being on it until I looked back at my photo just now, so it definitely could have used some more of those, or at least thicker, more substantial slices.  The garlic was just about right.  Enough to taste in each bite but not overpowering. 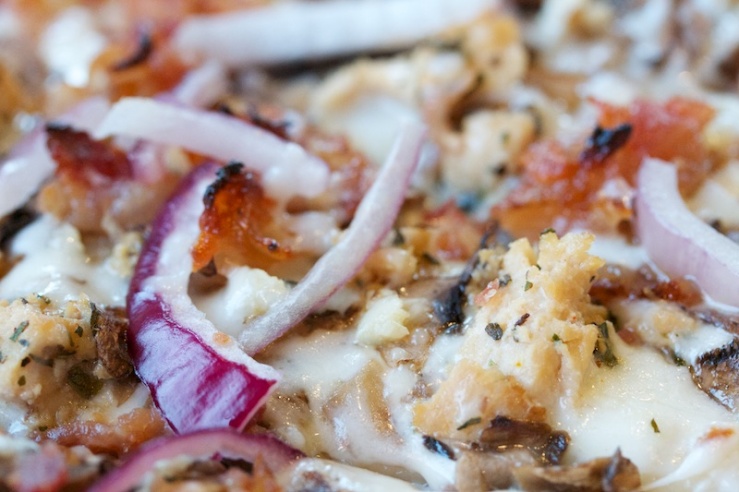 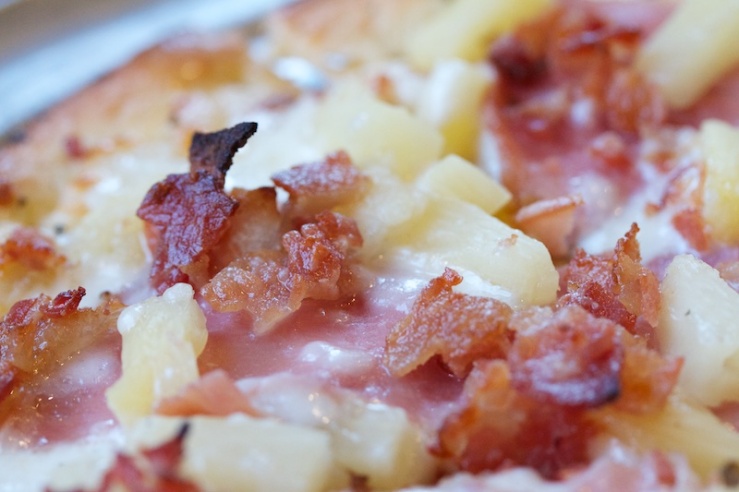 I thought I’d take half of the pizza home for leftovers, but with such a thin crust I nearly ate the entire thing without feeling too stuffed.  I thought the Isabella’s Garlic Ranch was OK, but I really loved the Riva Hawaiian and kind of wished I had just done the entire thing as that.  I could snack on the thin crust anytime, it was both tasty and wonderfully crunchy.  The service was basic but good, I was checked up on about halfway through my meal and thanked as I headed out.  I could see myself returning at some point.  We seem to have a lot of take out / delivery only pizza joints, so it’s nice to be able to sit down and have a beer in one.