Whenever I see a new restaurant that serves a cuisine that I’ve never tried before I get a little excited.  This happened not long ago when I noticed La Huaca while spending some time at the taproom Final Gravity next door (side note, do you like craft beer?  If so you’ll like Final Gravity).  It’s on Sierra College at Eureka, in the same spot that Swagat Indian Bistro, one of my first posts, used to be.  At the time I popped over to peek inside, look at the menu and ultimately order a dessert to take back over to Final Gravity. 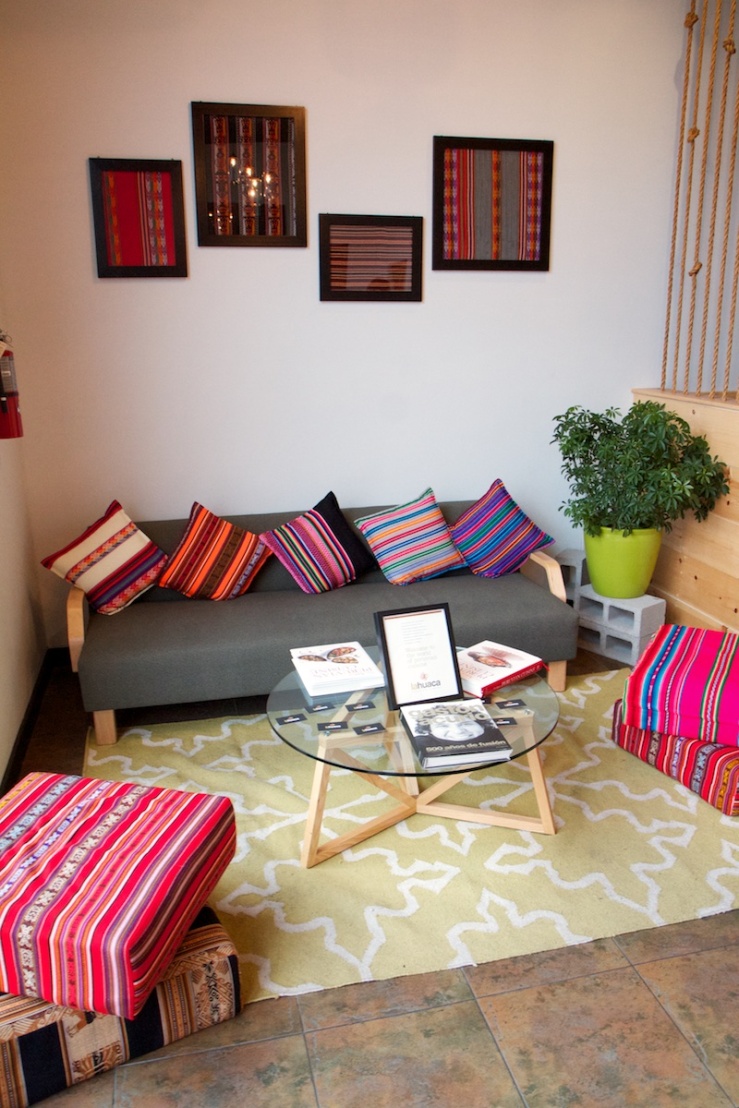 Tonight I picked up my brother and mom and we headed over at about 5PM.  Right in the entrance way there’s a little waiting area to one side and a table/bench on the other.  The table has business cards, coffee table books on Peruvian cuisine/culture and articles about La Huaca.  We were greeted pretty quickly, in less than a minute, and seated immediately.  A handful of other tables were occupied when we first arrived and it was somewhat quiet, though there was music (Peruvian perhaps?) playing.  Our server let us look over the menu for a while before returning to take our orders.  Having no clue whatsoever about Peruvian food, I had spent some time looking at the menu on their website before heading out.  The website is quite nice in that almost every item has a photo, which helped a lot for someone inexperienced with the cuisine like myself.  Everything I know about Peru is from an episode of Anthony Bourdain’s No Reservations, though he did a lot more trekking through the jungle and ancient ruins than eating in this particular episode.  I mostly learned a bit about how ceviche is made and that it is apparently the national dish of Peru. 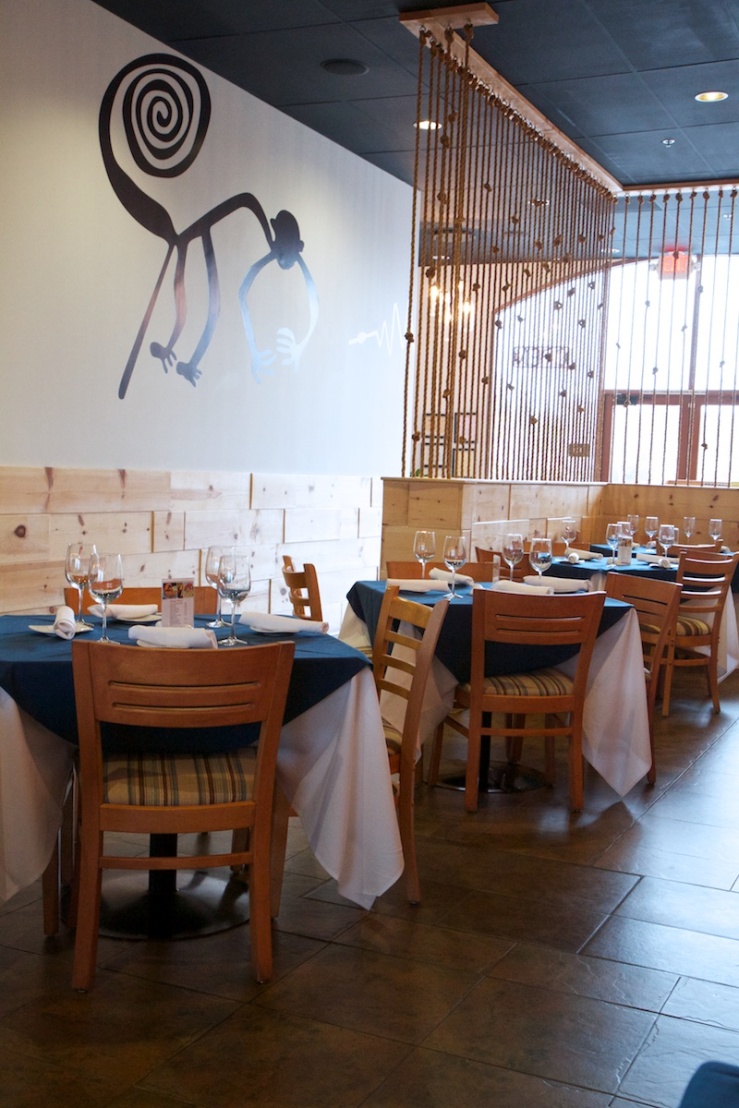 Moving along, the restaurant has seen a pretty major overhaul from when it was Swagat.  It is better lit and brightly colored in many places.  It’s a very nice place to sit in and enjoy.  The ropes that help separate the entryway from the dining area while allowing lots of light through are neat.  We placed the entire order at once, drinks, appetizers and entrees.  I went with a Pibb, my brother ordered a Peruvian beer called Cusquena, and my mom ordered a Cavit Pino Grigio.  It turned out they were out of the wine and my mom made a second choice, however the server returned with another Pino Grigio (which we think he said was from Peru, though I’m not seeing one on their website) which he mentioned they normally only sell as a bottle but he would sell by the glass since they were out of the other.  The beer and wine arrived quickly along with a basket of bread.  I had to remind him about the Pibb about the time the appetizers arrived and he was very apologetic about forgetting it.

The bread were small rolls that were very soft and tasty with a crisp top.  Served with these were three little dishes, butter, cilantro/olive oil and cilantro/olive oil/garlic.  I’m not usually a fan of cilantro but this wasn’t overpowering at all and was in fact really good.  Soon after we had each devoured a roll, two appetizers and a salad were delivered.  My brother ordered the Nikkei Salad (Green mixed salad with Nikkei vinaigrette, crisp peppers, cashews, ho-lan-tao and sesame seeds).  I had a small bite and the dressing was fairly sweet.  He ate just about all of it, and it was a good sized salad.  We ordered the Clásico Ceviche with white fresh fish.  I thought that the ceviches were a little on the pricey side when first looking at the menu, but it turns out that they are quite large.  I shared this with my mom and we kept thinking we were at the end when we would uncover more pieces of fish.  This was really tasty and the fish was plentiful and cut fairly big.  At first my mom wasn’t really into it for reasons she couldn’t quite articulate, but after a bit she warmed up to it a lot and said she could easily order this on it’s own and be very happy.  Served with it were what looked (and tasted) like giant kernels of corn.  We decided that’s probably what they were.  Also on the plate were two large slices of sweet potato, which were delicious.  The other appetizer was the De Vegetales Causa, a dish made with mashed yellow potatoes (Avocado, paprika mayo sauce, mushrooms, asparagus. all topped with cherry tomatoes and quail eggs).  This was served chilled and was fantastic.  The quail egg was delicate and tasty, the asparagus was nice and crisp and the main body was soft and flavorful despite being mostly potatoes and avocado.  I’d love to try some of their other causas.  At this point we knew that we had already ordered too much food.  These servings were looking pretty large overall and I was running out of room. 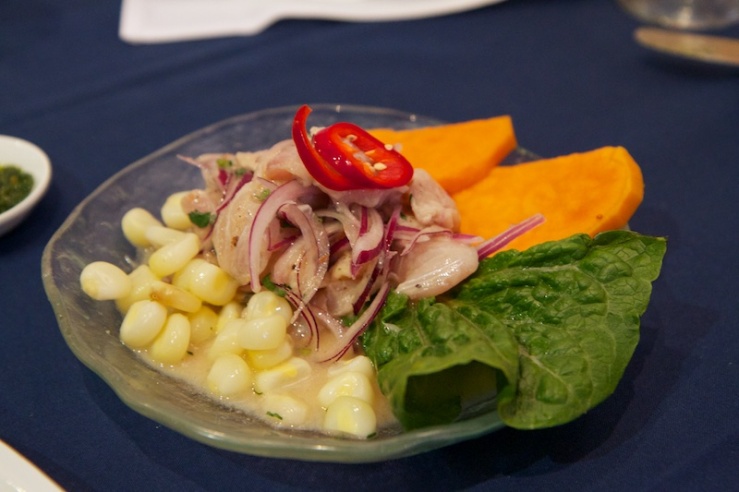 We had been finished with the appetizers for just a couple minutes when the main course came out.  The server cleared the smaller plates and asked if we wanted more bread.  Each with huge dishes of food in front of us, we declined.  My brother had the Arroz del Bosque (Soft and creamy Arborio rice cooked with a variety of mushrooms, green asparagus topped with parmesan cheese).  It was a massive dish of dark brown rice which he said tasted like mushrooms.  My mom had the Camarones Entre Lima y Pisco (Shrimp sautéed in our homemade white wine sauce then tossed in penne pasta and flamed in our homemade Peruvian Pisco liquor and lime sauce. Served with toasted garlic, red crushed pepper, asparagus, cherry tomatoes and parsley).  Also a huge dish, loads of pasta.  She said it was pretty bland and that the wine sauce didn’t have much flavor.  This was the only thing that was ordered that didn’t go over fantastically.

For my entree I chose the Spaghetti a la Crema de Pesto con Churrasco (Thinly cut grilled beef aromatized with parsley and cilantro served with our homemade cream of pesto sauce topped on a bed of spaghetti).  I ordered the beef rare.  This was pretty much mind blowing all around.  The beef was amazingly flavorful and cooked perfectly.  Each bite was full of juices and was very tender.  The spaghetti was incredible.  As I was eating it I was already looking forward to enjoying the rich pesto and pasta again for lunch on Tuesday (maybe even dinner too, considering how much I took home).

In it’s entirety with my mom’s lackluster dish this wasn’t a perfect dinner, but from my perspective it was.  Despite it, even my mom seemed to be really happy with La Huaca and I know I certainly was.  The service was great.  An interesting thing they do when they bring the bill is leave at the table a small tablet where you can enter in any feedback and submit it instantly which I thought was really neat.  I hope that they do well here in this odd location and stick around longer than Swagat, because I intend to come back.