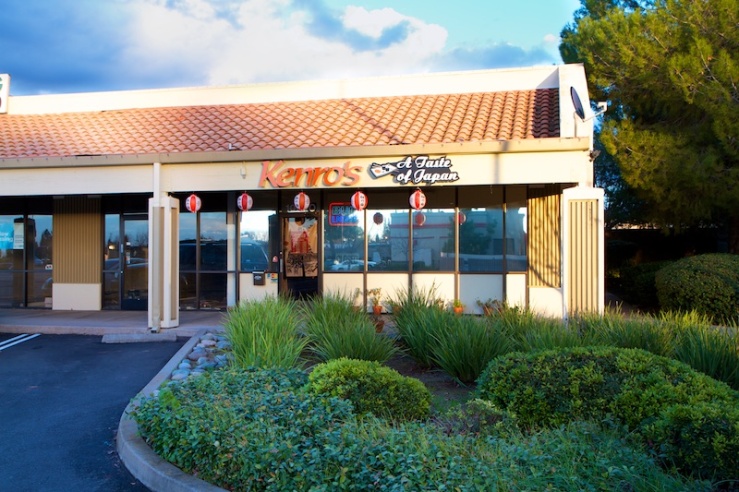 On my way home from work I stopped at Kenro’s A Taste of Japan for an early dinner.  I pulled up at about 4:15PM to find that they were closed.  Upon closer inspection of the sign however, I realized that they close for a couple hours inbetween lunch and dinner.  They would reopen in 15 minutes at 4:30PM so I waited in the car because I was set on sushi (also I had a $30 Sacperks gift cert that is expiring soon, so I was looking forward to using it).

I was, of course, the only customer when I walked in and was greeted by the waitress and Kenro himself who was behind the sushi bar finishing his dinner prep.  The waitress asked if I would like to sit at the bar so I could talk to Ken or a table.  I took a table so I could watch the whole place and get a nice wide angle.  The bar comfortably seats about 10 and there are lots of large tables, many of them pushed together for groups bigger than four.  I had lots of room to spread out at my single table.  The waitress gave me a menu and took my drink order.  They didn’t have Dr Pepper or Pibb so I settled with a Coke.  This came out quickly and was in can form.  I’m always suspicious of restaurants that serve cans and their refill policy, though I did not get to find out what theirs was since this one easily lasted my entire meal. 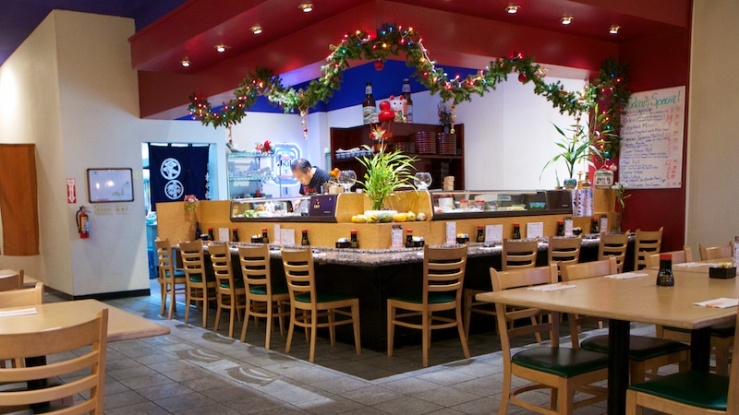 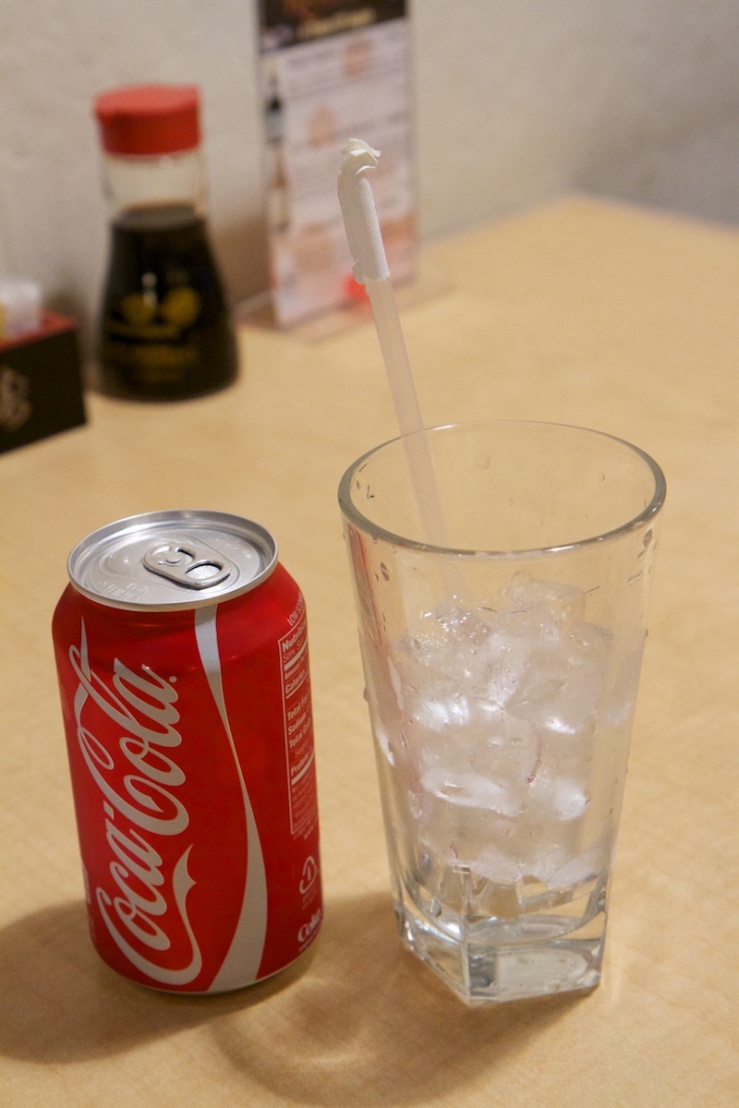 I took quite a while going over the menu as I wanted to maximize the gift cert as best as possible.  She noticed I was taking a while and asked if I had any questions and if it was my first time (not sure if she meant there or with sushi in general, but either way I appreciated it).  I told her no, and that I knew I wanted a bowl of miso soup to start but that I was still looking otherwise.  When she brought the soup out she seemed to want to help me out and asked what I liked.  At that point I said I was going to do the sushi and sashimi combo (6 pcs nigiri & 6 pcs sashimi) but was looking for something else to go with it.  She said she would get that started while I found that and off she went.  Kenro got to work right away.  About this time a small amount of people started to trickle in.  Each of the 4 parties seemed to be regulars, exchanging greetings with both the waitress and Ken. 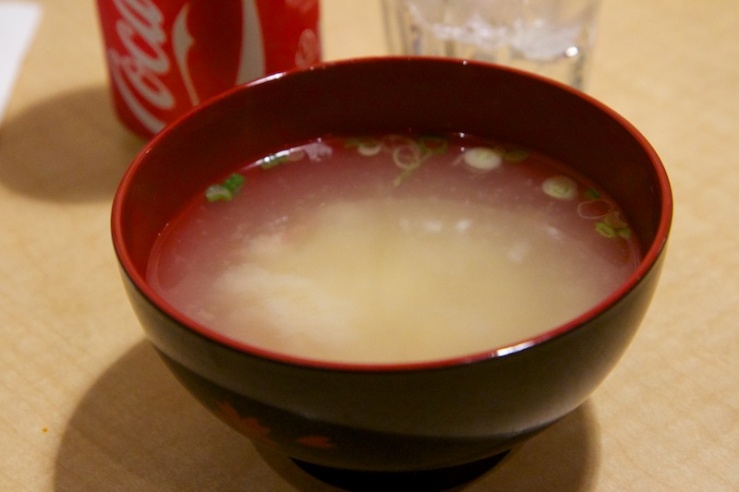 I sipped my miso, which was just about the perfect temperature.  It was pretty mild and soothing with little to no saltiness (something I’ve become hyper-aware of since my most recent visit to Habit Burger Grill where the theme was salt).  While I was still perusing the menu a small salad was delivered and the waitress informed me that my sushi & sashimi combo included it and the miso, which was a nice surprise because the menu didn’t say anything about it.  The salad was cold and crisp with a light amount of  sweet and creamy dressing.  I tore through it pretty quickly.  The next time I saw my waitress I told her I had decided on the agedashi tofu, and with that she took my menu and passed my order onto the kitchen.  I sat back and enjoyed the rest of my miso and watched Ken chatting with his customers at the bar and sharing a toast/cheers of some kind with a beer. 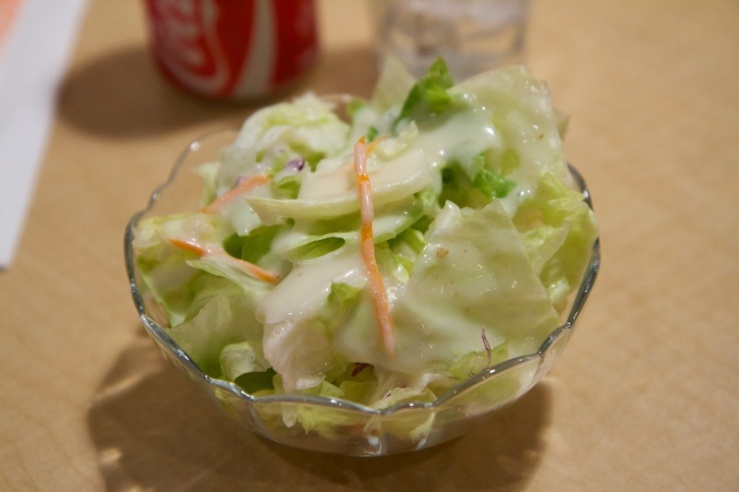 He had been working on my sushi for at least 10 minutes now and when he finished, both it and my agedashi tofu were brought out.  The bowl of lightly battered and fried tofu was quite large, as was each piece.  I ended up cutting many of them in half carefully with my chopsticks in the beginning.  Partially because they were large, but also because they were very, very hot.  I remembered the mouth-burning incident at California Roll & Grill and was determined not to make the same mistake.  A smaller bowl and spoon was brought with it and I used that as a staging area where pieces could cool after being removed from the main bowl.  Overall this was good.  I once had this appetizer, maybe at Mikuni, where they served the tofu and the broth in separate dishes.  I think that’s the best way to do it because then they don’t get soggy and fall apart as easily as you eat. 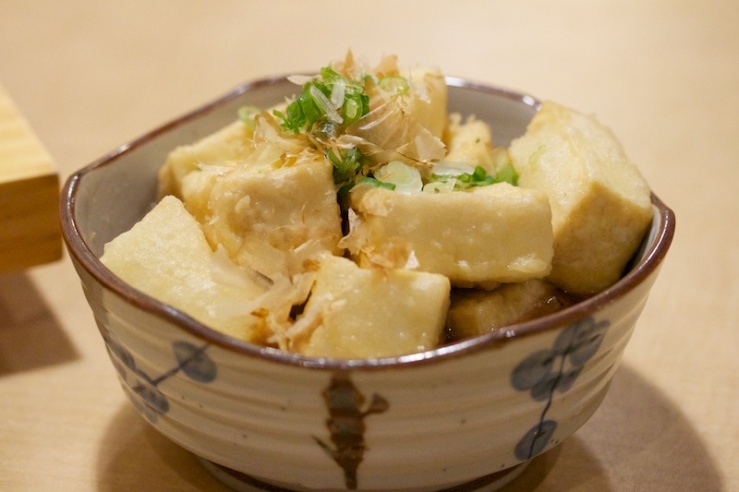 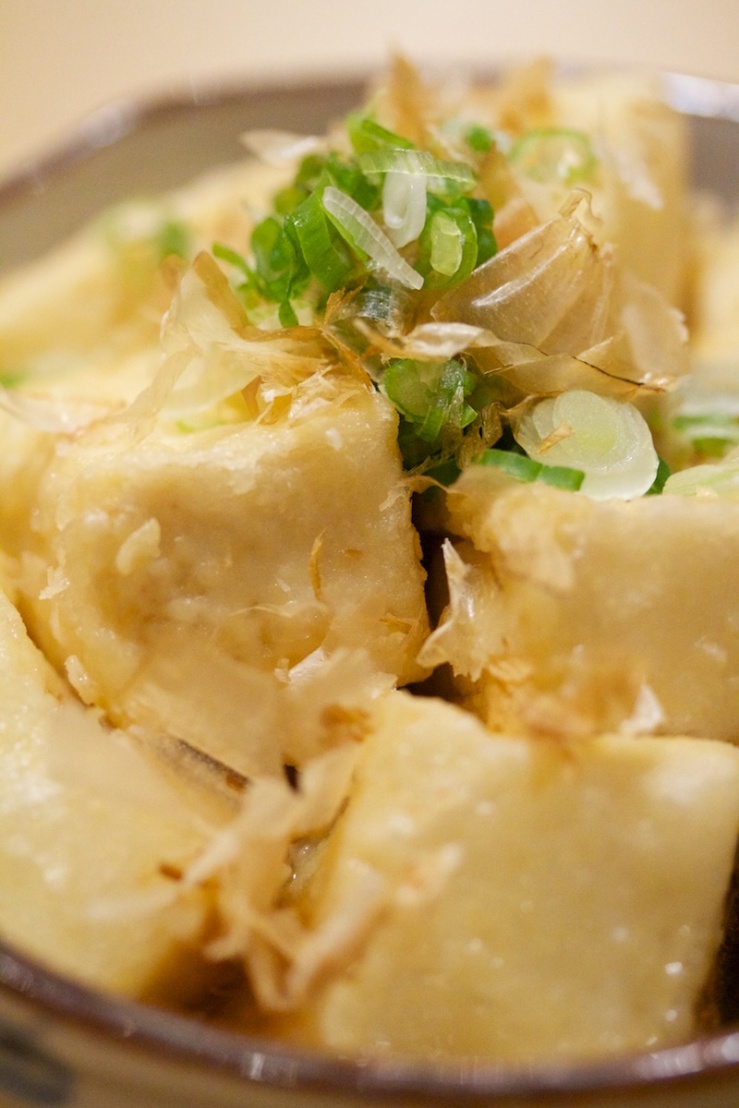 My sushi and sashimi combo was served on a big, wooden platform and was very well presented (as usual with sushi).  This time, however, was the first that I’ve had a sushi sculpture.  The sashimi portion of the combo had been carefully arranged into a flower, which I felt a little bad for dismantling.  The only downside to this neat display was that the sashimi was sliced thinner than I’m used to seeing in plates like this in order to sculpt it.  Each piece was a bit chilled, fresh and delicious though, the small slices practically melting in my mouth.  The nigiri was excellent as well, particularly the rice which held together perfectly and didn’t stick to my fingers.  These were good sized pieces of fish, particularly the sake(salmon).  I saved that one for last, being my favorite, and it was a perfect end to a very good meal. 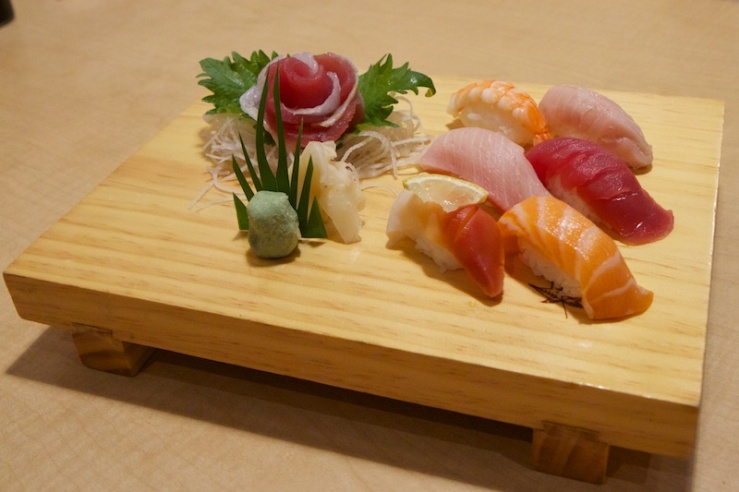 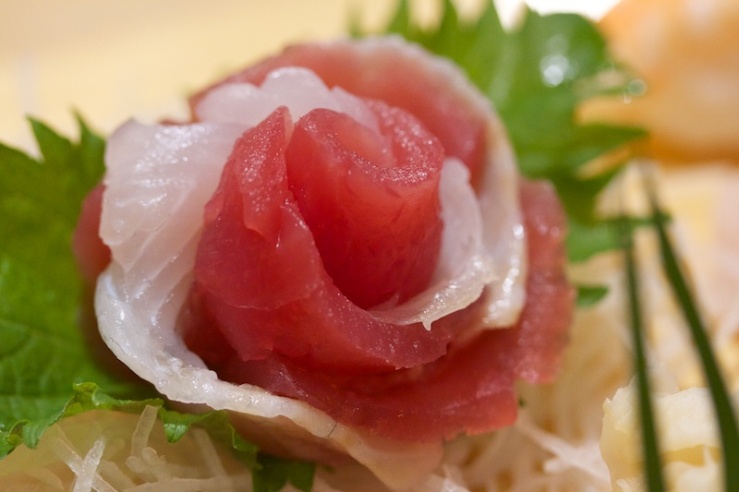 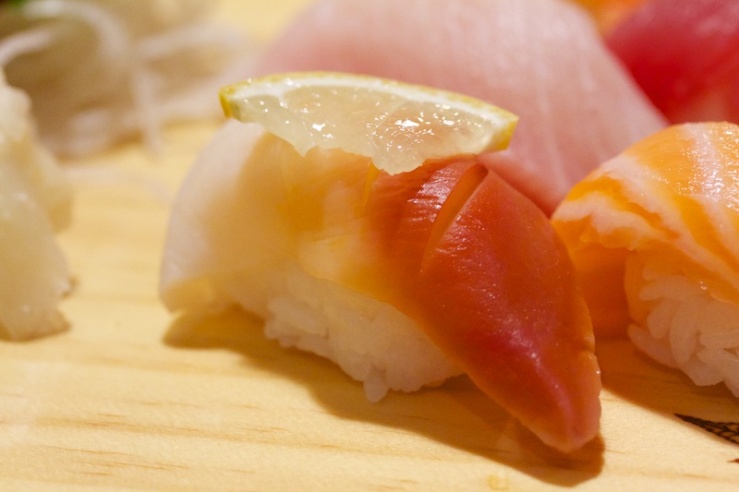 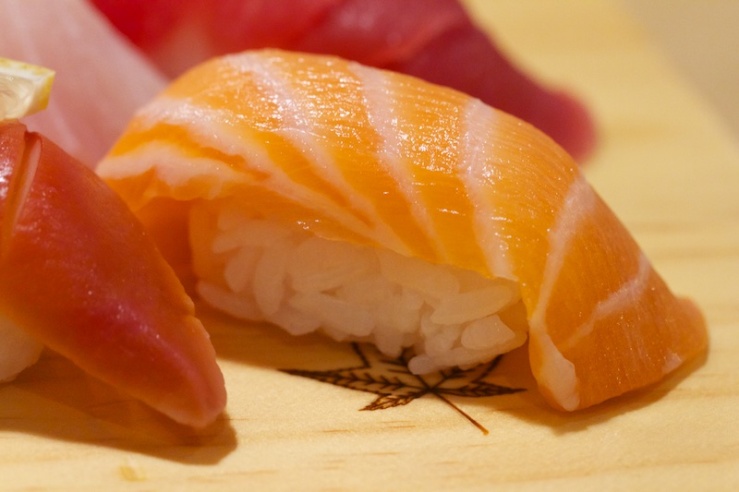 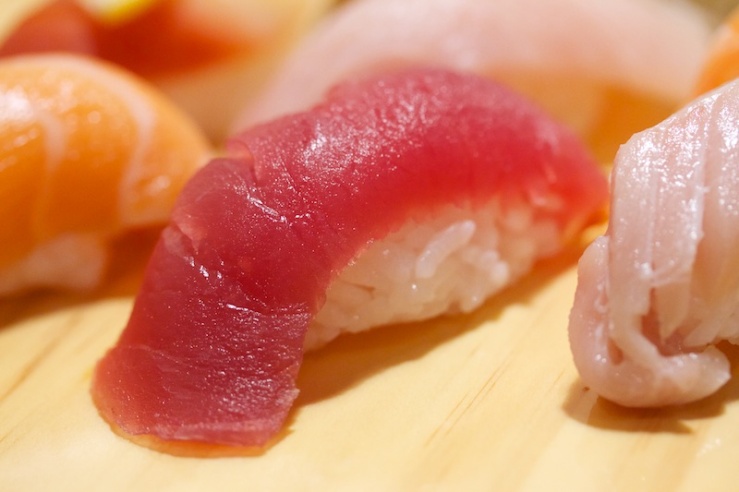 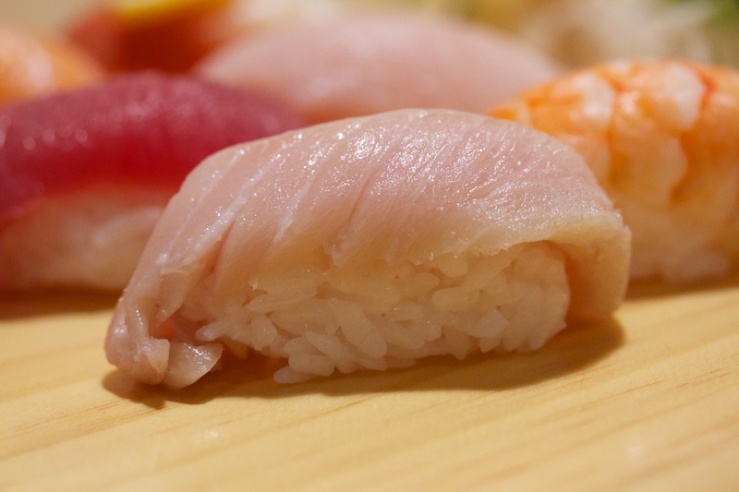 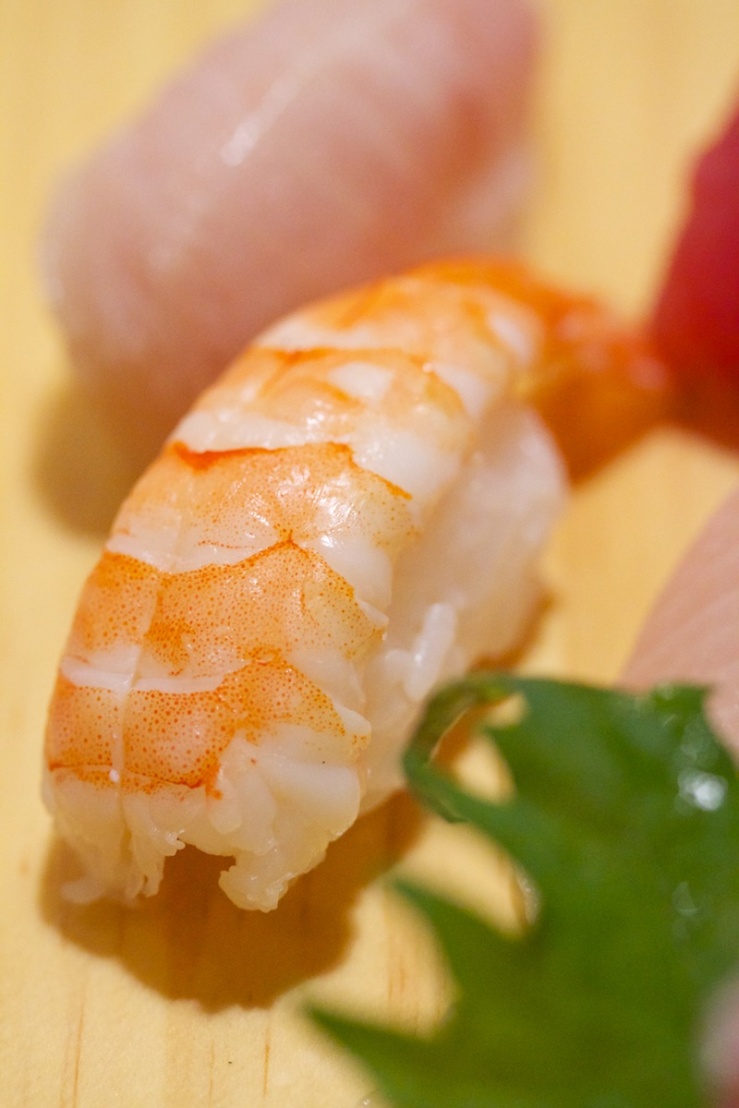 I was very happy with this dinner.  The food was pretty excellent all around, the waitress was friendly and attentive and Kenro seems like a fun guy.  I’ll probably sit at the bar next time I come in.