I set out today to go to Teriyaki Domo but I didn’t realize they are closed on Sundays.  I still had teriyaki on the brain so I headed further down Douglas to I Love Teriyaki, which is supposed to be open 7 days a week.  For some reason they were also closed.  Finally I thought to myself, “screw it, I’m going to Habit.”  In my frustration I went to the Granite Bay location rather than the Roseville one thinking it was on the Roseville side, but alas, I was wrong.  They’re pretty much the same anyway, so I’m pressing on.

This location is at the corner of Sierra College and Douglas next to the new Walmart Neighborhood Market.  Habit is almost exclusively a California chain, originating and highly concentrated in southern California.  They’ve been expanding rapidly in the Sacramento area in the last several years, the most recent location opening in Rancho near my work, which my taste buds are happy about but my scale and wallet are not.  They are primarily known for their charburgers though they have other things to choose from such as grilled chicken, albacore tuna and tri-tip sandwiches and a veggie burger.  I’ve never tried any of these though since the char burger is pretty amazing.

I arrived today a little after 11:30, which is usually around the time the lunch rush starts to pick up.  Business was fairly light but consistent and picked up a bit while I was there.  I hopped in line behind a family and soon I was up to order.  I went with the Double Char with Cheese plus avocado and bacon, minus pickles and tomatoes.  The regular char burger is plenty of food, especially with the avocado and bacon, but the double char makes for a great photo ;).  I also ordered onion rings and a soda. 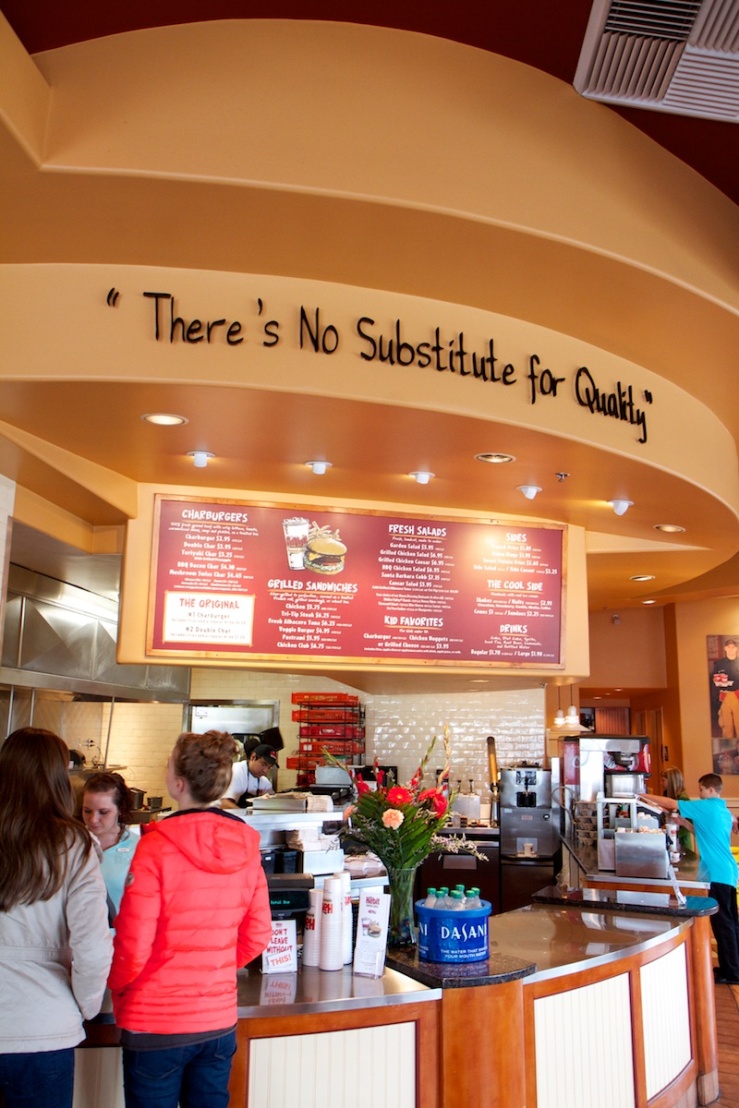 The onion rings here are very good and aren’t much more than the fries, I think just 10¢, making them a very good value.  The fries are, well, a little boring to be honest.  I’ve come to love them over time though.  They’re always consistently crisp, which I appreciate more than great fries that might be crispy one visit and limp the next (like Five Guys).  The service at Habit is on par with In’N’Out and Chick Fil-a.  They’re fast, efficient, friendly and beyond polite.  Even the big, scary Samoan-looking guy.  Some time ago all the Habits started handing out pagers for each order.  It might seem excessive for a fast food type of place but it’s nice because you don’t have names or numbers being yelled out over the often noisy dining rooms. 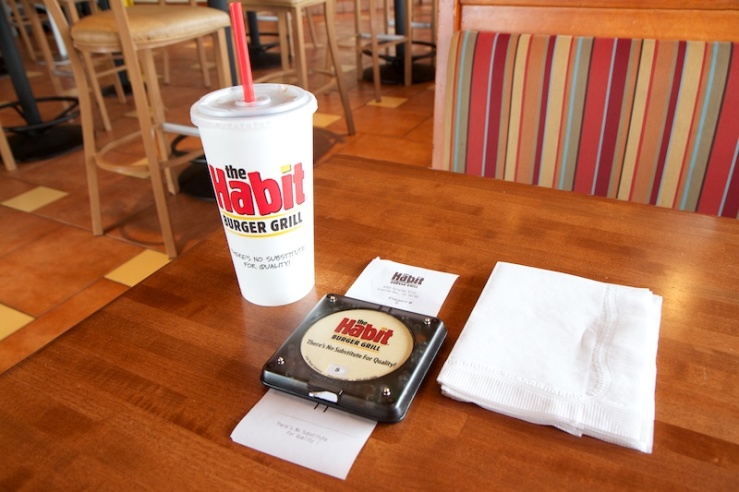 After about 5 minutes my pager lit up and I picked up my food from the counter.  The burger is massive.  The presentation is nice, half wrapped in paper similarly to In’N’Out.  You can see everything from the side, and these toppings are plentiful throughout the entire burger, not just piled up at the front to make it look good.  This was such a loaded burger that just a couple bites in both sides of the bun started to fall apart under the strain.  Big chunks of avocado kept falling out the back as I ate, yet there was still a ton more inside.  Good, crispy bacon was also escaping here and there.  The burger itself is very good, perhaps a bit heavy on the salty side though.  This is something I’ve started to notice recently.  If I had to describe Habit in one word it would be salty.  Adding the bacon is a little overkill because it is also on the salty side.  It’s still a very good burger though. 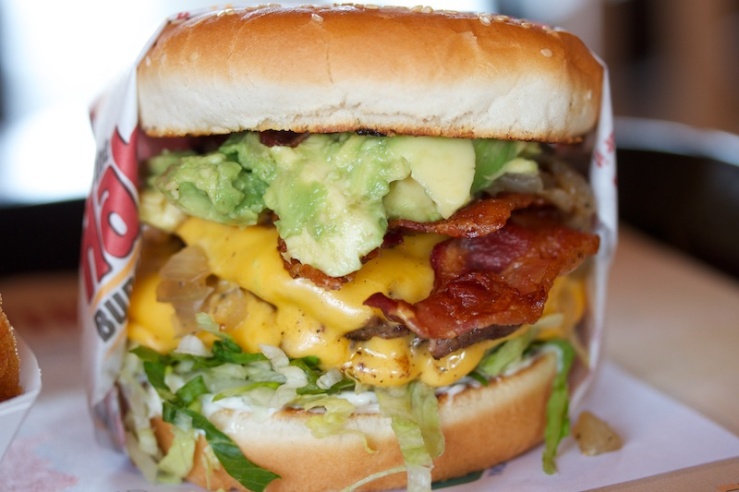 The onion rings are very, very crunchy.  Almost Captain Crunch cut-the-roof-of-your-mouth-open crunchy.  These were tasty as usual, though I noticed as I ate them that even they seemed pretty salty.  With the last ring I could see little grains of salt on it which brought my attention to the tray they were served in.  At the bottom was a ton of extra salt, they must sprinkle it on after they come out of the fryer which I think is a bit much. 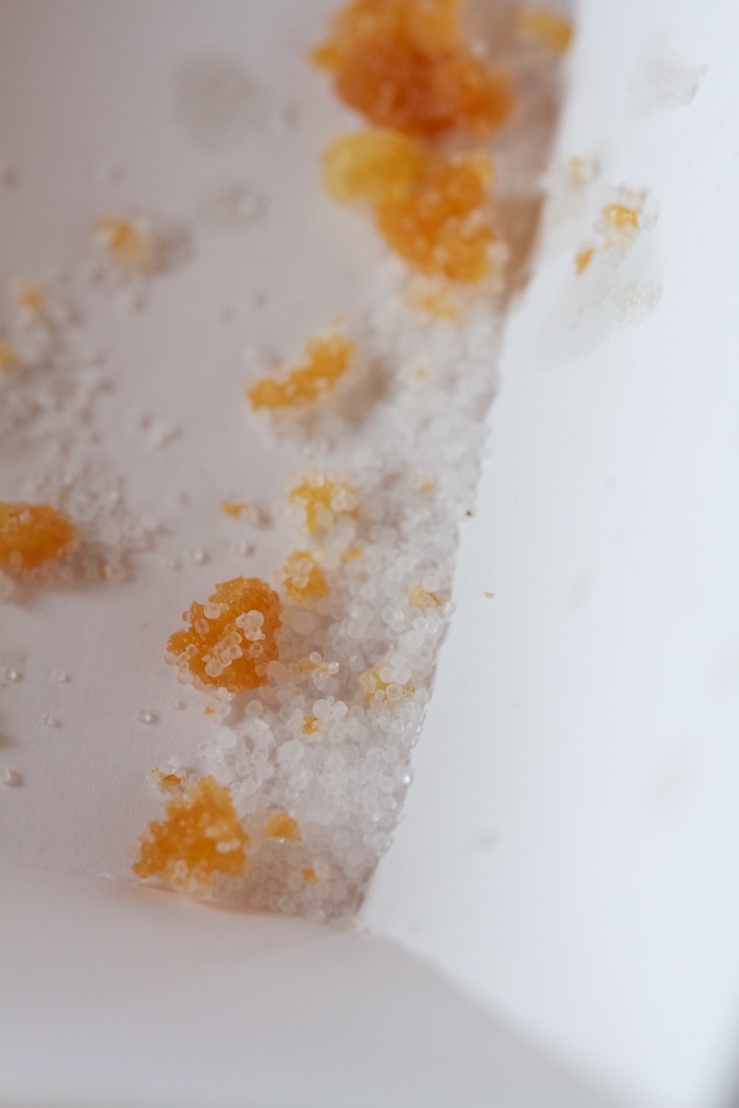 I enjoy the Habit quite a bit, but the more I go the more I notice how salty the burgers (and other things) are.  I think I may very well try one of the chicken sandwiches next time to see what they’re all about.