NOTE: Sabores has moved to a new location down the street, where Giraffe Restaurant had a short run, so some of these photos are no longer accurate. I have updated the map below.

Today for lunch I went to Sabores to use up a groupon that was due to expire soonish.  Sabores is located at Fairway & Pleasant Grove near 65.  For a long time, whenever I saw Sabores on my list I would mistake it for Sbarro and wonder why I didn’t remove it for being a chain.  Clearly I never gave this place much thought, I even had a hard time finding it today and made a couple U-turns near it because I thought it was on the other side of Pleasant Grove.  No help to me was Google Maps which doesn’t even list it.

Obviously I found it and I headed in a little after 11AM.  There were just a handful of customers already there and seated in the outer seats by the wall and windows.  The dining room is a decent size.  I chose a spot near the door.  Behind me was a bar with a couple TVs and a small selection of beer and wine.  Right away I had a basket of chips and a bowl of salsa delivered and I ordered a Tecate and the bean dip.  I had heard really good things about the chips from someone about a week ago and one of the first things I saw on Yelp’s page was a snippet raving about them.  I figured the bean dip would be a good compliment to them if they were as good as it seemed they would be. 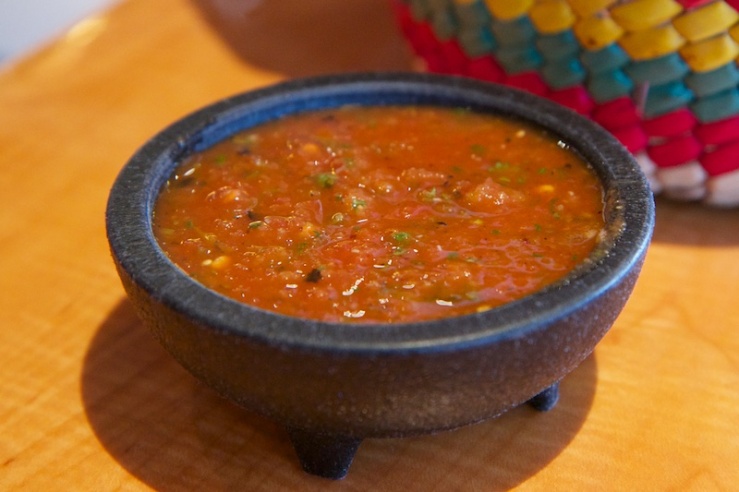 Boy were they!  I think these might be my 2nd favorite chips so far behind the ones at Carmelita’s.  They weren’t as heavy as those, but they just had the most perfect crunch to them that I haven’t experienced anywhere else.  The salsa had a good kick to it, to the point that I stopped eating it until my Tecate came out.  I slid the salsa out of the way when the bean dip arrived because it was in a completely different league of appetizers.  Refried beans, cheese, avocado and tomatoes made up the large dish with a few chips stuck in it to top off the presentation.  The beans were hot and melted the load of cheese on top into a thick, gooey layer where many chips met their doom.  I had to help them out by scooping it all up with a fork first and then dropping it onto a chip.  This is a big order, but at $5 it felt about right.  It was certainly too much for one person and I took the rest of it home with a little bag of chips. 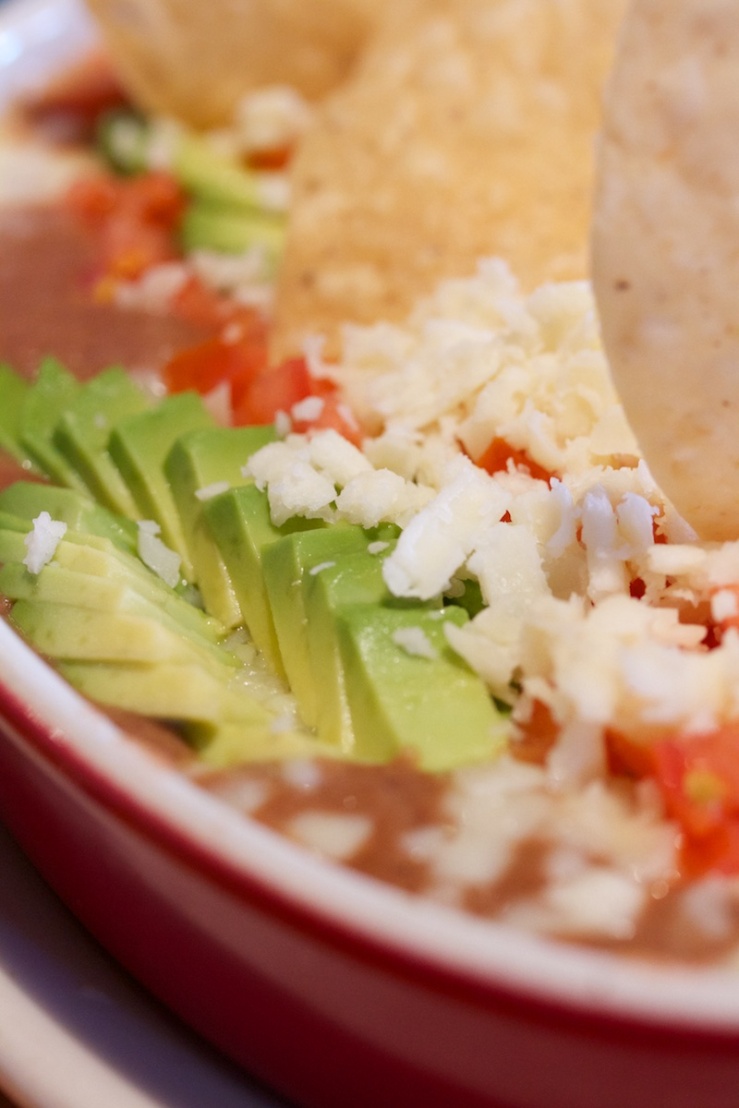 Along with my entree (I’m guessing, the menu seems to indicate it’s additional but I asked if it was included and the server said yes) came a choice of soup or salad.  She told me what the soup was and described it as a kind of meatball soup.  After looking around online when I got home I think it was Albóndigas soup.  That’s what I chose, and it was a little cup of bright orange/red broth.  I adjusted the spoon a bit to reveal a large meatball hiding under the surface along with some chopped veggies, most notably carrots.  The meatball was easy to break apart into several pieces with the spoon and was simple but pretty decent overall.  The tomato-y broth itself was a lot more interesting though and had a really tasty heat.  I knew I didn’t want to fill up on bean dip and soup so I ended up sipping the broth more than eating the contents.

Soon my entree arrived.  It should be no surprise to many of you that I went with the carnitas plate.  I actually did consider some other options on the menu but when I got to the description of their carnitas plate I just gave up and closed the menu.  “A traditional Mexican dish of pork seasoned with citrus flavors and prepared crispy in the style of the state of Chihuahua, Mexico.”  It was the last part that got me, I love crispy carnitas.  The plate came with beans, rice and a little dollop of guacamole.  I chose corn tortillas as usual, but this time I actually decided to use them properly.  Normally I would just rip them up into a pile on my plate and eat the whole thing with a fork.  Anyway, a little rice, beans, guacamole and carnitas scooped into a tortilla and I chowed down.  This was absolutely amazing.  The rice and beans were about average, but the carnitas was just over the top fantastic.  Every bite was filled with tons of delicious flavor and the meat was super tender, juicy and crispy around the edges just the way I like it.  I think this carnitas plate edges out my previous favorites at Plaza Jalisco and El Sombraro by just a hair.  It’s the crisp that did it I think.

Quite an excellent lunch I think.  The only thing I might nitpick was that the service slightly declined towards the end.  My server changed twice during my visit.  The first two were great, but the last one (that perhaps arrived late?) was, I wouldn’t say bad or rude, just not as polite as the others and didn’t really seem like she wanted to be there.  Other than that little thing though I would put Sabores up there with the best Mexican restaurants/taquerias in Roseville.

One thought on “#101: Sabores Mexican Cuisine”