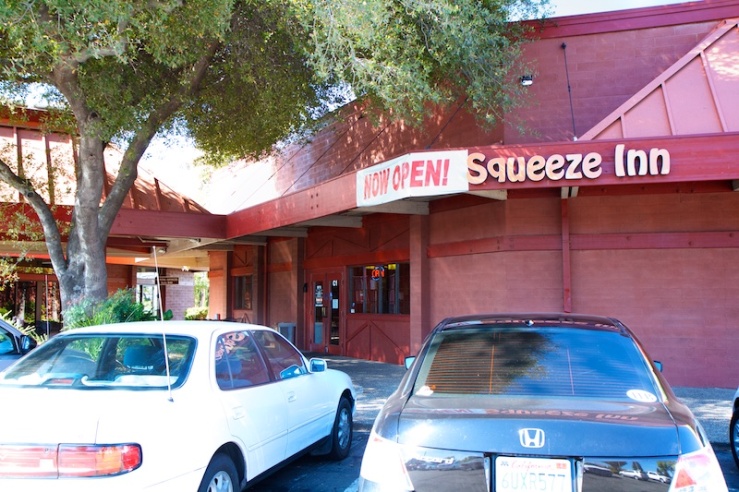 The Squeeze Inn is something of a Sacramento area legend and I’d be very surprised if you haven’t already heard of it.  They’ve expanded quite a bit recently and this Roseville location opened up just about one and a half years ago.  They are known for their big cheeseburgers with the signature “skirt” of overflowing cheese.  I’ve been to the original (both the original original as well as the current Power Inn location) and this one.  The Roseville location dwarfs even the expanded original Squeeze Inn, having taken over a spot previously occupied by Round Table Pizza at North Sunrise and Douglas.

Demand for Squeeze Inn burgers was very high just a few years ago, and with just one tiny little spot it resulted in very long and slow moving lines.  Now that they’ve expanded the lines have mostly evaporated, at least at the times I’ve gone.  When I arrived today for lunch at noon I was kind of surprised at how empty the place was.  There was only a handful of other customers spread around the dining room.  I walked right up to the register and after a quick skimming over of the menu I placed my order of a SqueezeBurger (100%Beef, 1/3lb. mayo, mustard, tomato, lettuce, pickles, onion on a sesame seed bun) with cheese, bacon and mushrooms, a small order of fries and a soda. 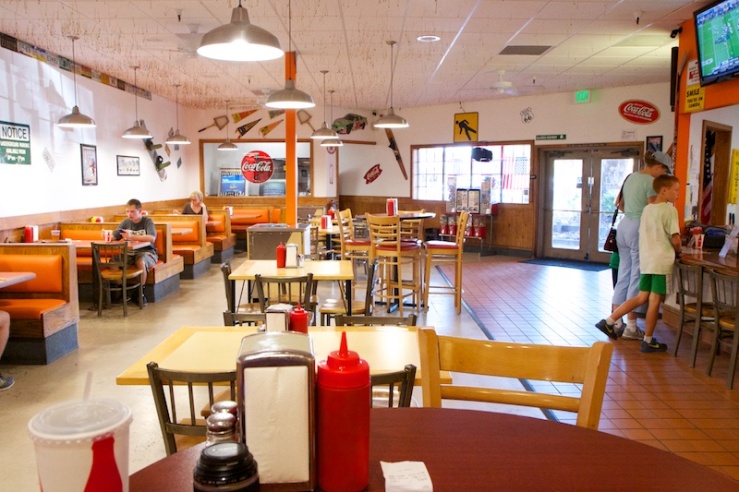 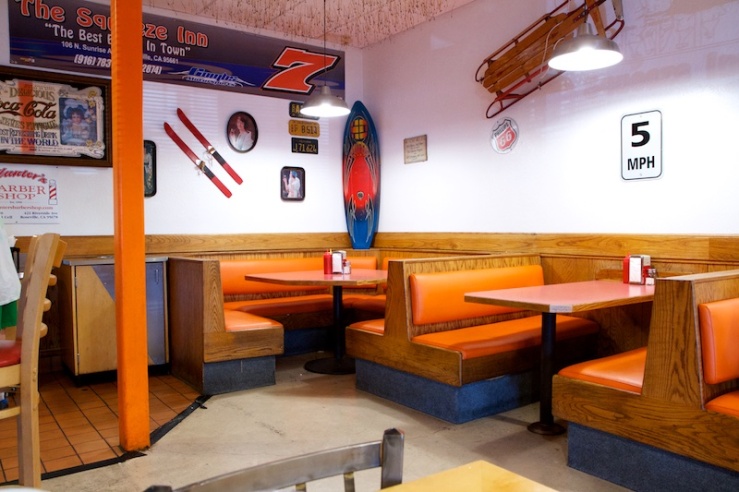 The dining room has a variety of different seating options including the counter, booths, tall and standard height tables.  In addition there is some covered outdoor seating.  One really odd thing that I feel compelled to mention about this space is the restrooms.  It’s a single person restroom but is enormous.  After going through the door you walk another 20 feet or so to the opposite end.  It’s weird.  While I waited in the dining room for my order I noticed some customers looking at the ceiling and I had a bit of a Keanu “whoa” moment when I noticed what they were looking at.  Stuck into the ceiling panels are thousands, maybe tens of thousands, of the long toothpicks that come in your  burger to hold it together.  Later one of the employees showed some children how to use a straw to shoot them up like a blow dart. 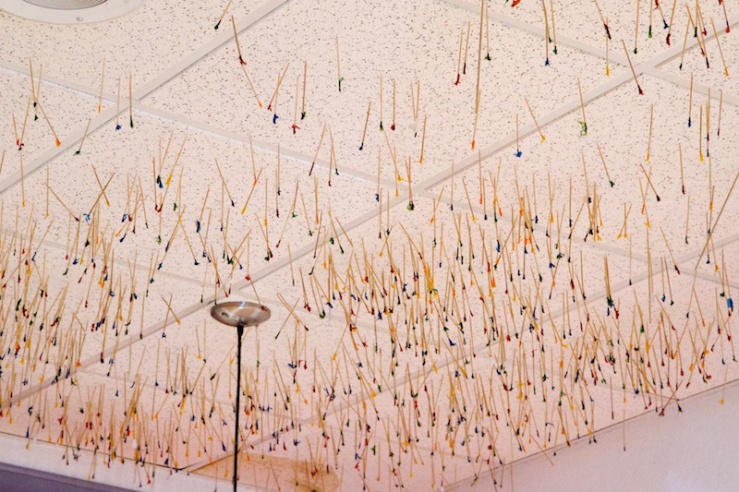 My order took between five to ten minutes and was brought out to my table when ready.  Today’s cheese skirt was a pretty good sized one, and it had some great dripping-over-the-edge action going on.  These burgers are big, messy and above almost all else, greasy.  I wish the napkins weren’t as thin as they are because I feel like, when I was done and looking at the small pile on the table, I had killed a few trees.  I had asked for no tomatoes or pickles.  There was just one large piece of lettuce under the patty but lots of red onions.  It was a challenge to hold the burger together while I ate it.  Lots of mushrooms and other goodies slipped out the back into the paper tray and had to be shoved back under the bun.  I like to tear the cheese skirt off and then put about half of it inside the burger and keep the other half as kind of a side item.

I’ve found the fries at Squeeze Inn to be very hit or miss (much like Five Guys).  Often they are undercooked and nearly limp, other times they are perfectly crisp and awesome (like these ones).  Today they weren’t exactly undercooked, but they were a lot less crispy than I like.  On top of that they were severely lacking in flavor.  I sprinkled some salt over them but it really didn’t seem to help much, and even with dipping in ketchup I gave up on them pretty early.

The Squeeze Inn is an interesting place.  I don’t find the burgers to be all that outstanding flavor-wise, but they are pretty fascinating and a fun place to take out-of-towners for a fairly unique meal.  I didn’t interact with the crew here that much but the people at the Power Inn location are very pleasant and deliver pretty consistently good customer service.  I’ve heard mixed stories about our Squeeze Inn, but didn’t experience anything noteworthy this time.  If you’ve never been I say try it at least once and get the squeeze with cheese, otherwise why go? 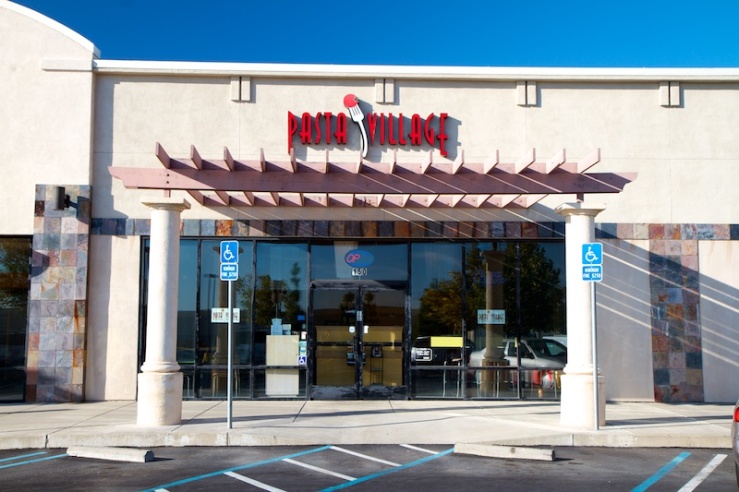 Pasta Village is a little fast Italian joint at Lead Hill & Rocky Ridge.  I must have looked in the windows a dozen or more times as I passed by on my way to Panda Express next door but never turned around and went inside.  I’ve rarely seen more than a few people in there at a time and I was kind of waiting to see if it would eventually close.  Obviously that didn’t happen.  Today I decided to check it out and cross it off my list. 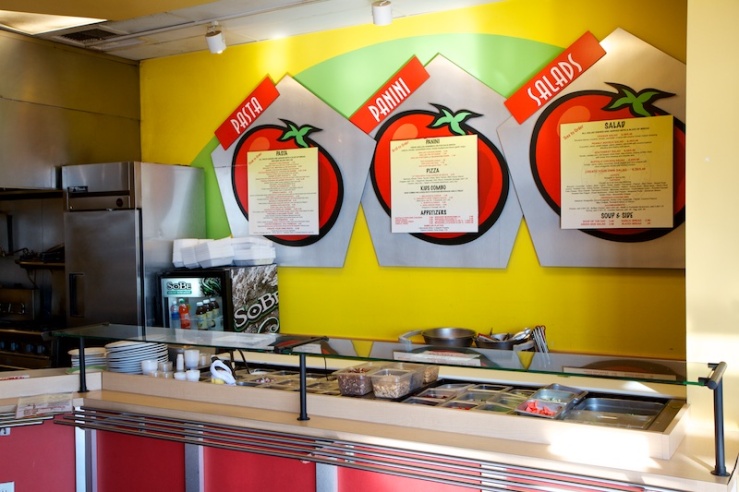 I walked in just after 4pm.  There was a small group ordering ahead of me and a couple in the dining room eating.  I had several minutes to look over the menu before I was up.  Most of my attention was on the pretty good selection of pastas.  I nearly went with Fettuccine Alfredo but decided I should try for something a little less boring.  Skimming further down the menu my eye caught the Tequila Chicken or Shrimp Spaghetti.  The description reads “sauteed shrimp or grilled chicken in jalapeno creme sauce with sweet pepper, onion and fresh cilantro leaves.”  My decision was made. 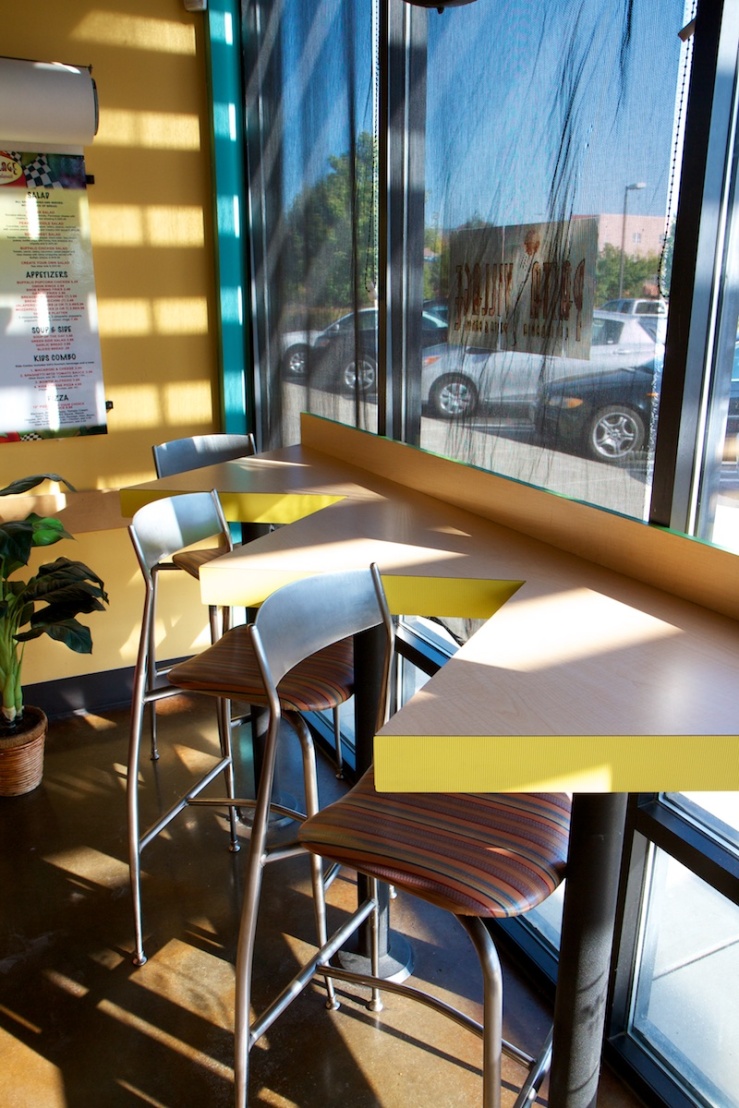 I moved down the counter to the register and placed my order with the only person working at the time (who turned out to be the owner).  He warned me that the Tequila Chicken Spaghetti was spicy, which was nice, but I was ready.  I ordered a soda and the total came to just over 10 bucks.  By the soda machine there are all the condiments and utensils you need, including oil and balsamic vinegar.  I looked over everything and sat down, though I forgot to actually pick anything up.  The owner was quite busy in the kitchen for a solid 10 minutes or so preparing orders for myself as well as the group ahead of me.  Eventually he brought it out and also went over to that counter and brought me some napkins and a fork.

I was pretty surprised by the size of my dish, it was definitely more than I was going to be eating and it’s not like I wasn’t hungry.  There was quite a lot of little pieces of chicken evenly distributed around the bowl.  I knew this was a jalapeno creme sauce, but I didn’t expect there to be full on slices of jalapenos in it.  Included with the dish was a small slice of bread.  I got up and grabbed a small to go container and the oil and balsamic vinegar.  This was a great idea and the bread was good this way. It ended up doubling as my leftovers container later. I dug into my creamy spaghetti and found that the sauce wasn’t actually very spicy at all.  In fact it was a lot closer to the Alfredo sauce I nearly ordered.  There was a hint of pepper to it to be sure, but nothing like I had expected, especially with the warning at the register.  The jalapenos themselves did in fact pack a bit of a punch though. 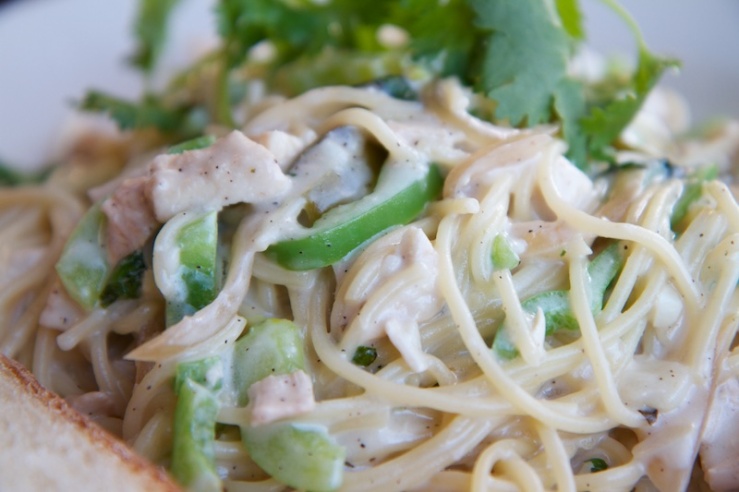 I was really happy with my choice in that it had a creamy delicious sauce and lots of chicken.  I’m not a fan of cilantro for the most part but I honestly couldn’t really taste it that much, particularly when I picked up a piece of jalapeno.  The spaghetti was well done and there was plenty of the whole thing left over to take home as lunch for tomorrow making it a pretty good value.  I won’t be passing this one up so often in the future and I’d definitely like to check out a panini next time.