Today for lunch I went with my parents to Jack’s Urban Eats.  There is one going into the Fountains but I’m not sure that they’re open yet since the location hasn’t shown up on their website.  The one we went to is on the corner of Sierra College and Douglas right next door to Five Guys Burgers and Fries.  I’ve only eaten at this location once but it was so busy that I never actually went inside, instead I grabbed one of the last empty tables outside and gave my order to someone else. 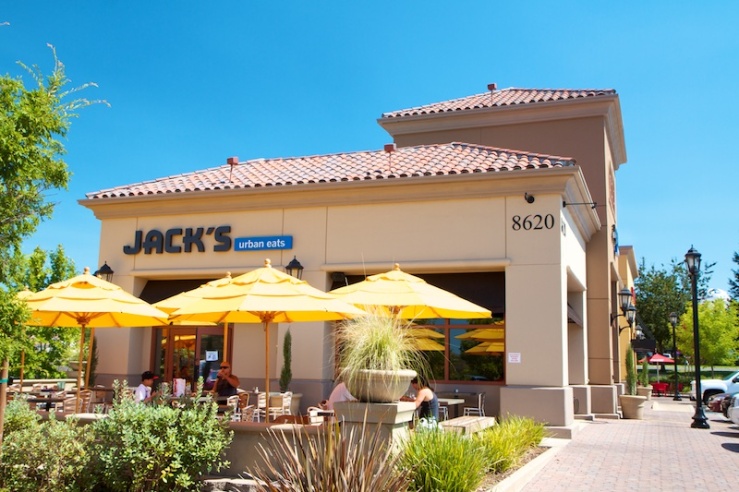 Once inside I was pleased to see a slightly more open layout than with the one I most frequent in Rancho Cordova (technically Gold River, I guess).  That one has a poorly laid out line which wraps around itself and then you basically have to walk through the end of it once more after you’ve paid saying “excuse me, pardon me” to get to the dining area.  This one has a nice long pathway from the front door to the counter at the back, and then as you order and pay, moving to the left as you go, you can then turn around and head directly to any table without much in your way.  I would have liked to take a picture of it but they were pretty busy. 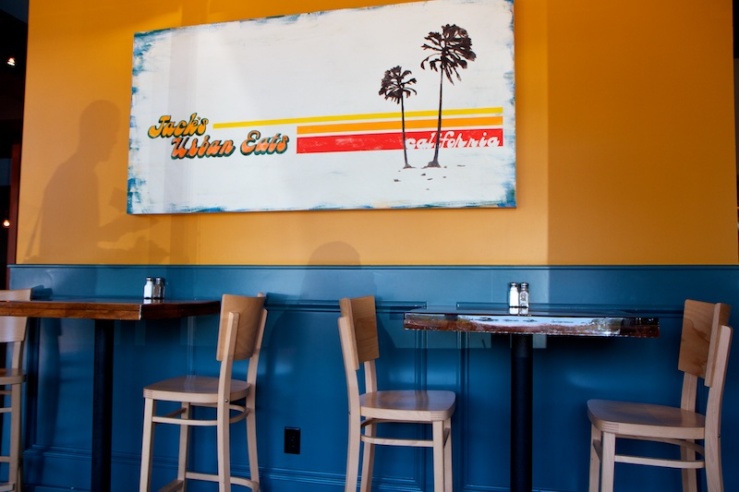 I already knew what I was ordering, I get the same thing almost every time.  Their focus is on salads and sandwiches with lots of fresh ingredients.  I ordered a salad once and was very happy with it.  I’ve tried the tri-tip sandwich and thought it was decent.  I once gave a portabello sandwich a shot but it was just way too much mushroom for me, I was over both the taste and texture about a quarter in.  For me, Jack’s Urban Eats is all about the Urban Fries.  I always tell people that I come for the fries and pick a sandwich to go with them.  The Urban Fries are french fries with blue cheese, spicy chili oil and chili flakes.  They’re AHH-Mazing. 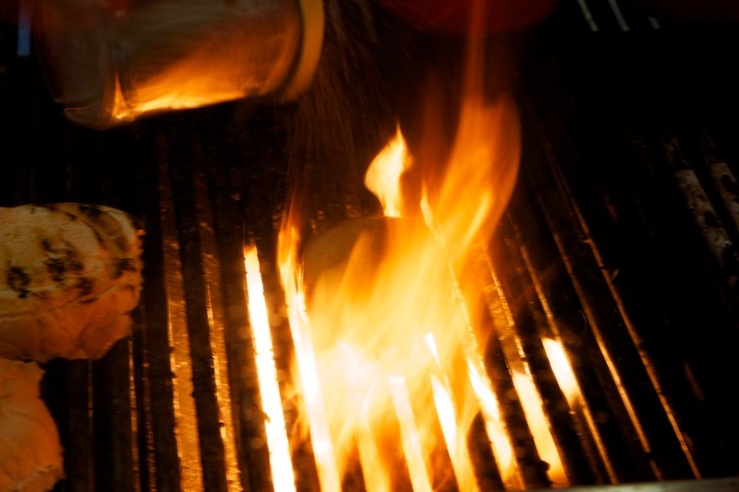 I’ve noticed on more than one online review of Jack’s that some people are confused and put off by the ordering process.  It is not exactly straightforward, but it’s not difficult.  In the same area at the very beginning there are people making salads and taking orders for sandwiches and other main entree items.  I usually just wait patiently until someone calls up the next person for a sandwich (they will specify next person with a salad or next person with a sandwich).  I order my usual Spicy Buffalo sandwich and also put in for my small Urban Fries.  There are several pre-made side options like mac & cheese and mashed potatoes that you can add to your order once you get to the register.  This is where you’ll order your dink as well.  In a way it’s actually kind of similar to Chipolte.  As a result of this system I was separated from my folks in line by a couple of people who had been giving salad instructions when we approached the counter.  As you move down the line you pass the grill where a cook is constantly adding, flipping and removing different things.  They also have a whole turkey off to the side which they pull steaming bits from as needed. 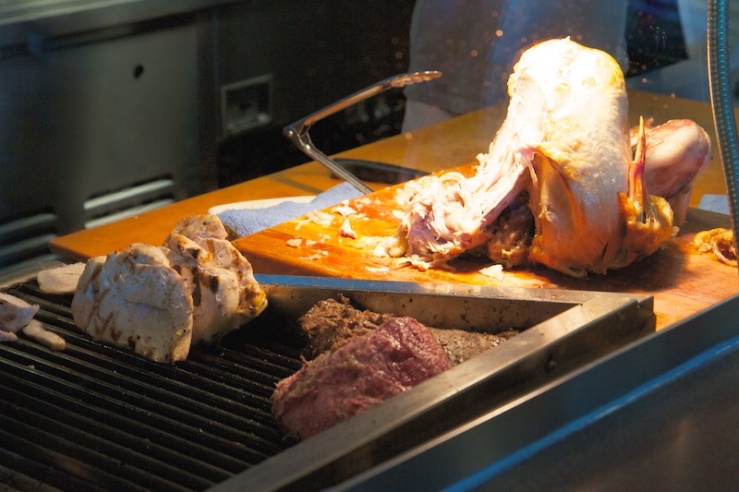 After paying I was handed a little table flag/number thingy and headed further to the left to get my soda.  In all this I lost track of where my parents had gone.  As I started toward the outside patio an employee was already bringing my Urban fries to me.  She followed me outside, where I did not find anyone, then back inside where I still didn’t see them.  Finally, right before I was about to give up and just take the plate from her so she wasn’t standing there awkwardly, I spotted them way on the far end in a little offshoot of the dining room past the front doors.  I didn’t even know it extended that far. 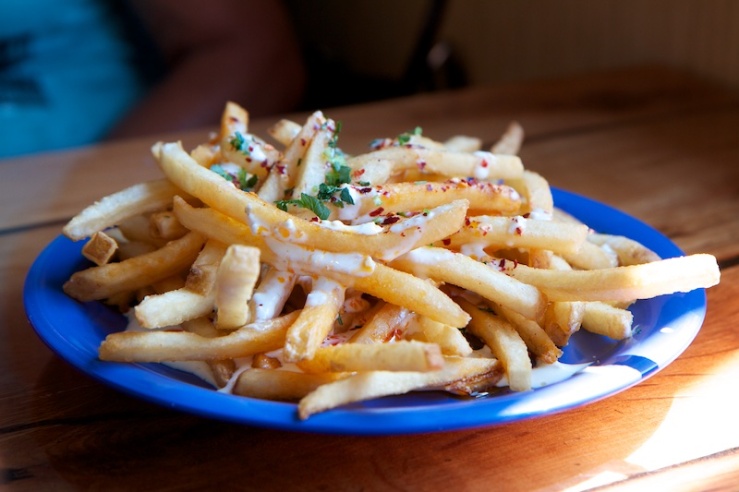 Finally seated, I was just finishing my photo of the fries when my sandwich came out.  They’re always very fast, both this one and the Gold River location.  One thing I would mention about the seating is that the table’s stand is unnecessarily big (at both locations I’ve been to).  It doesn’t leave a whole lot of leg room. 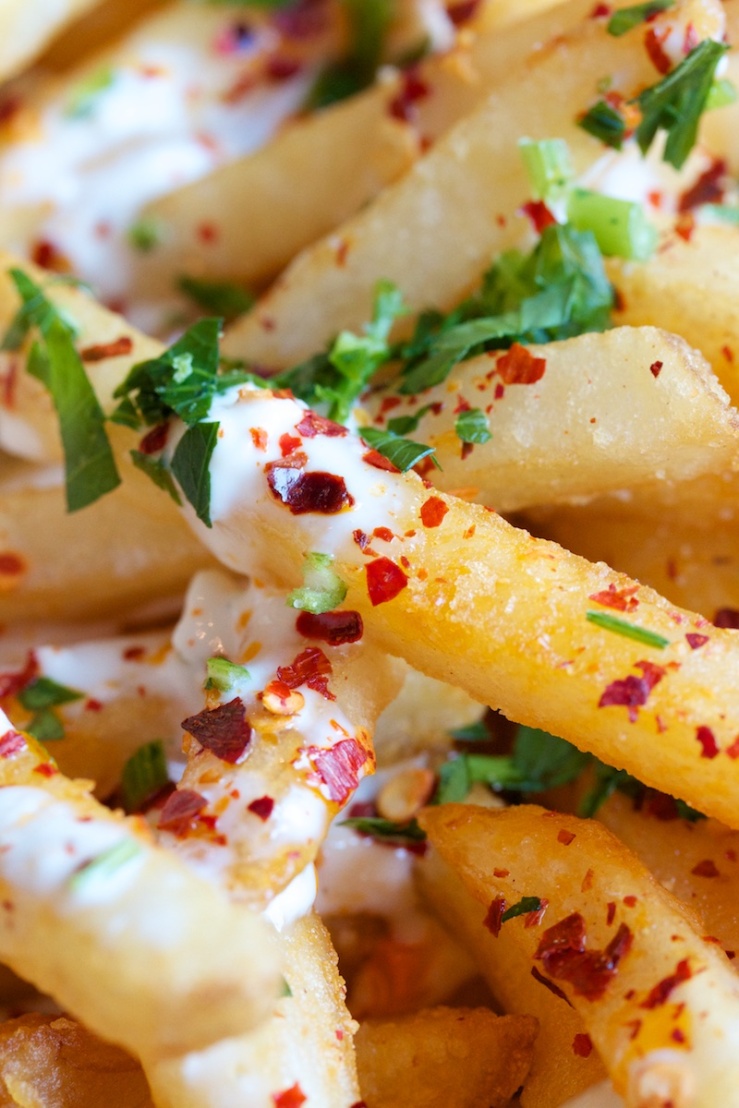 Today the fries were pretty good but they could have been hotter.  I think they must make large batches of them and let them sit under a heat lamp for a bit, considering how fast they usually come out.  It would be nicer if they cooked them to order.  Underneath the pile of fries there is a lot more blue cheese sauce on the plate to scoop up. 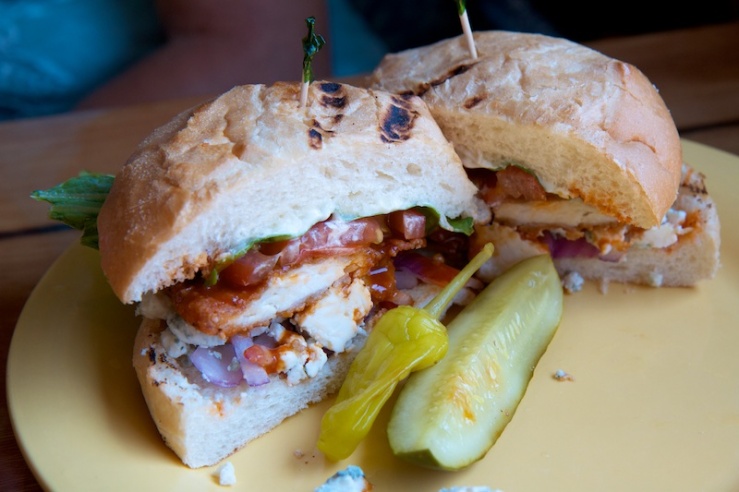 The sandwich was great.  It is a crisp fried chicken breast, dipped in house-made buffalo sauce with crumbled blue cheese, red onion, lettuce, tomato and mayo on a sourdough roll.  This one had huge chunks of blue cheese, some as thick as the chicken itself.  Overall it was fantastic.  The chicken was perfect,  there was tons of flavor from the buffalo sauce and blue cheese crumbles and the produce was crisp and fresh. 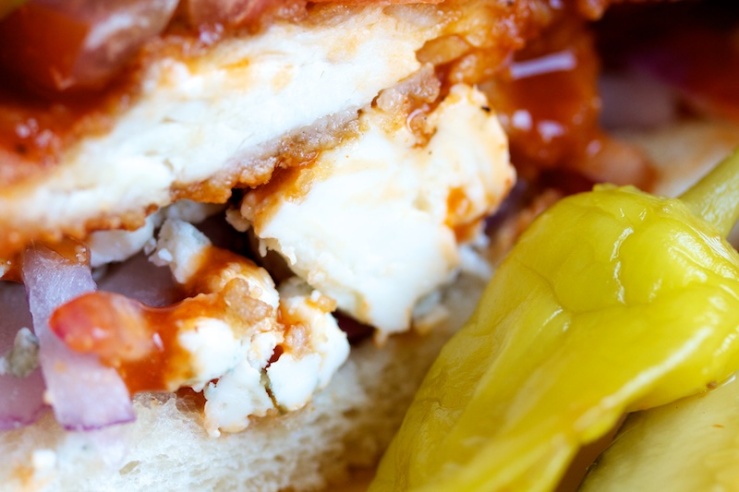 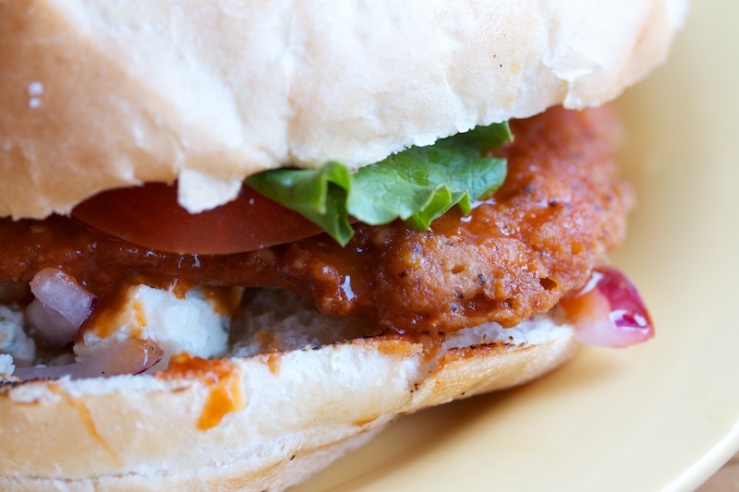 Given how nice and large this location it, I am staring to question the decision to put one in where the Counter was.  That is a pretty small little spot and I bet it’s going to be a very busy & cramped Jacks.  I will definitely continue to come to this one either way.