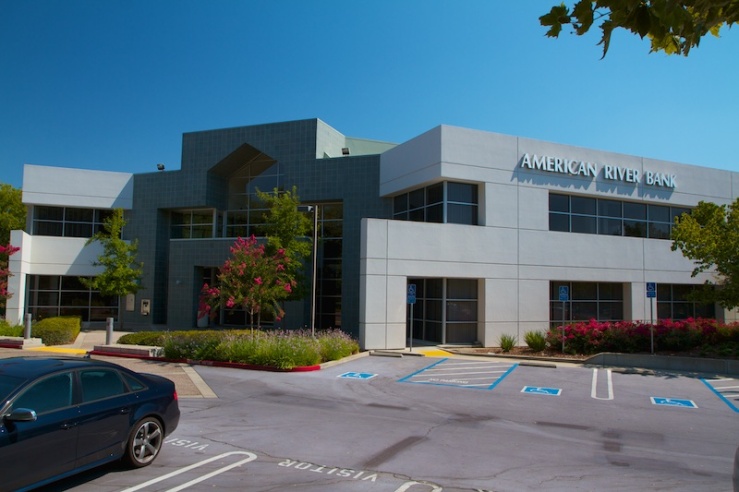 Last Monday I had a rare opportunity to be back in Roseville pretty early due to having a Dr. appointment after work.  I took advantage of it by crossing off the list a little cafe which has pretty limited hours.  Cafe Elletti is a tiny little joint in an office building near the corner of Douglas and Eureka.  I only found it because I was doing generic “food” searches on Google maps.  Unless you worked in the building you’d probably never know it was there. 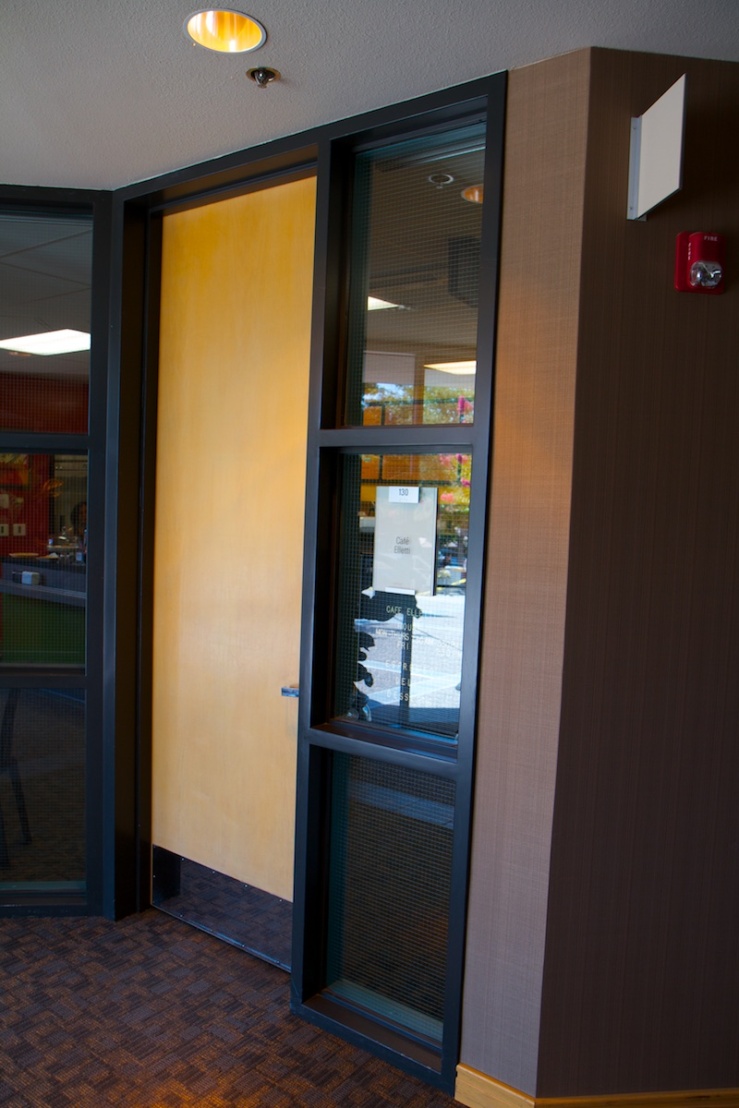 I headed in at about 3PM.  From the front doors of the main building it’s straight down the center hallway and the last door on the right.  Inside there is a tall counter loaded with chips, bagels, teas and other things.  I could barely see the woman that greeted me.  Over to the left by the register I had a clearer view of the menu on the wall and told her I would need a minute to decide what I was getting.  She resumed tidying up as they got ready to close for the day (Mon-Thurs 7:30-3:30, Fri 7:30-2:30).  They have a larger selection of sandwiches than I would have expected for a little place like this (see the menu here).  I decided on the Turkey, Cranberry & Cream Cheese sandwich (on sourdough walnut wheat bread).  I had a choice of chips or cole slaw.  I went with the cole slaw to continue to explore my taste for it. 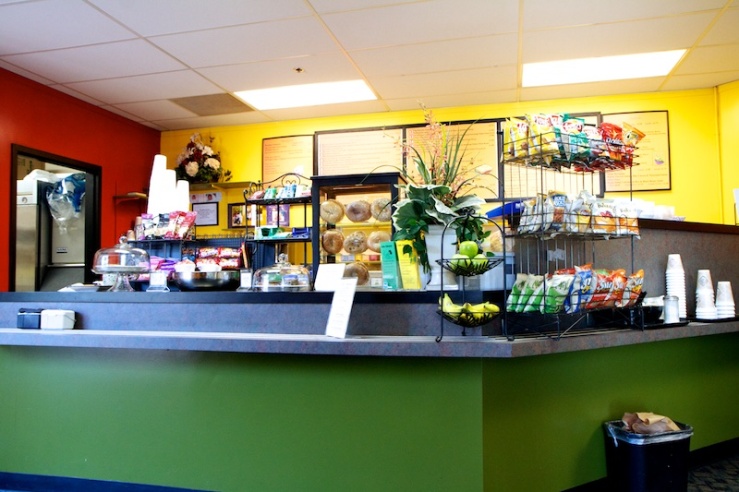 There are about a half a dozen small tables in Cafe Elletti as well as some outdoor seating (which looked like it may have been closed or under construction, there was caution tape visible right outside the door).  I was the only one there and took a seat near an inside window.  Each table has a box of kleenex and decorated salt & pepper shakers.  I realized I forgot to get a beverage but didn’t feel like doing another transaction.  They have fountain sodas and a cooler with a standard array of bottled options.  There was also a freezer to the right of this that had a sign reading something like “Ice Cream Inside”. 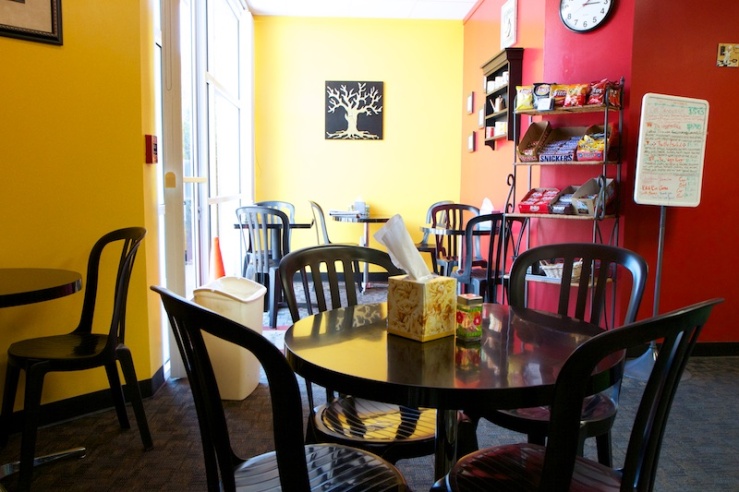 Probably no more than five minutes after ordering I had my sandwich delivered.  The first thing I noticed was how oddly colored the bread was.  It almost had a blue or purple tinge to it.  I think it even threw off the white balance on my camera.  There was nothing wrong with it though and it tasted fine.  That’s just the way it looks, I guess.  The sandwich was extremely simple, the only ingredient I could tell that was in addition to turkey, cranberry & cream cheese was lettuce.  If there was mayo or some other condiment I didn’t notice it.  Overall it was decent.  The turkey was moist and there was plenty of cream cheese and cranberry sauce.  If it had mayo, it could have used some more.  The bread was good but was a little on the dry side, which might be normal for that kind.  Looking back at the menu it seems that this sandwich should have also come with tomatoes, onions and pickles, I’m not sure why it didn’t have them.  Tomatoes and onions would have been a nice addition.  The cole slaw was good, if small, and I’m glad I’m expanding my horizons in that direction. 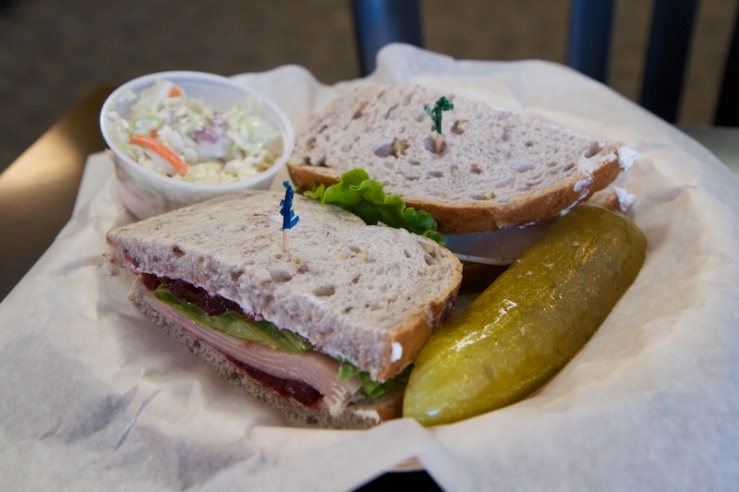 I think there are probably better sandwich choices on the menu, and of course they also have breakfast options at well that I didn’t try.  I wasn’t too impressed by this sandwich Cafe Elletti, but that said I would  gladly welcome such an eatery in my own workplace.  To have such close and quick access to lots of breakfast, lunch and snack options would be really nice, even if it’s not mind blowing.  I hope the workers of 2240 Douglas appreciate the convenience they have right there 😉