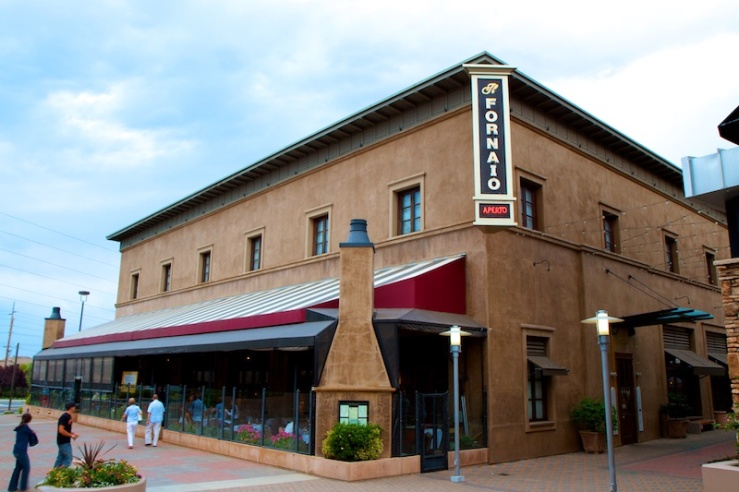 I’ve got a bit of an Italian two-parter this weekend.  Last night I went out to dinner with a couple of friends to Il Fornaio, located in the Galleria.  When I started Eating Through Roseville I had never eaten here before.  Since that time I’ve been twice for special occasions.  Last night was just for fun and the blog.

I arrived a little early, around 7, so I took a seat at the bar and ordered a beer.  They don’t keep any on draught but have a decent selection of about 15 bottles to choose from.  I just went with a Blue Moon.  The bar area is quite large and they seem to be fairly well stocked with liquor.  Most of this area is dominated by two tables inside a large divider-like shape, which is lined on two sides by thee tables each.  Some more taller bar-style tables, a counter along one wall and of course the bar itself offer a good amount of seating.  There are basically three dining areas – the main dining room which extends back behind the host’s desk, the outdoor patio area that runs along the entire length of the restaurant on Galleria’s Promenade side and a somewhat enclosed strip of dining room space between the two. 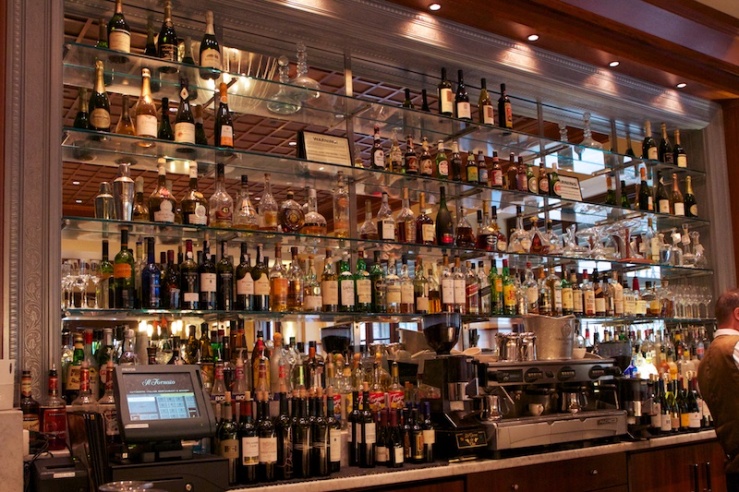 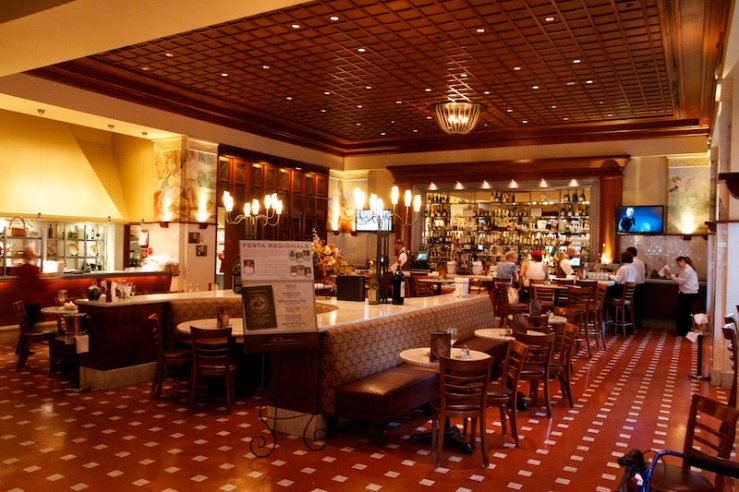 Eventually my friends Justin & Anne arrived and we set off to the front to be seated.  They were only 1/2 to 3/4 full so we had our choice of location.  The weather was very nice out so we asked to be seated out on the patio.  We were seated at a table which was set up for two.  Later we had to ask for the 3rd place setting.  Right away our server introduced himself and took our drink orders.  Anne ordered a glass of wine and both Justin and I ordered Cokes.  As soon as he left another employee brought over the olive oil and balsamic vinegar for the bread that was soon to arrive. 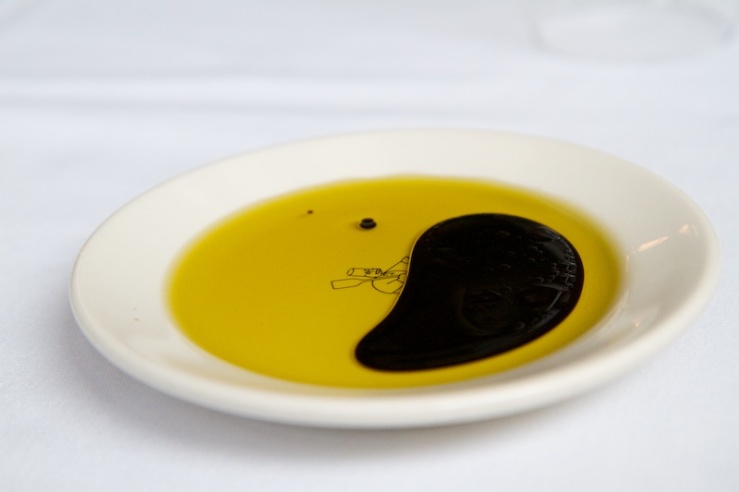 I’ll take this moment to mention that I had this exact same server the previous visit.  It was the day before Mother’s day and we had a large party of something like 8-10 people to celebrate a day early.  That day they were insanely busy and there was some sort of technical issue with the ordering system behind the scenes which caused our food to take something like 1-2 hours to show up.  I can understand a problem like that (I had a delivery order at Round Table disappear on me once right after hanging up with the customer and had no other option but to wait until they called back later to see where their pizza was in order to re-take it, since their name and number disappeared with it!).  What I did not totally sympathize with was how infrequently the server or any other Il Fornaio employee checked on us during this extended stay.  In the end the Manager did his best to make it right by comping the entire order and paying us personal attention once he was made aware of the situation.

Back to last night, our bread arrived and was nice and warm.  It was fantastic with the oil & balsamic vinegar.  We ran out of it about halfway through our basket of bread and eventually had to ask our server for more when he stopped by to take our order.  This was the theme of the service tonight, very little was handled proactively, we had to ask for just about everything. 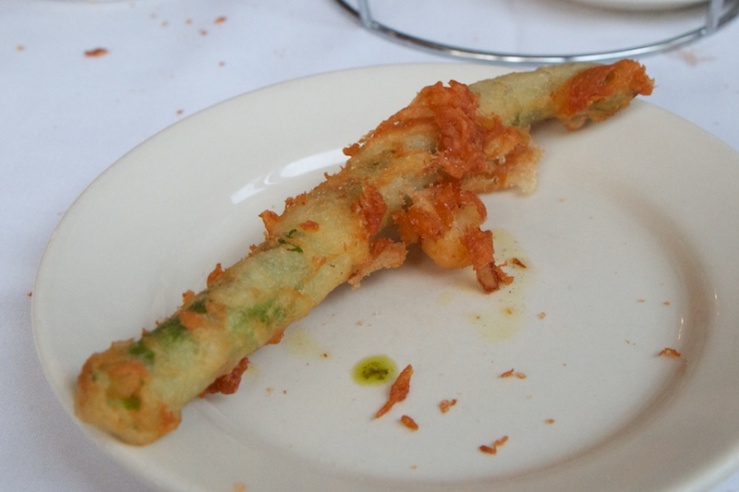 We ordered the Frittura di Verdure appetizer (Deep-fried artichokes, asparagus, eggplant, onions and zucchini; served with parsley sauce and tartar sauce) and this arrived not long after we finished the bread.  The vegetables were good sized, particularly the asparagus which had to be cut into a few pieces each.  Those were soft but still had a little snap to them.  The batter was pretty greasy and I was doing a lot of wiping on my napkin.  The tartar and parsley sauces came in a single small cup.  This of course made me think of Franch (those of you who watch Breaking Bad should know what I’m walking about).  We barely had enough make it through the appetizer.  It definitely would have been better to serve one each of these.  I was surprised at how good the tartar sauce was.  I’ve only recently started to enjoy it and I had no idea it went well with things other than fish.  When our server had stopped by and Justin requested a refill I asked if he could turn on the little lights they had strung up over the length of the patio since it was getting dark out. 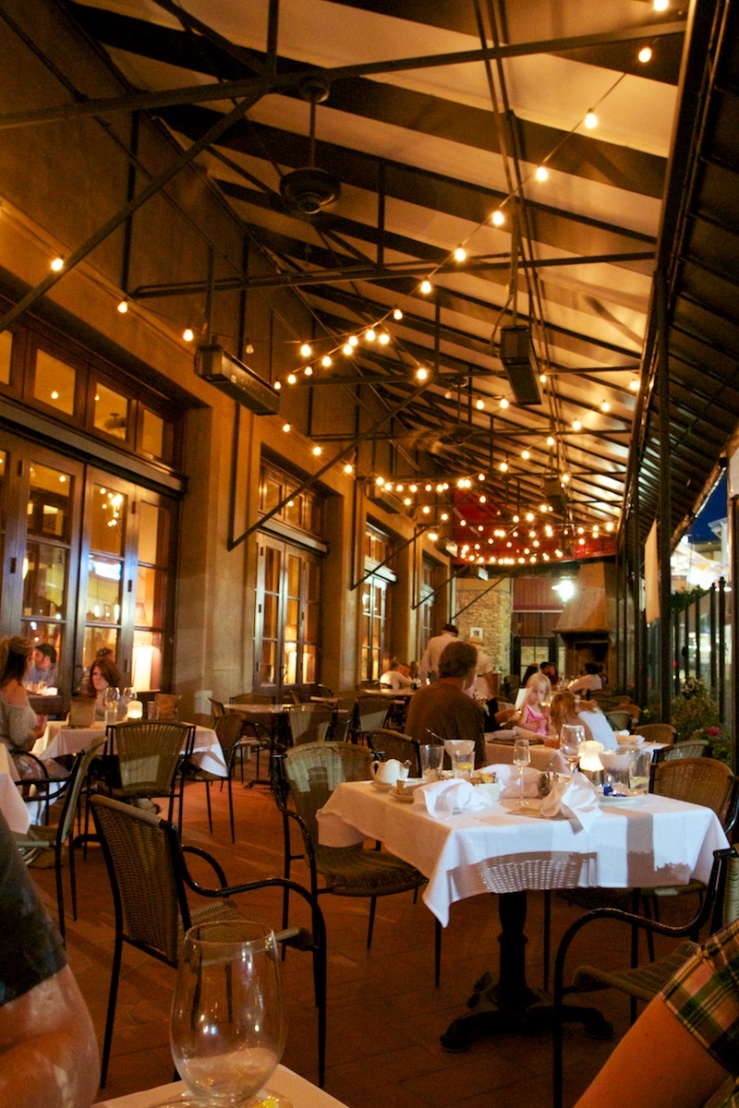 Once the appetizer was finished I placed my napkin on the table in front of my seat and left for the restroom.  When I returned our food had been delivered, and where my plate sat, my napkin was nowhere to be found.  I have no idea why someone would take my napkin while serving a plate, but apparently that’s what happened.  I didn’t really need one for the rest of dinner so I didn’t bother asking.  It probably wouldn’t have arrived very quickly anyway. 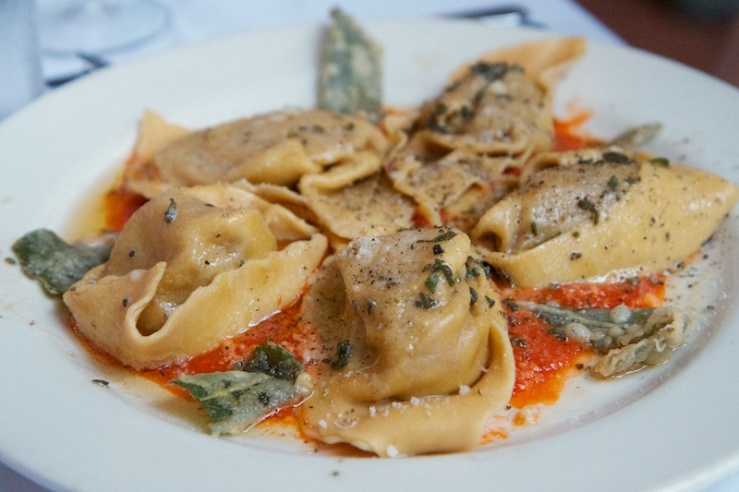 Justin ordered the ravioli di vedura which is spinach pasta stuffed with Swiss chard, arugula and some other things (this was from their special menu which I believe changes frequently and I neglected to get a copy of it).  He said it was good, if you’re into veggies.  Anne also ordered from this rotating menu.  Her dish was a pasta stuffed with butternut squash.  I tried a bite of it and it was pretty decent.  I love butternut squash soup.  This wasn’t nearly as rich, in fact the squash didn’t seem to be all that processed and was pretty basic. 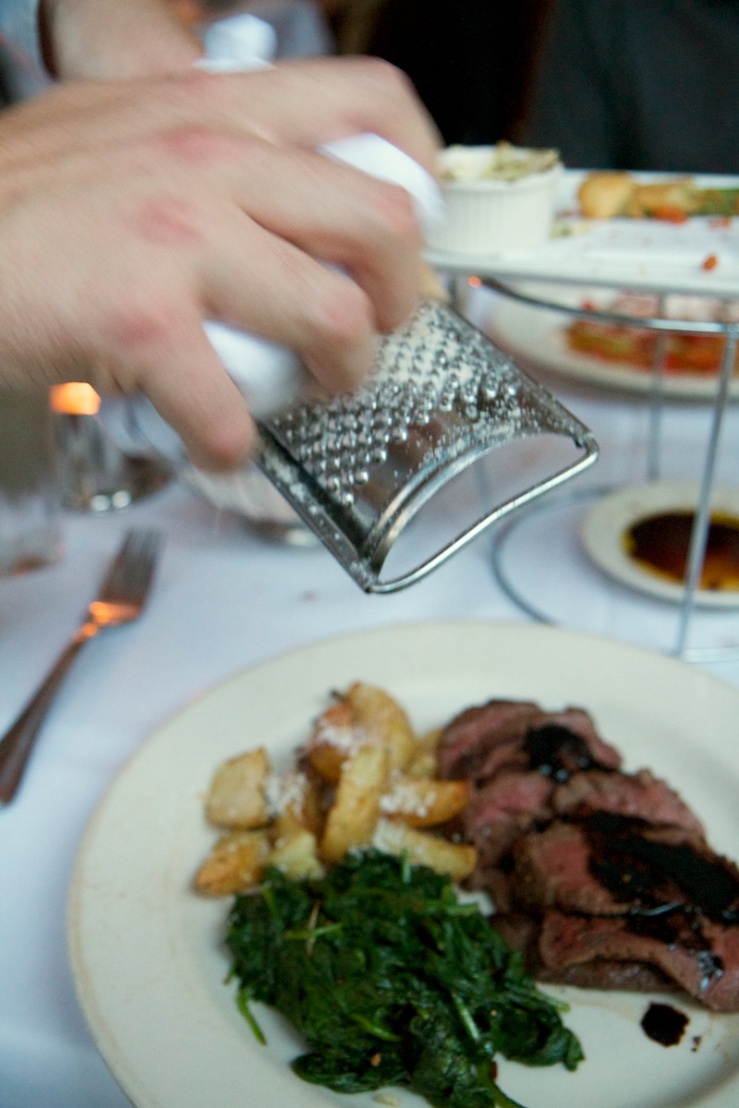 I ordered the tagliata chianina (Beef tenderloin grilled rare and sliced, balsamic vinegar and green peppercorn sauce; served with sautéed organic spinach and roasted Yukon Gold potatoes).  The spinach and beef ternderloin were both really good.  The tenderloin was perfectly cooked, tender and full of flavor.  The balsamic vinegar and green peppercorn sauce was potent and delicious.  There was just the right amount on it, any more and the flavor of the beef would have been covered up.  I’ve had the Yukon gold potatoes here before on my first visit and I recall them being better that time.  Perhaps they had more seasoning or were crispier, I’m not really sure.  These ones just weren’t all that interesting (even with a little grated Parmesan) and I only ate about half of them.

Overall I’ve been generally pretty happy with the food at Il Fornaio.  My service experiences on the other hand have been lacking. 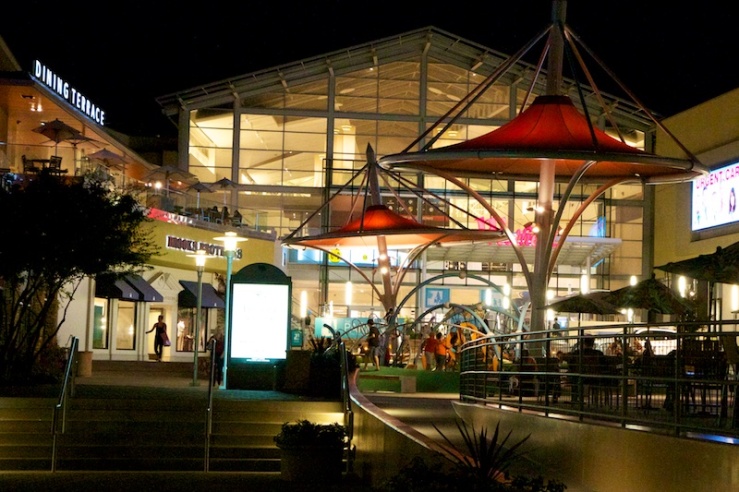 After dinner we headed into the Galleria to get dessert at Melt Gelato & Crepe Cafe.  By this time it was about 10 minutes to closing and they were out of batter for the crepes so it was pretty much just gelato on the menu.   That bummed me out a bit because I was actually kind of in the mood for a crepe.  They have a pretty good selection of flavors which you can see on their website.  I knew I was getting the crème brûlée as soon as I saw it.  I did make another pass to see if I wanted a 2nd flavor and almost went with peanut butter chocolate brownie but decided to keep it simple.  I went with their small cup which was about 3.50.  It didn’t quite taste like crème brûlée in my opinion.  I thought it was actually a lot more like the tiramisu flavor that I had at Miabella.  Regardless, it was good.  We lounged in the little seating area just outside the mall entrance in the promenade and enjoyed our gelato as the mall closed down and became more and more deserted.  I’d very much like to come back for a crepe.  Perhaps I’ll do that whenever I come back to the Galleria for Pluto’s. 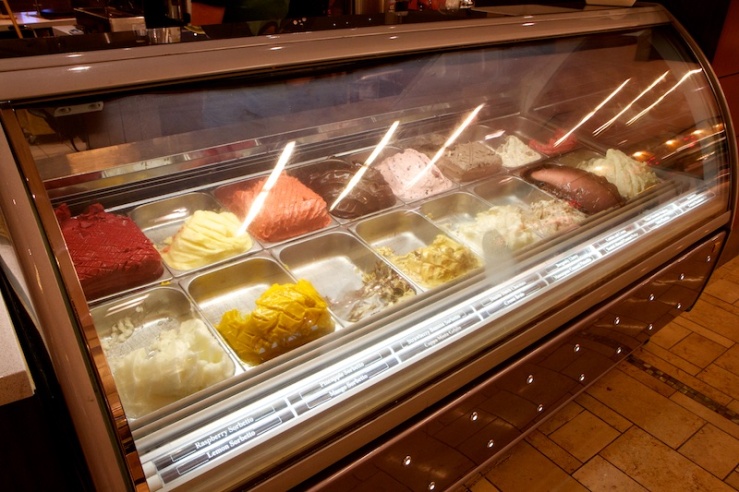