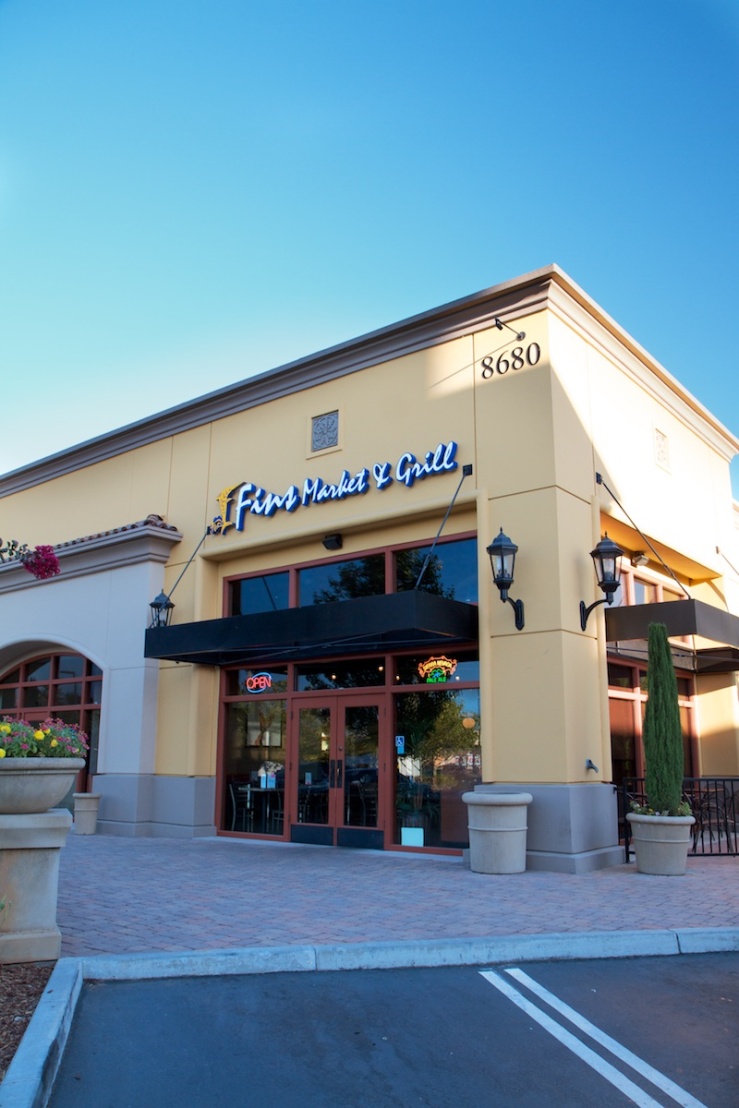 For dinner on Thursday I met my dad at Fins Market & Grill, located in the far back corner of the Safeway shopping center at Sierra College & Douglas.  From what I understand they have had a location in Fair Oaks for around 20 years and opened two more locations, including this one, in’06-’07.  Besides sushi and the occasional fish and chips I don’t really do seafood that often, which is odd because I really enjoy it.  I suppose it’s because seafood restaurants aren’t nearly as common as burger joints out here. 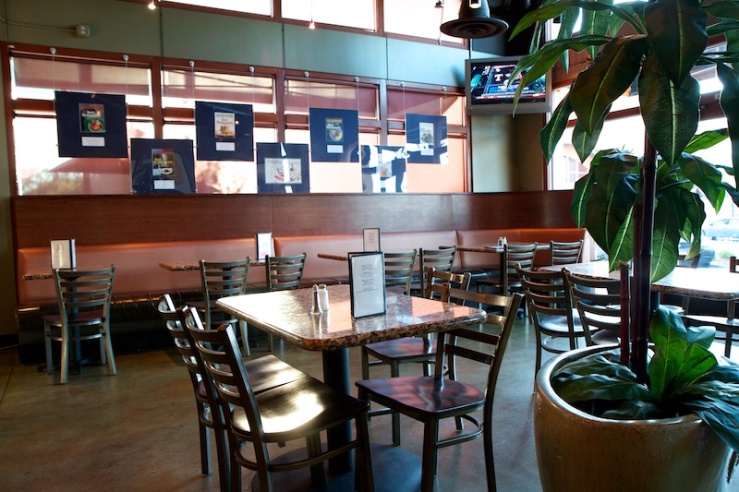 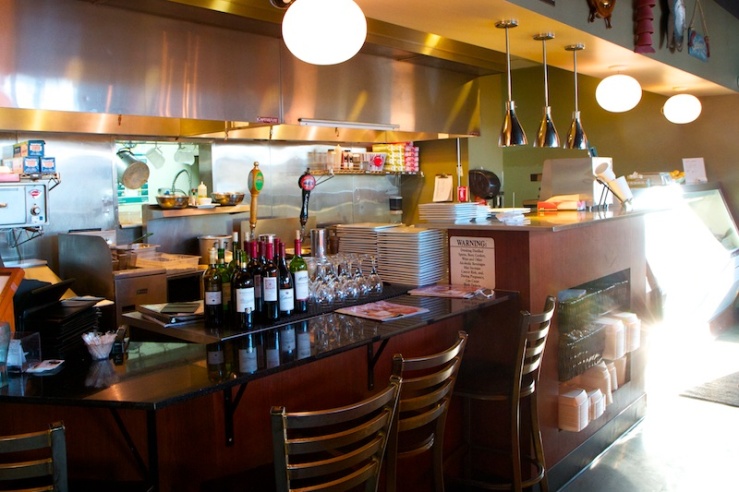 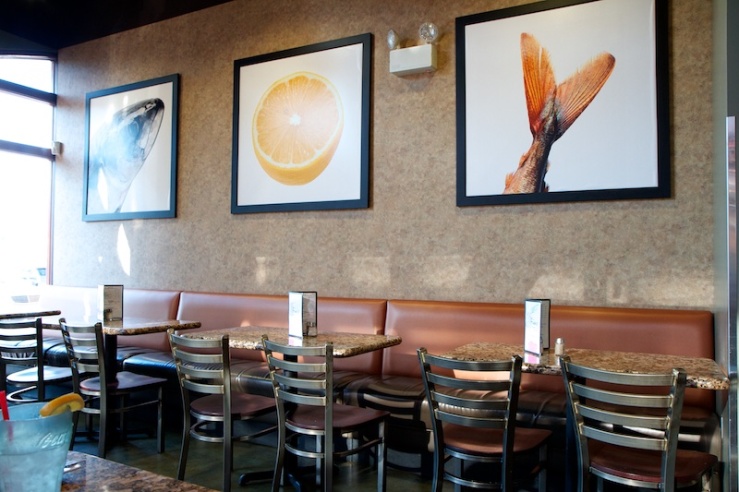 The first thing I noticed when we walked in was the smell.  It wasn’t off-putting but it was a quick reminder that they had the market side of the business in addition to the restaurant.  It’s somewhat hidden behind a divider wall that is just high enough to effectively isolate the dining area from the counter.  It was only a few minutes before I had forgotten about it completely.  In the display case I could see big slabs of different kinds of fish waiting to be taken home.  To the right and a bit before you reach the counter they also have a small tank where I saw a few live lobsters hanging out.  We were seated in the lightly occupied dining room and given a moment to peruse the menu before our waitress came to take drink orders.  I hadn’t quite gotten that far and quickly looked at the beer list which was very short.  I ended up going with a Mr. Pibb which was a bit on the weak side.  The beers consisted of two draught and five bottled, none of which I was too excited about.  The wine list was more more extensive.

After looking over the menu for a bit I decided I was going to go with the sea bass.  My most memorable seafood dinner was an order of sea bass on a Disney cruise well over ten years ago.  It was just unbelievably delicious and pretty much melted in your mouth.  I’ve tried sea bass a few times since then and it’s just never lived up to the memory.  We also wanted to get an appetizer.  I wanted to pick something I normally wouldn’t get, or wouldn’t be available, elsewhere and chose the steamed clams.  When I was giving my order to the waitress she had to tell me that unfortunately they were out of the sea bass (as well as something else I can’t recall).  She apologized and said she realized she should have opened with that news.  It turned out that my dad had also planned on ordering the sea bass and we took a few more minutes to look over the menu again.  Finally I settled on the swordfish, which I don’t think I’ve ever had.  The waitress asked if I would like it grilled or blackened, which I hadn’t really thought about.  Sensing my hesitation she recommended blackened and I went with it. 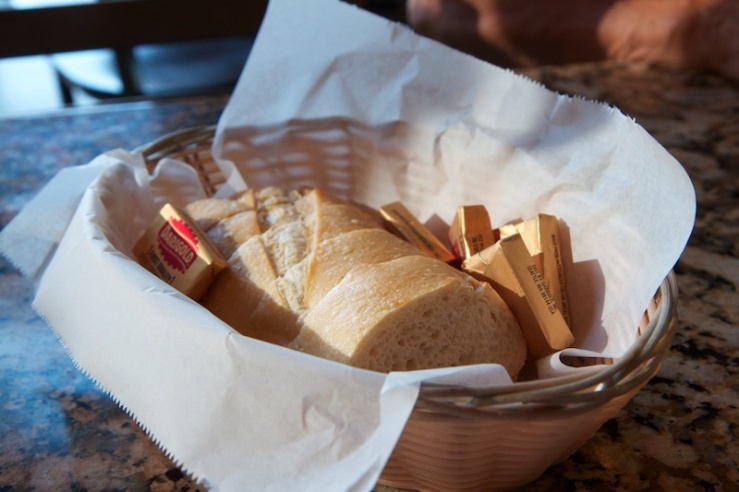 Shortly after placing our orders we received a small basket of bread and butter.  The bread was room temperature and the butter was quite cold.  I went to work clasping my hands together around a butter packet to get it warmed up and spreadable.  By the time it had softened up, our clams arrived.  As soon as they were set down in front of us I realized I had been thinking oysters when I ordered them.  I’m pretty certain I’ve never had steamed clams before so I didn’t really know what to expect.  We were each given little forks to remove the clams from their shells.  Removing them from the shell was extremely easy, in most cases they slid right out with little effort.  I’m not sure what they use to steam them, and we weren’t given anything else aside from a piece of garlic bread each.  They were just a slight bit chewy, but less so than in some clam chowders.  The subtle flavor was hard to nail down, but the thing I kept coming back to was a hint of crab legs.  Like I said I’ve never had steamed clams before, so I can’t say if they were any good or not compared to others, but I enjoyed them for the most part.  The garlic bread was very good, which is probably because it was pretty drenched in garlic butter though still crunchy.  They should just serve this instead of their normal bread in my opinion. 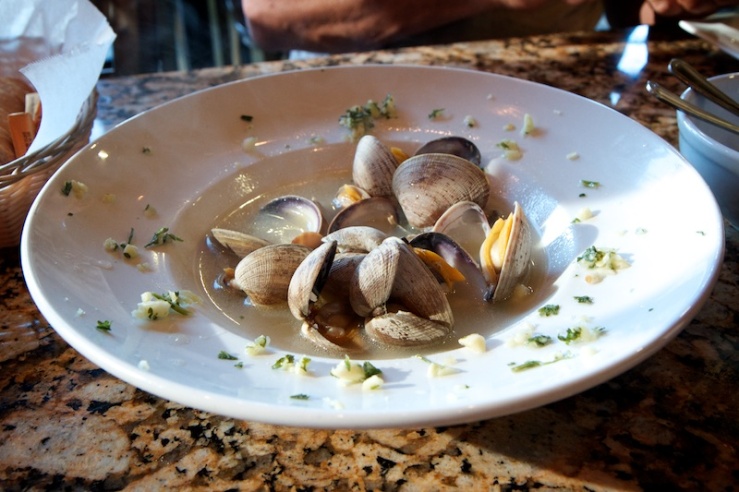 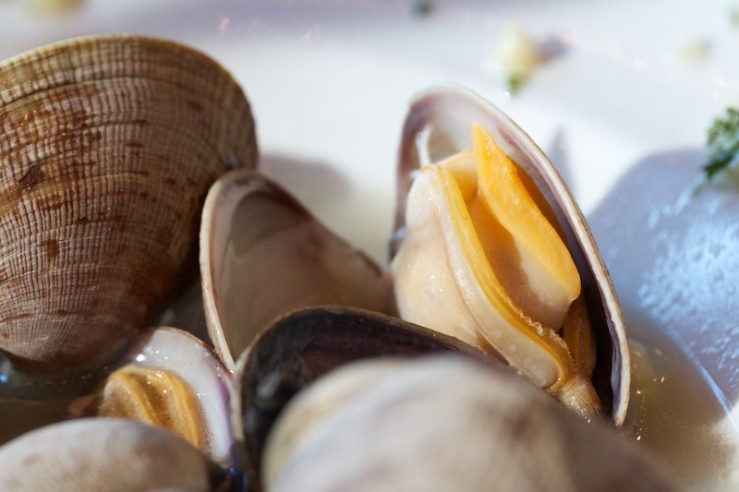 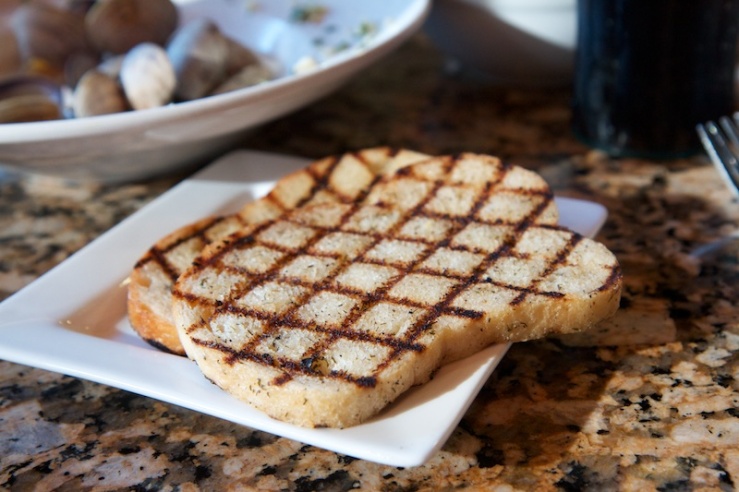 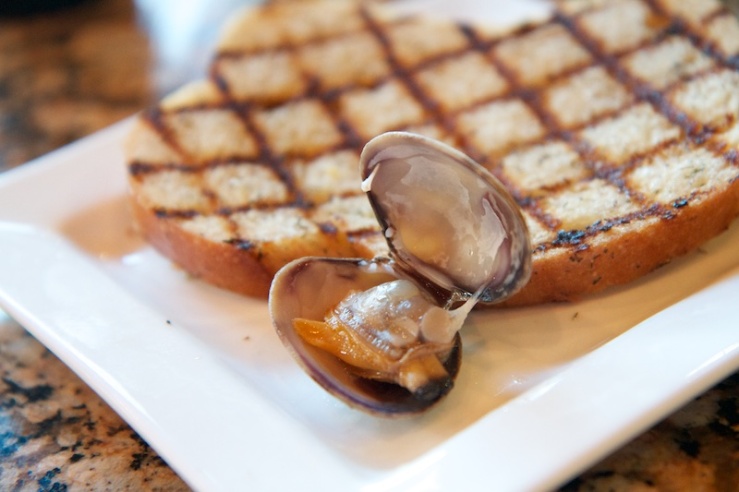 After the steamed clams we were served a Caribbean style cole slaw which consisted of an oil, vinegar and sugar type dressing.  There was quite a bit of it, and I had actually eaten a good 1/4th of it before I realized I had forgotten to take a photo, so hopefully that should give you an idea of how much it was.  I gave up about 1/2 or 2/3rds of the way in because I didn’t want to fill up.  I’ve never really been into cole slaw until just recently, when I had the Capastrami at Capriotti’s in Vegas.  It’s kind of turned me around and I’m willing to give it a solid try when I encounter it now.  This was interesting but I think I might prefer the more traditional, creamier cole slaw. 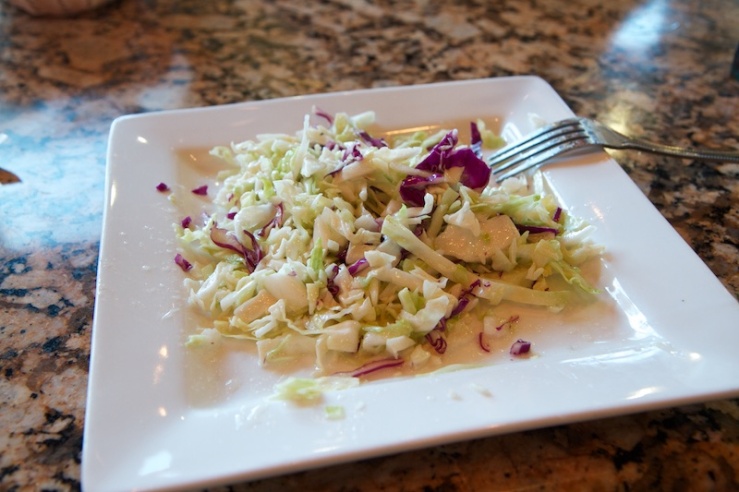 On to the swordfish.  As a side I had a choice of Maddie’s Patties, scalloped potatoes, rice pilaf or vegetables.  After asking what the Maddie’s Patties were I went with those.  They’re basically mashed potatoes with paprika, garlic, cheddar, parmesan and maybe something else I’m forgetting.  The fish was wonderfully crisp on the outside, most and creamy on the inside.  The oils and spices they used to blacken it were very rich and flavorful.  I found myself on several bites just leaning back and savoring the peppery flavors.  There was a bit of spice on the back end that felt like it might build up if you didn’t pay attention.  Switching off to the Maddie’s Patties every couple bites kept it at bay though.  They were almost a kind of rest stop in that they were nice and mild and gave my taste buds a break from the intense flavor of the swordfish and it’s spices.  The clearly recognizable flavor there was the cheddar, but there were hints of garlic and parmesan as well.  They were very good.  The tartar sauce looked like it might have been house made.  It was very good, and in any other situation I might have used a lot of it, but I felt that the fish was so good on it’s own that I didn’t want to cover it up with sauce. 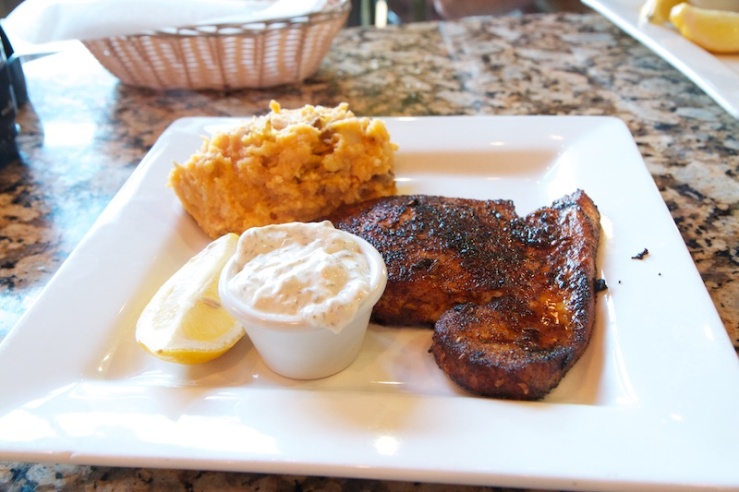 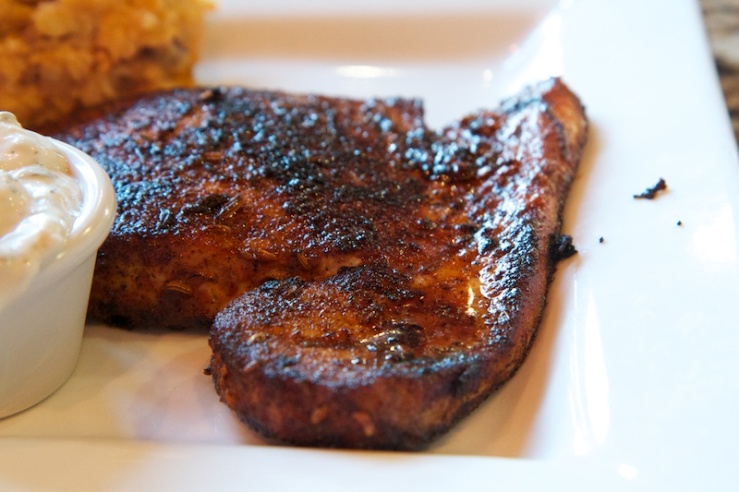 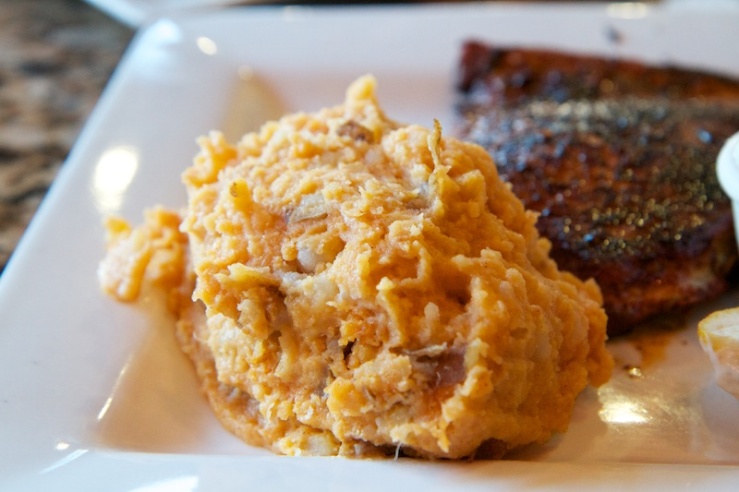 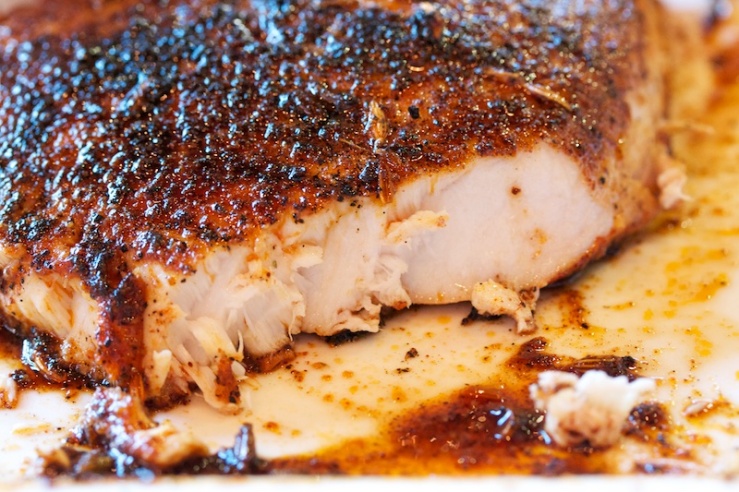 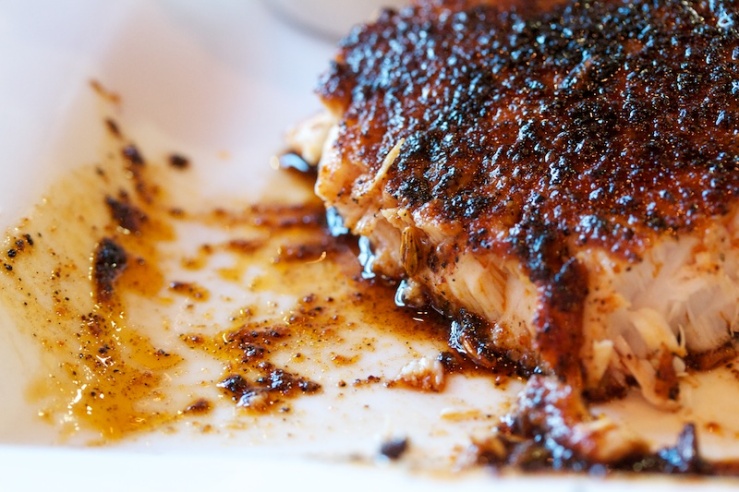 So overall, a very good visit I think.  The opening was a bit rough with limited drink options, no sea bass and mediocre bread, but the swordfish was absolutely incredible and really made me forget all of that as soon as I was eating it.  I would very much like to come back some time and try the sea bass when they have it to see if it can live up to that one I had so long ago.