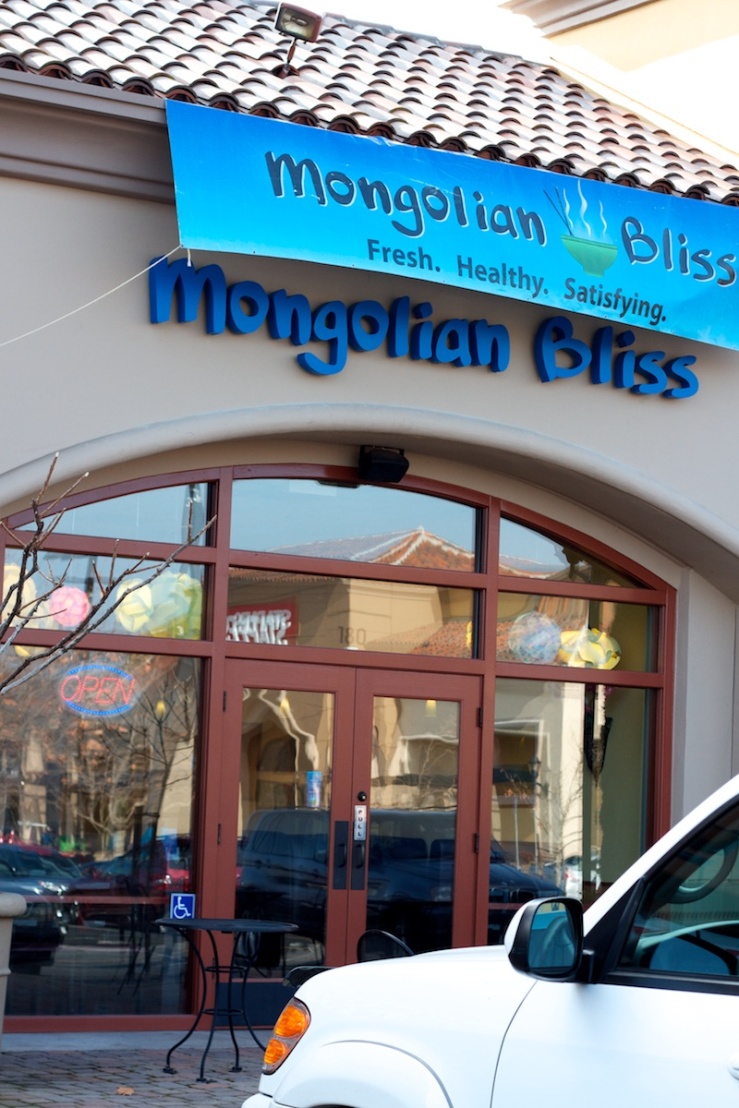 A few weeks ago my parents informed me of a new Mongolian BBQ restaurant that opened in the Safeway shopping center at Sierra College and Douglas.  I love Mongolian BBQ so I was pretty excited to finally try it out.  We are fortunate to have an abundance of Mongolian BBQs in the Sacramento area.  I have friends that moved to Seattle and Vegas that have had little or no luck in finding even a decent one.  Most of the ones I’ve been to around here are just ok, but we are even more fortunate in Roseville to have 2 excellent locations, Great Wall Grill and my favorite, Sizzle Mongolian BBQ (actually in Rocklin, but very close).

My parents and I showed up right at 11am when they opened.  There was a couple that was new to Mongolian BBQ just getting started ahead of us and being walked though the process by one of the employees.  There were two guys working this day and were both very friendly, patient and helpful.  This space used to be a sushi restaurant, I believe, and it’s not a particularly big space.  The counter at the back where you prepare your bowl is just long enough to fit in all the ingredients.  Once you make your bowl you go around the corner to hand it to the cook and get your drink.  This little corner can get cramped quickly once you have a few people in there.  I wonder if it might become a troublesome bottleneck when they’re busy.

Right at the register they have this blue sign which gives you the basic information needed.  The price is $7.99 for a single bowl for dine-in or take-out and $1.65 for a refillable soda in a to-go cup.  In addition to your bowl you get soup, rice and a soft serve ice cream cone.  They don’t include wontons or egg rolls like most others do as an appetizer.  This was the first of several differences I noticed that got me prepared to be let down by this new restaurant.  The next and very noticeable difference was the size of bowl you are given.  It was about a third smaller than normal.  This would typically not be a problem at other places, specifically at dinner, but since there is no buffet style all-you-can-eat at Mongolian Bliss (unless they change the sign at dinner, which I doubt), you need to pack it in, and stack carefully. 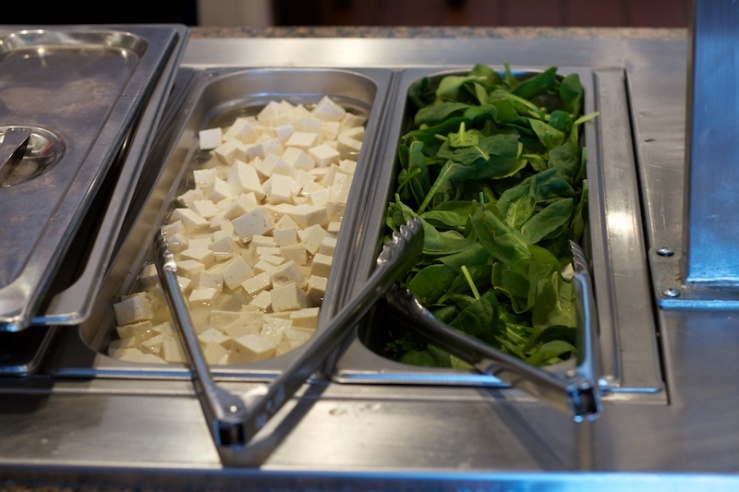 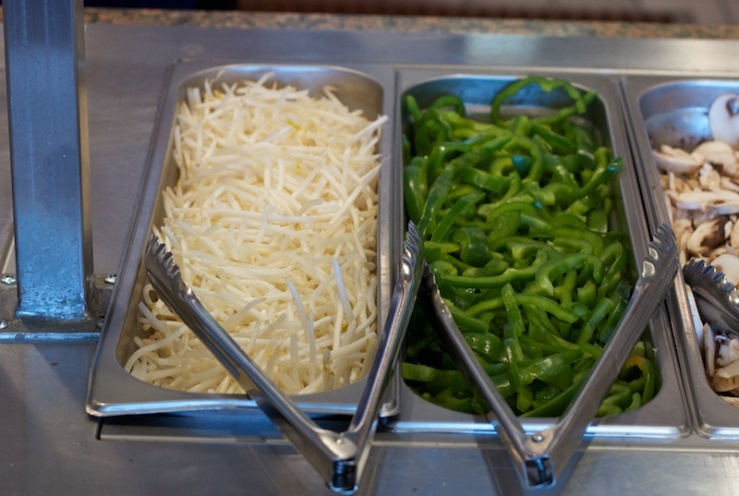 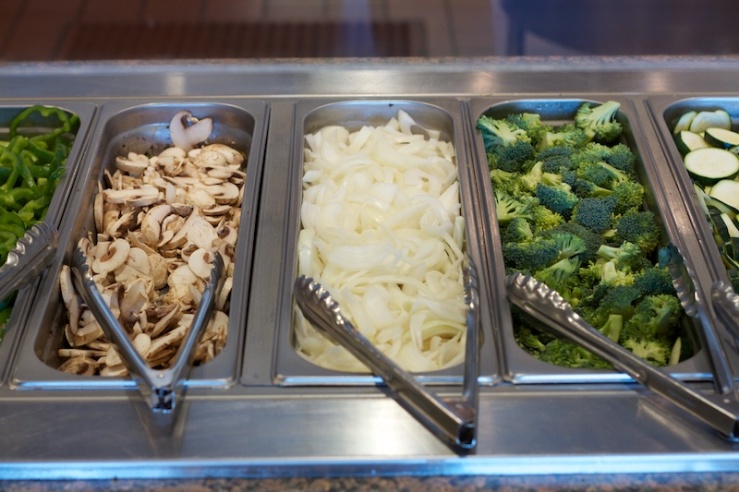 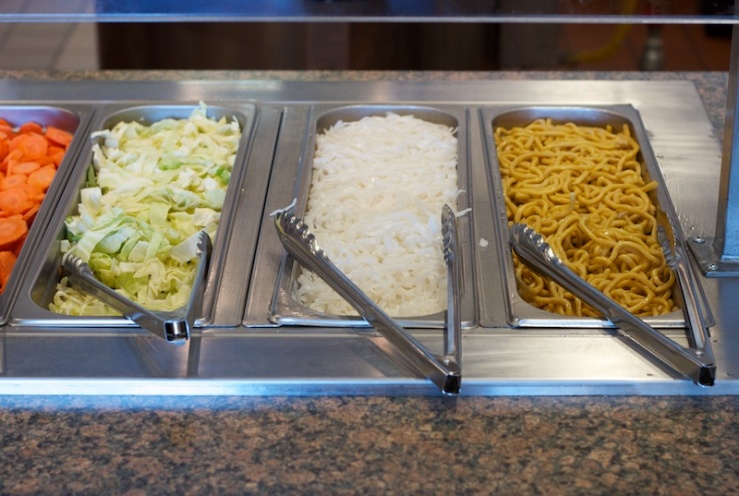 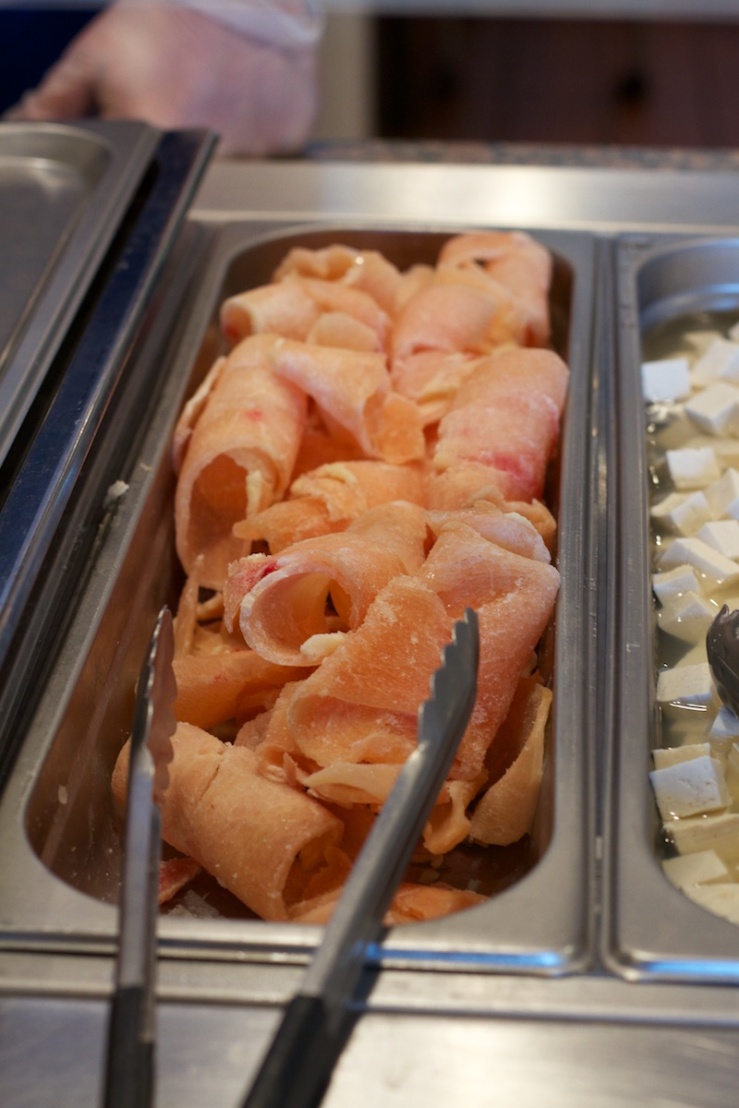 All of the ingredients looked fresh and delicious.  A few things here and there were a bit large, like the zucchini which was sliced whole instead of again in half elsewhere.  The meats were particularly large, and I dug around a bit to find the smaller bits of frozen pork in the tray.  Even still, some of the smallest pieces would be considered large at Sizzle and Great Wall.  The noodles were the larger kind, I usually prefer smaller noodles when given the option.  They also had a very thin and light kind of noodle that I’ve never seen before, so I tossed a bit of those in to try out.  by the time I got to the sauces my bowl consisted of both kinds of noodles, zucchini, onions, mushrooms, spinach and pork. 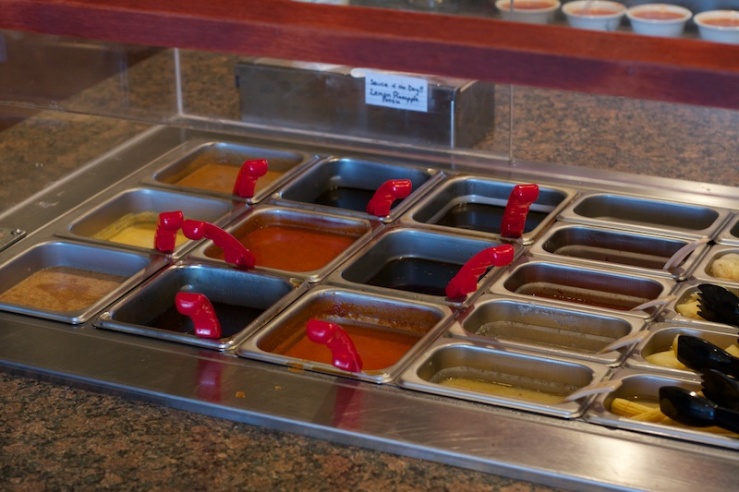 My usual sauce mix is something along the lines of 75% house and 25% kung pao.  Mongolian Bliss, however, did not have anything labeled as house, so I was faced with a conundrum of flavor.  Sauces can make or break a bowl of Mongolian BBQ, so I didn’t want to get reckless.  The sauces that they have available are sweet and sour, soy vinaigrette, kung pao, teriyaki, hot chili, lemon pinapple ponzu (the day’s special sauce), sesame ginger, and a couple creamy sauces (which I’ve never seen before elsewhere) – Thai curry and Thai padang.  I was told that they make all of their sauces in house.  I’m not sure if any other places do this, I’ve never asked, but that seems like a plus.  In addition to these, there is also ginger paste, garlic paste, and some additional options that the cook asks if you would like when he takes your bowl – white wine vinegar, red wine vinegar, soy sauce, cilantro oil or a light chili garlic oil.

I started off with several scoops of kung pao, and then added about twice that amount of the daily special lemon pineapple ponzu in place of house sauce.  I added some garlic paste and slowly rounded the corner while considering my sauce choice.  I asked the cook if he’s ever mixed the traditional sauces with the creamy Thai sauces, and he said it was good and offered up a sample of each.  The Thai padang was a peanut-like sauce, and the Thai curry was just amazingly delicious curry sauce.  I went back around and finished off the bowl with several scoops of that, not knowing at all what it was going to be like mixed with what I already had in there. 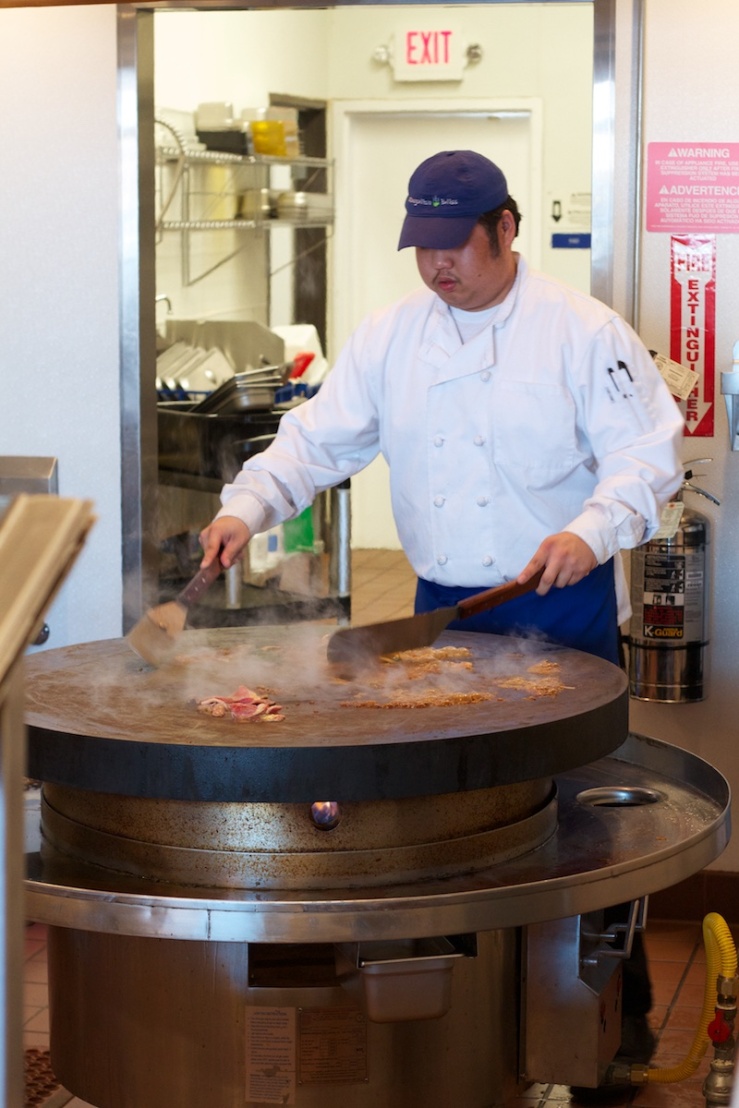 Once cooked, I took my food and joined my parents.  I first took a sip of the soup, which was a type of tomato.  It was very broth-y and light on flavor, but not bad.  The rice was steamed (there was no option for fried) and placed in the bowl with my bbq.  The serving bowls here are larger and shallower than Sizzle or Great Wall, so the rice had it’s own little corner.  It was actually petty good rice on its own, I didn’t mix it into my bowl as my dad had done.  As for my bbq, I was a bit nervous about the sauce mix.  It actually turned out to be fantastic!  The Thai curry was the dominant flavor, and the kung pao gave it all just a bit of heat.  I don’t know what the lemon pineapple ponzu did to the flavor, if anything.  I’d be curious to try that out on it’s own next time (if they have it) to see what it tastes like.  I’m pretty sure the kung pao and Thai curry masked it out. 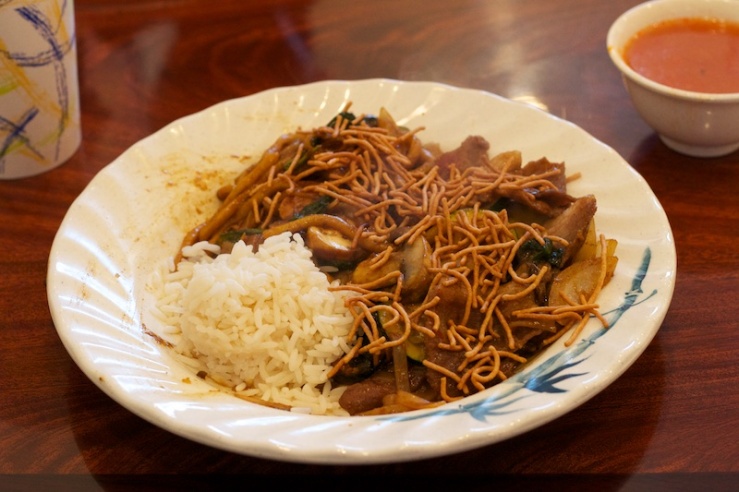 In the middle of our meal, one of the employees came over and asked if we would try a soup that they had been working on lately to see if it was too spicy (they were unable to tell because they had been tasting it all morning).  I took a sip of what was some sort of curry based soup.  It was absolutely delicious.  I told him that while it was definitely spicy, I think it was probably just about right.  I hope they keep it they way it was because I’d love to come back and have some with my bbq.

Despite several little concerns I had when I got started it worked out really well.  It’s definitely a different overall flavor than I’m used to but a very good one.  I do wish they had a larger bowl or all-you-can-eat option as well as an appetizer.  I can definitely see coming back here for lunch since I’m usually over in the area on the weekend.