This may be a bit shorter than normal today because, for some reason, I thought it would be a great idea to completely rearrange my office on a whim.  I’m knee-deep in cables and electronics right now.  Anyway, today I was in the mood for Chinese.  I drive by Chopsticks every day on my way to work and it’s been calling my name for some time now.  It’s right across the street from Rose Garden Chinese Restaurant, and I’ve been curious to see how it compares.  I took a break from my office project and headed over.

I arrived at 5:30 and met my grandmother, who had just sat down when I walked in.  The dining room is well lit. Booths line the outside with tables in the middle.  Hot tea was already served when I sat down.  I had quickly scanned the menu online while I was at work and saw they have most of the dishes you would expect at a Chinese restaurant.  Their menu is actually extremely similar to Rose Garden.  My grandma planned on ordering one of the combo dinner plates which comes with wonton soup, an eggroll, pork fried rice, vegetable chow mein and a main item of your choice.  She went with the lemon chicken which she had read was very good.

I decided to go a little nuts and order several standalone entrees as well as an appetizer.  I have leftovers for a day or two and was able to try multiples things, so it worked out well.  Unfortunately they were out of the BBQ pork buns.  I see them all the time on TV (if it’s got Anthony Bourdain in it, I probably watch it) but have never actually had one.  Instead I went with the crab-cheese wonton raviolis since it was a good opportunity to compare directly with Rose Garden.

The crab/cream cheese filling was good, but the wonton was a bit on the chewy side.  I really loved Rose Gardens crunchier version and definitely prefer them over these. 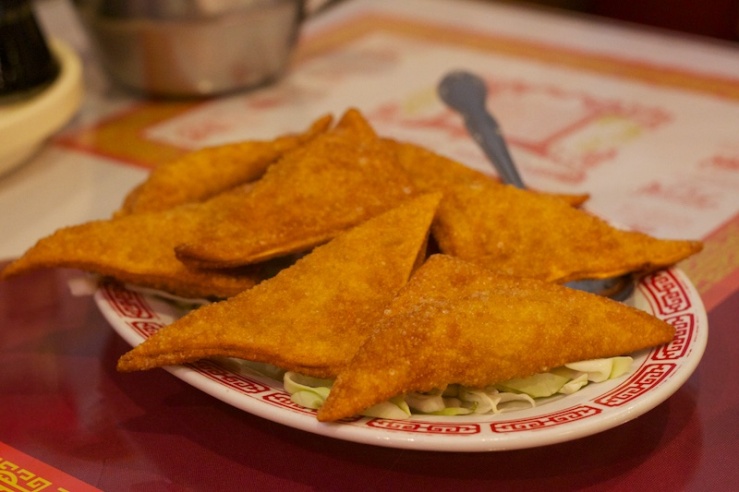 We were also served the wonton soup at the same time, which came out in a large bowl and was scooped into our smaller cups by the server.  I didn’t order it, but I think because I ordered as much as I did she brought out the large version for the both of us instead of just a single serving for my grandma’s combo dinner.  The few times I’ve had wonton soup it was amazing.  This one seemed to have the flavor down for the most part, but it wasn’t hot, just warm.  I think if it were piping hot it would have been excellent.

The main dishes and the combo dinner all came out within a minute or two of each other and soon the table was packed.  I got some looks from other tables, it was kind of awesome.  I tried a piece of the lemon chicken and it was really good.  I’m not usually into lemon-anything, but this is something I would order.  The flavoring was not very strong, it added just a bit of zest to some pretty tasty and crispy chicken. 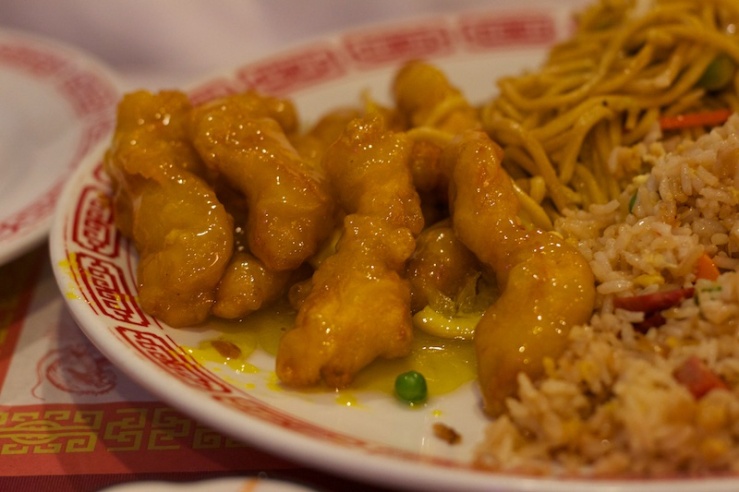 I ordered 3 entrees and picked out a couple dishes I’ve never had before.  The first was beef chop suey.  I had no clue what it was, but it’s always been fun to say!  Basically it’s just chopped up beef, vegetables, and noodles.  The waitress had asked me if I wanted the gravy sauce on top, mixed in or not on it at all.  I gave her a questioning look and asked “on the side?” to which she replied “you wouldn’t want that”, so I told her to surprise me.  It came mixed in, and was good, it made the noodles nice and moist.  The beef was very tender, and the overall flavor reminded me a lot of the sauce that the mushroom chicken at Panda Express is made in.

Next up was barbecued pork with bean curd.  Once again, not a clue what to expect on this one.  Good sized slices of pork topped the pile.  The bean curd were large wedge shaped pieces that reminded me of tofu in both texture and taste.  I was a little weirded out by them in the first couple bites, but found myself digging for them towards the end of the meal.  Mixed veggies and mushrooms filled the rest of the plate.  The pork was much like a typical slice of ham, but there was a pretty considerable amount of fat in in.  More than one bite took some extra time to chew.

Finally I ordered a more familiar dish, the combination chow fun.  I actually intended on getting the pork chow fun but accidentally ordered the combo for some reason.  I believe it had just about every kind of meat in it, chicken, beef, pork and shrimp.  The rice noodles (my favorite, when done right) were almost great.  There were big clumps stuck together that were cooked all the way through but flavorless inside which was a bummer.  The noodles that made it on their own were good.  The plate overall was pretty decent.  I do wish I had stuck with pork, chicken or beef only.  I think they’re better on their own.  The shrimp was fine, but I don’t really care for the texture with the rice noodles. 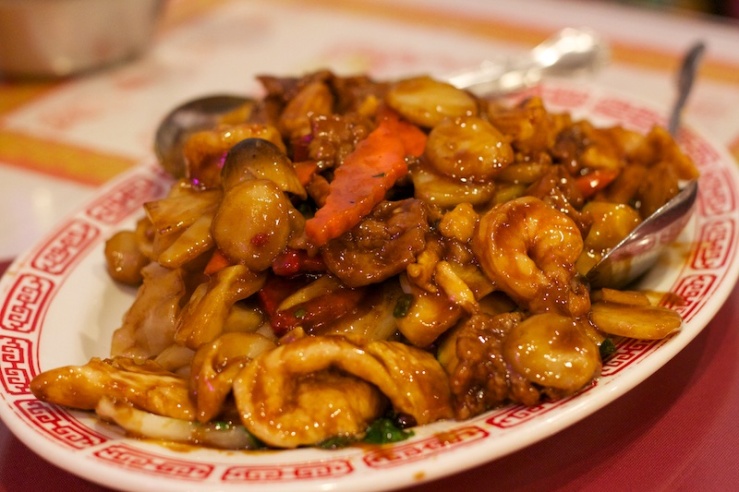 In general Chopsticks is good but I wasn’t blown away.  The service was a little slow at times, though they were friendly.  I saw some General Tsou’s chicken delivered to another table, and I kind of regretted not ordering it because it looked amazing.  I’m glad I ordered some new things, that’s a bit of what this whole mission is all about, but I do think some of my more usual orders would be very good here, based on the lemon chicken.  I think this would definitely be a good spot for lunch because from the menu description, you get pretty much the same thing as the dinner combo which was a good mix/amount of food.