For lunch today I made my second attempt at covering Denny’s Cafe for the blog.  The first time was successful, in hindsight, but at the time I felt I didn’t have enough for a full post.  This little diner is located on the north end of Vernon St. in-between Lincoln and Folsom.  They serve breakfast, lunch and dinner (though they close at 2pm on Sunday).  You can get typical American diner cuisine as well as Chinese dishes.

When I arrived for my first visit, a month and a half ago, it was a quiet Sunday and there was just one other customer.  He was sitting in the front corner reading the newspaper with a cup of coffee.  I thought he worked there, since the table was more of a kitchen table you’d find in somebody’s home and the TV antenna was sitting on it, but eventually he got up, paid and left.  I was left with the cook and the waitress who I’m guessing are the owners.

The interior is definitely on the old and worn side.  I wouldn’t say gross, but it’s certainly not clean.  It’s the type of clean where you only wipe down the parts that people can easily see.  I can imagine a lot of grime hiding in the corners here.  An electrical outlet in the corner is bursting with wires that take off in a few directions to power various appliances and lights in a way that doesn’t look like it would pass a fire marshall’s inspection.  The area behind the counter near the register is PACKED with personal and decorative items. 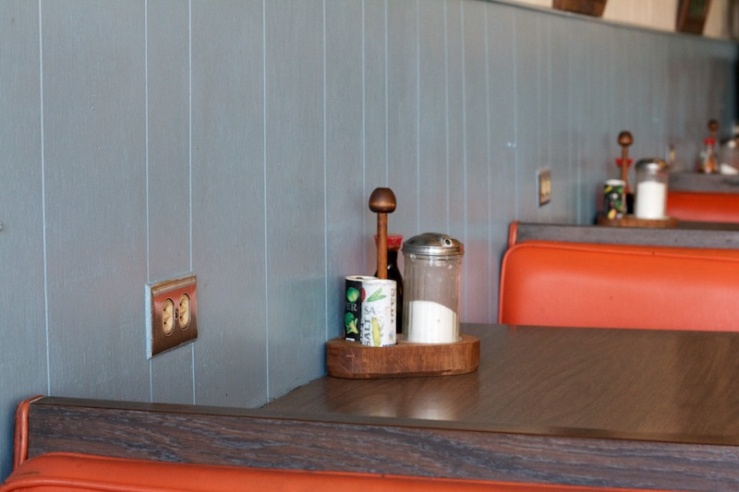 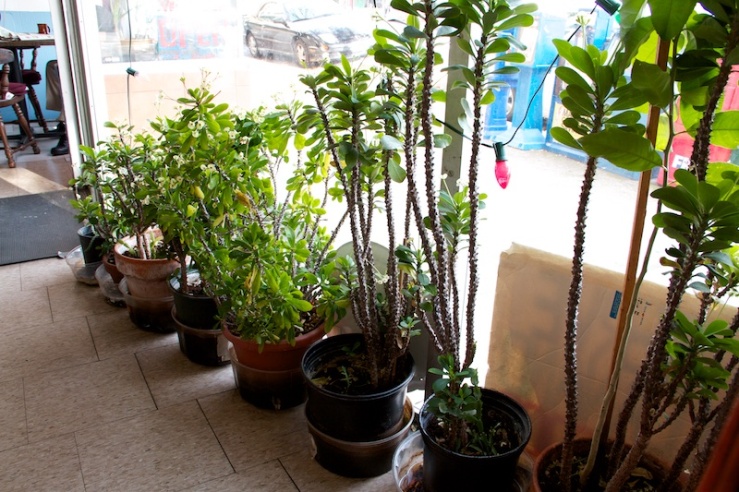 With the impression I had built based on these observations, I figured the service and/or food must be pretty great.  The waitress was friendly enough, but the service wasn’t anything beyond the minimum needed to take my order and serve me food.  I ordered the lunch combo of sweet & sour pork which comes with fried rice.  After putting in the order with the cook she returned to bring my drink, a can of Dr Pepper, with a cup of ice.  Normally when I’m given a cup of ice with a can of soda I don’t use it, because I don’t like it watered down even a little bit.  In this case the can was so filthy that even after I wiped the top down with my napkin I didn’t want to drink out of it.  I’ve also never seen this variety of Dr Pepper can with a yellow bar code before.  I’m not really sure I want to know where it came from, or where it’s been sitting and for who knows how long.  It did taste fine though, so there’s that. 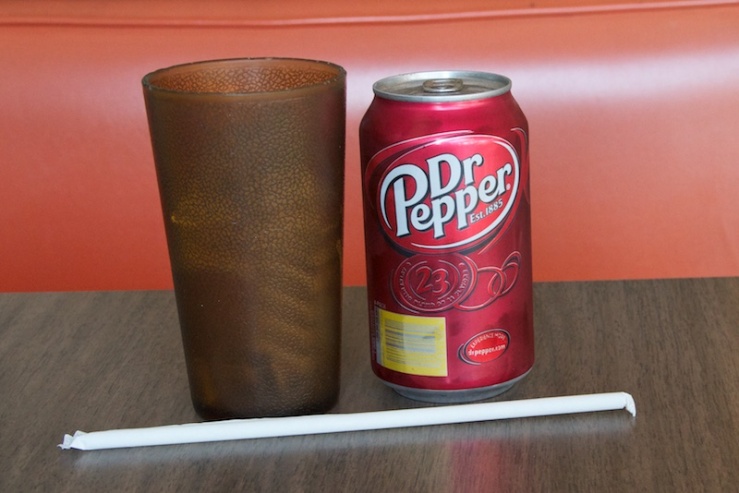 When my plate arrived it was steaming like crazy.  The large pieces of deep fried pork were covered with and sitting in a small lake of very hot and bright red sweet & sour sauce.  The fried rice looked more like brown rice.  I was expecting some veggies and egg mixed in but it was just steamed rice that was darkened up on the grill.  It had virtually nothing to it and I had to resort to copious amounts of soy sauce to make it edible.  The pork definitely had some flavor, just not what I had in mind when I ordered it.  The sauce wasn’t sweet at all, just sour.  Each piece was more batter than pork, and what pork was there did not taste good at all and was chewy.  A reviewer on Yelp described the meat in his meal as tasting like it was spoiled, and I think I would agree.  It was pretty nasty. 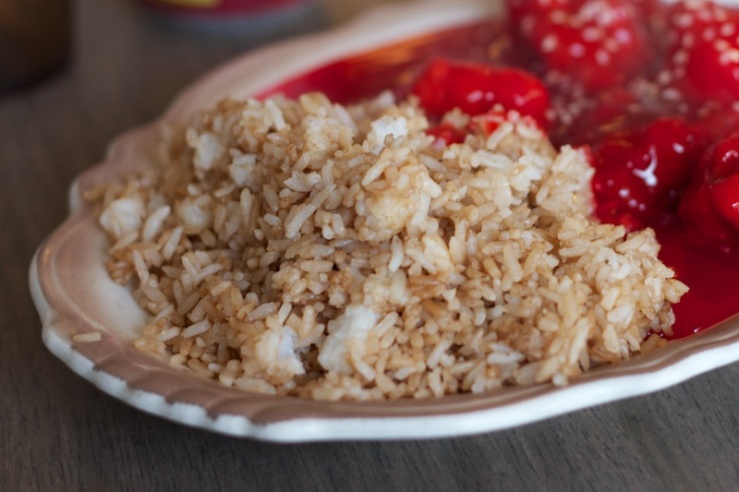 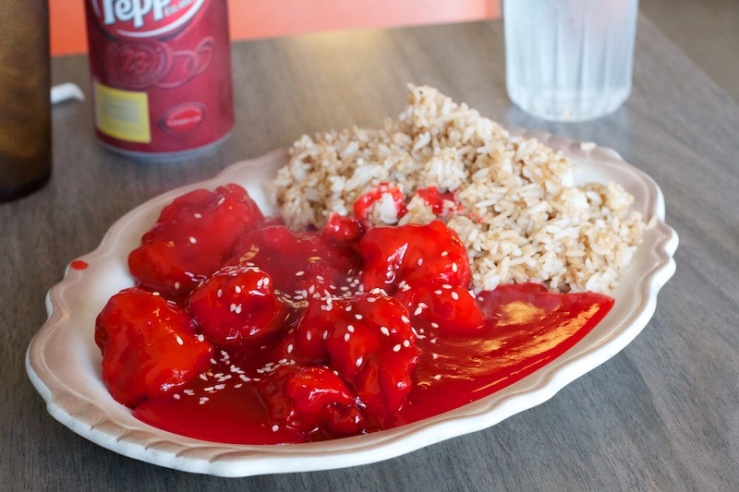 I didn’t want to write a post based solely on that experience in case it was a freak one-time thing (I hadn’t read other reviews yet), which is why I returned again today to try something off the American food side of the menu.  I went the relatively safe route and ordered the bacon burger plus cheese and fries. This time with my Dr Pepper (which was just as dirty as the first time if not dirtier) she brought a bottle of ketchup and 3 packets of mustard.  Not long after, my burger arrived.  The fries looked pretty good, and they were decent.  They were very crispy, just the way I like fries.  They did need ketchup though.  The burger was another story.  The bacon looked like it was going to be good, it was crispy and hot.  The burger patty was thin and was clearly the frozen variety.  The most disappointing part of this first impression was the american single that (barely) passed as the cheese.  The burger was hot, and it wasn’t particularly juicy or dry, but taste-wise it was the equivalent of licking a grill. 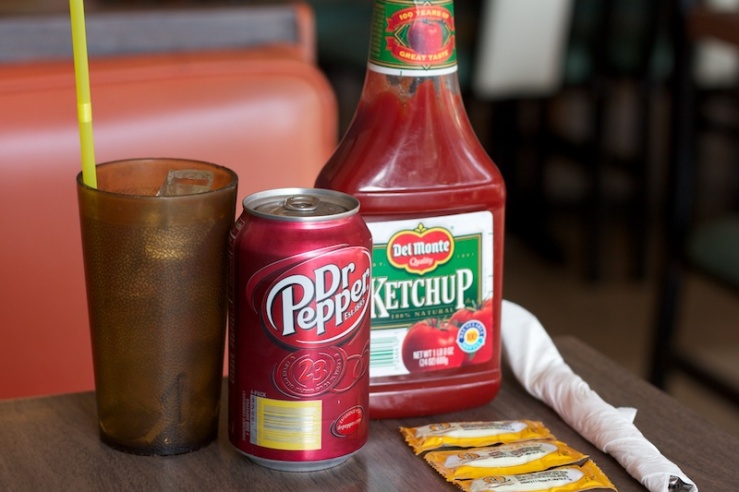 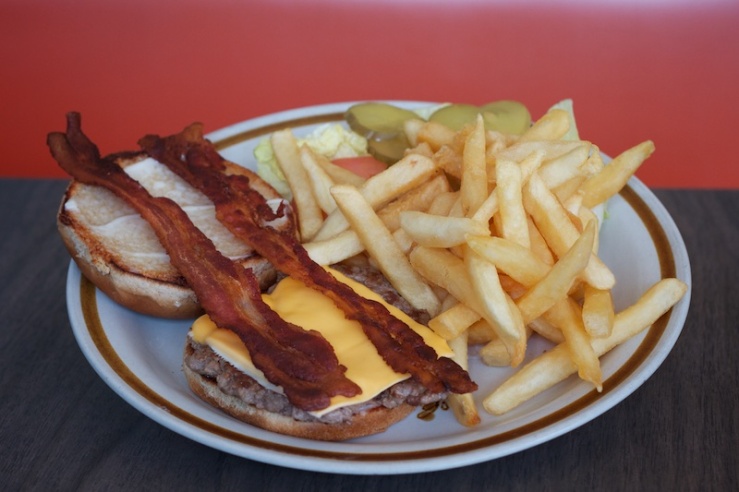 Unfortunately there just isn’t anything positive to say about Denny’s Cafe, even after giving it a second chance.  I nearly went with a 1 of 5, but even that’s too generous.  Go ahead and check out some (actually all) of the reviews on Yelp, I’m a little surprised they’re still in business.  Perhaps they do breakfast right, but I don’t really care to find out anymore.