After my visit to Sushi Unlimited I decided I was going to start trying something other than rolls when I go out for sushi. I did some reading online, asked for suggestions in Reddit’s sushi community, r/sushi, and started reading The Connoisseurs Guide to Sushi. It seemed like the things to try were sashimi and nigiri and I was given recommendations on specific kinds of fish to start with. Last week I had a later than usual drive down sunrise during the middle of rush hour traffic. By the time I got back into Roseville I was pretty hungry and pulled into the Sushi House parking lot. They are located on Sunrise in the same little shopping center as the Glass Turtle, across from Bob’s Car Wash.

Inside this smallish restaurant they have high-backed booths around the outside, tables in the center and the sushi bar at the back. There were a few tables seated when I walked in but no one at the bar so I took a seat there. I picked up the 2 sided menu they had sitting at the bar and was just starting to go over it when the waitress came and took my drink order of a draught Kirin. I took my time looking over the menu and before I had made any selections my Kirin and a bowl of miso soup was delivered. 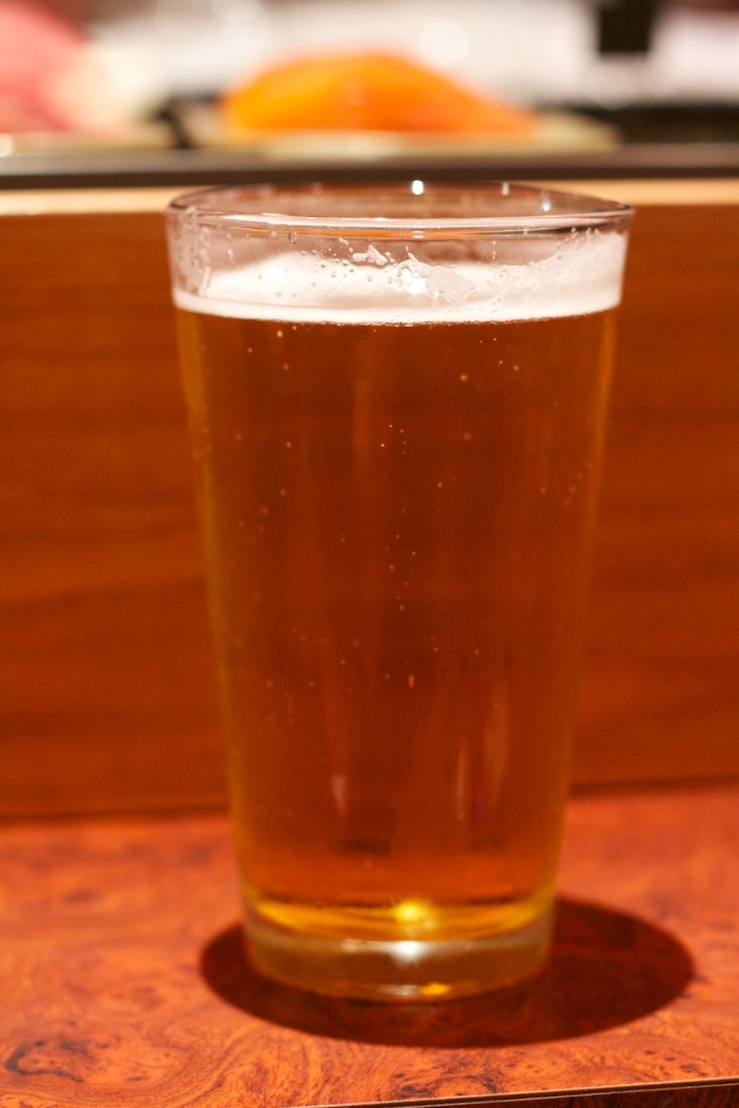 There were two sushi chefs working the bar this night, one that looked about my age and an older one. The older chef asked what I would like and I went with a single order of hamachi (yellowtail) nigiri. This was prepared fairly quickly while I drank my soup and then handed to me over the bar by the chef. One of the things I read about how to eat various types of sushi was that only the fish should be dipped in soy sauce, not the rice. I didn’t know if that meant I was supposed to remove the fish from the top, dip, and then put it back, or to flip the whole piece upside-down and dip it. I removed the fish, but I’ve since learned that this is not the correct way to do it.

The hamachi was good. Very light and subtle white fish flavor. Next up I decided to go with salmon. One of the recommendations I received was to try fatty salmon, or sake toro, if it was available. I did see toro on the menu but they had it described as a type of tuna. First I asked if sake was pronounced the same as the rice wine drink of the same name, which the younger chef confirmed was correct. Then I asked if they had sake toro. He repeated this to the other chef who responded in Japanese (Korean?), they both chuckled and then the younger chef said “no”. I’m not sure what was funny to them, my question, pronunciation, or something completely unrelated. It didn’t feel very friendly though. I asked for just regular sake nigiri. 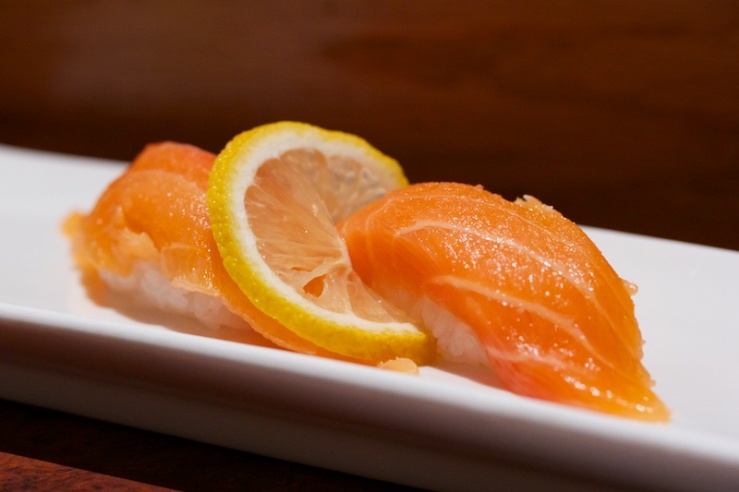 I’m not sure why, but I can’t stand cooked salmon. It’s one of the few things I avoid. I don’t like the smell, texture or flavor. But raw salmon? I’m all over it. This was excellent. I brushed the lemon slice over one of the pieces and it was very pleasant. Last up for my nigiri orders I asked for one that, again, they did not have. I asked if he could recommend another choice and he suggested shiro maguro (albacore tuna or white tuna). As the chef prepared this I saw him squirt a soy sauce-looking liquid on the fish before setting it atop the rice. These two pieces had just a hint of tuna flavor. A minute or two after finishing them I could feel a light burning on my lips, so either the sauce he put had something more to it or there was a good amount of wasabi hidden between the rice and albacore. Either way, it was good.

To end the meal I ordered none other than the Roseville Roll. Shrimp tempura, avocado, cucumber and unagi. The shrimp tempura was reheated in a toaster oven that was on the counter to the left. That was pretty disappointing to see. It’s entirely possible that this is normal practice at all sushi restaurants, but I’ve never seen it done right there in plain view before. The end pieces had some crunch to them but the shrimp in the middle of the roll was more soggy. The flavor overall was great though, and I might order it again if I were to return. 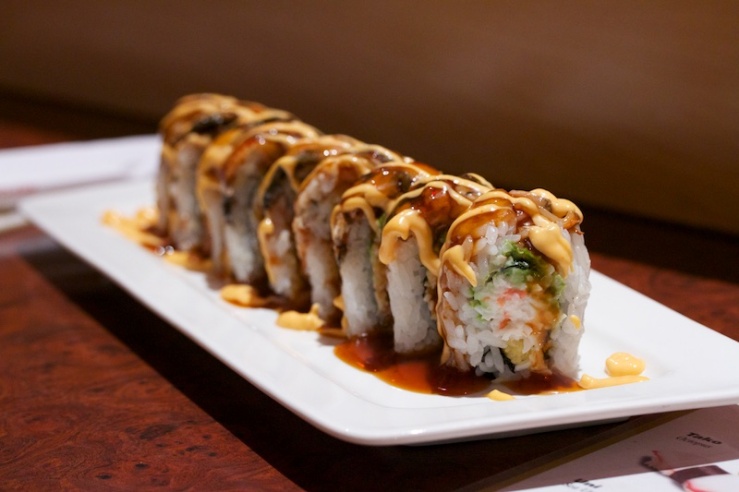 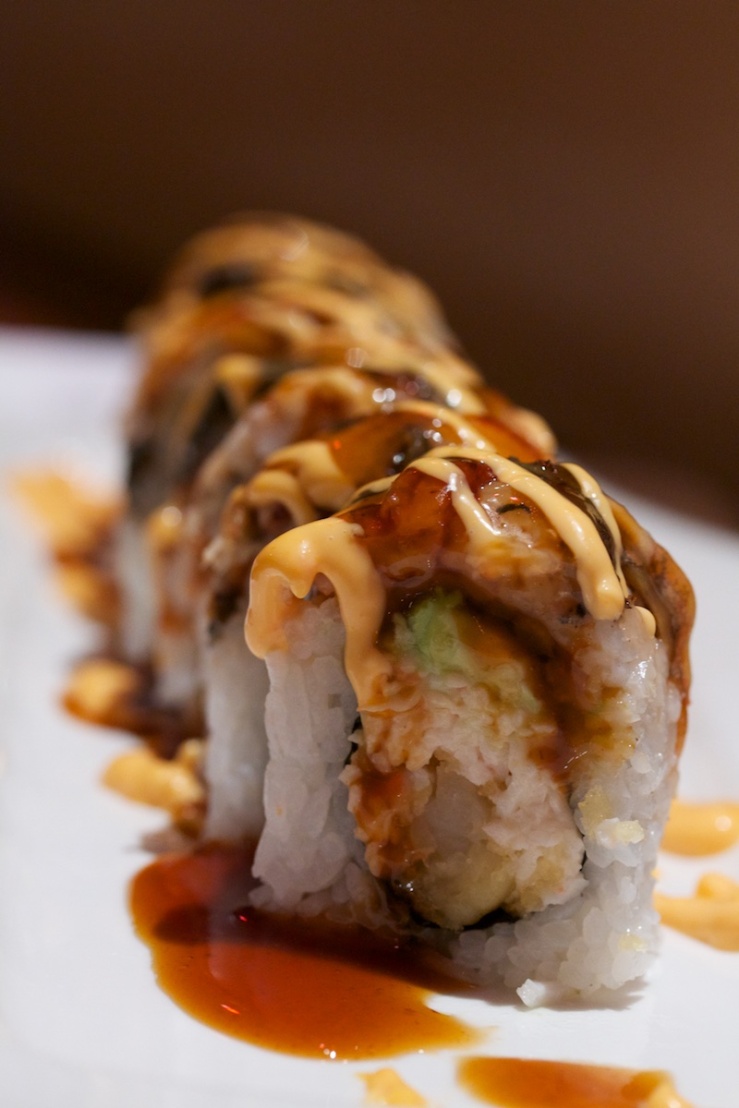 Food-wise, Sushi House is pretty good, there wasn’t really any problem, everything was fresh and tasty. The waitress was nice and attentive in clearing empty plates and offering more beer. I was kind of put off by my interaction with the chefs though. They seemed a little annoyed by my questions and I felt like the thing they laughed at was probably me. I might have that totally wrong but it’s the impression I was left with and that alone will likely have me going to one of Roseville’s many other sushi restaurants before returning to this one.  With that I would say a 3 of 5 is what I feel Sushi House deserves.