I have a confession to make, I had my first ever cheesesteak just a month ago.  I have no idea why it took so long.  I wasn’t avoiding them, it just didn’t happen.  My introduction to this awesome sandwich was at Grand Central Grill in Rancho Cordova.  It was incredible.  Now, I move on to my next cheesesteak at Milo’s Cheesesteaks & Gyros.

This little shop is located at Foothills and Pleasant Grove in the same shopping center as Los Cabos Grill.  The dining area is quite small, maybe 8 tables total on the inside and a couple outside.  They were empty when I arrived but 3 families with children had arrived before I left and it started to get a little cramped.

When I walked in I wasn’t sure if I should get a cheesesteak or a gyro.  I considered getting one of each, but it was a good thing I didn’t because I ended up leaving stuffed with the cheesesteak combo and dessert as was.  They have a good selection of cheesesteaks on the menu (I scanned a copy of it here, they don’t seem to have a website).  Instead of the basic “model” I chose the Steak Da Works (grilled onions, bell peppers, mushrooms, hot cherry peppers and cheese) and made it a combo by adding fries and a soda.  Right before I paid I noticed a display of baklava on the counter and ordered one of those as well.

The cashier was very friendly and helped a couple families rearrange some tables so they could sit together.  My food was brought out in just about 5 minutes.  It was a bit lopsided, most of the cheesesteak innards were on one side, but altogether it was a good sized sandwich.  The fries were very hot and were a bit crunchy (which I love). They had a very light seasoning that I could see.  They were great with and without ketchup.

The cheesesteak was excellent.  It was hot and steaming when it arrived.  Every ingredient was flavorful and fresh.  The hot cherry peppers added a heat that was intense, but not in a way that compromised the flavor.  If you like hot/spicy food I highly recommend this cheesesteak.  You get the heat and can still enjoy everything else it has to offer.  The only thing I would say can be improved here is possibly a bit more cheese.

I was feeling close to full but my baklava was still waiting for me.  It was a sticky, flaky, delicious little thing with a strong honey flavor.  These aren’t on the menu which makes me think they just make a small batch and when they’re out, they’re out. So get one! 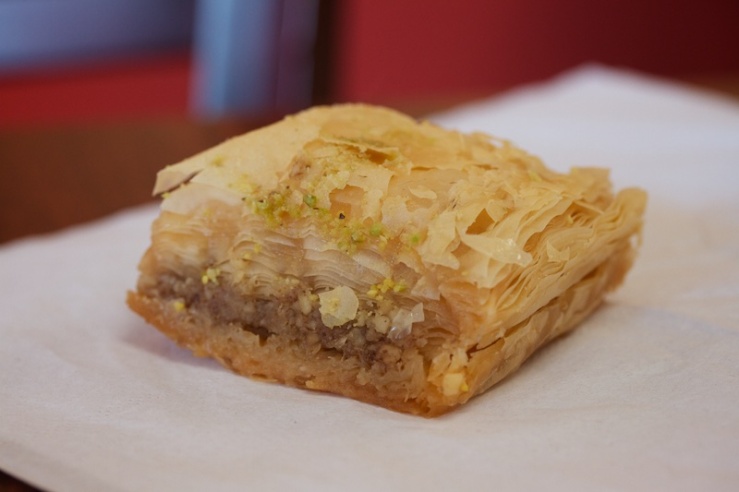 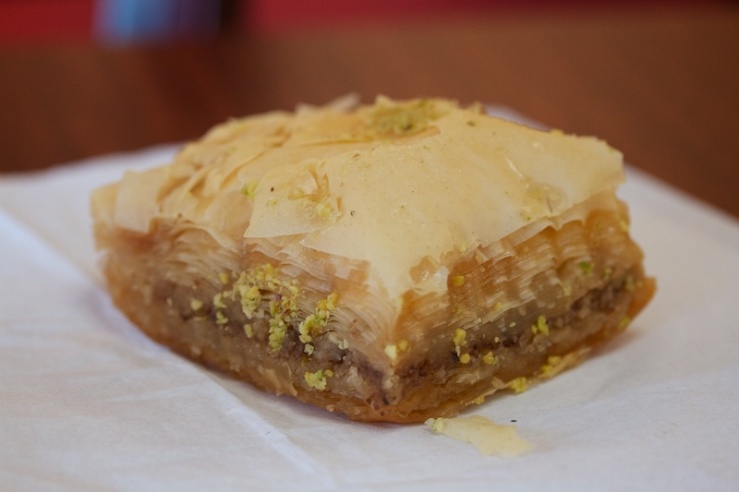 I was really happy with this visit and I intend on returning to go the gyro route.  I’ve only ever had gyros at Daphne’s, and I’m sure a place like Milo’s could blow them away if given the chance.