Swagat Indian Bistro is hidden away in a mostly vacant business park at the corner of Sierra College Blvd and Eureka and just barely within Roseville’s boarders.  I only recently learned about it from a Sac Perks coupon deal.  My parents also bought the coupon and wanted to check it out, which worked out great since dinner is family style. 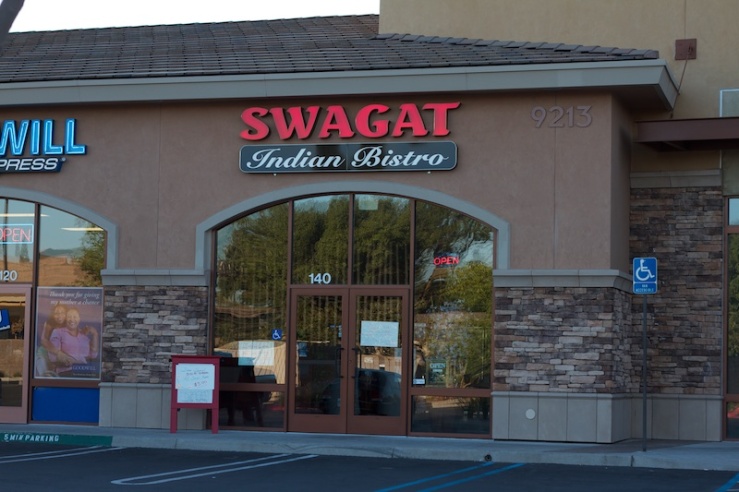 We arrived a couple minutes before 5pm and discovered they close for a short period between their lunch buffet and dinner.  The cook noticed us at the door and let us know it would just be a moment, then disappeared inside through another door near the front.  About a minute later our server to be let us in and got us seated.  Swagat is a pretty large restaurant (It looks much smaller from the outside, but it appears they’ve leased two units and combined them) and is nicely decorated.  They have a bar area, though they only appeared to serve beer and wine. 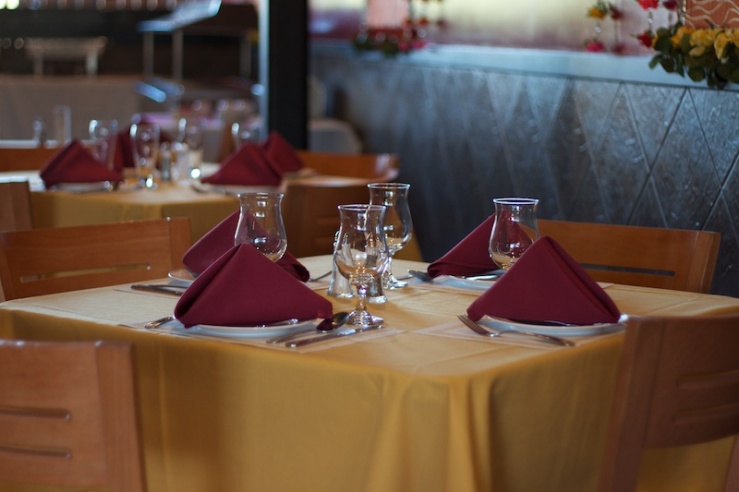 The menu was fairly large and slightly daunting, as I had only had Indian food maybe once before, but our server was very patient and helpful with answering questions.  My mom had been to the lunch buffet once or twice and knew that she liked the butter chicken, so that was an automatic entree choice.  I ordered a Blue Moon while we picked out a couple of appetizers and some naan.

Just before bringing the naan and appetizers out, our server brought to the table a trio of chutneys (condiments).   One was mint and green chili with a bit of yogurt (Frontmost) which had just a bit of spiciness to it.  This was my favorite.  It went great with both the spinach naan and vegetable pakora.  The second (far back) was the tamarind chutney which was described (accurately) as having a sweet and sour taste.  I thought this was best with the paneer pakora.  The last was a house chutney that was made with pumpkin and garlic.  It was pretty good, although I think it might be better with different appetizers.

The spinach naan was ok, I think it could have used some more spinach.  You can see it, but it mostly just tasted like flat bread.  The bread was good though, and even better with the mint chutney.  I’ll definitely be ordering naan again but I’ll try a different one next time.

The paneer pakora was a little strange.  My parents seemed to like it but I wasn’t crazy about it.  It was kind of bland and needed the tamarind chutney in my opinion.  The texture was very much a dense cottage cheese with a light, mostly tasteless batter. 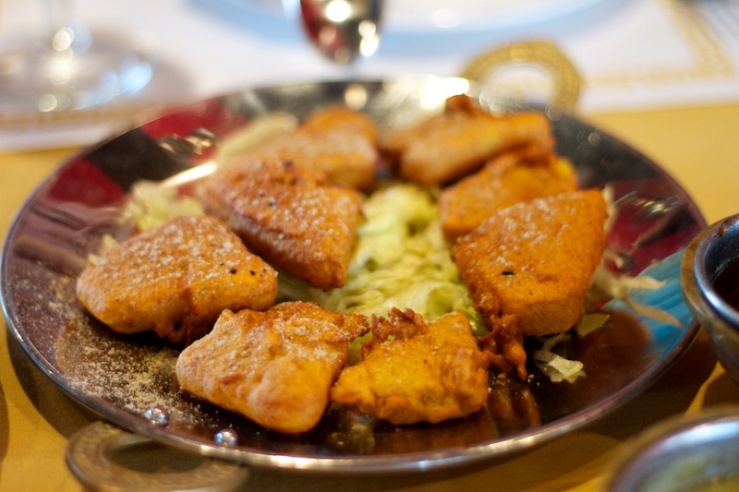 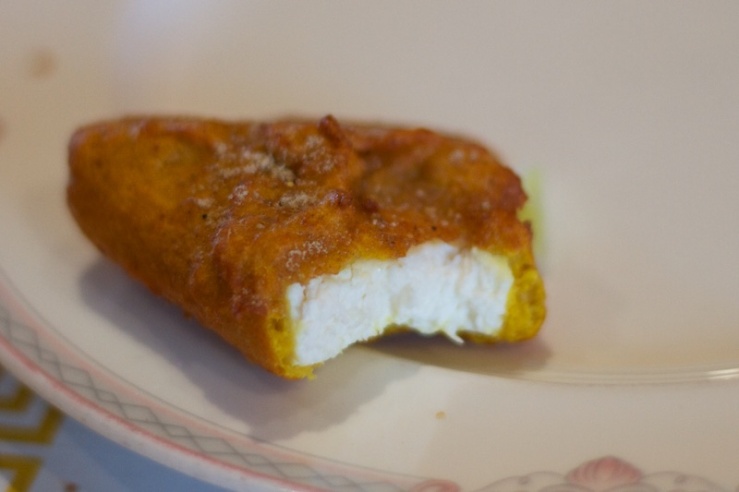 Finally the vegetable pakora.  The vegetables were blended together, battered and fried.  They were very good, but the batter (also good) definitely dominated the flavor.  The mint chutney was great with this. 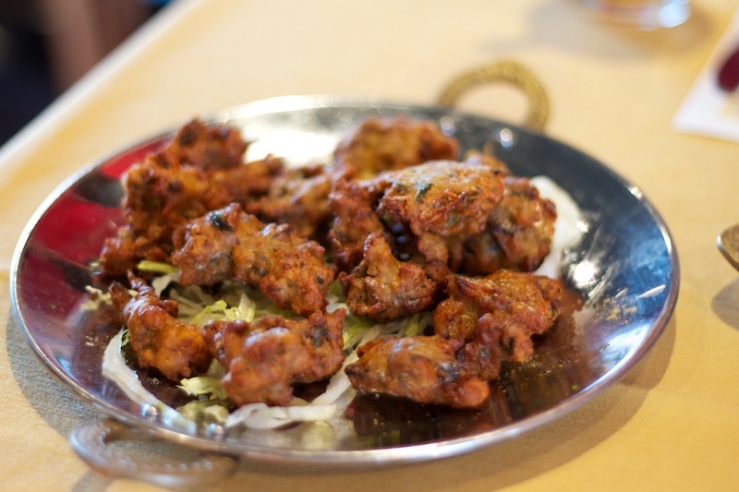 For our main dishes my mom picked the butter chicken (tandoori-roasted, chicken pieces simmered in tomato cream gravy), my dad picked tandoori chicken (chicken with bone, marinated in yogurt, ginger, garlic and garam masala, then skewered and cooked in the tandoor) and I picked the lamb pasanda (lamb in a mild cashew cream sauce.  My mom isn’t big on spicy foods so when we were asked the level of spice we wanted for everything we chose mild.  Rice was served with the butter chicken and lamb pasanda.

I wasn’t sure what to expect when I saw the bright red color of the butter chicken, but it was amazing!  Rich and creamy with a bit of tomato flavor and moist chicken pieces.  This is a must-have.

The lamb pasanda was served similarly in a bowl to be put over rice.  It was also very, very good.  My mom said she hated to admit it, but that she liked it a lot (she wasn’t totally on board with a lamb dish from the start).  It was also rich and creamy.  The lamb flavor was not overwhelmed by that at all.  I would definitely order this again. 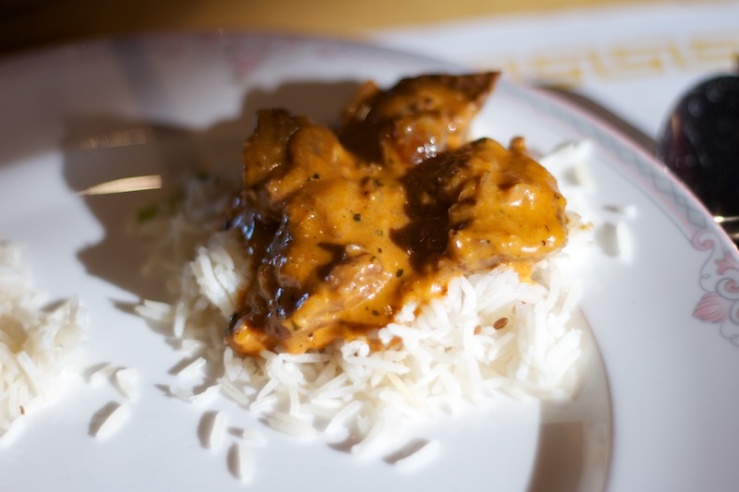 The tandoori chicken was brought out to the table a few minutes after the others and was sizzling loudly on a hot cast iron skillet like fajitas.  The red coloring was very nice looking and the whole presentation was pretty exciting.  Unfortunately the chicken turned out to be pretty dry and lacking in flavor.  It was like BBQ chicken that had been left on the grill just a bit too long and not marinated enough or at all.

I decided to give on of the deserts a go and ordered the kheer (slow cooked rice in sweetened milk).  The texture was pretty interesting, but I wasn’t too into it overall.  It was kind of sweet, but not nearly as sweet as I had expected, and there was just the tiniest hint of sour there.  I’m not sure if that’s normal or not.  I didn’t finish it. 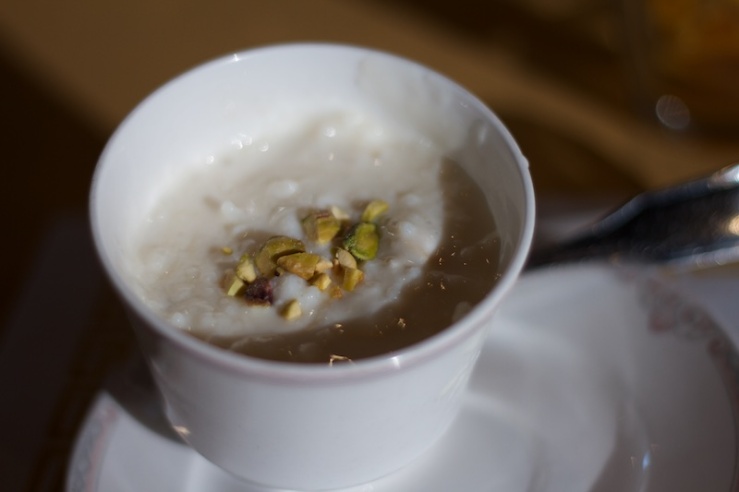 So overall there were definitely some hits and misses here.  I think that the butter chicken and lamb pasada on their own are enough of a reason to come back and try some other dishes.  They were fantastic and I can’t stop thinking about them.  One thing we noticed was the lack of customers (just one other table) during the Sunday night dinner, but hopefully that was just due to the labor day weekend because I definitely hope they are able to survive in that lonely business park.