This was my first venture into Vietnamese food.  Once again my parents joined me to try something new.  Bo Bo Cafe is a located on Douglas in the shopping center where Mervyns use to be.  There were a few tables filled when we arrived and they were all finishing up their lunches.  The restaurant was nicely decorated and very comfortable.

We were sat right next to the occupied tables, which was a little awkward since the rest of the good sized dining room was empty, but they ended up leaving before we even ordered.  We got to perusing the menu.  Under our table’s glass top there was a couple articles from the Sacramento Bee featuring the cafe.  I had always thought that Vietnamese cuisine was mostly soup based, but soups made up just one page in the front.

We started with the pork rolls appetizer.  I couldn’t detect any pork flavor, but they were very light and tasty with the peanut sauce that they came with.  I would definitely order them again. 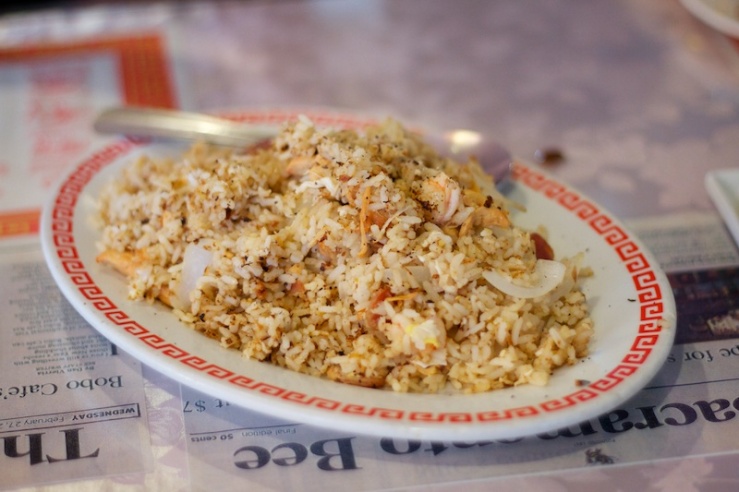 The rice was the first to arrive and was excellent, probably some of the best fried rice I’ve had.  It had onions, chicken, something that resembled a dry sausage, egg and shrimp.  It was hot and very fresh. 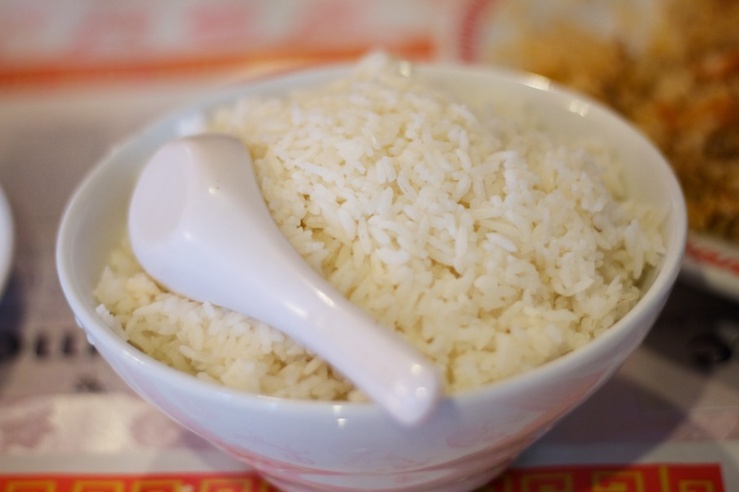 After we had mostly devoured the rice the main dishes quickly started to arrive.  My spicy curry chicken wasn’t at all spicy, but the curry flavor was great and the chicken tender and juicy.  Steamed rice was served with it and the sauteed pork dish.  The pork was ok, but the chili sauce that covered the entire plate was pretty delicious.  A common theme between both of these dishes and the rice was lots of onions.  Don’t get me wrong, I do love onions, they just really stood out.

My mom’s bowl arrived last (but long after the others).  It did look nice, but was disappointing overall.  The pork was very dry, there were only two shrimp, and while the noodles had great texture (I tried them out after she finished), they were mostly flavorless and boring.  I put some of the remaining peanut sauce form the pork rolls on top and it was quite good.  She said the spring rolls were pretty good, but overall the bowl needed some kind of sauce.

One thing I should mention was the service.  Our server (he might have been the owner or manager, not really sure though) was not exactly polite, but I wouldn’t say he was rude either, he just wasn’t very personable.  Briefly a woman (the cook perhaps?  His wife?  No clue…) made an appearance from the back to bring out a dish.  She seemed nice, smiled and asked if I wanted a refill on my soda.  She came back later once more to refill it again.

So overall I’d say my first Vietnamese meal was pretty good.  I very much enjoyed both the pork rolls and curry chicken, and of course the rice was awesome.  I’m interested to come back and try one of the soups.  Actually there’s a new Vietnamese restaurant that just opened next to Beach Hut Deli out in Lincoln (a friend owns/operates the Beach Hut and I’m out there several times a month to eat and visit), so maybe I’ll check that out to try some soup.